The colored gemstone industry has traditionally been dominated by small miners and individual traders or very small firms. This brings an entrepreneurial spirit to the industry, but these smaller businesses lack the resources needed to effectively promote gemstones in a highly competitive retail environment.
GIA senior industry analyst Russell Shor spoke with Ian Harebottle, the CEO of Gemfields, a large, publicly held gemstone mine, about the company’s efforts to use advertising and promotions to lift the entire industry.
“Gemstones are incredibly beautiful,” says Gemfields CEO Ian Harebottle. “But their real value is revealed by designers’ artistry and strong marketing.”
“Otherwise, they are just placed on a scale and sold by the carat and the cheapest dealer wins,” he says. “[That’s when] these magnificent and rare gemstones lose out.”
Harebottle says Gemfields is trying to move beautiful colored gems off the scales with an initial $5 million marketing campaign to instill more glamour and excitement ‒ such as asking actress Mila Kunis to be the new face of Gemfields. He refers to what De Beers’ “Diamonds are Forever” advertising campaign has done for diamonds – and points out that colored gemstones, after all, are also forever.
Kunis, who starred in Disney’s “Oz the Great and Powerful,” has succeeded in getting the jewelry-shy fashion press writing about emeralds. The company is working with designers and jewelers in key markets around the world to showcase emerald jewelry. It also recently acquired Fabergé and is in the process of reviving the name as a luxury jewelry brand.
Colored gems have never had a serious, sustained marketing campaign. De Beers was spending $220 million a year back in the 1990s, so Gemfields has a long way to go. But, Harebottle adds, “One requires a lot less cash, time, and effort to sell and market a color TV than you would to sell a top-of-the-line black and white unit.”
Gemfields is trying to address other challenges that have worked against the gemstone industry over the years: The fragmentation of the colored stone industry has created a number of barriers to its growth: inconsistent supplies (many gem sources are short-lived and mined by hand, creating a great deal of waste); lack of capital (very small firms generally do not qualify for bank financing); and lack of a unified product (dealers have traditionally promoted only the types of gemstones in their own inventories).
Gemfields controls the largest emerald deposit in Zambia and is an anomaly in the colored gemstone industry, which is largely comprised of thousands of very small enterprises. The company is publicly traded, with revenues of nearly $84 million last year, and believes it has the tools to put emeralds in the public eye: a relatively large marketing budget of $5 million, a brand presence through the Fabergé acquisition, and a diverse portfolio of gemstones.
This portfolio includes:
The Montpuez deposit is still in its early stages, so emeralds represented the vast majority of Gemfields’ revenue for fiscal 2012 and remained the focus of its marketing activities.
Harebottle says Gemfields is addressing the supply challenge by maintaining a one-year stockpile of Kagem emeralds of various sizes and qualities, with plans to do the same for its other operating mines.
“Jewelry designers and manufacturers need continuity of supply if they are going to produce and market lines effectively,” he says, noting that about 60% of them are in the Far East and Middle East and the remainder in the U.S. and Europe.

The company has encountered challenges from its partner. In the spring of 2013, the government required Gemfields to hold all rough stone auctions within Zambia’s borders instead of its customary location in Singapore. Government officials claimed that the auctions abroad were a revenue drain.
The company held its first Zambia-based auction in Lusaka in April, shortly after the government measure. Sales were lackluster, prompting worries that the big international buyers would not travel to Lusaka for the larger sale in July, featuring the best material.
Harebottle’s fears were put to rest, however, after the auction realized $31.5 million. The 583,448-carat sale brought $54 per carat, about $11 more per carat than the previous year’s event in Singapore. (If $54 per carat seems low, it’s because the average yield of gem material from the rough is about 5%, with the very best pieces yielding about 10%.)
The centerpiece of the sale was a crystal weighing more than 2,000 carats purchased by Eshed Diam, an Israeli emerald cutter. The price was not disclosed.
Avraham Eshed said in a statement that the bidding for the stone was “extremely competitive,” with more than 40 companies participating.
These results, Harebottle says, “were spectacular, but the key now is to make sure that whatever we do serves only to continue the momentum and growth in demand that we have achieved over the past few years.”
Harebottle is also heartened by the improved communication between his company and the Zambian government since then, noting that many senior government officials attended the July sale. More recently, he says, Zambia has opened up to the possibility of alternating sales venues, with the stipulation that Lusaka remains one of the sites. This idea has Harebottle’s full support.
Gemfields does have its critics. Some claim the company is edging local artisanal miners out from the best concessions around Kagem and the Montpuez deposit. Harebottle counters that Gemfields has never displaced any local miners and maintains an assistance program for them, including access to its medical facilities. He says that those who level such criticisms have an agenda of their own – namely dealers who pay these miners very little for their finds, pay no taxes or export duties, and reap huge profits by selling the gems in the world market.
“Ultimately, we are trying to raise world demand ‒ and prices ‒ for colored gems,” Harebottle says. “Local miners can only benefit from that.” 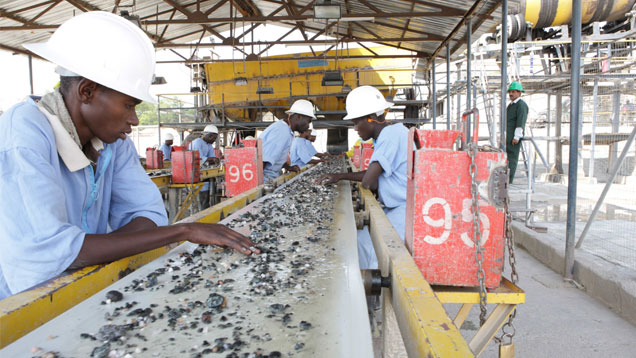 Workers at a Gemfields washing plant.
GIA does not endorse any specific commercial product or company.