In July 2013, GIA’s Shane McClure, director of West Coast Identification Services in the Carlsbad lab; Duncan Pay, editor-in-chief of Gems & Gemology; and Robert Weldon, manager of photography and visual communications, traveled with videographer Kevin Schumacher to the remote southeast corner of the U.S. state of Oregon to visit three of the region’s sunstone mines. The team spent five days interviewing the miners and photographing/filming each mining operation. They also collected gem and rock samples for future research, which will be published in Gems & Gemology.
The unique nature of the gems and the harsh, yet beautiful high plains and desert landscape left an indelible impression on all the trip’s participants.
“The contrast between the tall trees at the Ponderosa and the broad, wide valleys and dark rolling volcanic hills near Plush was striking, although both areas have a rugged, distinctive beauty of their own,” Schumacher said.
John Woodmark of the Ponderosa Mine couldn’t agree more, which is why he and his team work so hard to protect it.
“It’s a pristine area, it’s beautiful,” he said. “It’s wonderful just to come up here, let alone find a truly exotic gem like Oregon sunstone. We’ve got over a million board feet of huge ponderosa, most of them in the 250- to 300-year-old range, and we’re trying very hard not to disturb any of those trees and still get the same stones that we need to mine.”
Sunstone is a rare and exotic American gem. That’s what makes mining more than a commercial activity for the people GIA met on this trip, Schumacher said.
“It’s a passion, and a way of life ‒ they’re working hard to make Oregon sunstone a mainstream gem, one that enlightened consumers will ask their jewelers for. I’d never given much thought to sunstone before, but now I realize it’s a genuine treasure ‒ right on our doorstep.”
See the Field Report on Oregon sunstone in the Fall 2013 issue of Gems & Gemology, which includes Schumacher’s videos of mining activities and conversations with the dedicated souls that mine Oregon’s beautiful state gem. 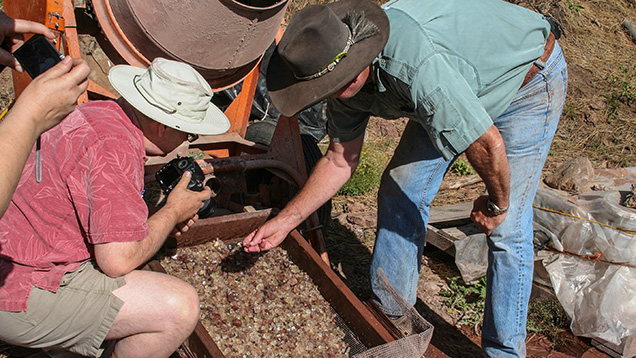 A miner shows the GIA team the production from one of the sunstone mines visited. Photo by Duncan Pay/GIA.

The story behind
the story

A Sunstone Odyssey Part 1: The Ponderosa

The series concludes with a report on a new location for large green and bicolor gems.
Read More