When you travel the world researching the industry, from time to time you experience a moment that you realize could be historic. This was the case in Singapore, where the first Gemfields rough ruby auction was held, with material from the Montepuez ruby deposit in Mozambique. While watching the buyers go through the lots offered for bidding, while at the same time observing the auction’s expert organization, we knew we might be witnessing the dawn of a change in the way the ruby industry does business.

The inaugural Mozambique ruby auction in Singapore has the potential to alter how rubies change hands in the market. Photo by Vincent Pardieu, ©GIA.
The auction marks a turning point in the way rubies are coming into the market. For the past 20 years, the Mong Hsu deposit in Myanmar (formerly Burma) was the world’s main source of rubies. Today, most of the rubies found in gem markets in Thailand (the global hub for ruby trading, processing, and cutting) come from the Montepuez area in Mozambique. Since the 2009 discovery of ruby deposits there, Montepuez has emerged as the world’s most active ruby mining area—though the stones that have reached the market thus far have all been mined illegally and smuggled out of Mozambique.

Now, for the first time, the legal owners of the mining license in Montepuez have introduced their product into the marketplace at auction. This development has stirred up excitement (leavened with some fear) in both Thailand and India, signaling as it does a seismic shift in the way rubies will enter the market. This groundbreaking event took place between June 12 and June 17, 2014. It was held in Singapore, considered one of the world's easiest countries for doing business. The source of the rough was Montepuez Ruby Mining Limitada. Gemfields had proposed acquiring a 75 percent interest in this deposit on June 8, 2011, and completion of the acquisition was announced on February 27, 2012. A 25-year mining license was issued at that time. Bulk sampling began in November 2012. By March 3, 2014, the mine had produced 8.2 million carats of ruby and other corundum. As of the auction date, Gemfields’s total expenditures at the Montepuez mine had reached US$34 million, including costs of acquiring the mining rights. 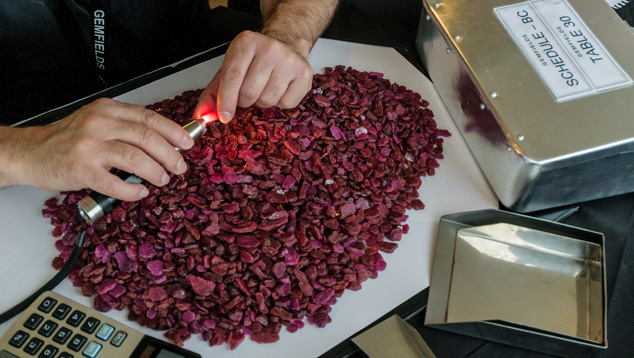 The bulk sampling by Gemfields of the Montepuez ruby deposit produced parcels of rough for auction that covered a wide range of qualities and sizes. This parcel contained 6,820 grams of untreated ruby rough. Photo by Vincent Pardieu, ©GIA.

Gemfields (GEM) is a publicly traded company listed on the AIM market of the London Stock Exchange, where it is a constituent of the AIM50 index. In July 2008, the company acquired a 75 percent interest in the Kagem mine in Zambia, one of the world’s principal emerald-producing mines. In July 2009, Gemfields held its first rough emerald auction. Since then, the company has held 15 auctions of rough emeralds from its Kagem mine as well as two auctions of emeralds from other sources. Its total revenue for all emerald auctions to date is US$282 million. All together, sales for the financial year ending June 30, 2014, including emerald rough as well as ruby rough from the June auction, exceeded US$143 million.

Gemfields also owns other mining interests, including 50 percent of the Kariba amethyst mine in Zambia and licenses in Madagascar for ruby, sapphire, and emerald deposits. Gemfields acquired the Fabergé luxury jewelry brand in January 2013, giving the company a position in the luxury colored gemstone market.

At the auction, the GIA team examined and evaluated several ruby lots offered for sale. We also interviewed Gemfields staff directly involved in the grading and creation of the lots and in setting up and operating the auction, as well as more than two dozen auction attendees. 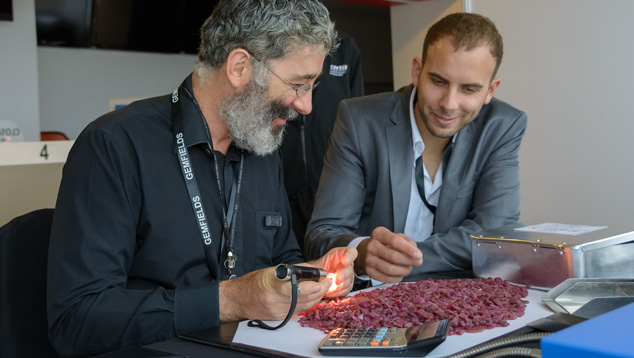 The GIA team spent many hours examining the parcels of ruby available at the auction. Vincent Pardieu is evaluating a rough ruby parcel with Assistant Product Manager for Montepuez Ruby Mining Philippe Ressigeac. Photo by Andrew Lucas, ©GIA.
As a result of their emerald auctions, Gemfields is very experienced in auctioning rough gemstones, so the actual viewing and buying process was no mystery to most of the buyers. Gemfields followed the auction process as previously, refined over the years by inviting attendee feedback. Even some attendees who were new to the Gemfields system had an idea of what to expect at this auction. 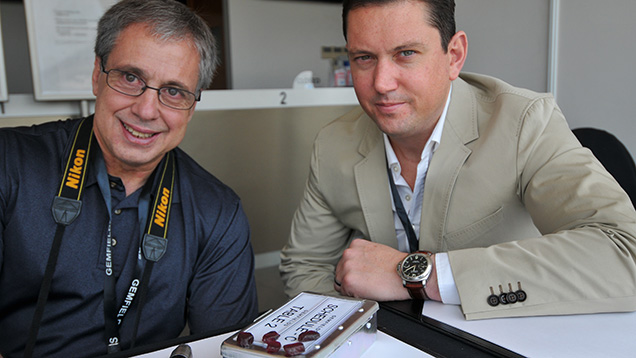 GIA’s Andrew Lucas (left) consults with Gemfields Product Director Adrian Banks. Photo by Vincent Pardieu, ©GIA.
About 60 different companies attended, mainly from Thailand and India, but Gemfields also invited firms from the United States, Germany, France, and Switzerland. Most of the buyers were interested in how the lots were graded and arranged. The overwhelming feedback we received was that Gemfields did a very good job, considering this was the first time they had graded rough ruby parcels. All the buyers we spoke with felt the grading and lot organization were good, and most were very pleased. While some buyers would have made some changes to the organization of the lots, they all said any such changes would have been to suit their own business models. They felt the organization of the lots was fair for both the buyers and Gemfields’s interests. 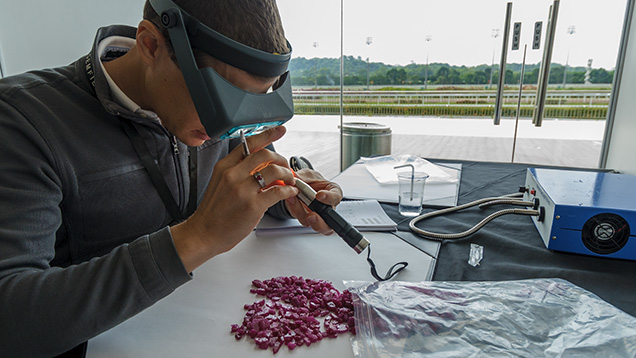 Buyers spent considerable time grading and evaluating the rough ruby parcels at each booth before placing their bids. Photo by Vincent Pardieu, ©GIA.
At the Montepuez deposit, Gemfields recovers both primary and secondary ruby rough and uses two grading criteria, one for each type of deposit. Generally, the material from the secondary deposit is cleaner than that from the primary deposit. Gemfields said it took an average of two weeks to sort a lot of high-quality ruby rough, and six weeks for low-quality ruby rough. Gemfields grades rough by color, clarity, size, and shape. The Montepuez deposit produces ruby rough of all qualities for all market sectors: premium stones fine enough to be faceted without treatment, rough material to be heated with or without flux, and rough material to be treated with lead glass.

A few of the buyers interviewed also regularly attend rough ruby auctions in Myanmar. It was interesting to hear them compare the two auction systems and how the differences affected their buying. They all said the Gemfields auction featured more sophisticated grading criteria, and the lots were better organized by size and quality. Far more lots were offered there than at the Myanmar auctions, and they were broken down into narrower categories of detailed size and quality ranges.

Unlike Singapore, the Myanmar auction allows bids to be placed on one lot at a time. The results are declared before bids have to be submitted for the next lot. This allows buyers to know if they were successful on the first lot before bidding on the next lot, and so on. At the Gemfields auction, buyers had to submit bids for any lots they were interested in ahead of time. This meant buyers had to place bids on lots knowing that they might exceed their available capital if they were successful on most of their bids. 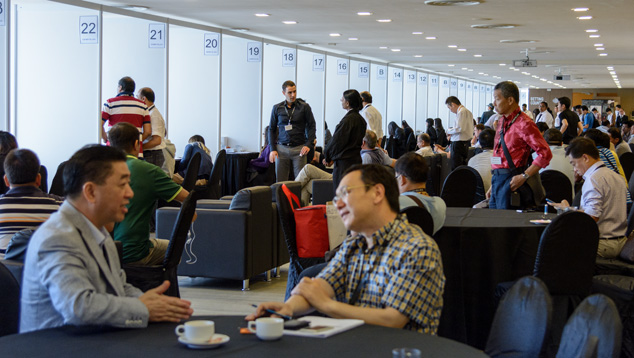 The Gemfields auction offered 32 tables in white booths, with daylight and torches available for examining rough ruby parcels. Buyers waited at tables for their turn to examine their chosen parcels. Photo by Andrew Lucas, ©GIA.

The Gemfields auction offered 32 tables with similar natural lighting conditions and a total of 62 rough ruby lots. Buyers had a schedule book listing the bid schedules available at each table. When a table was free, interested buyers would sit and go through the lots in the bid schedule at that table. Each auction book page listed bid schedule, table number, disclosure of any treatment, numbered lots included in that bid schedule, Gemfields grade, gram weight or millimeter size range, number of pieces and total weight for that lot, and total number of pieces and total weight for the entire bid schedule. There were also sections in the book for buyers to list their own graded price per gram and total price in US$ for each lot in the bid schedule, as well as the price they would bid for the entire schedule. At the bottom of each page was a space for the company name, bidder’s name, bid amount in US$, and the amount again to be written in words. Buyers submitted bids by filling out and signing the page. 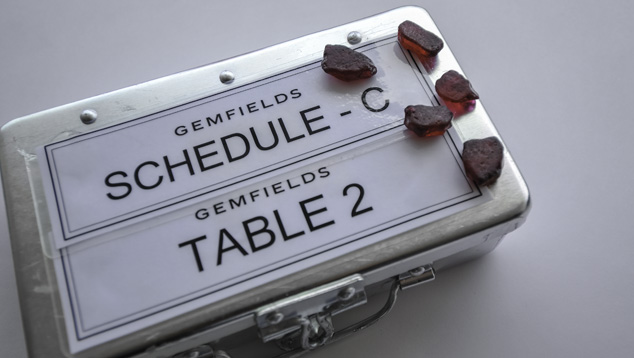 The parcel labeled “schedule-C at table 2” was composed of five pieces of fine-grade untreated ruby rough. Each weighed over 4 grams, for a total of 22.93 grams. Photo by Vincent Pardieu, ©GIA.
The lots were clearly created to attract existing ruby dealers with treatment expertise as well as new ruby buyers. Some lots were already treated. The treatments included lead-glass filling for lower-end material, as well as heating with borax for flux-assisted healed fissures. These lots were meant for manufacturers without expertise in ruby treatment. The same types of material were offered in untreated lots for those who preferred to do their own treatment. There were also higher-end lots of untreated material. 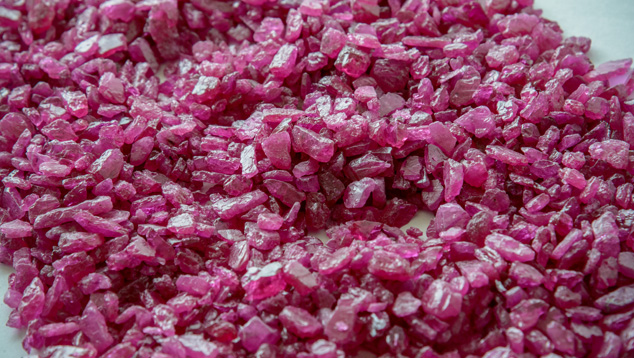 Some of the parcels of rough ruby had already been enhanced. This lot was heated with borax to enhance color and heal fissures. This gave buyers the option to bid on already-enhanced parcels or on similar but untreated material. Photo by Andrew Lucas, ©GIA.

Overall, the auction was a resounding success. Fifty-five companies placed bids, a record number for any Gemfields auction. Fifty-seven of the 62 offered lots were sold, a total of 91 percent by value and 90 percent by weight. Out of the 2.03 million carats of rough ruby offered, 1.83 million carats were sold. The total revenue generated was US$33.5 million. The total expenditure by Gemfields into the Montepuez mine was US$34 million by the time of the auction.

Auction buyers were satisfied. The Gemfields crew seems to have set reasonable reserve prices on the lots, and failure to reach the reserve price was not an issue. Gemfields seemed very open to feedback from the buyers on the auction process and the grading of lots for sale. Gemfields expects to narrow the invited companies down from 55 to somewhere in the 30s. They will use auction results to determine which companies to invite back on an ongoing basis. The next ruby auction is expected to take place before the end of 2014. 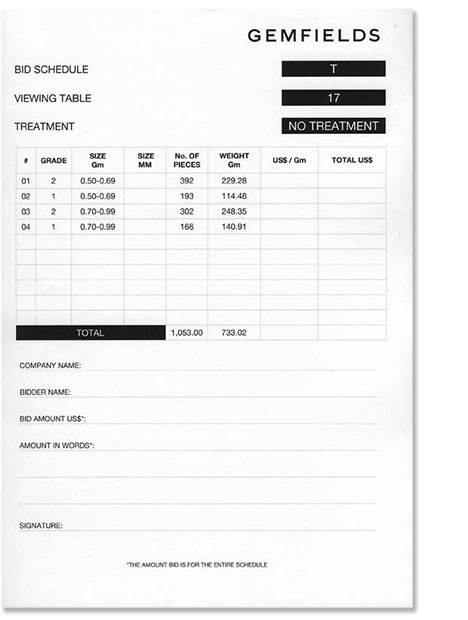 The colored stone industry has been moving toward companies with greater investments in mining and more vertical integration through the value chain. Although most global colored stone production still comes from artisanal and small-scale mining, larger companies with deep pockets are now strategically positioning themselves. Gemfields’s first Mozambique ruby auction follows their successful emerald auctions in establishing an organized and transparent process for rough colored gemstones to reach the market. 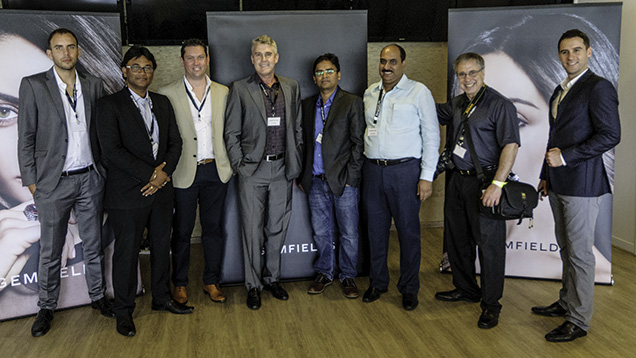 The Gemfields staff worked closely with GIA team members to ensure that the story of this first Mozambique ruby auction was shared. Photo by Vincent Pardieu, ©GIA.
With the success of these auctions, it’s very possible the trend will spread. Governments of gemstone-producing countries may see the benefits of a transparent system for legally obtaining their fair royalties in exchange for their countries’ rich gemstone resources. These factors can promote transparency in gemstone marketing, in a world where scrutiny is intensifying.
About the Authors