Rutang Moses, director of the South African Diamond Corporation’s (SAFDICO) Botswana diamond manufacturing operation, unwraps a five-carat round brilliant diamond from its gem paper and rocks it in the light so the fire can play.
“We do precision cuts here,” she says. “It’s taken us awhile to build the expertise locally because our company can never compromise its standards. But we have done it ‒ almost all from scratch.” The company has replaced most of its foreign workers with locals, including Moses, who is the first Motswana (native of Botswana) to manage a diamond operation.
SAFDICO’s diamond manufacturing plant is located in the new Diamond Technology Park, located between the airport and Botswana’s capital Gaborone. ‘High-tech’ is the phrase to describe SAFDICO’s diamond operation: computer-driven rough planners, laser bruters and robotic polishing machines.
And SAFDICO is only one of more than 20 such technology-driven diamond operations located in and around the Technology Park, which opened in 2010. Today, nearly 3,000 workers in Botswana are cutting and polishing diamonds to export ‒ at close to $800 million in revenue last year and closing in on the $1 billion mark by 2015. Not all of the polishing operations are profitable, but many are and others have made great strides toward that goal.
Such was not the case more than 20 years ago when De Beers opened the first diamond cutting factory in Botswana. Some executives of the company were skeptical at first. They believed cutting diamonds in Africa was too expensive to compete with India or an emerging China, and that the business was too far removed from world markets to make it viable.
Nevertheless, the government insisted, noting that it wanted its chief resource – diamonds – to bring more employment and value to the country’s economy.
Today, that diamond factory, Teemane (which means “diamond” in the local language) is still flourishing, albeit with new owners; 24 other factories are up and running as well. What has made the difference?
First, technology. The past two decades have brought a technological revolution in diamond cutting with the machines described above that have halved processing time and increased both quality of make and yield from the rough. As a result, manufacturers say the profit threshold for manufacturing in Botswana has fallen from 1 carat in 2000 to 0.40 carats today for companies that invested in the new technology.
This technology does not come cheap. A large diamond manufacturing operation can cost $7 - $10 million to start up and get running. Then there are the costs of training local technicians to operate, calibrate and maintain the extremely sophisticated equipment.
Second, is because they’ve had to. Botswana is the world’s largest diamond producer by value (about $4 billion last year. The government also owns a 15% stake in De Beers. Seven years ago, as part of a new partnership agreement, the government required De Beers to move most of its sorting and rough sales operations to Gaborone,  the country’s capital, and to set aside a percentage of rough diamonds for local manufacturing.
In the beginning, some firms set up minimalist operations to conform to the letter of the law, if not its spirit, but most found that with the government adopting reasonable regulations on employment, taxes and currency exchange, it was possible to turn a profit. In addition, officials from the government’s diamond office regularly visit diamond operations to check on their progress in developing high-tech diamond operations.
The manager of one plant that employs 300 workers noted that after four years of operation, there’s still room for improvement, but it’s profitable and capable of producing very high-quality cuts and room to become more efficient.
“Mostly we produce half-caraters and above here, because that’s where the profit is,” he said. “Sometimes, if we don’t always have suitable goods, we will work on 20- and 30-pointers to keep workers occupied, but we try not to do this too often.”
Most of the diamond cutting operations are clustered around the new Diamond Technology Park. The largest is run by Eurostar – one of the first to open in Gaborone, in 2004 – employing 520 workers, 490 of them local, trained by Chinese technicians from the company’s facility in that country.
The company has demonstrated its commitment to Botswana by building Africa’s largest diamond processing facility, which has room to double its capacity, said Eric Van Pul, the manager. All new workers go through six months of training; they then work side-by-side with an experienced colleague to ensure quality standards.
Now, the facility can produce precision cuts or any shape and size with quality on a par with any of the company’s Indian facilities.
While a number of companies are claiming success, challenges remain. There is little diamond manufacturing and technical expertise or experience “on the ground,” so foreign workers  need to come in and train people from scratch.
And Botswana, with its relatively high costs structure – it costs an average of about $60 per carat to manufacture diamonds there, compared to $15 to $20 in India, and $25 to $25 in China – will probably not grow into a major cutting center. The diamond manufacturers doing business there believe, however, that producing for niche markets – higher quality branded diamonds, for example – is sustainable over the long term.
They are optimistic that the government’s local rough diamond sales, operating from the Diamond Technology Park under the banner of Okavango Diamond Company, will enable them to further expand their operations.
Okavango began selling rough this month by tender auction and will eventually offer some three million carats yearly, about 10% of its current production, in a series of monthly sales.
The park has room for growth and manufacturers there are optimistic that they will need that extra space after the government, trading as Okavango Diamond Tenders, begins selling rough.
“These sales,” Rutang Moses said, “could enable Botswana to become both a marketplace and polishing center for diamonds.” 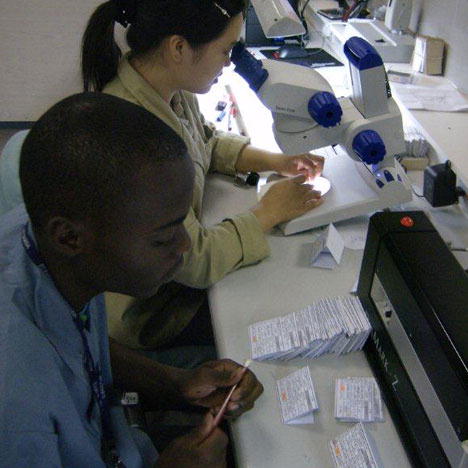 A Chinese technician works with a local trainee on the use of rough diamond planning machines. These high tech units scan the rough inside and out and the most economical way of cutting the stone. 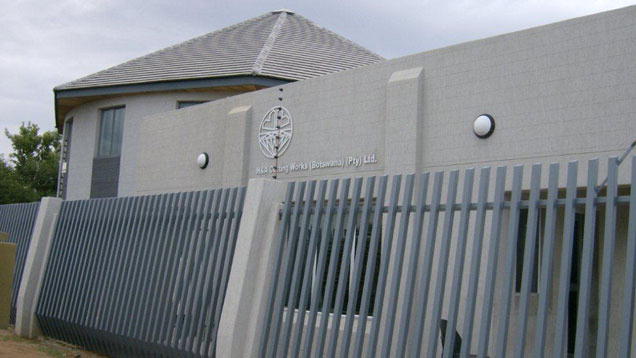