Over the past 14 years, however, more than 2,500 crystals of natural moissanite have been discovered by Shefa Yamim, an Israeli exploration and mining company. The crystals come from primary and alluvial deposits along the Kishon River, near Haifa in northern Israel. Shefa Yamim began prospecting in this area following the 1988 prophetic statement of the Lubavitcher Rebbe that “precious stones and gems” would be discovered in the valley next to Haifa (see video at http://youtu.be/_uzY5mV8rdY). In 2000, the company unearthed moissanite crystals ranging from 0.1 to 1 mm in size; two years later, 2.2 mm crystals were found. In 2009, a 3.5 mm moissanite discovery set a world record, only to be surpassed in August 2012 by a crystal measuring 4.1 mm—the largest specimen to date (figure 1 and http://goo.gl/JZFiwe).

There is evidence of even larger crystals, as many broken crystals were discovered. Some crystals have also been found in situ in the volcanic rock of the Rakefet magmatic complex, one of the magmatic bodies of Mount Carmel, just southeast of Haifa, which is drained by a small tributary to the Kishon River.

We studied 30 Israeli crystals ranging from less than 1 mm to 3.5 mm. All were identified as moissanite (SiC 6H) by Raman spectroscopy. Their morphology was hexagonal, bipyramidal to platy, with the pinacoid generally present (figures 2 and 3). The crystals were often broken, particularly the larger ones with rounded, shiny surfaces (again, see figure 1). As shown in figure 3, the crystals were transparent and ranged from deep blue (the most common color) to light green. Except for size, these characteristics are similar to those of other natural moissanites documented in the literature. The crystals are often associated with small bits of creamy white or red complex matrix.

Figure 2. These natural moissanite crystals are hexagonal to pyramidal, showing rounded areas that may result from either growth or dissolution. The crystals range up to 2.5 mm (not to scale). Composite photo by Aurélien Delaunay. 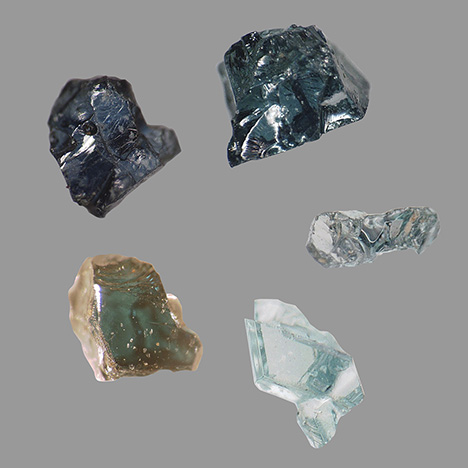 Figure 3. The colors seen in moissanite from the Mount Carmel area of northern Israel range from dark blue to light green. Note the broken or rounded morphology. Composite photo by Aurélien Delaunay.

The crystals we examined were inert under long- and short-wave UV radiation, with the exception of five small green to light green samples. In these five specimens, medium to strong orange luminescence was seen under either long- or short-wave UV. These were found to be magnetic when placed next to a powerful permanent alnico magnet. All of the samples contained small metallic inclusions, the largest approximately 30 microns in size, which could be the source of magnetism. We will continue to follow moissanite exploration in this area, and a more in-depth research paper is forthcoming.

Emmanuel Fritsch (Fritsch@cnrs-imn.fr) is a professor of physics at Institut des Matériaux Jean Rouxel (IMN), University of Nantes (France). Vered Toledo is the CEO of Shefa Yamim in Akko, Israel. Antoinette Matlins is a renowned gem and jewelry expert, author, and lecturer based in Woodstock, Vermont.