Download PDF
Artificially irradiated diamonds are common in the trade, and identifying them remains a challenge. The New York lab recently identified a large diamond as artificially irradiated based on careful spectroscopic analysis and a review of the lab’s database.
This 24.16 ct oval-cut diamond (20.47 × 14.00 × 10.72 mm) was color graded as Fancy Intense green-yellow (figure 1). The color was distributed evenly throughout the stone, with no color zoning detected. It showed strong yellow and blue fluorescence to long-wave UV radiation, and moderate yellow fluorescence to short-wave UV radiation. This fluorescence reaction and absence of chalkiness are seen in some natural diamonds with a similar bodycolor. Absorption spectrum in the mid-infrared region showed saturated absorptions in the one-phonon region, indicating a type Ia diamond with a high concentration of nitrogen. Also recorded were a moderate platelet peak at 1368 cm–1 (approximately 2.1 cm–1 intensity) and a weak absorption at 1433 cm–1. No hydrogen-related absorption or H1b/H1c center in the near-infrared region was recorded. Absorp­tion spectrum of this diamond in the ultraviolet/visible/near-infrared (UV-Vis-NIR) region at liquid-nitrogen temperature (figure 2) showed a moderately strong absorption from the N3 (415.2 nm) and H4 (496.0 nm) centers, as well as weak absorptions at 512.8, 594.4, and 741.2 nm (GR1). 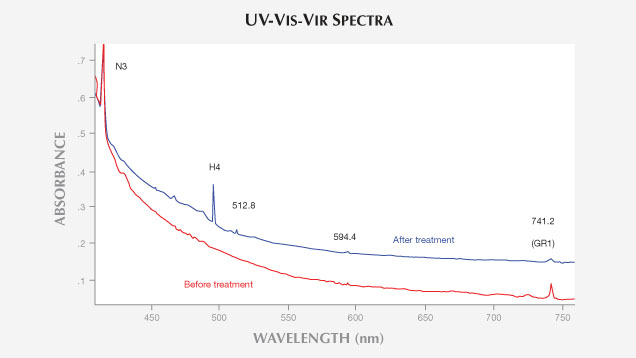 Figure 2. After irradiation and annealing treatment, a significant amount of optical center H4 was introduced. This is mainly responsible for the color improvement from Fancy brownish greenish yellow to Fancy Intense green-yellow. N3 absorptions in two spectra in this plot were normalized to the same intensity.
Absence of the H3 optical center was confirmed by photoluminescence spectroscopy at liquid-nitrogen temperature with 488 nm laser excitation. A fluorescence image collected using the DiamondView showed a gradual change from a predominantly blue table region to a mostly green upper pavilion and girdle area. The spectral features observed in this large diamond are rarely encountered in natural diamonds, raising the possibility of artificial irradiation treatment.
A search of the GIA database found a very good match between this stone and a previously tested diamond. The two diamonds were identical in measurements and weight, as well as their infrared absorption spectroscopic features, though the previous grade was Fancy brownish greenish yellow. This significant improvement in color appearance is attributed to the relatively high concentration of the H4 center produced by the artificial irradiation/annealing treatment confirmed in this study.
Despite its suspicious spectroscopic features, this irradiated diamond showed some gemological features normally observed in diamonds with similar natural color. This example demonstrates the value of careful spectral and gemological analysis, combined with a review of the GIA database, in gem identification.