Nephrite jade with high market value and production potential from the Chinese city of Hechi, in Guangxi Province, was tested by standard gemological methods, polarizing microscopy, scanning electron micros­copy (SEM), X-ray diffraction (XRD), Raman spectroscopy, and energy-dispersive spectrometry (EDS). The three samples were mainly white and gray-white (with areas of gray, gray-green, dark green, and black) and had a greasy to waxy luster. Within each of these color varieties, the samples exhibited either “band” or dendritic patterns. The band pattern, composed of tremolite, varied in shape and was either transparent or opaque. Its color, transparency, and distribution were different from the unpatterned areas. The dendritic patterns, which had a brownish yellow and dark brown to black color, were composed of chlorite that formed during metamorphism.

Nephrite is favored by Chinese collectors for its color and luster, as well as its fine texture and outstanding toughness. Primary nephrite deposits are found in more than 20 countries, including China, Russia, Canada, Australia, New Zealand, and South Korea. Chinese deposits are mainly distributed in the areas of Xinjiang, Qinghai, Guizhou, and Liaoning (Liao et al., 2005; Zhang et al., 2011). Research shows that nephrite’s excellent toughness is a product of its fine-grained interlocking structure (Bradt et al., 1973; Dorling and Zussman, 1985; Yang, 2011). Its green color is due mainly to the substitution of Cr3+ and Fe2+ for Mg2+ (Flint, 1990). In principle, nephrite can form in two different ways. One is by contact metasomatism between intermediate-acidic intrusive rocks and dolomite and/or limestone. The other is by contact metasomatism between serpentine or serpentinizing peridotite and more silicic rocks (Harlow and Sorensen, 2005; Siqin et al., 2012).

The Chinese nephrite samples in this study were recovered in 2012 from Dahua County, in the city of Hechi. There are several mines in the county, worked by independent miners who also farm the area. One farmer estimated production of more than 1,000 tons per year. The local government controls the mining, and the market for this nephrite is growing in Guangxi and Guangdong. In 2013, the pendant shown in figure 1 sold for US$300, while the bangles in figure 5 brought US$3,000 each. 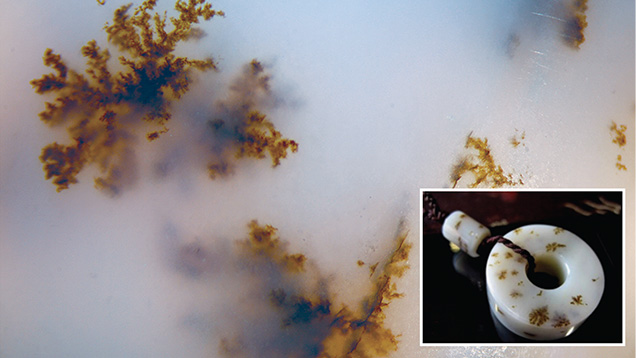 Figure 1. This nephrite pendant, from a mine at Hechi in China’s Guangxi Province, features a dendritic pattern. Photo by Yiming Chen.

This paper introduces the mine at Hechi and characterizes the patterns in these nephrites.

The nephrite mining area at Hechi, shown in figure 2, belongs to the west wing of the NNE-striking (15°–30°) Yangshan-Damingshan anticline. Regional strata dip steeply, and almost all main structural features strike NNE. The wall rocks are marine carbonate rocks deposited from the Upper Devonian to Lower Permian periods (362–290 Ma). Basic intrusive and volcanic rocks were emplaced during the Permian period (approximately 295–250 Ma). The heat generated by the emplacement caused metasomatism between the igneous rocks and the carbonate rocks. Nephrite is the product of this metasomatism (Bureau of Geology and Mineral Resources of Guangxi Province, 1985).

Figure 2. This map shows the main locations of China’s nephrite deposits (Zhang et al., 2011) and the working area of this study, in Guangxi Province.

The mining area has a typical karst landscape. It has been severely weathered by the subtropical climate, and slope sediments, fluvial, and alluvial materials are all visible. The ore-bearing country rocks are limestone, in severely weathered layers of varying thickness. Nephrite occurs as bands and veins in these layers. The width of a single vein ranges from tens of centimeters to several meters. The ore body and wall rock (mainly dolomite marble) are alternately distributed, and the boundary between them is sharp.

Figure 3. The dark green nephrite on the left shows a beautiful green color when illuminated. Black nephrite carvings of the Buddhist goddess Guanyin (center) and necklaces of nephrite beads with various colors (right) are displayed at the local market near the mine. All material shown was mined in Hechi. Photos by Yiming Chen and Zuowei Yin. 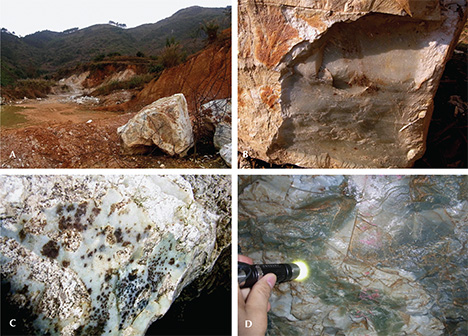 Figure 4. A: In the hills near Hechi, nephrite is found in shallow ground, about one meter underground, and belongs to secondary deposits. B: Grayish green rough with a thick weathered surface. C: Nephrites with dendritic patterns and country rock. The country rock is dolomitic marble that has undergone metasomatism. The boundary between marble and nephrite is sharp. D: In the primary deposit, nephrite occurs as bands of dark green, white, and gray. Photos by Yiming Chen.

Three white and gray-white nephrite samples were examined for this study: the two bangles with dendritic patterns (figure 5, left and center) and a slab with a band pattern (figure 5, right). The dendritic patterns in the two bangles ranged from brownish yellow to black. In the slab, the banded area showed lower transparency than the rest of the sample. The samples were tested by standard gemological methods, polarizing microscopy, scanning electron microscopy (SEM), X-ray diffraction (XRD), Raman spectroscopy, and energy-dispersive spectrometry (EDS). We conducted the tests at the National Key Lab of the China University of Geosciences in Wuhan.

Figure 5. In these photos of the three nephrite samples, the red circles represent the testing points. The two bangles display a dendritic pattern, while the slab contains a band pattern. Photos by Yiming Chen.

For SEM analysis, the authors fractured the specimens and coated the fracture surfaces with carbon powders using an SCD-005 ion sputter coater. The specimens were then fastened to a round metal disk for observation. An FEI Quanta 200 scanning electron microscope was used to observe the nephrites’ microstructure, especially their dendritic and band patterns. The SEM images are from secondary electrons.

The instrument used for XRD analysis was an X’Pert PRO DY 2198 with Cu Kα radiation operating at 40 kV and 40 mA. The instrument was equipped with a small platform and a monocapillary lens with a 100 μm diameter micro-zone. Dendritic patterns were tested by the micro-area method, since it is difficult to detect very small particles through normal analysis.

To detect the mineral composition of the patterns, we used a Bruker Senterra scanning Raman microscope in the 40–3650 cm–1 region. The instrument, which features a 785 nm light source and 50 mW laser energy, was set to approximately 3.5 cm–1 resolution and 10 seconds per scan. Dendritic, band, and unpatterned areas were all tested.

For EDS analysis of the dendritic and band patterns, we used an EDAX Genesis 2000. This element-testing method employs back-scattered electrons to obtain chemical composition. Measurement error with the EDS data is 0.1–0.5%.

Gemological Features and Petrographic Study. The samples showed a spot RI of 1.61–1.62 and a hydrostatic SG of 2.88–2.90. The unpatterned and band areas of the nephrite slab were sliced into thin sections. Under polarized light, they displayed different microstructures. The tremolites of the band area (figure 6, left) were fibrous, columnar, of various grain size, and poorly oriented. The individual tremolite crystals ranged from less than 0.05 to 0.2 mm long, occurring in radial beam and fan shapes. The band had a coarser texture than the unpatterned area. The interwoven tremolites of the unpatterned area (figure 6, right) were fine, with a homogeneous grain size. Most of the tremolites were less than 0.05 mm long.

Figure 7. These SEM photos of tremolites with dendritic patterns are magnified 1514× (left) and 2840× (right). The red circles represent the EDS testing points. Photo by Yi Bao. 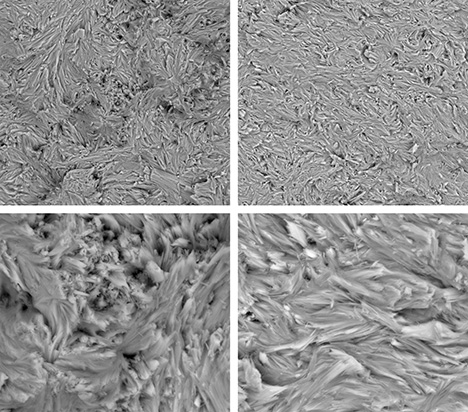 Figure 8. SEM photos of the band (top left) and unpatterned areas (top right) of the nephrite slab are shown at 500× magnification. Note the uneven distribution of the grains in the band area. At 2000× magnification (bottom left and bottom right), the grains are poorly oriented in the band and better oriented in the unpatterned area. Photomicrographs by Yi Bao.

To verify the dendritic patterns by means of their crystal structure and chemical composition, we turned to XRD and EDS. 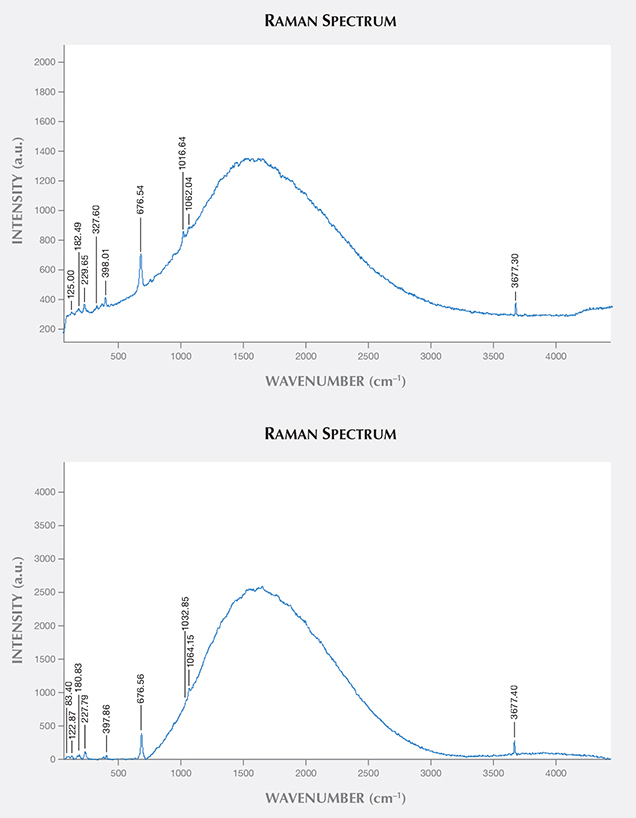 Figure 9. The Raman spectra of the band (top) and unpatterned area (bottom) of the nephrite slab identified them as tremolite.

XRD. To identify the mineral crystal structure of the dendritic pattern, we used the micro-area XRD method, the results of which are shown in figure 10. According to Bragg’s law, defined as 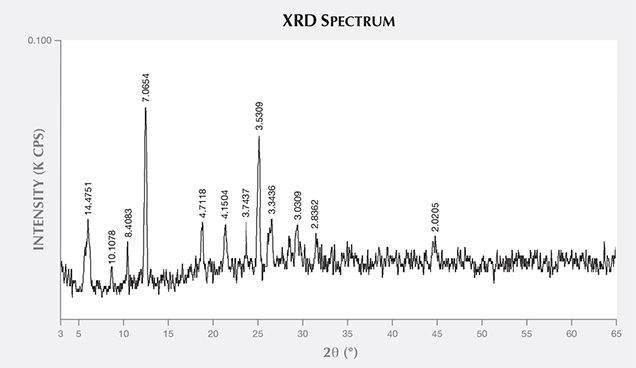 Chemical Composition. The dendritic, band, and unpatterned areas were all tested by EDS. The main composition of the dendritic pattern (table 1) was consistent with chlorite, which has a general chemical formula of Y3[Z4O10](OH)2•Y3(OH)6, where Y can represent Ca, Mg, Fe2+, Al, Fe3+, Cr, Ni, Mn, V, Cu, or Li, and Z is mainly Si and Al. According to table 1, the formula of chlorite here is (Ca, Mg, Mn, Fe)[Si4O10](OH)2(Ca, Mg, Mn, Fe)(OH)6. The band (table 2) and unpatterned areas (table 3) were both consistent with tremolite.

Nephrite jade from primary and secondary deposits at Hechi in China’s Guangxi Province displays white, gray-white, gray, gray-green, dark green, and black colors, with a greasy to waxy luster. The white and gray-white samples from this study showed band or dendritic patterns. The transparent or opaque bands contained an irregular arrangement of tremolite, and their color, transparency, and distribution of grains were different from the rest of the nephrite. The dendritic pattern only occurred in the secondary nephrites found in river or soil. There were also some dendritic patterns with brownish yellow and dark brown to black color. They contained very small particles composed of chlorite that occurred during metamorphism. These kinds of dendritic patterns have not been found in other Chinese nephrite mines, making them useful features for identifying the locality. The pattern also proves that these nephrites are from secondary deposits, which have a higher value in the Chinese market.

This research is supported by the National Natural Science Foundation of China (40272021) and the Research Foundation for Experimental Study of CUG (2013 key project). This study also contributed to the Global 1000 Talents award to M. Santosh from the Chinese government.

Zhao H.X., Gan F.X. (2009) The Raman spectroscopic analysis on several nephrite jades from different provenances and the application in non-destructive study of ancient jade artifacts. The Journal of Light Scattering, Vol. 21, No. 14, pp. 345–354.