Dr Hobart King was already an accomplished geologist with more than 40 years of experience, 20 of those spent teaching at university level. He’d moved on to a career in publishing, but a casual visit to GIA’s informational stand at the Tucson gem and mineral shows led him back to the classroom – this time, as a student.

King, who worked as a geologist at West Virginia University and the West Virginia Geological and Economic Survey from the mid-1970s to the early 1990s, taught at Pennsylvania State University and Mansfield University of Pennsylvania from the 1980s to 2008. He taught geology, hydrology, global positioning systems and web-based cartography, and served as the director of Mansfield’s Center for Effective Teaching and a content adviser for the Earth and Space Science Education programme.

When King approached the GIA stand in 2010, he had already started to consider furthering his own education. He had also begun publishing informational articles on Geology.com, an Earth science news and information website he had purchased in 2005 with the intent of helping to educate the general public and those interested in introductory geology.

“Tumbled stones are the least expensive way to start a gem collection,” says King, who sells a few tons of the stones each year to hobbyists and beginning lapidaries, and even sends them to GIA for identification. “When I took GIA’s Gem Identification course, I was happy to be asked to identify a number of tumbled stones.” Courtesy of Geology.com. Photo by Bradley Cole

“I’d always been interested in gems,” he says. “As I wrote articles about rocks and minerals for Geology.com, many were gem materials, and I’d sometimes include a photo of a cabochon or faceted stone. I noticed the gem photos led to a large increase in visitors, so I started adding more information about gems to those articles. The popularity of those articles increased in page views and how much time they’d spend on the page – my visitors wanted to know about gems! That compelled me to obtain a formal education in gemmology so I could write more competently.”

King had been an early adopter of online education, helping Mansfield University of Pennsylvania develop what he believes was “one of the first interactive geology courses in the United States delivered completely online”. He was surprised and pleased to learn that GIA offered Distance Education classes, and enrolled immediately in Colored Stones Essentials, continuing with other GIA Distance Education courses over the next several years.

In 2016, King had a personal breakthrough that made it possible for him to delve even deeper into the world of gemmology: new vision.

“Cataract surgery dramatically improved the clarity of my vision and perception of colour,” he says. “That motivated me to enrol in GIA’s lab courses, so I decided to take the Colored Stone Grading lab class while visiting California, and returned later for Diamond Grading and Gem Identification.” 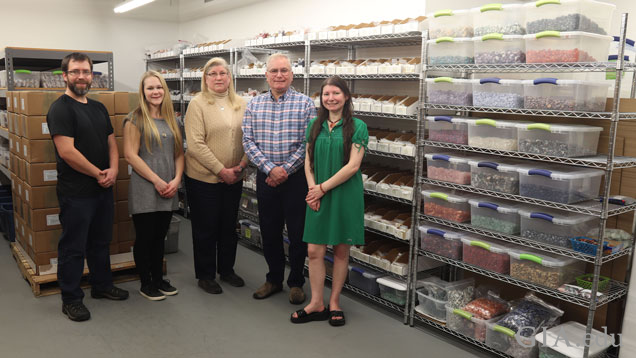 King, whose interest in geology began as a 6-year-old “prospecting” for invertebrate fossils in his parents’ limestone driveway, earned his Graduate Gemology diploma in 2017 – 42 years after earning his first degree in geology.

“I’m convinced that GIA’s Gem Identification course is one of the finest – if not the finest – distance education course available,” he says. “The entire GG programme has to be among the best programmes delivered online, and it’s been an important asset for me. It is extremely helpful in my content writing, and provides a qualification that separates me from writers who are not writing from formal education and experience.”

The continuing education has helped equip King and his four employees, including his sister and daughter, who also run a lapidary and rock tumbling retail site RockTumbler.com, to better serve the million-plus visitors that Geology.com draws every month.

“A typical visitor might arrive looking for information about rocks, minerals, volcanoes or maps – and then, they see an article about a gemstone and read that,” says King, who considers writing educational content for them to be his most important job. “In a way, our website has become an ambassador for gemmology, an applied form of mineralogy, one of geology’s core disciplines.”

“As in gemstones, the inclusions of mineral debris in coal is undesirable,” says King, a former geology professor and a GIA GG. “Evaluating coal is similar to evaluating the clarity of gemstones, the difference is mainly a matter of scale.” His image of a “highly magnified view of coal in transmitted light” shows a spore (large yellow object), thin shreds of woody material (red bands), smaller spores and algal debris (orange and yellow particles), and charcoal or opaque mineral inclusions (black material.) Courtesy of Geology.com. Photo by Hobart King

He’s found that researching and preparing Geology.com’s daily news page, for which he aggregates relevant news stories from trade and consumer media, takes the bulk of his work time while also attracting significant engagement from visitors.

“The daily news page is the part most visited by professional geologists, and they engage with stories related to oil, gas and mining,” he says. “Oil and gas, earthquakes, volcanoes and mining stories are the most popular with our overall readers. Knowing what they engage with guides me, and I include a sprinkling of other topics for curious visitors.”

King is fascinated by the “connections and patterns” he finds between news stories.

“With natural gas, for example, when I see topics surrounding discoveries, pipeline project announcements and liquefied natural gas over a period of months, it helps me make connections and understand the movement of prices and global production, consumption, investment and politics,” he says. “And I hope my readers will see these patterns, too.”

As King has advanced in his own studies of gemmology, he’s made connections between gem and jewellery news on JCK's daily blogs, for example, and stories in Gems & Gemology and Mining.com.

“Retail, research and mining have many intersections,” he says.

King is endlessly curious, and hopes the accessible, educational content and introductory lapidary supplies his companies provide will inspire others to also develop eager, open minds.

“We learn something new every day,” he says, “and we’ll continue to share as we learn”.

A review of Smithsonian Nature Guide on Gems.

Books: Gemstones of the World

A brief look at the fifth edition of this well-known reference guide.

Books: The Collector's Guide to the Minerals of New York State (in English)

Review of The Collector's Guide to the Minerals of New York State.