Gemologist and rock hound Leela Hutchison never imagined her lifelong passion for adventure and “intense” love of gems and minerals would lead to exploring the world’s largest crystals and sharing her knowledge with audiences around the world. But Hutchison’s interests collided in 2001, when she found herself carefully climbing over massive 40-foot-tall crystals in 100 percent humidity and temperatures near 128 degrees Fahrenheit in Mexico.

Hutchison – who describes herself as an “adventure seeker” – has carved out a career researching the giant crystals and speaking at conferences, lectures and renowned museums. She also has written a book about them that is in its second edition.

“My favorite part of my work is to pique people’s curiosity,” Hutchison says. “It’s rewarding to educate others about the mineralogy and geology of crystal growth, how they are formed and where they are found around the world.”

Miners who were drilling for silver in Naica, Mexico in April 2000 found a “bubble in the bedrock” nearly a 1,000 feet below ground: a cave of giant selenite crystals, a transparent colorless variety of gypsum.

Hutchison grew up hiking, climbing and exploring in the desert heat of El Paso, Texas and was also familiar with crystals from her work in hands-on healing. That experience, as well as connections she made from doing charitable work in the Chihuahua, Mexico area, made her a good candidate to join one of the first group of explorers of those crystals in January 2001. 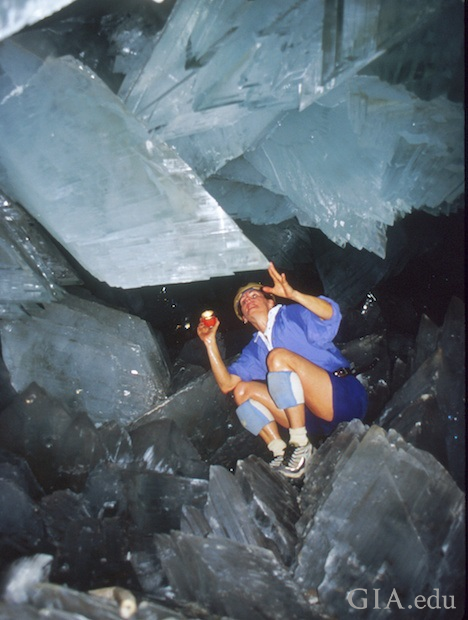 Hutchison, pictured above in 2001, used her skills as an avid rock climber to navigate sharp crystals inside the dark caves. Photo courtesy of Leela Hutchison

The conditions in the caves were “challenging and near fatal,” Hutchison says. “It was an extreme, hostile working environment … we were going into areas never discovered before and we didn’t know how far, deep and wide they were.”

Inside the caves, Hutchison examined and helped document the huge selenite crystals that are believed to be the largest in the world – approximately 40 feet tall and weighing as much as 60 tons.

“Seeing the crystals for the first time was like entering into Superman’s fortress of solitude, [with] colossal sized crystals on an exo-planet in the solar system, where the temperatures were exceedingly hot and I felt as if I were suffocating,” Hutchison says.

She was eager to share her experience with others after her journey into the caves, so Hutchison began to present information and photos on them. After “overwhelming” interest, she began speaking to more audiences – such as the Explorers Club and gem and mineral societies – and learning more about the crystals herself.

A few years later, in another desert, Hutchison embarked on a new adventure when she decided to attend the 2004 AGTA Gem Fair in Tucson, Arizona. Her uncle, a jeweler and watchmaker, had recently passed away and Hutchison was helping her cousin assess the loose gems he had collected. As she received her badge to enter the show, Hutchison says she saw the GIA booth, struck up a conversation and enrolled in the On Campus Graduate Gemologist program “right then and there.”

“That was the turning point in my career of a long-loved passion as an explorer and researcher of the largest crystals found on planet Earth,” Hutchison says.

Hutchison, who earned her GIA GG diploma in 2005, says her fascination with the geology of the American Southwest led to a near-obsession for hiking deep into the canyons, mountain ranges and caves of the region as a rock hunter. Photo courtesy of Leela Hutchison

Hutchison’s research focuses on unexplained mysteries in the Chihuahuan desert and the caves, including understanding how the giant crystals were formed and whether there are more yet to be discovered. She believes there are more massive pockets of crystals that lay even deeper than the Naica mine.

“Many of my findings are from my own experiences in the Chihuahuan desert and from interviews (with experts), such as with Dr. Penelope Boston, director of astrobiology for NASA. She determined that microbes inside the crystals were over 60,000 years old and still alive, and did not match up in any database held by NASA,” Hutchison says.

Although the caves have re-flooded and are no longer accessible – the mining operations that removed water from the caves has ceased – Hutchison continues to investigate the crystals by examining other deposits of selenite in the area. She shares her research findings at conferences and museums, including the Los Angeles Museum of Natural History in September 2017. She’s also been interviewed on several national radio programs.

Hutchison relies on strong communication skills to engage her audience, and credits her GIA education with giving her the knowledge to speak professionally about crystals, gems and minerals.

“Clear communication has helped to generate and build interest, excitement and enthusiasm in audiences worldwide,” she says. “(Before earning my GG) I did not have the ability to be knowledgeable or professional to share with people the extraordinary science of these newly discovered crystals.”

This photo of Hutchison inside the caves, where the largest crystals are nearly 40 feet tall, was featured in Smithsonian magazine in April 2002. It is also the cover image of Hutchison’s book, a first-hand experience with images from her exploration. Photo courtesy of Leela Hutchison

The second edition of her book, “Journey Into the Giant Selenite Crystal Caves of Mexico,” was published in 2016. She also works individually with clients, acquiring gems and crystals for jewelry, their home or use in personal healing. Hutchison says her gemology education gave her credibility with clients and the knowledge to really understand what she was attempting to acquire, from “alexandrite to tanzanite.”

“Every year, when I attend the Tucson gem show and walk by the busy pavilion with new students wanting to enroll, I feel pride and gratitude in attending GIA,” she says. “My education was absolutely invaluable to my pursuit of interests, whether in gems or minerals.”

A year after her exploration of the giant crystals, a photo of Hutchison inside the caves was included in the April 2002 issue of Smithsonian magazine. It was an honor, Hutchison says, that came full circle at this year’s AGTA Gem Fair when she was asked to share her research with the Smithsonian Gem and Mineral Council.

“In the original article there was a quote by Dr. Jeffrey Post (chair of the department of mineral sciences for the Smithsonian Institution) and there he was in the audience as I presented to the Smithsonian,” Hutchison says. “It was really amazing, a top honor.”

Hutchison’s passion for the heart of her work – gems and minerals – remains strong. She recently spent time in Arkansas digging for quartz. A personal trip, she says, because “it’s fun to go into red clay and pull out beautiful crystals.”

She is equally passionate about building excitement about crystals, hoping to spark her audience’s interest – the way the crystals have captivated her for 17 years.

Kristin A. Aldridge, a contributing writer, is a graduate of GIA’s Pearls and Accredited Jewelry Professional programs.

Within a few years of their discovery, the diamonds deposits of South Africa produced more diamonds than what had come from India in two millennia.