Nature gives us a brilliant palette of color-changing leaves and a spectacular kaleidoscope of sunsets during the fall season. Yet, year-round, a treasure trove of gemstones in rich earth tones is ripe for collecting.

Let’s take a look at some gems, jewelry and minerals in autumnal hues to kick start this colorful season.

Natural, untreated topaz commonly occurs in pale yellow, brown, colorless or gray. Other hues of pink, green, blue and violet occur in nature, but these colors are rarely vivid. Although blue is the most popular color of topaz, the most valuable are the orange, pink, red and purple colors generally referred to as Imperial topaz, which reflect the beauty of autumn sunsets. 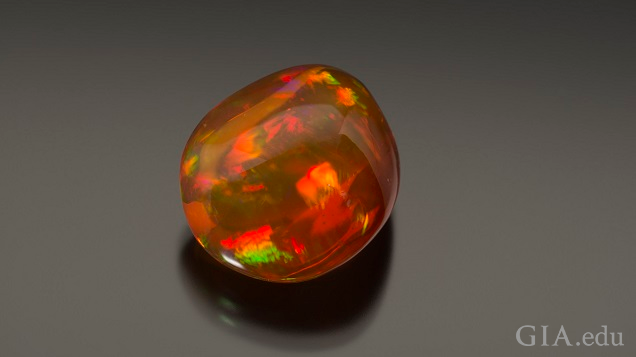 Gemstone varieties are often named for something they resemble such as sunstone, fire opal and fire agate, all colors in the autumnal spectrum.

Sunstone gets its phenomenon called aventurescence from tiny hematite, copper or goethite platelet inclusions that reflect light. The appearance of the phenomenon depends upon the size of the inclusions: small inclusions create a reddish or golden sheen on top of any bodycolor and larger inclusions create attractive, glittery reflections. Most sunstones have yellow, orange or brown bodycolor. Oregon is a major source of the finest sunstone. 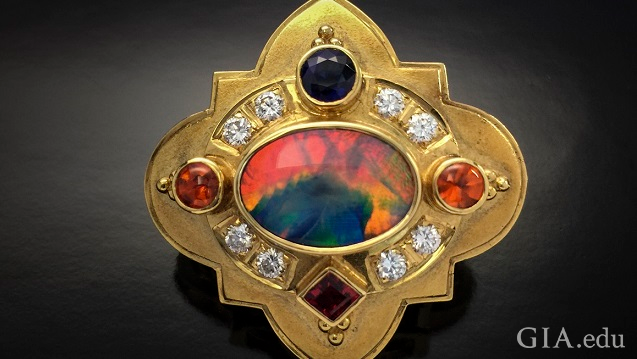 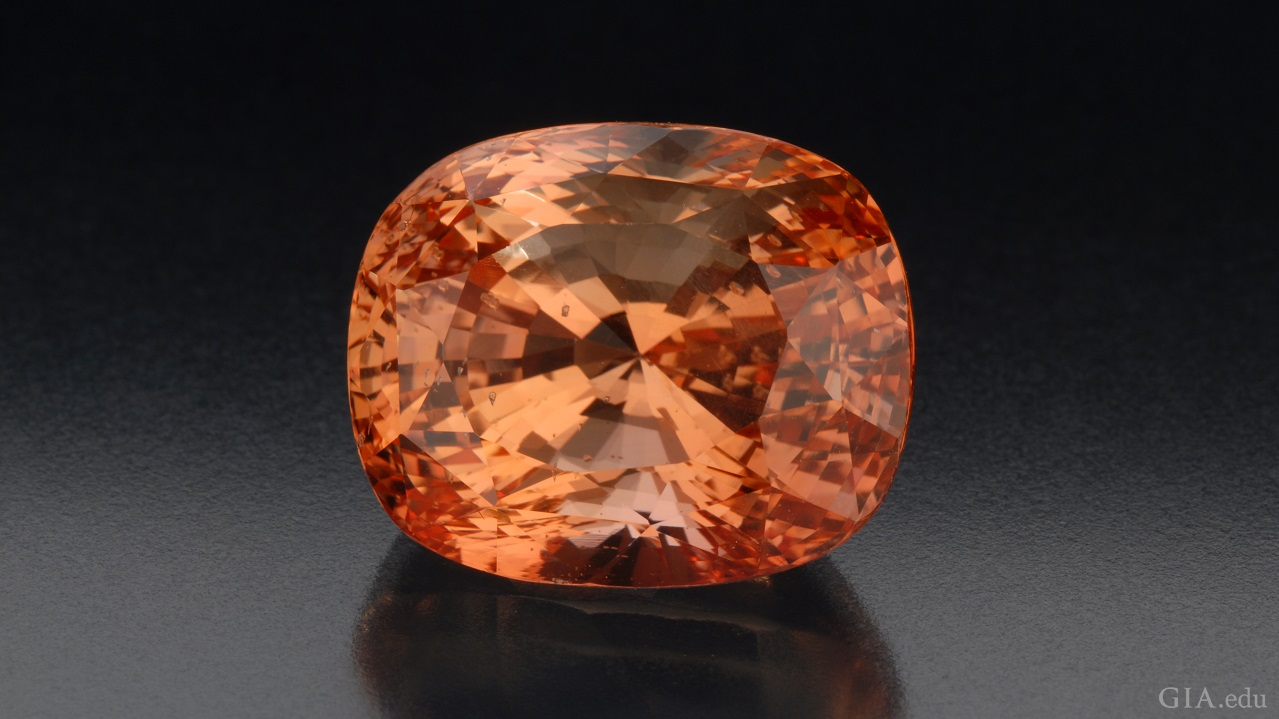 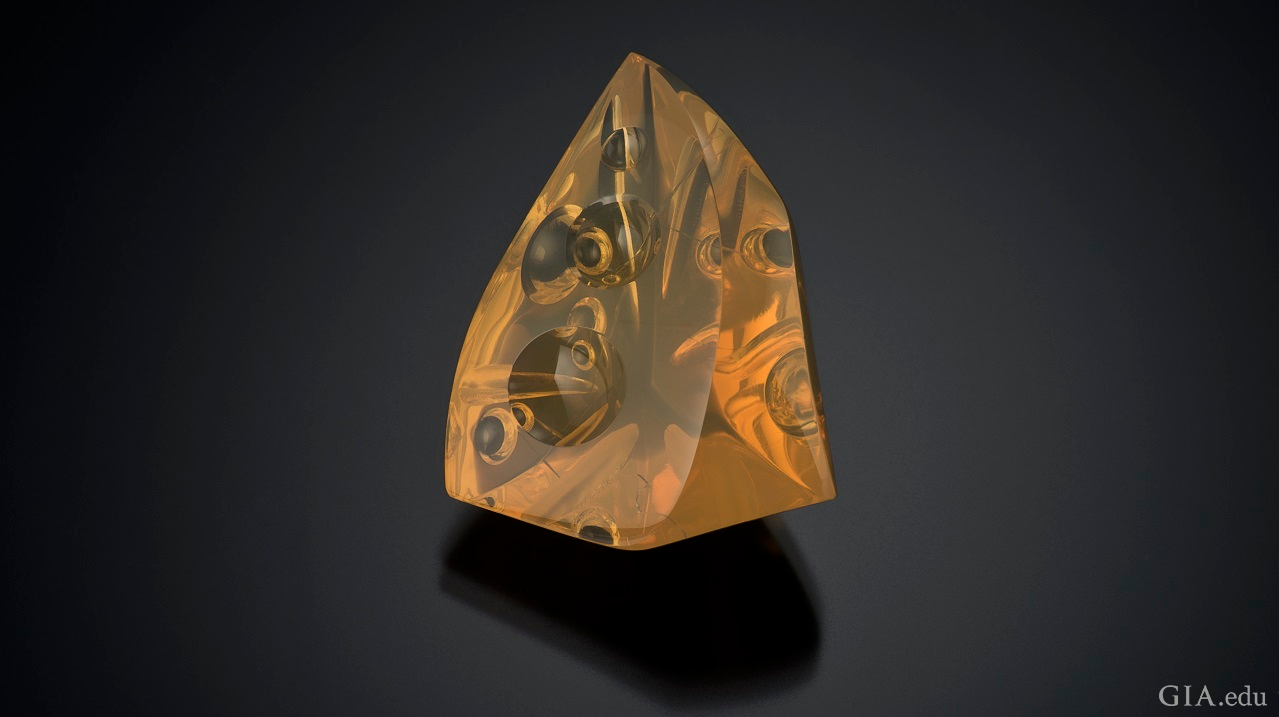 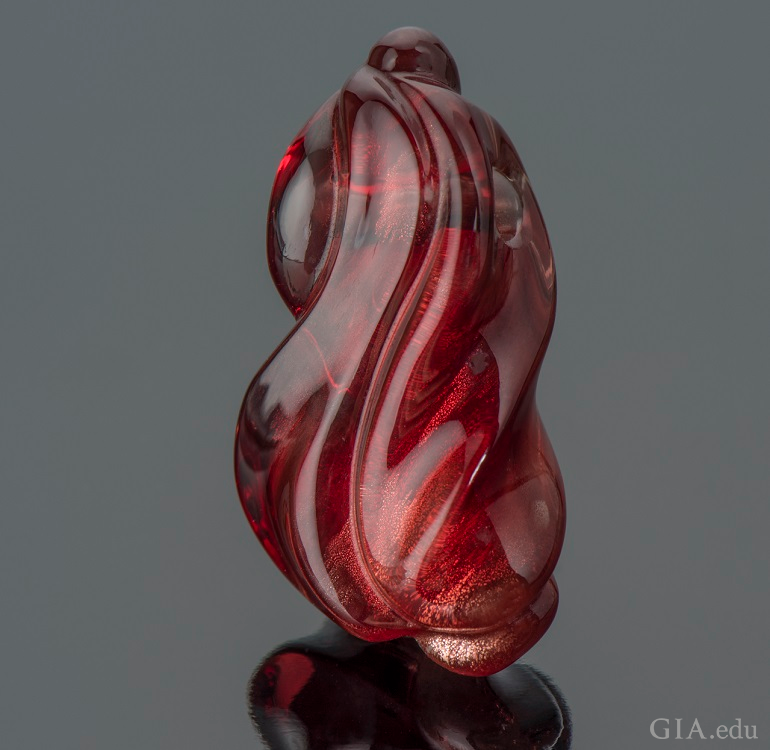 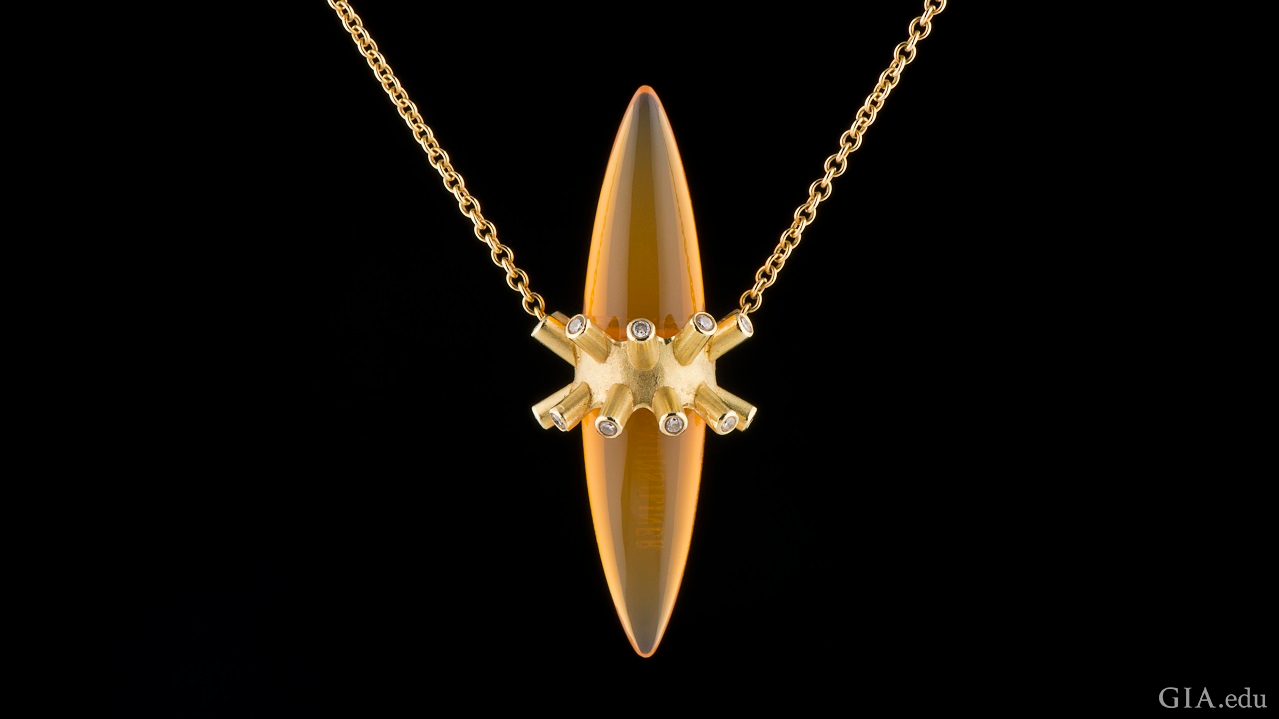 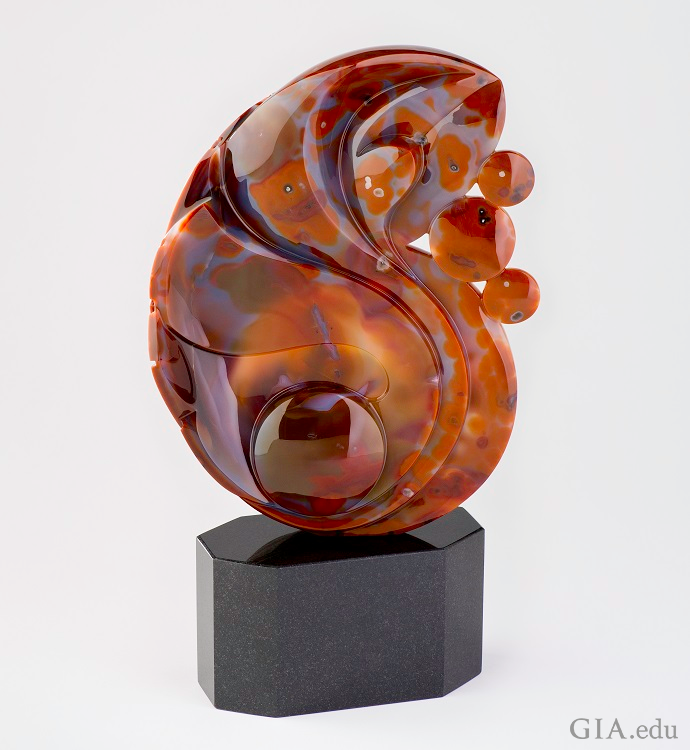 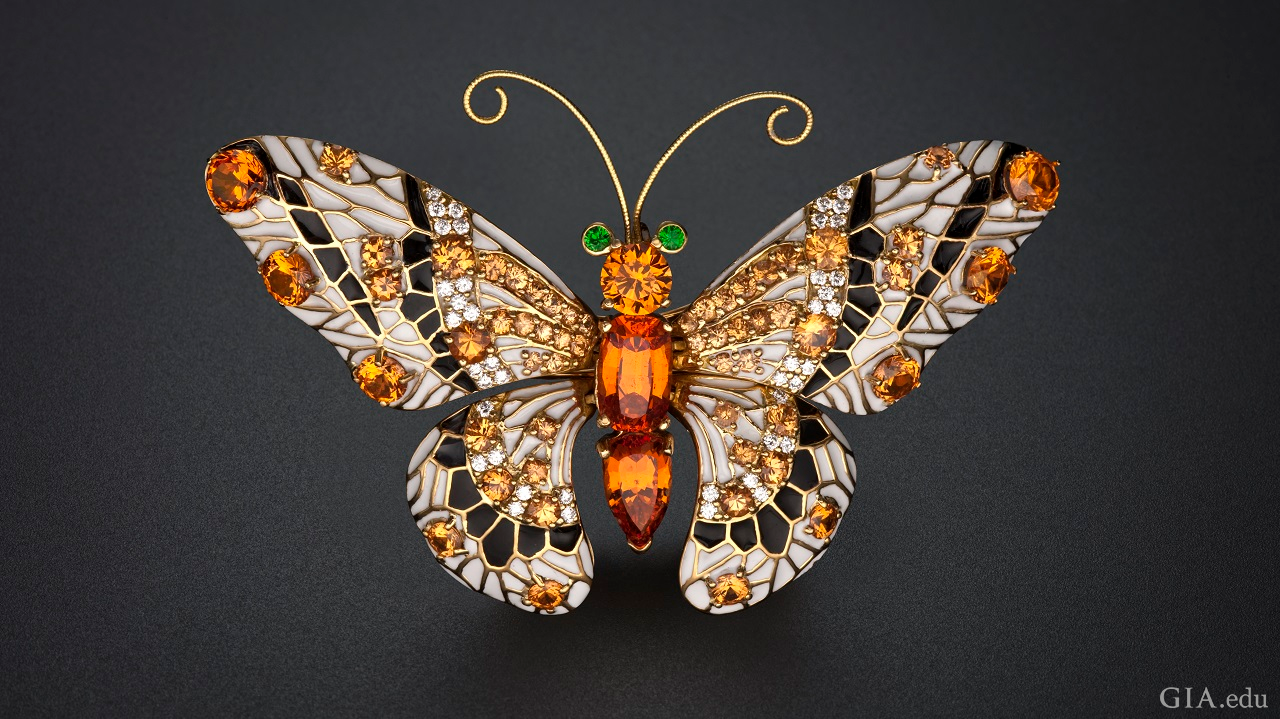 Fire opals are found in a range of warm hues – red, orange and yellow. They can be transparent, translucent or opaque, usually with a vitreous luster. According to Jürgen Schütz of Emil Weis Opals (Idar-Oberstein, Germany), one of the oldest opal cutting companies in the world, fire opal from Mexico is the only opal mined in quantity that is clear enough for faceting. It ranges from colorless to a dark red that is comparable with ruby. This type of material is available in large quantities and can even be calibrated. The majority of opal worldwide comes from Australia, Mexico and Ethiopia. 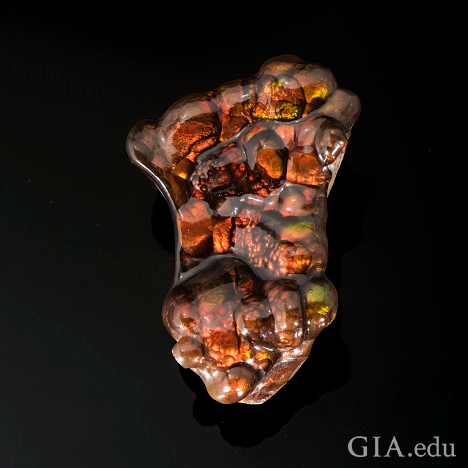 This fire agate is an excellent example of iridescence in chalcedony. Courtesy of Commercial Mineral Company, Inc. Photo by Robert Weldon/GIA

Fire agate is a variety of chalcedony, a micro or cryptocrystalline quartz. With its swirling flares of orange iridescence and flashing streaks of brown, yellow and green, it is aptly named. It forms in botryoidal structure, resembling a cluster of grapes. Fire agate is an excellent example of the iridescence phenomenon seen in chalcedony.

Agates can be found in rich fall colors of orange, brown and yellow, often forming in layers or bands of color. Massive agate deposits were discovered in Rio Grande do Sul, Brazil in the 1800s and shipped for cutting to Idar-Oberstein. Today, agate from Brazil remains a favorite of gem carvers for its depth of color. 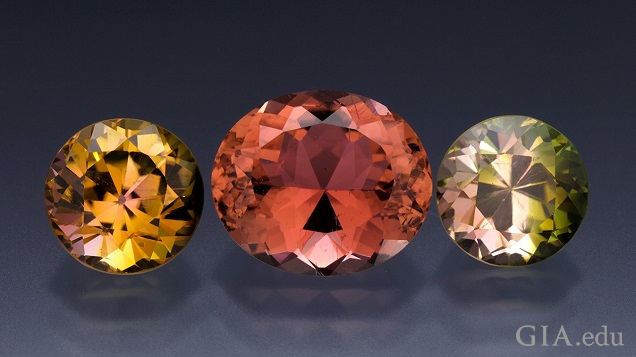 Tourmalines are known for color zoning, often exhibiting two or more colors, and also form in a wide range of single colors. This glowing set of multicolored tourmalines resemble the sunset in an autumnal sky and showcase their versatility of color. Courtesy of Bjorn Anckar. Photo by Robert Weldon/GIA

October’s birthstones, opal and tourmaline, also offer a broad range of autumnal hues in yellow, orange and brown. Citrine and topaz, the November birthstones, fit well in this season’s theme with yellow to red color ranges.

Several other gemstones also convey the beauty and variety of autumnal colors:

Amber - Yellow and golden amber are most familiar to the consumer, although amber can be transparent red, which increases its value. Rare instances of strong fluorescence give amber a bluish or greenish appearance that increases its value even more. Its amorphous structure makes it a good medium for preservation of plant and animal inclusions. 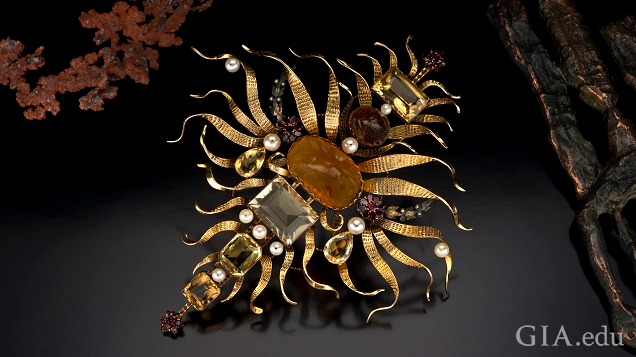 “Solar Motive” sweetens the gallery collection of orange gemstones in honey-color Baltic amber complimented with citrine, almandine and pearls in an explosive combination of golden rays. Courtesy of the Anthony & Elizabeth Duquette Foundation for the Living Arts. Photo by Orasa Weldon/GIA

Citrine - Natural color citrine is rare. Most of the citrine on the market is a result of heat treatment of pale violet amethyst to an attractive yellow that makes it an appealing alternative for topaz and yellow sapphire.

Garnet - Several species of the garnet group also fall in the autumn color range, the brightest being spessartine, which is typically yellowish orange through reddish orange.

Pearls - Golden South Sea pearls are among the most desired pearls. They are grown in the gold-lip variety of the oyster Pinctada maxima, which gives them thick nacre and warm, golden tones. 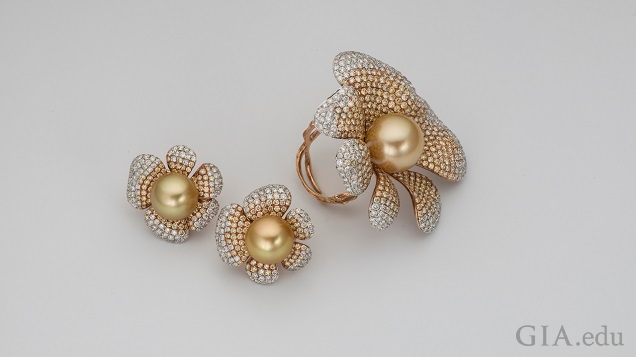 This South Sea pearl ring and earring suite offers a soft contrast to the strong orange hues, much like the evening’s first glow at sunset. Courtesy of Wing Hang Diamond, Hong Kong. Photo by Robert Weldon/GIA

Sapphire - We usually think of sapphire as blue, although sapphire comes in all colors and shades. The intense light to medium pinkish orange to orange-pink of Padparadscha sapphire is the rarest.

The bounty of autumn gemstones in a palette of brilliant colored gemstones makes it fun to fall into the mood of the season.