Drusy (also spelled druzy) jewelry has surged in popularity in recent years. Celebrities wear it on the red carpet and designers clamor for it at gem shows.

Drusy refers to clusters of small crystals that sparkle like snow or sugar coatings on the minute crystals of rock surfaces. These unique and glistening gems sparkle in bright light and appeal to those who like a natural or boho style of jewelry – and judging by the lively interest and brisk trading for it at the recent gem shows at Tucson in February, the interest continues. Designers clamored for naturally sparkling gems, along with those treated to be even brighter and more colorful, for fresh, new jewelry looks.

In nature, the most plentiful and durable drusies are found in quartz, or in the cryptocrystalline varieties of agate and chalcedony. Quartz has long been a favorite of gem carvers, and contemporary designers and cutters have discovered the intrigue and challenge of working with material that contains these minute crystals. The outcome is often stunning: designers have won national awards with gold and platinum jewelry that feature them. 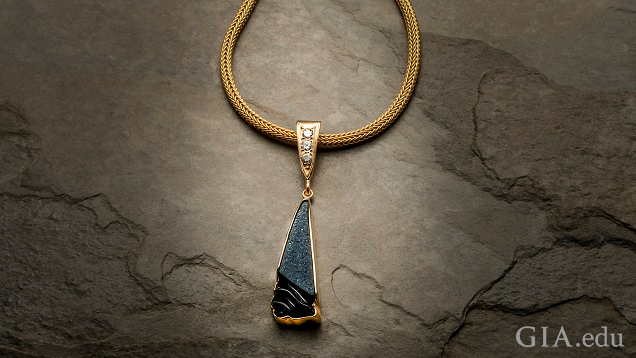 Drusy is often cut in a free-flowing style that follows the shape of the material to preserve the mini crystals. Because of its delicate nature, it is best suited in jewelry as pendants, earrings, or brooches. It can be fashioned in rings and bracelets too, if they are designed with protective settings and care instructions are provided.

Quality is determined not only by color, weight and clarity, as in most colored gemstones, but also by evenness in size and coverage of the crystals on the matrix. Good quality drusy is especially rare in non-quartz species, such as garnet and calcite. The durability, or toughness, of the drusy is dependent on the nature of the crystals and the matrix in which they are embedded. For example, drusy on quartz and chalcedony are more durable than on calcite, which is more fragile. 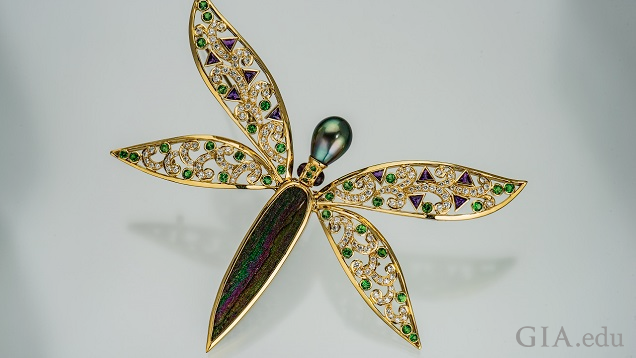 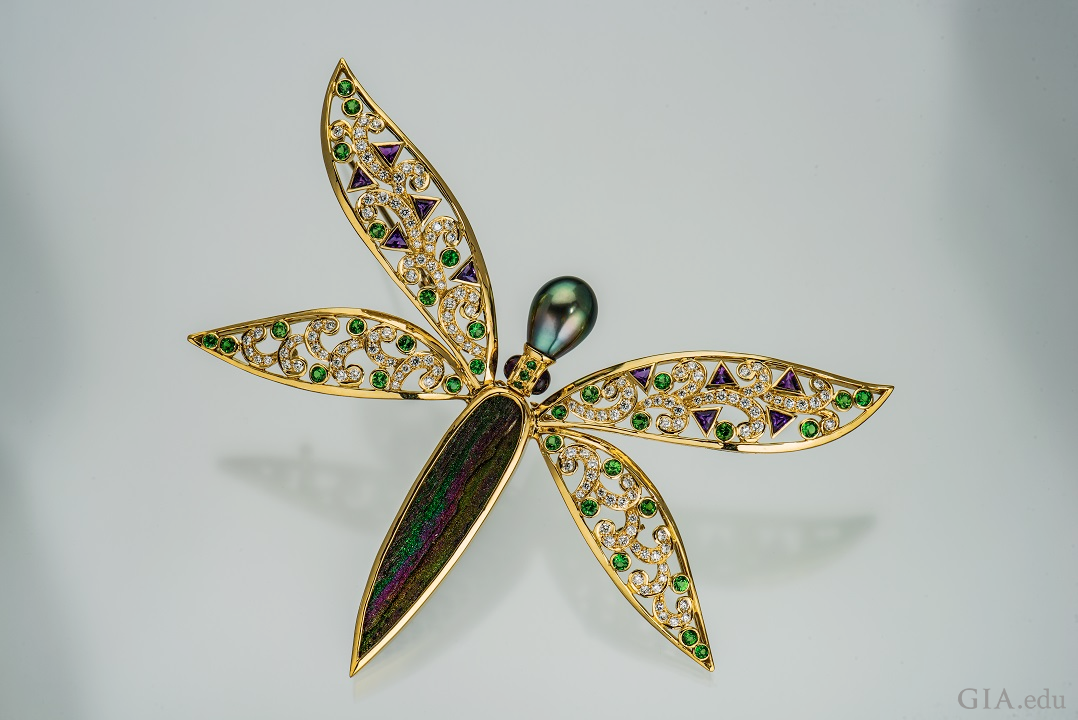 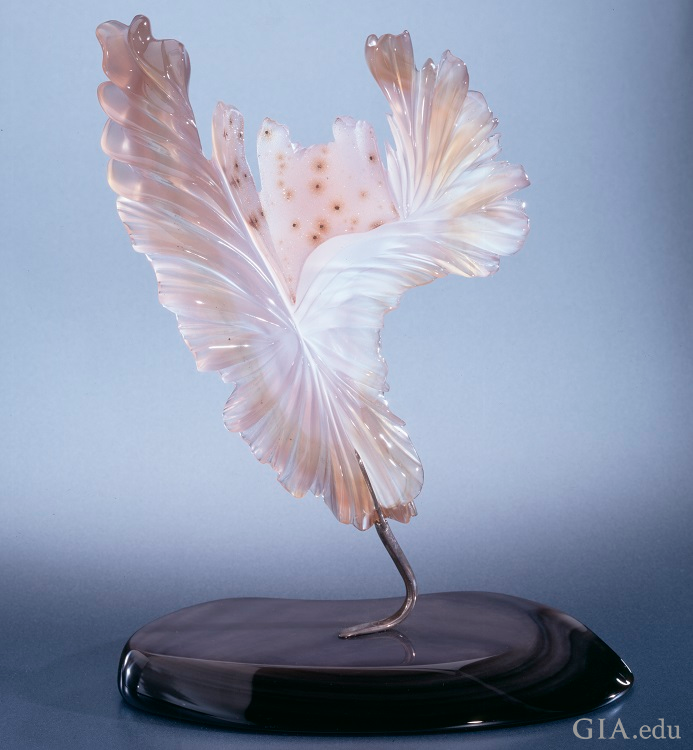 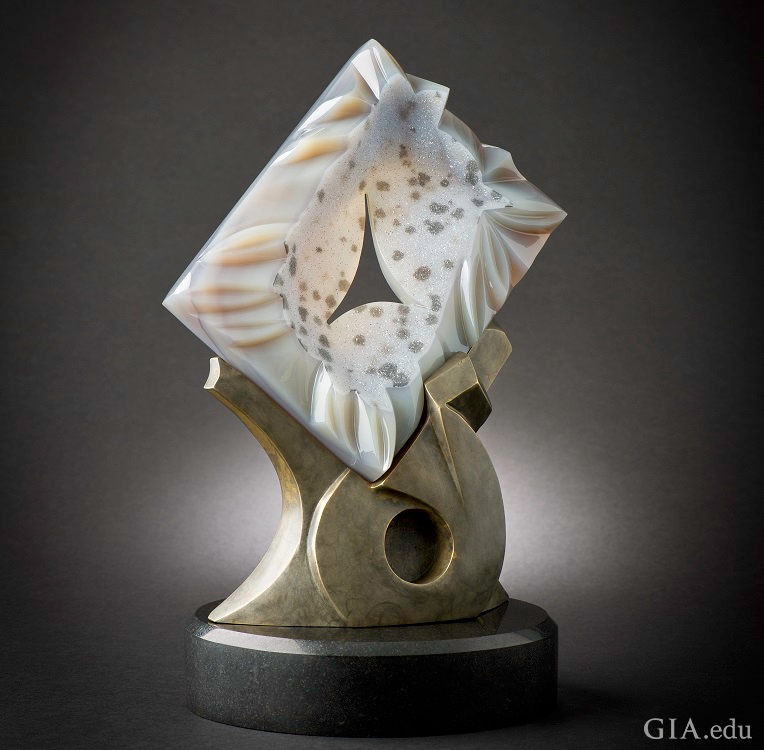 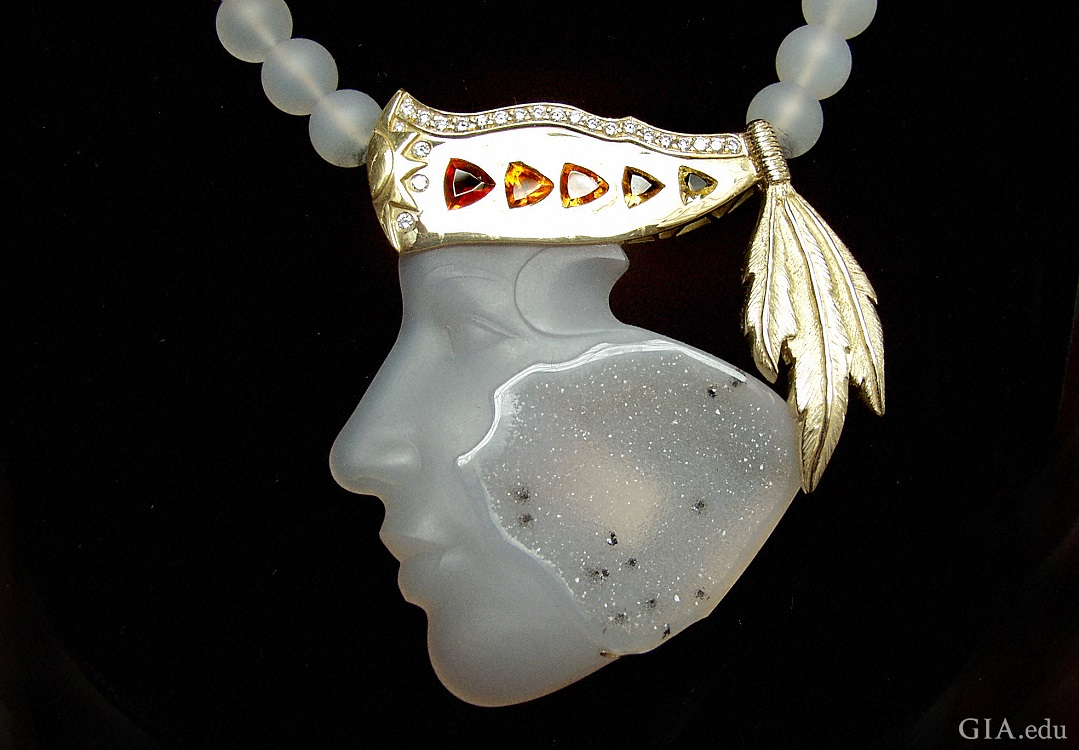 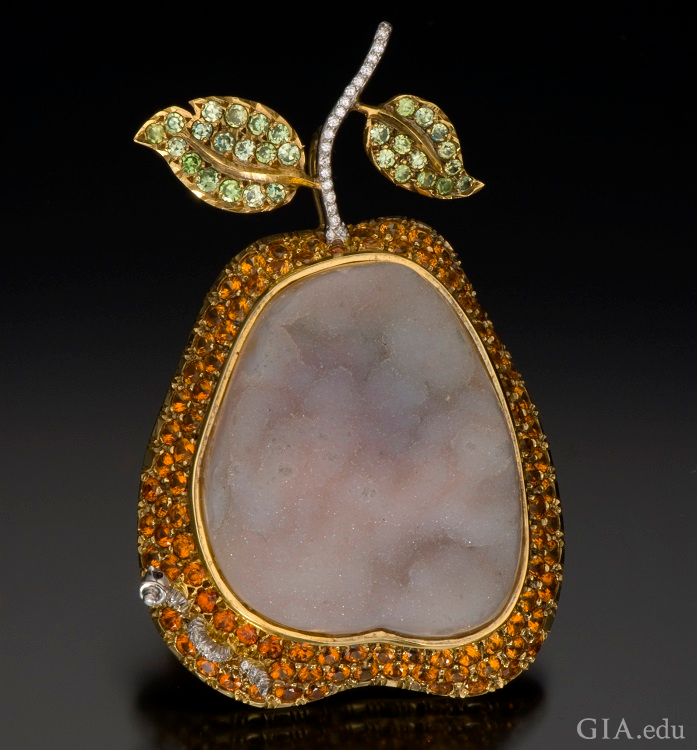 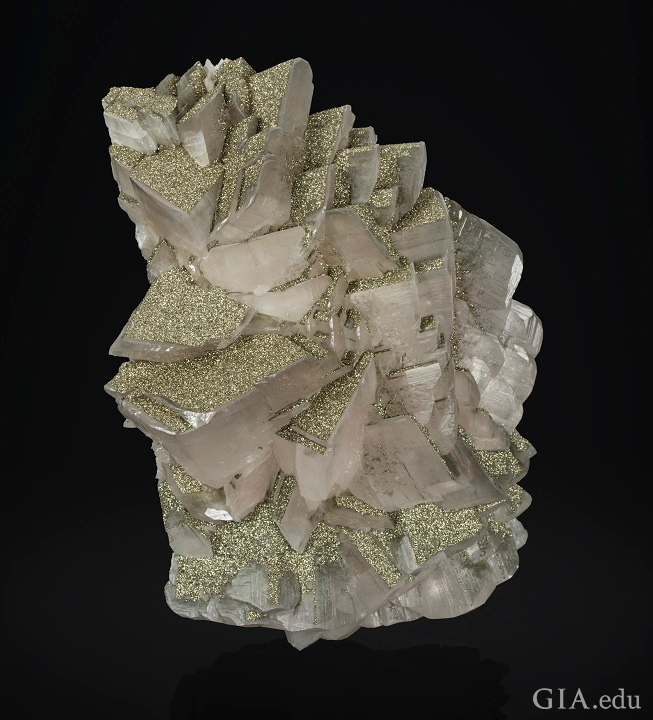 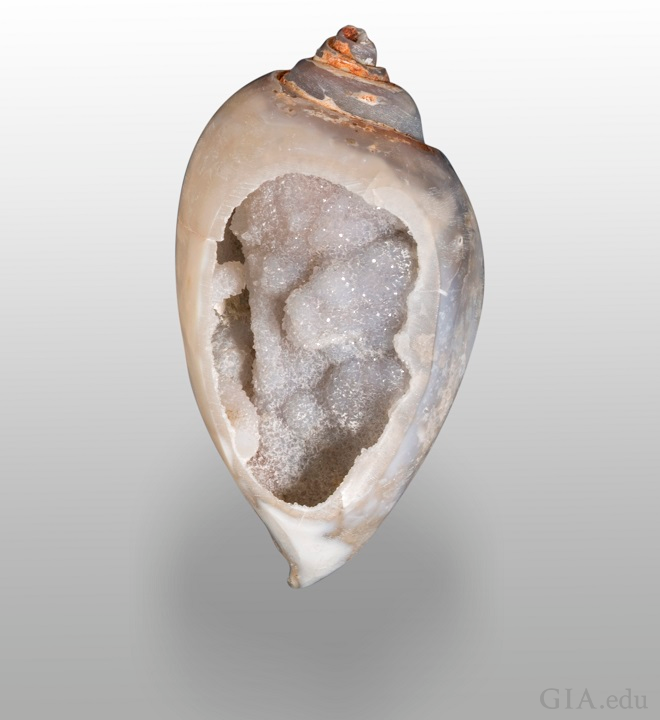 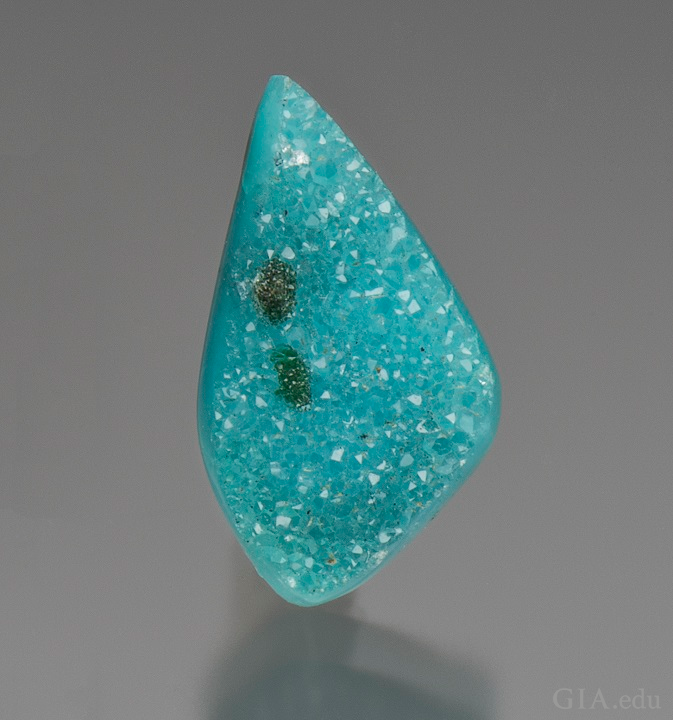 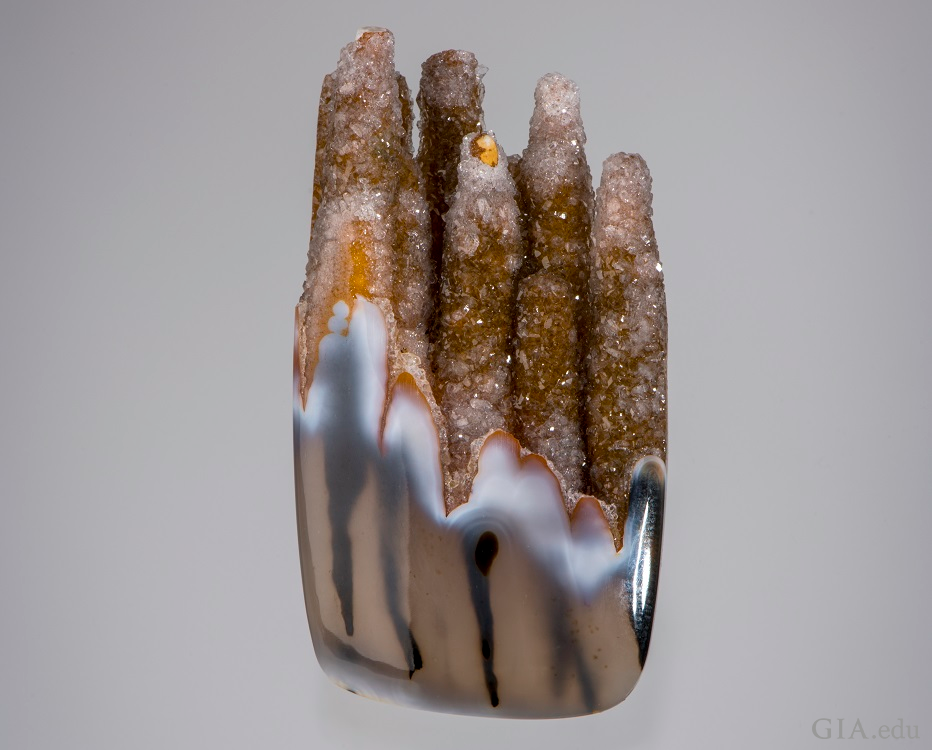 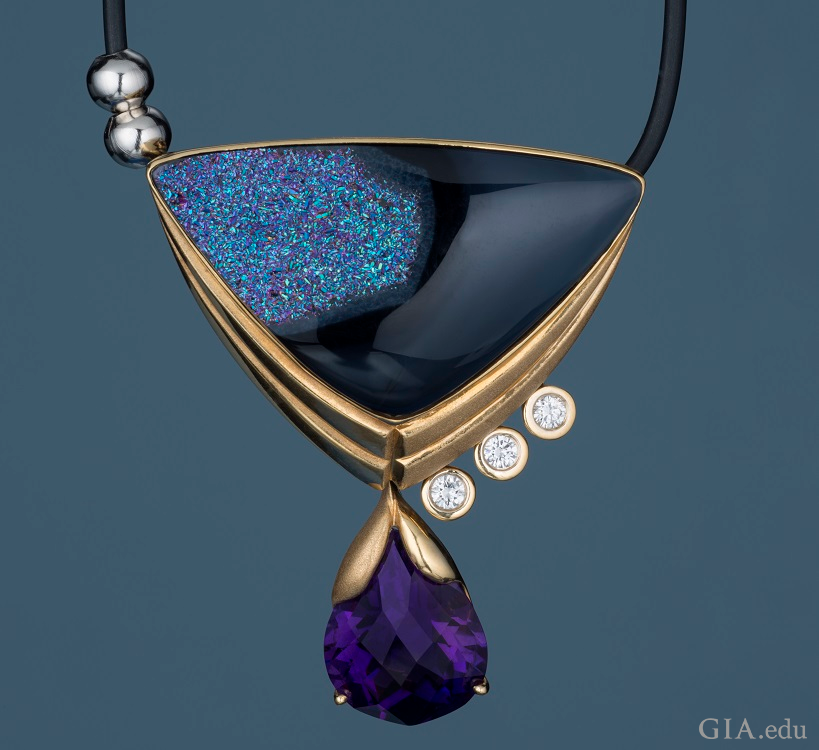 Colorful natural drusy materials are rare; pink is a rare and coveted color in the gem world. Natural pink cobaltoan calcite drusy material is trending with designers for its coveted combination of color, rarity and sparkle. It was first discovered on Elba Island, Livorno Province of Tuscany, Italy in 1910 and can also be found in other countries in Europe and in Africa.

Rainbow pyrite, the trade name for natural iridescent pyrite drusy, was first seen in the trade in the late 1990s and has been found in only one location in the world – along the banks of the Volga River in Russia. Rainbow pyrite is famed for its iridescence, caused by refraction and diffraction of light, and its metallic luster blends beautifully when set with all metals. Top quality material can shimmer in a spectrum of color, including gold, green, pink and blue. Rainbow pyrite also has a stunning array of bright golds, brassy coppers, blues, greens and rose hues, and has been said to resemble fancy color diamond melée. 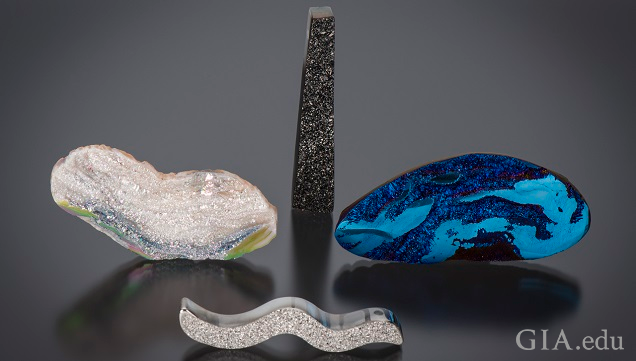 Rainbow colors and metallic sheen may occur naturally, but others colors are a result of gemstone treatment. Titanium drusy is created in spectacular iridescent shades of white and blue by a titanium coating process applied in a vacuum chamber. Electroplating, a process similar to rhodium application, gives drusy a fancier and brighter appearance than its natural counterpart. Colorful crystals are sometimes coated with a film of gold, platinum, sterling silver or titanium.

The display of Perry Brent Davis’s carvings of agate and gem quartz at GIA’s Carlsbad campus looks like a colorful seascape of otherworldly designs.