Paula Crevoshay’s American Collection, created as a cultural and artistic inheritance for future generations, featured gemstones from the United States. The first pieces we saw were from her “Rainbow Over Montana” collection of rough and faceted Montana sapphires (figure 1). She used the faceted sapphires to show “the story of light” told by the gemstone after the human contribution of cutting, while the crystal slices display the natural hexagonal shape and luster of the flat crystal faces. The blue faceted stones represent the “Big Sky Country” of Montana, and the crystals demonstrate the range of rainbow colors in Montana sapphire.

The next piece was a pin featuring a 31.34 ct bicolor pink and green tourmaline (figure 2) from the Stewart Lithia mine in San Diego County, California. The stone was purchased back from a customer who had bought it from Paula’s late husband, George Edward Crevoshay, who first cut the stone more than 30 years ago. The pink and green tourmaline melee in the piece was also cut by Mr. Crevoshay and came from the Stewart Lithia mine. Besides featuring gemstones from a famous U.S. mine, this piece carries the sentiment of a great love that inspired Paula Crevoshay to move from painting and sculpture into the world of gemstones and creating jewelry. 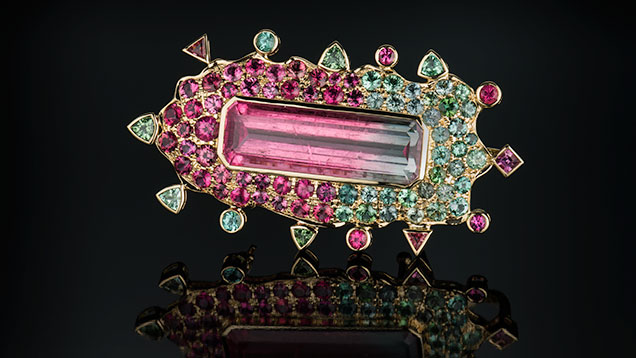 Figure 2. This 31.34 ct bicolor tourmaline pin, which contains gemstones exclusively from the Stewart Lithia mine in San Diego County, has an emotional connection for the artist. Photo by Robert Weldon/ GIA; courtesy of Paula Crevoshay.

The third piece (figure 3) was a ring that contained one of the most intense red Oregon sunstones the authors had ever seen. The stone features the trademarked “Medicine Wheel” cut by award-winning lapidary Larry Woods. The ring also contains red spinels and diamonds. 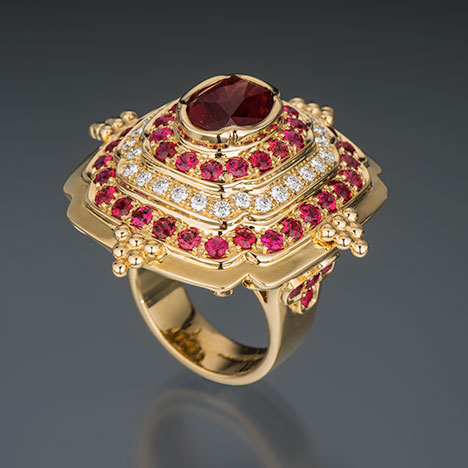 Figure 3. While not as large as some of the other colored stones used by Paula Crevoshay, the intense color and unique cut of the 2.77 ct Oregon sunstone makes this ring one of her favorite pieces. The center stone’s color is complemented by 3.24 carats of red spinel. Photo by Robert Weldon/GIA; courtesy of Paula Crevoshay.

While visiting her booth at the AGTA show, the authors also noticed some nontraditional stones ingeniously incorporated into jewelry. The first two pieces we viewed contained center stones of sphalerite (figure 4, left) and sphene (figure 4, center), both in pendants. For Ms. Crevoshay, creating jewelry is all about working with light. How she selects and combines gems depends on properties such as refractive index, bodycolor, luster, and phenomenal optical effects.

Figure 4. These Paula Crevoshay jewels include gems not typically used in jewelry. Left: The 8.25 sphalerite pendant creates an eye-catching fire, complemented by the play-of-color of the opal and the colorful sparkle of the diamond melee. Center: The green color of the 11.78 ct sphene pendant is accentuated by tsavorite melee, with the orange fire opals offering a striking contrast. Right: This dragonfly pin features a 38.24 ct hematite drusy as the insect’s body. The drusy’s iridescence and sparkle creates a shimmering effect that is intensified by the orient of the Tahitian cultured pearl used for the head. Photos by Robert Weldon/GIA; courtesy of Paula Crevoshay.

Both sphalerite and sphene are highly dispersive, and the flashes of rainbow color created by the dispersion excite the eye. For the sphalerite piece, she added Mexican opals showing a rainbow of colors, combining a highly dispersive gem with phenomenal accent stones to create a dance of colors across the pendant. The pendant also contains cognac and colorless diamonds to create even more of a symphony of colors. Ms. Crevoshay chose the sphene for its high dispersion and her attraction to the green bodycolor. As with the sphalerite pendant, she added Mexican opals showing a subtle rainbow of phenomenal colors. With both pieces, she combines gemological knowledge with art to create jewelry that paints with the surrounding light.

Another piece that caught our attention was a dragonfly containing rainbow hematite drusy as the insect’s body (figure 4, right). With the hematite, Ms. Crevoshay was able to highlight the iridescent colors and sparkle of the drusy. She finds that the rainbow colors of the hematite are not as bold as those caused by dispersion from the sphene and sphalerite but still have a seductive effect.

Public awareness of gemstones such as sphene and sphalerite has been growing thanks to high-end designers such as Paula Crevoshay and through mass marketing of commercial jewelry on television. Ms. Crevoshay told us she often piques customers’ interest by informing them about some of these lesser-known gem materials and how light interacts with them. The authors found this to be a fascinating look at how stones that were once a gemological novelty are becoming more widely known.