A flower garden may seem like a quiet meditative space, but it’s actually abuzz with activity.

Butterflies, dragonflies and hummingbirds flitter about, while earth-bound spiders, caterpillars and lizards keep a slower pace. Flowers reign as the garden’s crowning jewels.

Never ceasing to fascinate, these delightful garden creatures and the flowers they visit are favorite subjects that transform beautifully into Victorian, Art Nouveau and modern jewelry designs.

Victorian jewelry in the early 19th century was influenced by a heightened interest in botany and zoology that stemmed from the scientific classification of plants and animals. These designs followed accurate representations of the natural world of insects and flowers. Fashion-conscious women pinned jeweled insects to their hairdos and gowns and a Victorian enamel spider brooch with articulating legs may have graced a coiffure. 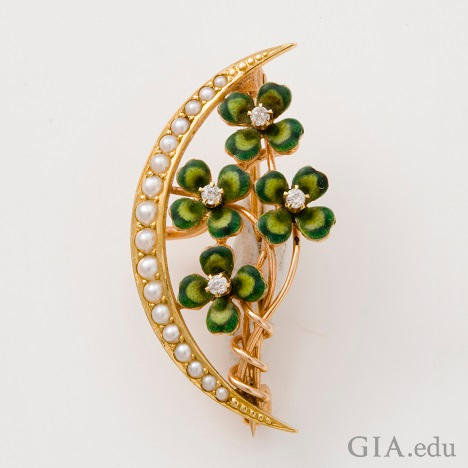 Green enamel lends color to the clover design of this crescent brooch set with pearls. Tiny diamonds at the center of each cloverleaf add a dash of sparkle. The brooch is late Victorian or late 19th century, by Krementz. Courtesy of Mary Matthews. Photo by Valerie Power/GIA

Diamonds, discovered in South Africa in 1867, were used in pins and brooches to add sparkle to insects, animals, crescent moons and stars, as well as mythical creatures, such as dragons and griffins. Seed pearls were also used as accents in floral and natural motif Victorian jewelry.

Snakes became popular in early Victorian jewelry as a symbol of love. Their popularity was influenced by Prince Albert’s engagement ring to Queen Victoria, which featured a serpent with an emerald set in its head. British royalty continues to set trends in engagement jewelry.

In contrast, Art Nouveau, which developed in France and Belgium in the mid-1880s, also focused on the natural world, but with a tendency to interpret, rather than imitate nature. This is due in part to the influence and popularization of Japanese art, which is credited as the single most important contributing factor to the development of Art Nouveau. This new style flowed through Europe and reached as far as Russia and the Americas, a refreshing change from the more austere Victorian designs. 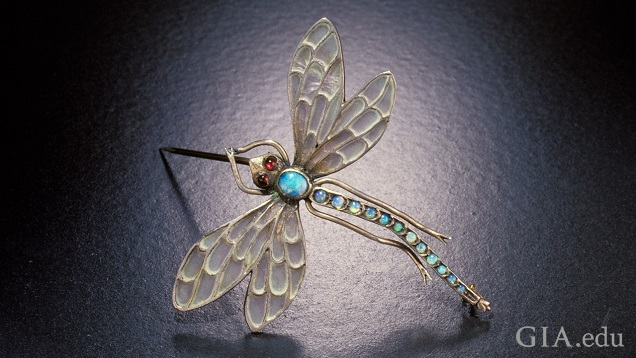 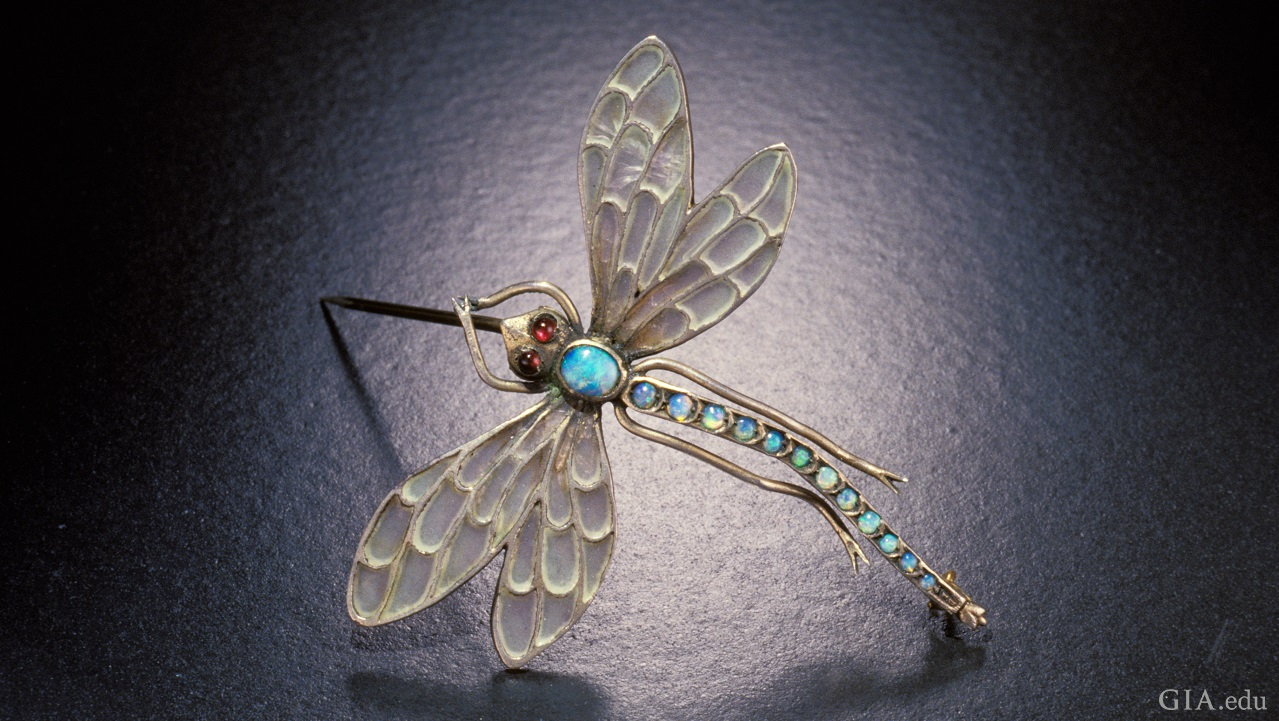 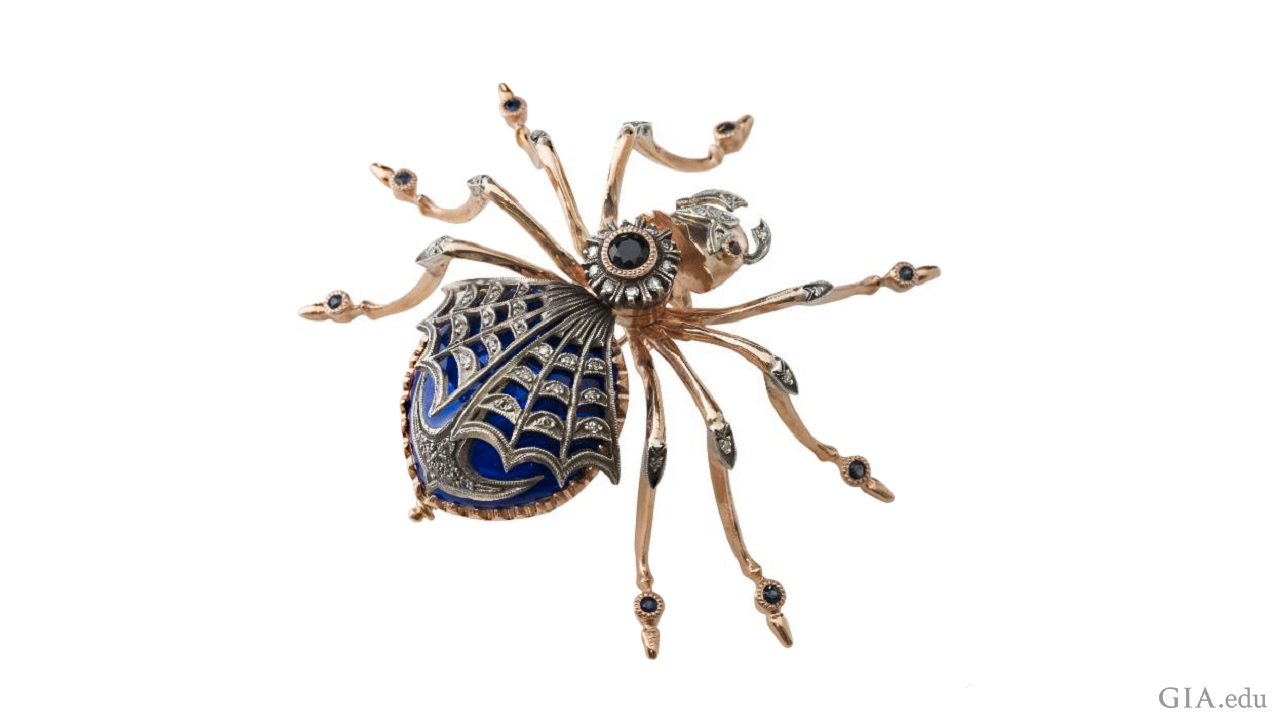 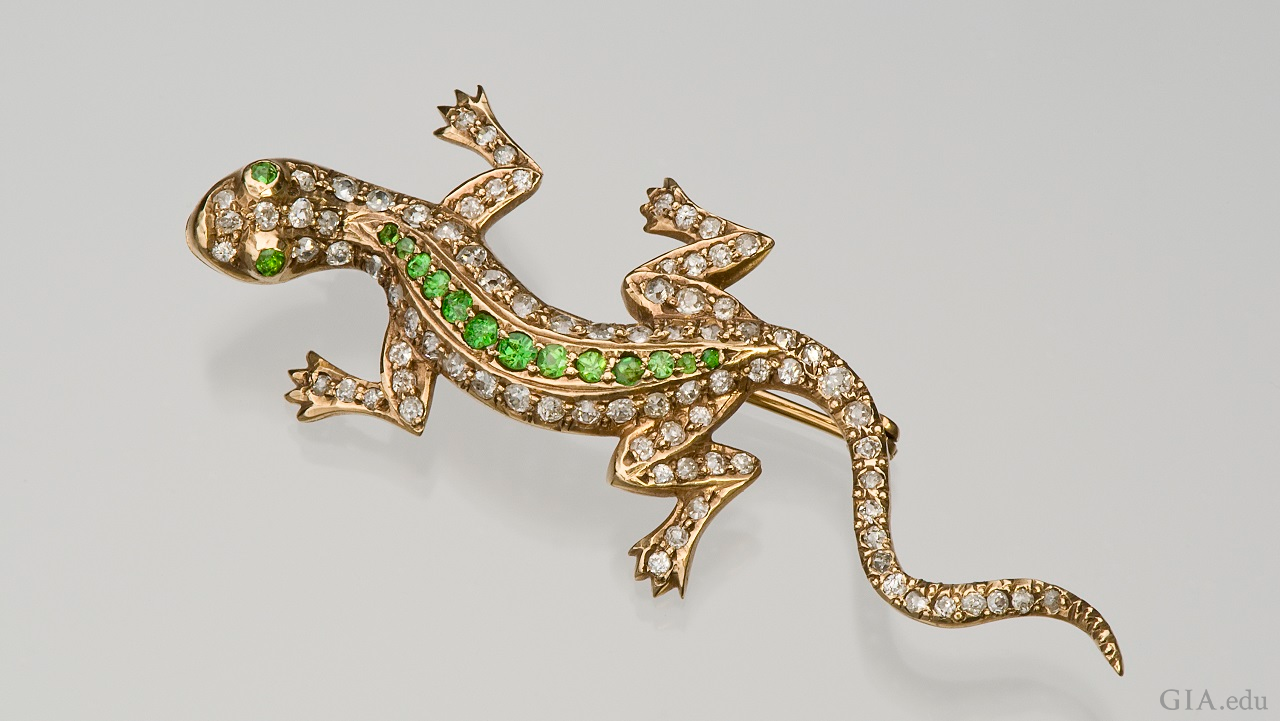 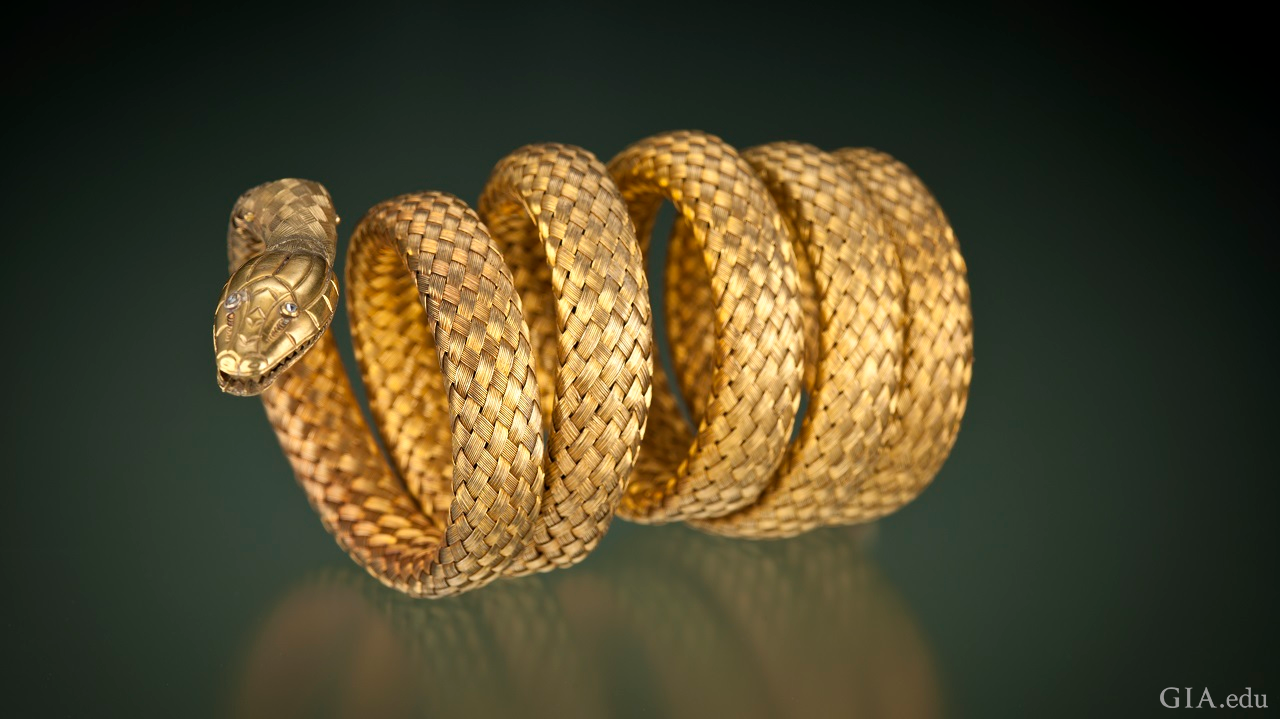 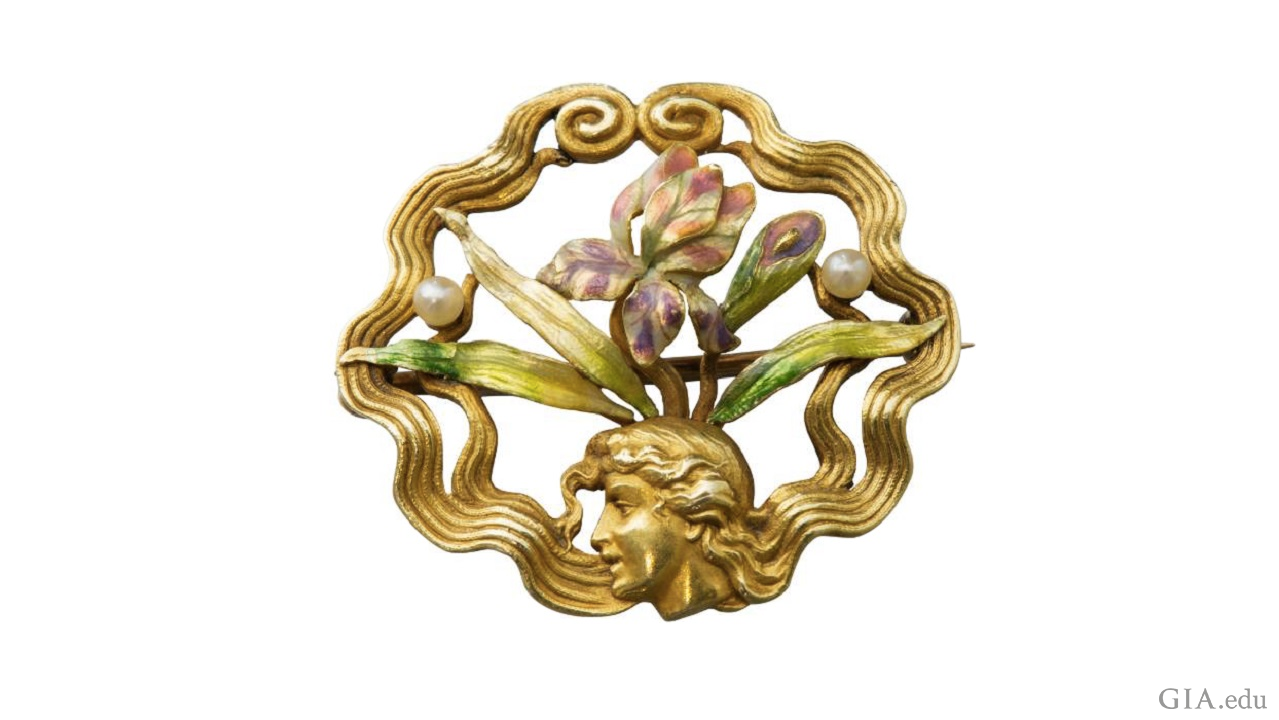 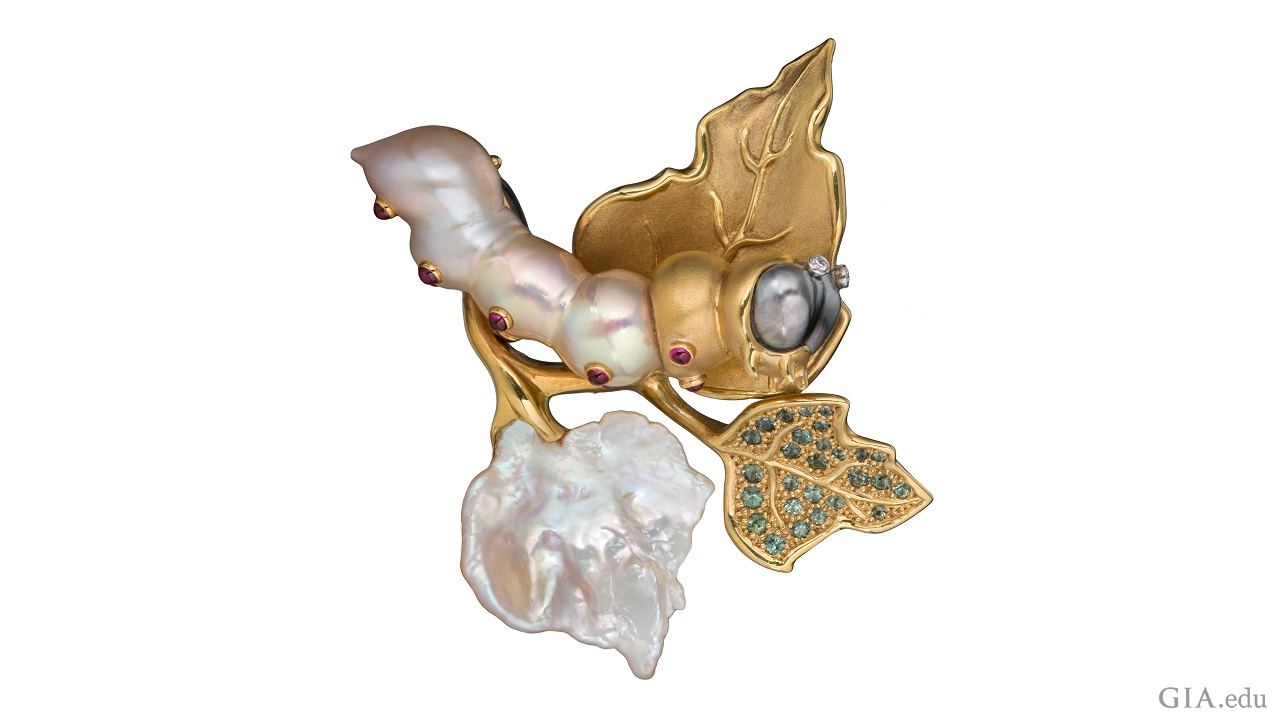 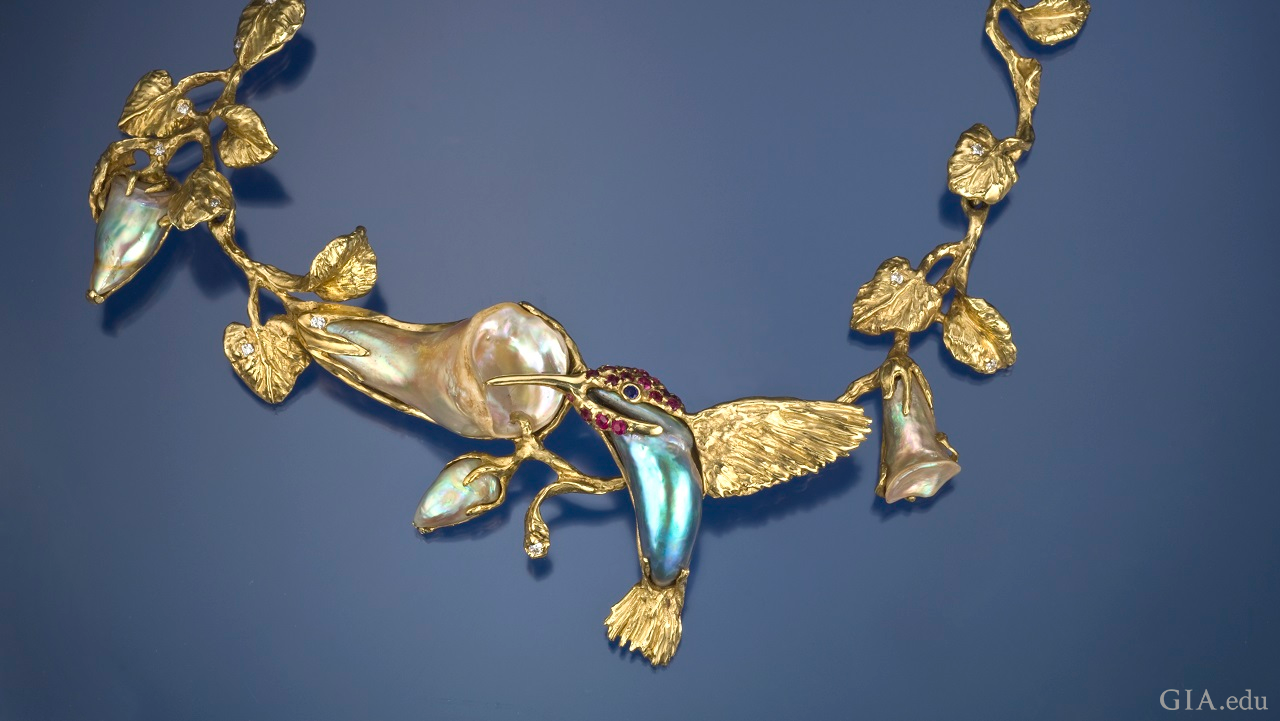 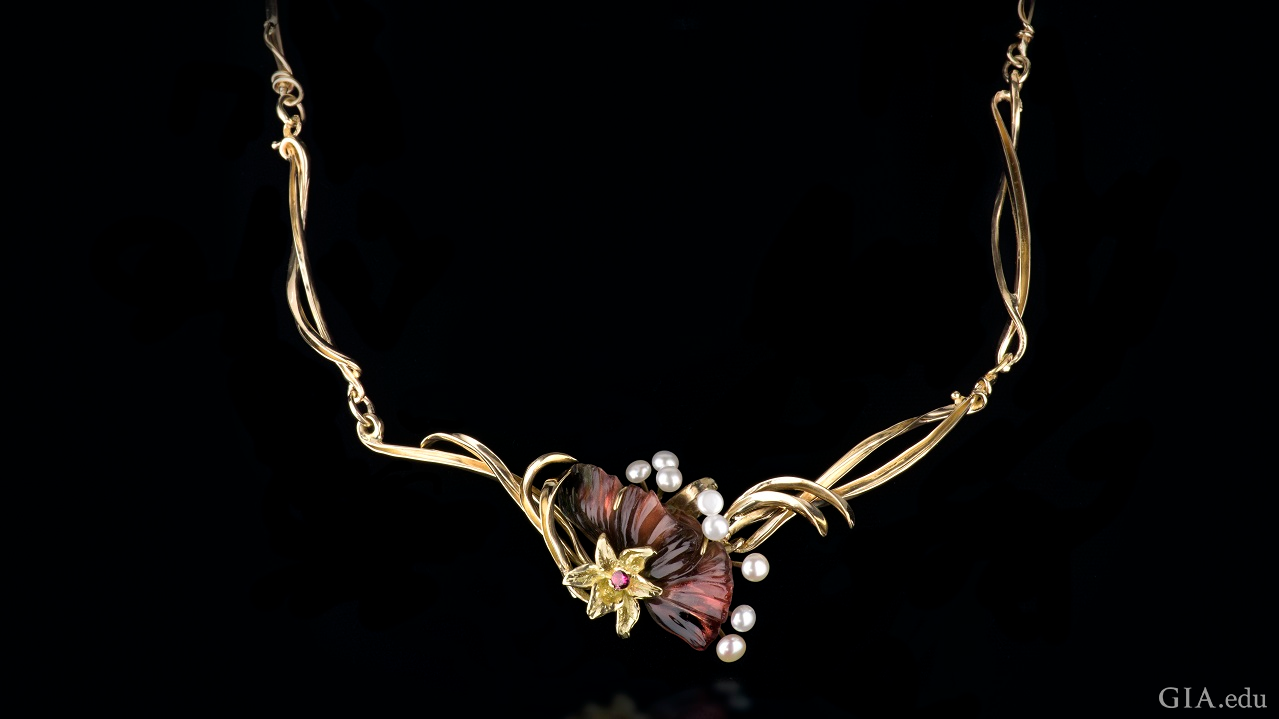 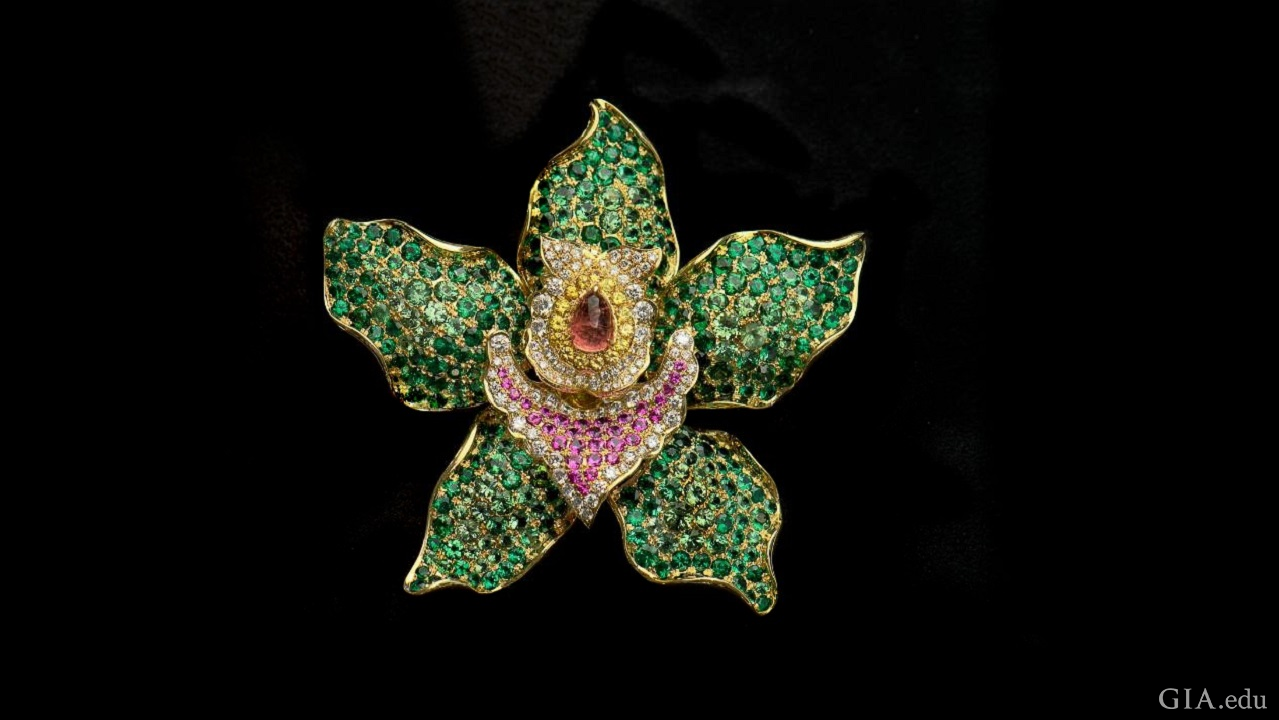 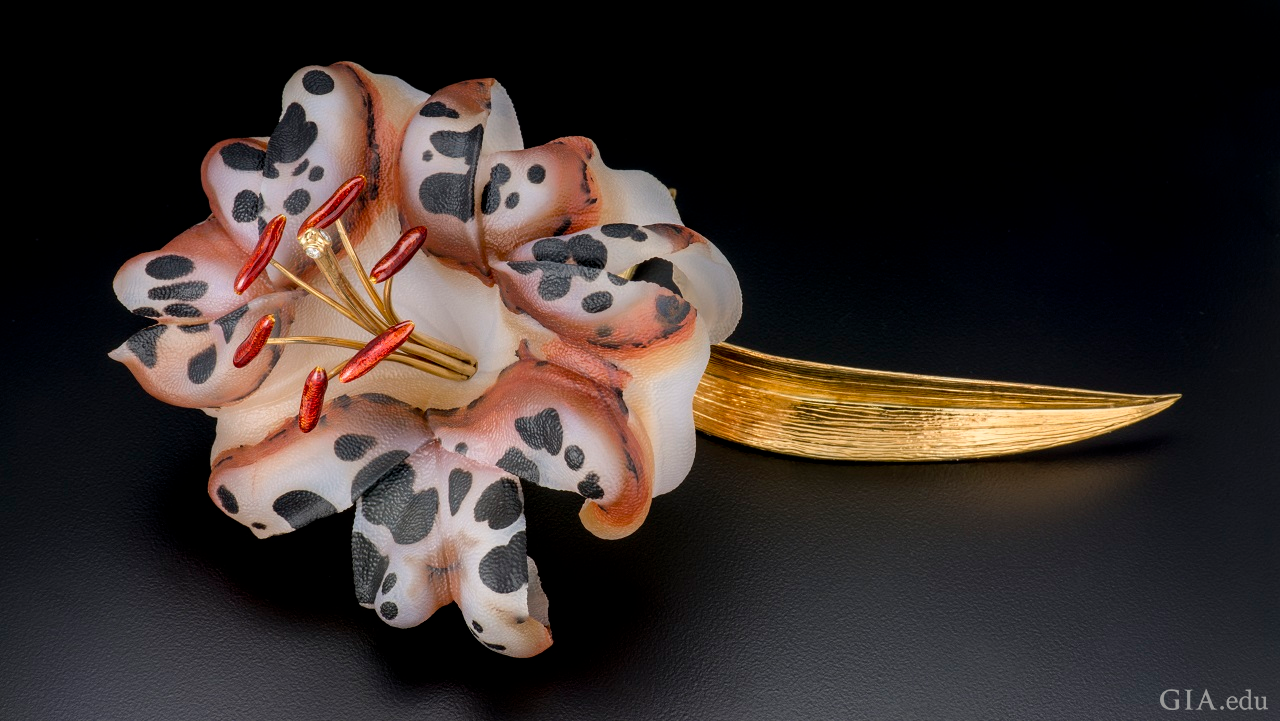 Enameling, popular in both Victorian and Art Nouveau jewelry, was the perfect technique for representing both the movement and the delicate colors and designs of flowers, leaves and insects, which in many cases could not be conveyed with gems alone. Plique à jour, an enameling process constructed in such a way that light transmits through the enamel, making it appear translucent, is well-suited to represent winged insects such as dragonflies or butterflies. Art Noveau jewelers were also attracted to opal, especially for its play-of-color.

George Fouquet, a leading jeweler of the Art Nouveau movement, created lavish, jeweled wings adorning the female figures and heads of butterflies and dragonflies, in the 1880s. He used flowing, graceful lines sometimes referred to as “whiplash,” to suggest movement. 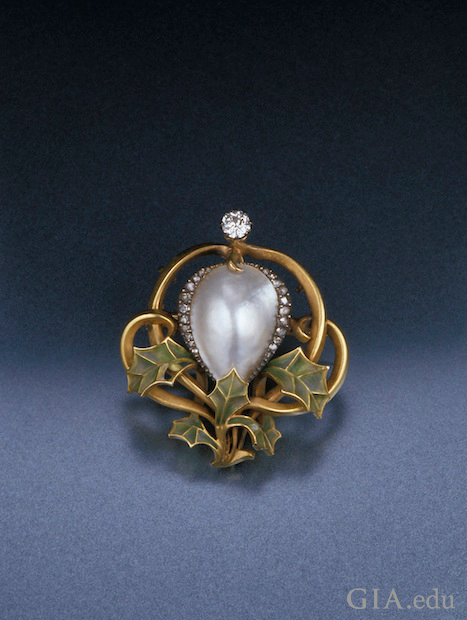 The natural blister pearl pin, with green enamel leaves and diamond accents, is in the style of George Fouquet, a leading jeweler of the Art Nouveau movement. Photo by Robert Weldon/GIA

The natural world of flowers and insects continue to inspire modern designs. Hints of bygone eras, and new representations of flower gardens, can be seen in today’s jewelry. Colored gemstone materials are often more available than they once were, and are faceted with precision, or carved with great artistry. Pearls, still popular, are paired with colored gemstones, diamonds and enameling to help render a design.

So before you swat a caterpillar from your best friend’s shoulder, check to make sure it is not a jeweled insect!