The art of filigree inlay, also called “fine gold art,” combines two craft skills. One is filigree, which includes such techniques as nipping, plaiting, jointing, piling, filling, and knitting, and uses gold or silver threads of different weights. The second component, inlay work, involves mounting the stones to the final product and carving or filing the precious metals. The craftsperson can use one or both skills when creating a piece.

Filigree inlay art originated in the Warring States Period (475-221 BC). At the time, it was called “Jin Yin Cuo,” which involved painting gold and silver on the surface of bronze artworks. With the development of techniques for making thin gold and silver thread, which occurred around the Tang (618-907) and Song (960-1279) dynasties, filigree inlay art advanced in maturity.

The art form developed by inheriting essential elements from the previous dynasties and adding new elements over time. Many filigree inlay pieces seen in a private art museum run by the premium jade jewelry brand, Zhaoyi, are replicas of masterpieces from Ming and Qing dynasties.

For a long time, filigree inlay artwork was controlled and appreciated only by royal families and the imperial class. Ordinary people were able to afford some products, but were prohibited from owning pieces bearing certain themes like the dragon and phoenix. Only the royal class could own the highest-quality materials and designs.

Social catastrophe at the end of the Qing dynasty meant the imperial family could no longer hold its position and afford luxury items. Many master goldsmiths escaped the palace to open their own businesses. For a while, many small-scale filigree inlay art studios and workshops were concentrated in southern Beijing, which once had been an area full of all kinds of craftspeople. 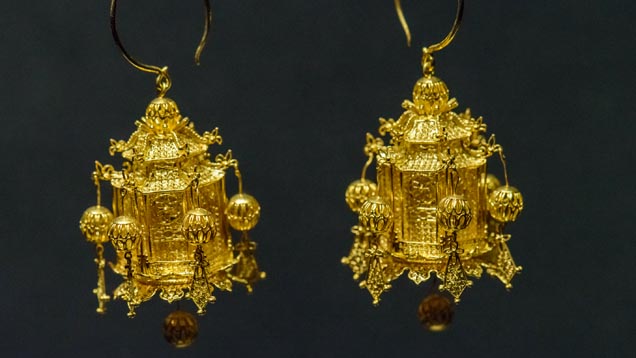 This pair of earrings is a replica of a Ming dynasty masterpiece. The earrings are 3-D replicas of lamps used in the Forbidden City. The lamps imitate pavilions with hexagonal profiles. Goldsmiths added seven spherical pendants to the pavilions. When the wearer moves, the pendants swing back and forth. Photo by Eric Welch/GIA. 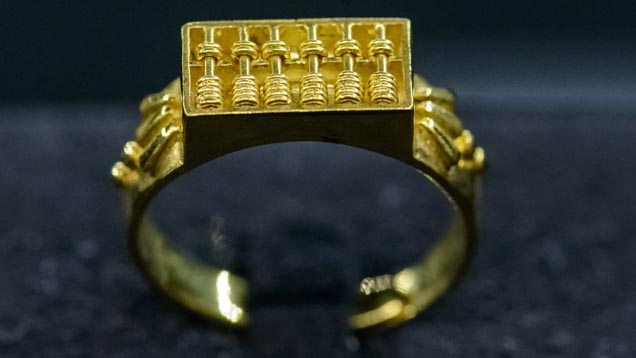 This is a replica of a Qing dynasty ring, once used as a gift from the mother-in-law to the new daughter-in-law, expressing wishes that she become a smart wife who benefits the family economically. By applying fine gold art, each small bead on the abacus can move freely. Photo by Eric Welch/GIA.
By the end of the 20th century, after the many social upheavals China had experienced over the previous 150 years, filigree inlay art was one of many cultural heritages that were fading away. Very few master goldsmiths were still able to work in this art form, and young people rarely devoted themselves to the diligence and hard work required. Another barrier came from the Cultural Revolution (1966-1976), when wearing or owning jewelry or simply being pretty was considered offensive.

The drafting, internationally, of the concept of Intangible Cultural Heritage in the early 2000s made it possible for filigree inlay art to be picked up and passed along to future generations. (The concept of Intangible Cultural Heritage encompasses practices, knowledge, and skills that are recognized as part of a country’s or community’s cultural heritage.)

Due to the outrageously high costs required for creating art pieces with filigree inlay art, very few people wanted to invest the money to start from scratch. At this critical moment, the collaboration between Zhaoyi and master goldsmith Bai Jingyi caught people’s attention. Before this collaboration, Master Bai had refused invitations from many jewelry companies due to conflicting interests. President Wang from Zhaoyi reassured Master Bai that making fast and major profit on filigree inlay art was not the company’s goal.

Zhaoyi, which began as a brand that specialized in jadeite, decided to contribute to the continuation of this almost-lost art. This time, Master Bai agreed and they established her studio about four years ago. Zhaoyi also supported Bai’s idea of developing the skills first and then creating some originally designed products. 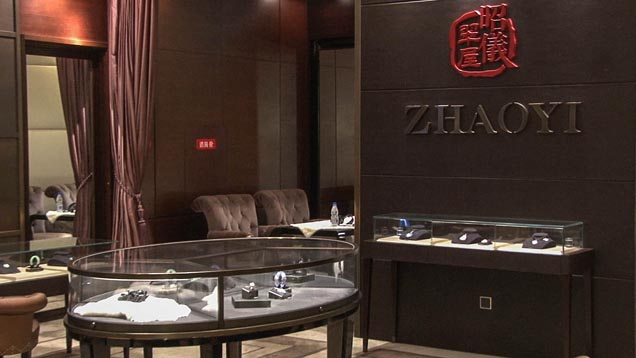 Zhaoyi, a famous premium jadeite brand, collaborated with Master Bai to create a filigree inlay art studio. The company uses profits from the jadeite business to support the haute couture filigree inlay art business. Photo by Pedro Padua/GIA.
For the past four years, Master Bai has spent most of her time teaching new artists and young apprentices, making replicas of famous historic pieces, and creating new designs using traditional skills. In Zhaoyi’s Beijing Xin Tian Di guild store, with its three-story layout, two levels are used to display filigree inlay art replicas and new designs. Located on the third floor is the only private filigree inlay art museum in Beijing. Numerous masterpieces from Bai’s studio are displayed there. As Master Bai and her colleagues are making progress on passing this craftsmanship along to the next generation, they are also working on creating new products to fit the high-end jewelry market in China. 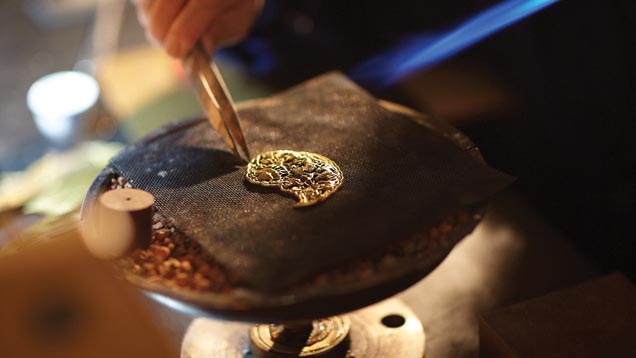 After working as a goldsmith and designer in the filigree inlay industry for over 50 years, Bai expressed her deep love for this art style to some contributors.

Her family is made up of the “Man” minority, who formed China’s Qing dynasty. Influenced by her family tradition, she had fallen in love with painting when she was a little girl. Once, she dreamed of becoming a famous painter, but this dream did not come true due to different circumstances and life-changing opportunities she experienced later in her life. 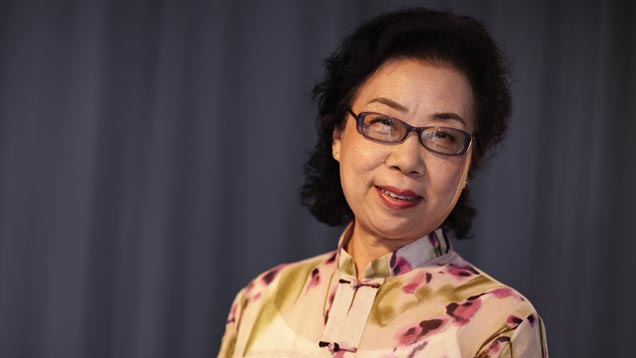 Master goldsmith and chief designer Master Jingyi Bai creates filigree inlay art and trains others to carry on its traditions. Courtesy of Zhao Yi Xin Tiandi Co., Ltd.
Other than painting, Bai was also very interested in pattern design. This provided a good basis for her entire design life. As a precious-metal major in school, she gained some of the needed knowledge and skills to make artworks like filigree inlay, enamel, etc., but she felt those skills were not enough to make her a successful master goldsmith and designer. She made the most progress after she started working in a real filigree inlay art factory and was trained by some older-generation master goldsmiths.

For the past 50 years, Bai has devoted herself to the tradition and development of filigree inlay art, receiving numerous honors and achievements. In 2008, the state council officially named filigree inlay art as the Intangible Cultural Heritage of China. Master Bai was selected to be the official Representative Inheritor at the same time. This honor and its responsibilities, plus her collaboration with Zhaoyi, brought her career to new heights.

With support from the company and her colleagues, Bai made many famous replicas of historic filigree inlay art pieces. One example is the “Six Dragon and Three Phoenix Crown.” She and her colleagues applied not just fine gold art to this piece. She also applied another almost-lost skill called “kingfisher feather skill.” The kingfisher is a beautiful bird with feathers on its back displaying very attractive and lively blue color. Old craftsmen pulled the feathers off a living bird and then mounted them in different jewelry pieces. It was an art used mostly by the Imperial family. In 2012, the “Six Dragon and Three Phoenix Crown” masterpiece was named the Beijing Arts and Crafts Treasure. 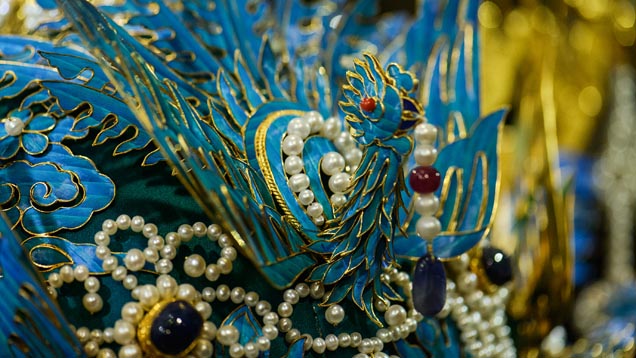 Details were created using the ancient kingfisher feather skill on this “Six Dragon and Three Phoenix Crown” masterpiece. Photo by Eric Welch/GIA.
Now, Master Bai still works full time in her studio as the chief designer for Zhaoyi’s filigree inlay art haute couture services. She is pleased to see more and more young people joining her as apprentices to inherit this old but exquisite art. She expresses pride in them and tries her best to pass those skills on to the next generation. 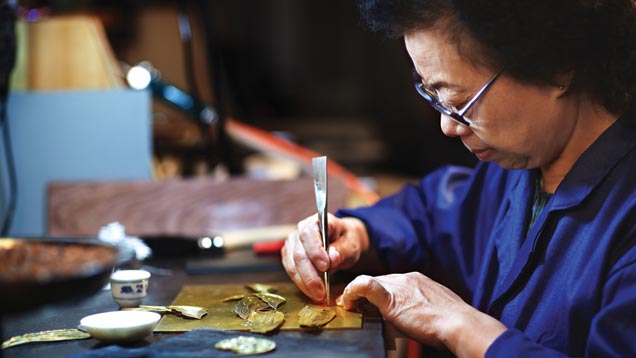 The market for filigree inlay artwork

Although Master Bai and her group focus mainly on the filigree inlay art high-end market, she admits that there are two parts of the market as a whole. Many small-scale workshops around the country have limited investment levels and different interests. Their goal is not to inherit or pass the skills along to the next generation, but rather to make some quick money with relatively low-quality filigree inlay works, or add some filigree elements to other rapidly made products. These products dominate the souvenir market.

Master Bai originally thought that her high-end products would only be consumed by successful businessmen or older-generation high-ranking government officials. To her surprise, some young people are highly motivated to buy her creations as well. One of the studio’s first individually designed jewelry sets was purchased by a very young couple.

In terms of domestic and overseas markets, Master Bai does not see much difference between them because “going back to traditions” seems like a non-stop trend in the fashion world. She has noticed that China’s young people are paying more and more attention to their traditions. She enjoys seeing young girls wearing fashion outfits with traditional jewelry pieces inherited from their mothers or grandmothers. As for overseas consumers, in addition to paying attention to the style, they also focus on the craftsmanship of a piece. Overall, the market outlook for filigree inlay art is very bright. 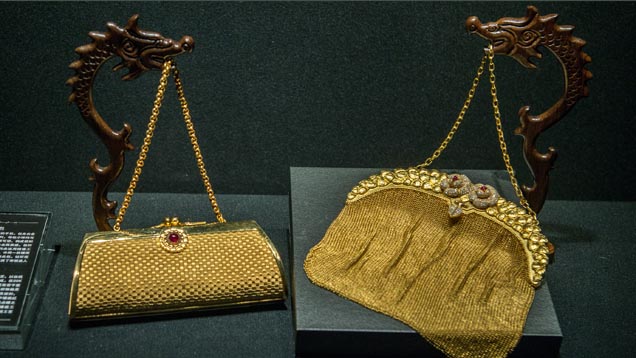 The future of filigree inlay art

As an Intangible Cultural Heritage of China, filigree inlay art has caught people’s attention and is being protected and passed along. Although there is hope in China of keeping this ancient art style and skill alive, there are some difficulties that can’t be avoided. First of all, there are fewer and fewer master goldsmiths. As time goes by, some skills will gradually be lost. More teachers are needed to pass knowledge and skills along to young people.

Secondly, more young apprentices are needed to inherit this art style. Some college graduates want to sit down and learn the skills, but to make sure there are enough people to inherit these skills and pass them along to the next generation, a larger inheritors’ pool is needed.

Last but not least, any type of art can be kept alive only when it can breathe on its own, which means it has to be alive in the real market, not just residing in some museums or appreciated by only a small group of people. Bai insists that even though the creation of replicas is necessary for picking up the almost-lost skills, she and her group will have to make modern designs that can be easily accepted by the current market and its consumers. This will result in keeping the art alive.

What Master Bai wants to tell young jewelry designers is that they need to absorb inspiration from both modern art and Chinese cultural traditions. As a big fan of western oil painting, Bai recommends that art students who want to be jewelry designers go overseas to learn modern art concepts and western artistic aspects. She also reminds them to not forget their own traditions, since that can distinguish them from others. As she says, the friction between western art and oriental tradition usually creates the most beautiful fireworks.

The authors would like to thank Master goldsmith Bai JingYi for sharing with us her extensive knowledge about, and unlimited passion for, her trade. We also thank the high-end jadeite retailer Zhaoyi for allowing us to spend many hours photographing and filming in their store and museum. Special thanks to Vivian Jiang and Grace Gao from Zhaoyi for arranging these remarkable visits. The authors would also like to thank Jianlin Xiong from China University of Geosciences for being our guide in Beijing.