In July 2013, a GIA team visited the China Diamond Exchange Center in Shanghai during an extensive trip undertaken to document China’s gem and jewelry industry. The trip was arranged by Dr. Tao Hsu, technical editor for Gems & Gemology, and the Exchange was an important part of the itinerary. 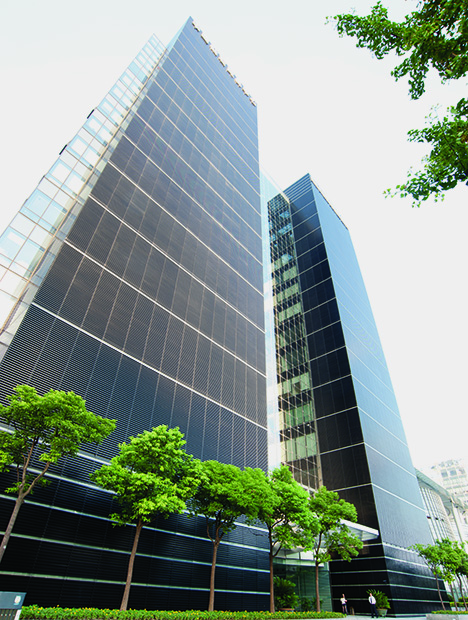 The Diamond Exchange in Shanghai is home to dealers, government agencies, a lab,
and shipping services. It is the central location for all of China's diamond imports and
exports. Photo courtesy of China Diamond Exchange Center.
The China Diamond Exchange Center is home to the Shanghai Diamond Exchange (also known as the Diamond Exchange). Before it was established in October 2000, taxation—including import tariff, value added tax (VAT), and sales tax on imported diamond—was around 35 to 40 percent. Diamond taxation policy is now very favorable in China, with a VAT of only 4 percent. (In reality, all goods imported into China are charged 17 percent VAT, but 13 percent is refunded for diamonds, leaving the net VAT charge on diamond at 4 percent.) This lowered taxation came about due to input from the Diamond Exchange, and it was instrumental in greatly reducing the quantity of diamonds smuggled into the country to avoid the higher taxes. 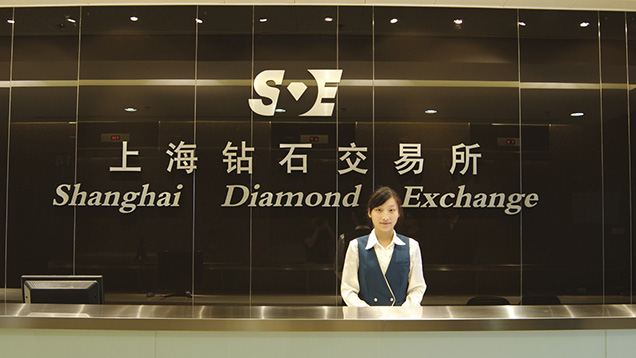 The Chinese diamond industry benefited greatly from the formation of the Diamond Exchange. Before it was established, official annual diamond import value was about US$1 million. By 2011, import value had reached over US$5 billion, of which $2 billion was imported solely into mainland China. While imports dropped by 10 percent in 2012 due to worldwide economic conditions, indications for 2013 are that the import figure will be higher.

The Diamond Exchange joined the World Federation of Diamond Bourses in 2004, and hosted the 33rd World Diamond Conference in Shanghai in 2008. 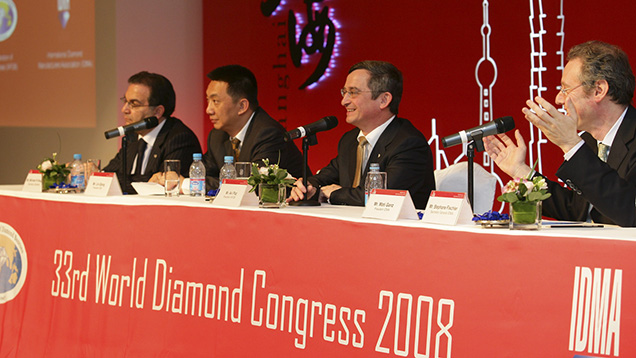 The Mission of the Exchange

According to Chinese law, all imported diamonds must go through the Exchange and several procedures must be followed. One of those is that diamonds imported into China must be declared and sealed in customs, or they are considered illegally smuggled. The diamonds are unsealed, inspected, and assessed by an expert at the Exchange before taxation is imposed. 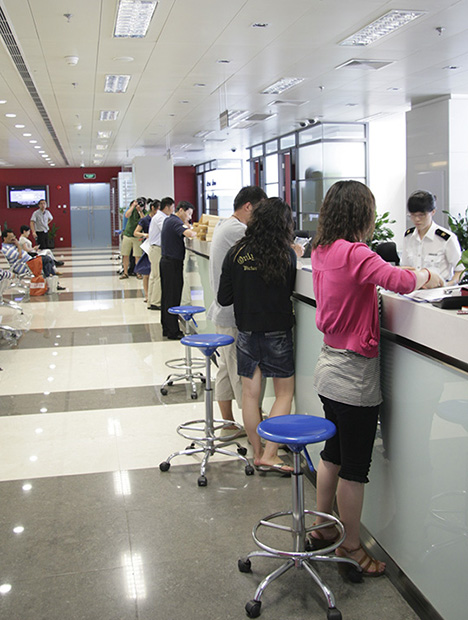 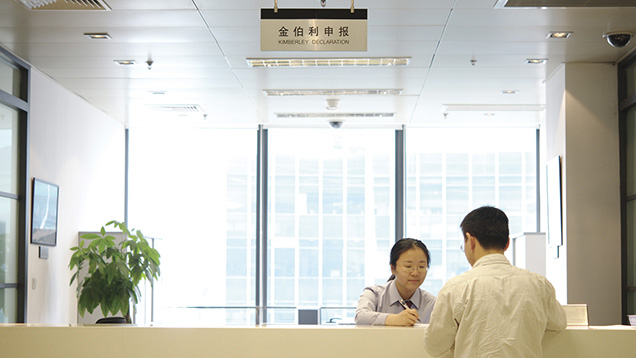 Kimberley Process certificates for rough diamond are inspected and registered in a specialized department of the Diamond Exchange. Photo courtesy of China Diamond Exchange Center.

The China Diamond Exchange Center is a totally open platform that welcomes diamond dealers from all over the world. It has more than 350 members, among which 67 percent are overseas members from Israel, Belgium, Great Britain, France, the United States, Japan, Africa, and other countries. There are 114 member diamond companies from mainland China, 62 from Hong Kong, 50 from India, 32 from Israel, 23 from Belgium, and the rest from other countries. 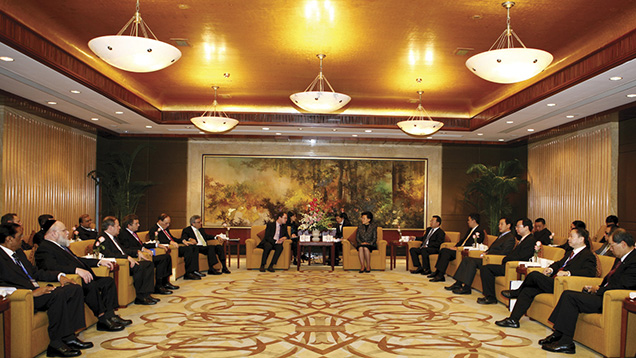 A diamond company that wants to be a member of the China Diamond Exchange has to meet certain requirements. The first requirement is that the company must have been engaged in the industry for at least three years and must be familiar with its operation. Secondly, the company must be introduced by two registered members of the China Diamond Exchange. A new member has to go through a one-year probationary period.

The third is a financial requirement: a mandatory US$20,000 one-time admission fee. The fee is refundable if a member wants to withdraw from the Exchange as a result of unsuccessful business endeavors or some other reason.

Another important condition is that a diamond company operating in China must be approved by the Diamond Administration of China (DAC) and registered according to Chinese law. After approval and licensing by the DAC, a company is allowed to engage in import and export business and take part in customs, tax administration, and Kimberley Process procedures. 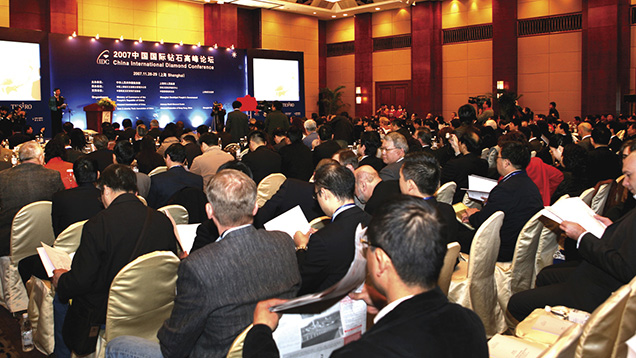 Main Functions of the DAC

The DAC and other government organizations jointly control everyday diamond imports and exports across the country as well as trade within the China Diamond Exchange.

The main functions of the DAC are administration and statistical analysis of national diamond imports and exports under normal trade conditions; examination and verification of transactions under rules of the Diamond Exchange, as well as supervision of the Exchange’s operations; and  coordination with other government officials inside the Exchange regarding issue relating to the diamond trade. The DAC also conducts examination and approval of the establishment of foreign-invested diamond companies, and daily regulation of their operations. It participates in the formulation of regulations and policies concerning diamond import and export and other diamond transactions, and provides  services to the Exchange and to domestic and foreign diamond companies.

The tower that houses the China Diamond Exchange Center is an impressive structure in Shanghai that covers an area of 49,000 square meters. The building is designed to be a one-stop shop for the diamond trade and boasts the latest in security, communications, and technology. The DAC is located in the tower, along with other diamond-related government organizations. 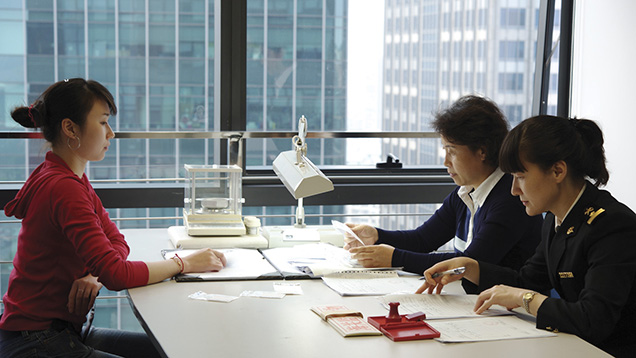 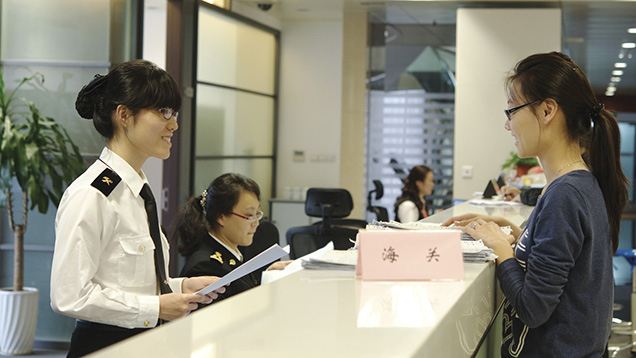 Diamond jewelry entered the mainstream Chinese market in the 1980s. Along with rapid economic and social development, the continual improvement of people’s living standards, and the fast rise of consumerism, diamond jewelry sales have been increasing at a rate of 15 to 20 percent a year. China is now the world’s second largest consumer market for diamonds, overtaking Japan.

China’s diamond-polishing industry also started to grow significantly in the early 1980s, and growth became more rapid in the 1990s. Currently, China is the second largest diamond-polishing country, after India. China polishes over six million carats of diamonds annually and employs over 50,000 polishers in more than 80 medium and large factories. Most of the factories are located in Guangdong, Shandong, and Shanghai. China has developed a niche for high-quality precision cutting and marketed their product as China Cut. 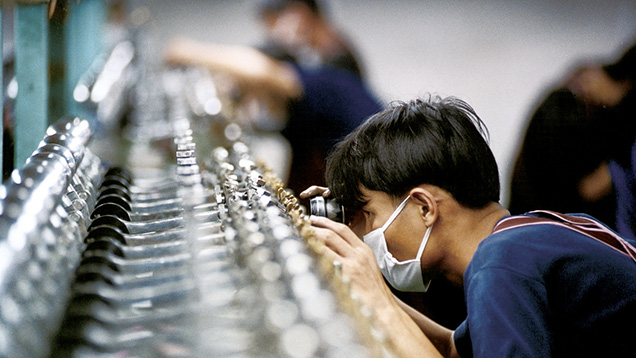 China has a thriving diamond-polishing industry. Photo courtesy of China Diamond Exchange Center.
Most of the diamond polishing in China is subcontracted work for foreign clients, who hire domestic firms to polish their diamonds. There are also numerous jewelry manufacturing firms producing diamond jewelry for export.

All of this phenomenal growth is due in part to the policies and organization of the China Diamond Exchange Center in Shanghai.
About the Authors

Andrew Lucas is manager of field gemology in content strategy and education at GIA in Carlsbad, California. Dr. Tao Hsu is technical editor of Gems & Gemology. Moqing Lin is a gemologist in the GIA's Hong Kong laboratory.

The authors thank Mr. Mu Li for sharing his valuable information with us during the interview and for introducing us to important diamond dealers. We would also like to thank Mr. Xiaobo Lang and Prof. Shouguo Guo for setting up our meetings with diamond exchange representatives.