Silicon carbide (SiC) is composed of a carbon atom surrounded by four silicon atoms in a tetrahedral form. Colorless synthetic moissanite is pure silicon carbide; the incorporation of impurities produces colors, including black. Its high hardness (second only to diamond) and thermal conductivity make it a convincing diamond simulant. Both transparent and opaque synthetic moissanites have been sub­mitted to GIA’s laboratory over the past two decades. In this report, we examine a 29.73 ct synthetic moissanite submitted as a black diamond (figure 1, left).

An uneven surface and surface-breaking black inclusions were visible with the unaided eye. Mosaic patterns of light and dark gray regions were observed under a microscope and became distinct in the Raman image (figure 1, right). Small cavities and polish lines in different directions were present on the table surface, and a granular texture was observed in a large cavity on the girdle. Raman spectroscopy identified the dark gray regions as silicon carbide. 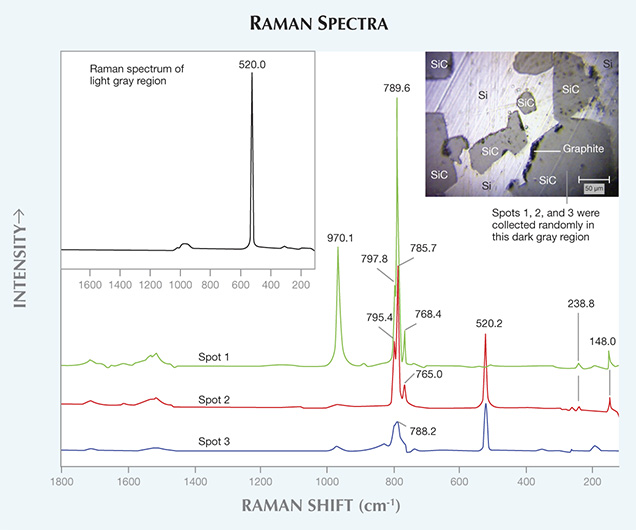 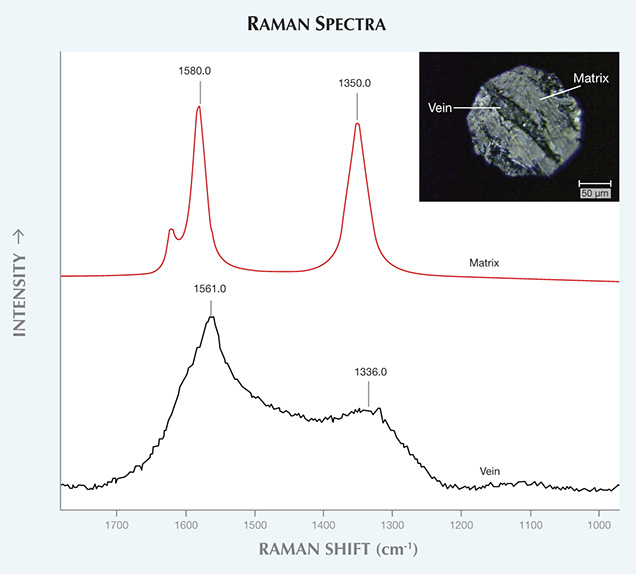 Figure 3. Micro-imaging of a graphite inclusion (inset) showed a vein in matrix. The matrix was composed of crystalline graphite, as suggested by sharp Raman bands at 1580.0 and 1350.0 cm–1. The vein was identified as amorphous graphite by broad bands at approximately 1561.0 and 1336.0 cm–1.  Photo by Kyaw Soe Moe (inset).

During SiC growth, rotation along the covalent bond generated alternate stacking layers of Si and C atoms along the c-axis with different structural sequence, which is noticeable in the (1120) plane but not along the basal plane. This rotation can occur at very low energy. Since constant growth energy is difficult to control, two or more silicon carbide polytypes can form simultaneously during the growth process; this phenomenon is called polytypism. Raman spectroscopy has been used to detect these polytypes. Although there are more than 250 known polytypes, SiC can be classified as either beta (β) or alpha (α) type. The beta type crystallizes in cubic lattice symmetry (e.g., 3C-SiC), the alpha type in hexagonal symmetry (e.g., 6H-SiC).

This sample was submitted for a Colored Diamond Identification and Origin Report, but one should always pay close attention to surface features, such as the mosaic pattern of light and dark gray regions in reflected light, together with surface-breaking black inclusions not observable in black diamond.
About the Authors

Kyaw Soe Moe and Paul Johnson are researchers at GIA's New York laboratory. Ren Lu, formerly of GIA, is currently with the Gemmological Institute of the China University of Geosciences (Wuhan).