Screening of Small Yellow Diamond Melee for Treatment and Synthetics

Diamond treatment and synthesis have undergone significant developments in the last decade. During this time, the trade has grown increasingly concerned about the mixing of treated and/or synthetic diamonds with natural melee-sized goods. Because it is often not feasible to test every small diamond in a parcel, many of these products could be traded without being tested individually by a gem lab. GIA’s New York laboratory recently tested two large groups of melee yellow diamonds submitted for screening of treatments and synthetics. The results will likely have profound implications for how melee diamonds are handled in the trade.

A parcel of 359 round diamonds between 0.02 and 0.03 ct was submitted for identification. They showed uniform appearance, intense yellow color, and good clarity. Based on spectroscopic analysis, each sample’s color was attributed to trace concentrations of isolated nitrogen. Gemological observations, infrared absorption spectroscopy, and DiamondView analysis confirmed that 344 of them were natural diamonds, 14 were grown by HPHT (high-pressure, high-temperature) synthesis, and one was an HPHT-treated natural diamond (figure 1).

To gain perspective on the surprisingly high prevalence of synthetic and treated diamonds found in this parcel, we analyzed an additional parcel containing 525 samples, with similar results. One of these was HPHT-processed, while 10 displayed the spectral, microscopic, and fluorescence characteristics typical of HPHT synthetics; we concluded that the remaining 514 were natural and untreated. Typical DiamondView charac­teristics of HPHT synthetics were observed, but most of the HPHT synthetics showed fluorescence patterns similar to those of natural diamonds (figure 2). This observation emphasizes the importance of infrared absorption spectroscopy, in addition to DiamondView imaging, when determining diamond origin. 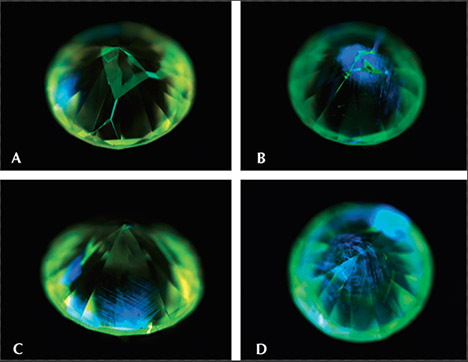 This study indicates that melee diamonds in the marketplace are being contaminated by synthetic and treated diamonds. Screening analysis by gem labs is essential to ensuring the correct identification. An efficient and reliable screening can be performed using infrared absorption spectroscopy, DiamondView fluorescence imagery, and optical microscopy. From our analysis of 883 melee samples in all, we concluded that 857 were natural diamond (97.1%), 24 were HPHT synthetic diamond (2.7%), and two were HPHT-processed natural diamonds (0.2%).

Wuyi Wang is the director of research and development, and Martha Altobelli, Caitlin Dieck, and Rachel Sheppard are researchers, at GIA’s New York laboratory.