A 0.28 ct round brilliant was submitted as synthetic moissanite to the Carlsbad lab for an identification report. At first glance, synthetic moissanite seemed like a possibility. The stone had a green-yellow color and contained numerous growth tubes visible through the table (figure 1). Yet it did not show doubling in the microscope, which is a characteristic feature of synthetic moissanite. Its infrared spectrum was a match for diamond. The infrared spectrum also showed a very unusual combination of boron and nitrogen impurities at 2804 and 1130 cm–1, respectively (figure 2). These two impurities are not known to occur together in natural diamonds in measurable quantities. This was a strong indicator of synthetic origin. A DiamondView image (figure 3) confirmed that it was synthetic, grown by the high-pressure, high-temperature (HPHT) method. It is noteworthy that after the sample was removed from the DiamondView, it showed very strong blue phosphorescence that was clearly visible in ambient room lighting and persisted for several minutes. 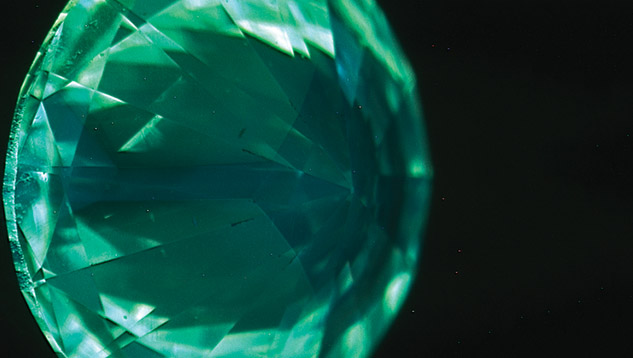 Unless special precautions are taken, diamond synthesis will incorporate nitrogen into the lattice, which leads to a yellow bodycolor. Certain chemicals can be added to prevent the incorporation of nitrogen, and this can lead to colorless diamonds. If boron is introduced to the growth of synthetic diamonds, it will become incorporated and produce a blue bodycolor. If both boron and nitrogen are allowed to incorporate into the lattice, the blue and yellow bodycolors will combine to produce a green color (J.E. Shigley et al., “Lab-grown colored diamonds from Chatham Created Gems,” Summer 2004 G&G, pp. 128–145). Since boron is an electron acceptor and nitrogen is an electron donor, an excess of boron will compensate the nitrogen and the blue color will predominate. Because nitrogen and boron have slight preferences for different growth sectors, if the concentration of both nitrogen and boron is carefully controlled, nitrogen and boron will dominate different growth sectors. The colors will blend to create a face-up greenish color (R.C. Burns et al., “Growth-sector dependence of optical features in large synthetic diamonds,” Journal of Crystal Growth, Vol. 104, No. 2, 1990, pp. 257–279).