In the past two years, many sugilite products with a dark purple color and an obvious granular texture have appeared in the Chinese market. Sugilite pendants and bangles are very popular. Their internal texture and color distribution are inconsistent with previously documented natural specimens and suggest dyed artifacts. With that in mind, we obtained a “sugilite” bangle to investigate its gemological characteristics.

Figure 1. Testing of this bangle identified it as a dyed marble imitation of purple sugilite. Photo by Shanshan Du.

The bangle weighed about 71 grams and had a dark purple color that was distributed along the mineral grain boundaries (figure 1). Spot RIs of 1.48, 1.53, 1.57, and 1.63 were obtained from different areas of the bangle. Its hydrostatic SG was about 2.65, significantly lower than that of natural sugilite. The sample fluoresced strong purple and medium red under long- and short-wave UV radiation, respectively, which indicated treatment with organic dye(s). Five main peaks were observed in the 1600–700 cm–1 region of the FTIR spectrum (figure 2). The three peaks at 1427, 881, and 710 cm–1 are typical for calcite. The remaining two peaks at 1530 and 1505 cm–1 were believed to result from an organic dye. 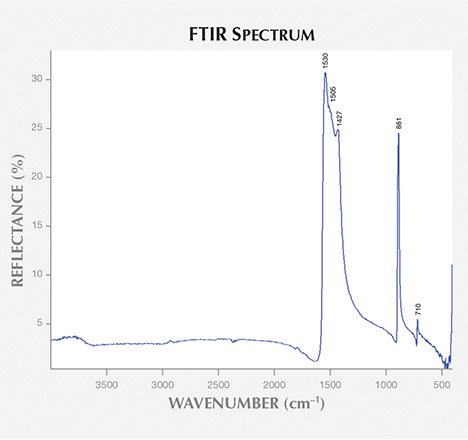 Figure 2. The FTIR spectrum of the purple bangle contained characteristic peaks at 1427, 881, and 710 cm–1 that are typical for calcite.

Although the imitation resembles sugilite, its internal texture, RI, SG, fluorescence, and FTIR spectrum identify it as marble. Since marble usually occurs as a mineral aggregate with a loose texture, it is easily dyed to imitate other precious gemstones. We can therefore expect to see a steady influx of marble imitations in the market, and rigorous testing will be needed to protect consumers.

Ke Yin and Shan-Shan Du are professors at the China University of Geosciences.