Initial observation showed a strong resemblance to red coral, but careful microscopic observation proved otherwise. The sample lacked the typical “tree ring” or striated growth structure seen in corals, though it did display a network of fine veins throughout. Viewed from above, these veins appeared subparallel and were oriented along the length of the cabochon (figure 2). The veins also displayed orange-red color concentrations against the cabochon’s whitish bodycolor (again, see figure 2), suggesting that the material was both dyed and organic.

Figure 2.  The dyed bone displayed subparallel veins oriented along the length of the cabochon; also note the orange-red color concentrations against the sample’s whitish bodycolor. Photomicrograph by Gagan Choudhary; magnified 48×.

Detailed observations of the sample from all sides revealed that the subparallel veins were confined to circular concentric planes oriented along the length of the cabochon (figure 3, top); the individual veins were further surrounded by concentric whitish rings (figure 3, bottom). These structural features ruled out the possibility of coral, but the identity had yet to be established. 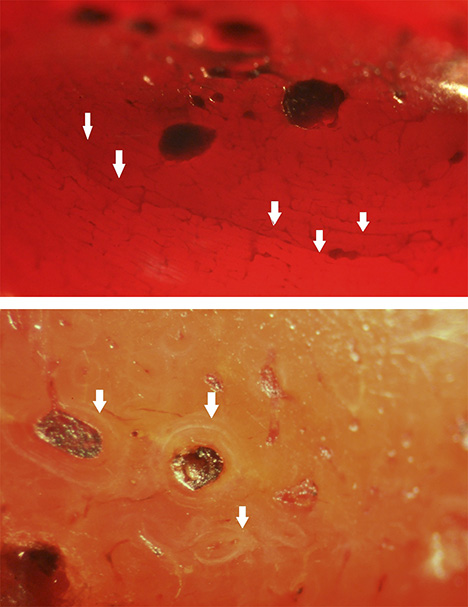 Figure 3. Subparallel veins were confined to circular concentric planes oriented along the length of the cabochon (top), while the individual veins were surrounded by concentric whitish rings (bottom). Photomicrographs by Gagan Choudhary; magnified 40× (top) and 56× (bottom).

The sample’s spot RI was approximately 1.56, without any noticeable birefringence blink, while its hydrostatic SG was 2.01. Under a UV lamp, it displayed pinkish orange patchy fluorescence (which was stronger under long-wave UV). This characteristic is typically associated with dyes. Qualitative EDXRF analysis revealed the presence of phosphorus and calcium. Chemical, gemological, and observational features indicated bone, which was further confirmed by Raman spectroscopy. Raman spectra (figure 4) obtained using a 785 nm laser in the 200–2000 cm–1 region displayed a strong peak at approximately 960 cm–1, with weaker peaks at approximately 430, 586, and 1072 cm–1. Also present were a few indistinct features in the 1200–1700 cm–1 region. The peaks at approximately 960, 586, and 430 cm–1 were attributed to PO3–4 bending and stretching, and the one at 1072 cm–1 to CO3–4 stretching. The indistinct features between 1200 and 1700 cm–1 were due to collagen—the essential component of bone tissue (C. Kontoyannis et al., “Analysis of bone composition with Raman spectroscopy,” Proceedings of the 13th Panhellenic Pharmaceutical Congress, 2012, http://nemertes.lis.upatras.gr/jspui/bitstream/10889/5187/1/PMO031.pdf). 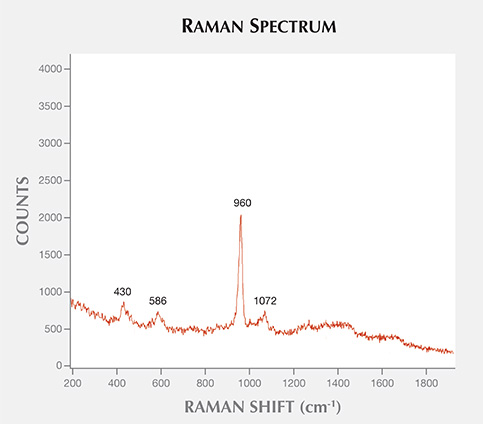 Bones have been used as jewelry since ancient times, and some specimens are dyed or stained to make them appear older (Summer 2006 Lab Notes, p. 160). Bone is used to imitate ivory, but this is the first time we have seen a bone dyed red and presented as coral, an interesting and unusual imitation. Although the market penetration of this material is unknown, we cannot rule out the possibility of it being mixed in packets of red coral, and this separation would pose a challenge for jewelers and gemologists.

Gagan Choudhary (gagan@gjepcindia.com) is the deputy director at the Gem Testing Laboratory in Jaipur, India.