Red coral, one of the most precious organic gems, has become increasingly popular in the Chinese jewelry market. With natural coral resources being depleted, ornaments of large size and high quality are becoming even more valuable. As a result, the market for treated red coral and imitation products is rapidly growing.

Composite red coral normally consists of coral fragments glued together with cement compounds. In 2010, the National Gemstone Testing Center Gem Laboratory in Beijing tested one bangle that was represented as red coral (Summer 2010 GNI, pp. 158–159). Because the client did not allow the lab to take a powder sample, further testing was restricted. There was some concern about whether the bangle had an artificial matrix, but this could not be determined without destructive tests.

Recently, the NGTC received 10 bangles and four snuff bottles (figure 1) presented as red coral. The bangles resembled the one tested in 2010. Each of the 14 pieces was covered with a very thin surface layer of red coral. The composition of the material below this coral veneer was analyzed.

Magnification revealed the boundaries between the coral fragments and the cement compounds, which tended to be recessed (figures 2 and 3). This clearly demonstrated that the veneer was composite red coral. The coral fragments had a vitreous luster and showed wavy growth patterns typical of natural coral. No growth patterns were seen in the cement compounds except for air bubbles.

Figure 2. Left: A close-up of a bangle with coral veneer. Right: The bangle’s inner surface is covered with rectangular coral slices, but gaps filled with cement compounds are still visible. Photos by Haibo Li; magnified 6.5×. 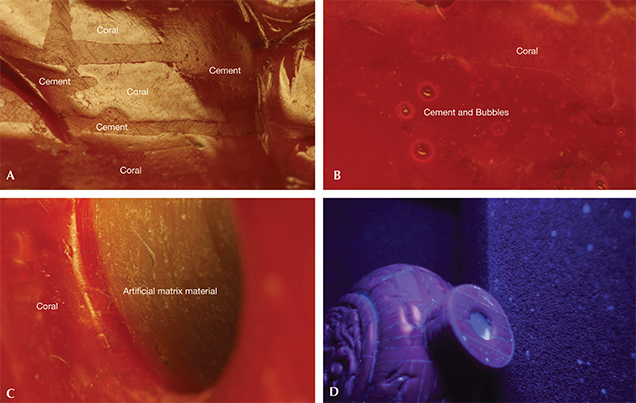 Figure 3 A: Reflected light showed the difference in luster between the cement compounds and the coral fragments; magnified 10×. B: Under transmitted light, air bubbles can be found in the cement compounds; magnified 20×. C: The boundary between the matrix and the composite coral veneer is very clear and sharp; magnified 10×. D: The fluorescence reaction of the same sample under short-wave UV. Photomicrographs by Haibo Li.

Whitish material seen inside the neck of the bottles was identified as an artificial matrix. The composite red coral veneer, which was only about 1–2 mm thick, had been glued to the surface of the whitish matrix. Under a short-wave UV lamp, strong blue-white fluorescence from the cement compounds and the matrix was visible (figure 3).

Micro-infrared spectrometry (with 4.0 cm–1 resolution and 64 scans in the 675–4000 cm–1 range) identified the cement compounds as epoxy resin (figure 4A). Two different kinds of artificial matrix material were detected: ethyl cyanoacrylate (figure 4B) and alkyd synthetic resin mixed with carbonates. The main component of the carbonates was established as calcite by subtracting the spectra (figure 4C). The calcite could have come from the manufacturing process of the composite red coral.

Figure 4. A: The IR spectrum of the cement compound in one of the bangles identified it as epoxy resin. B: The IR spectrum of the artificial matrix material in one of the snuff bottles indicated ethyl cyanoacrylate. C: The artificial matrix material in the other three snuff bottles was identified, by subtracting IR spectra, as alkyd resin mixed with carbonates.

The SG of the synthetic resin was about 1–2 g/cm3, much lower than that of red coral (2.65 g/cm3). Carbonates could have been added to the matrix to make it heavier and approximate the heft of coral. The snuff bottles all had similar size but different weights. The three that contained alkyd resin mixed with calcite, which has a relatively high SG, weighed 140–145 g. The matrix in the fourth snuff bottle was ethyl cyanoacrylate, which has a lower SG than calcite. As a result, it only weighed 121 g.

In today’s market, oversized red coral products are often constructed from an artificial matrix. After the matrix is shaped, a veneer of red coral fragments is glued to its surface. This makes it easier to manufacture larger ornaments while preserving natural coral reefs. Combining magnification and UV fluorescence observation with infrared spectrometry, we can identify composite coral assemblages quickly and effectively.