In 2009, one of the contributors had the opportunity to see small lots of greenish blue to bluish green Cr-rich kyanite in Jaipur, reportedly mined from the eastern Indian state of Odisha (formerly Orissa). Most of the cabochons and faceted gems, ranging in size up to 25 ct, were highly included. In 2013, this Cr-rich kyanite from Odisha was again available in Jaipur, this time with very few or no eye-visible inclusions (figure 1). Although a few specimens contained numerous black inclusions, most of the stones lacked these features and had a more desirable uniform greenish blue to bluish green color, making them suitable for jewelry mounting.

Standard gemological properties were measured for one cabochon and two faceted samples (0.99–6.17 ct). The cabochon was chosen for its striking black eye-visible inclusions. The three samples showed an RI of 1.714–1.730 (spot RI of 1.73 for the cabochon) with birefringence of 0.016 and a biaxial positive optic sign, and a hydrostatic SG of 3.68–3.70. Moderate to strong trichroism was observed, with pleochroic colors of greenish blue, bluish green, and pale green. Under a desk-model spectroscope, all three displayed fine lines in the red region with absorption bands in the yellow-orange and blue regions. The samples appeared strong red under the Chelsea filter and were inert to both long- and short-wave UV. These properties were consistent with those reported for kyanite. 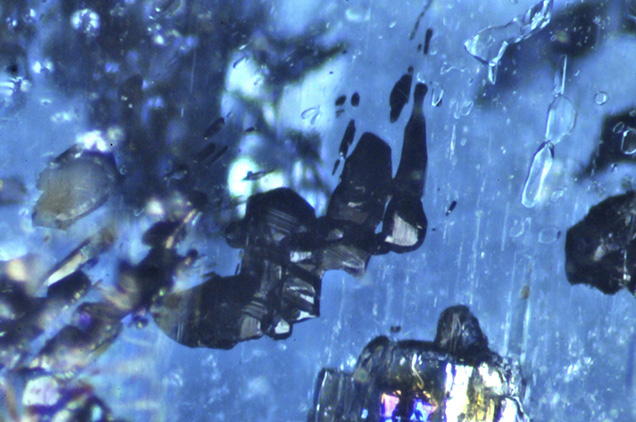 Examined under the microscope, the black inclusions in the cabochon appeared to be clusters of black grains with striated surfaces and metallic luster (figure 2); some appeared iridescent in reflected light, while others displayed frosted surfaces. Raman and SEM analysis identified these black grains as ilmenite. In addition, numerous colorless sub-rounded crystals of quartz, feldspar, and zircon were observed; the latter usually occurred in clusters, with stress cracks around them (figure 3). These samples also displayed cleavage planes in two directions and fine fissures, a characteristic usually seen in kyanites. 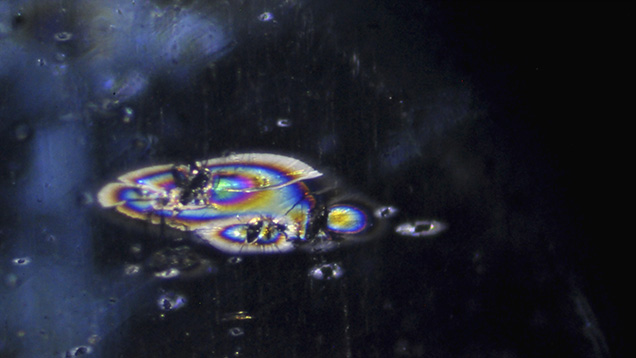 Figure 3. Clusters of zircon crystals associated with stress cracks were another common feature in these kyanites. Photomicrograph by Gagan Choudhary; magnified 80×. 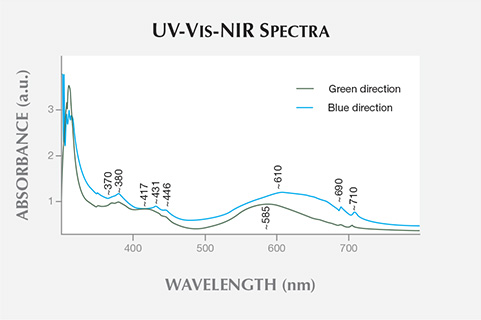 Gem-quality kyanite is already known from Nepal, Brazil, Kenya, Tanzania, and Madagascar (the latter material being Cr-rich as well). Now India can be added to this list, with attractive greenish blue to bluish green colors. The production and supply of this kyanite are still unknown.

Thierry Pradat is with Gems-Plus in Francheville, France. Gagan Choudhary is deputy director of the Gem Testing Laboratory in Jaipur, India.