Diamond inclusions can be analyzed using Raman spectroscopy, ideally when they are close to or breaking the surface. The New York lab recently had the opportunity to study a rare inclusion of xenotime protruding from the surface of a 0.55 ct Fancy Intense yellow diamond (figure 1).

The yellowish brown inclusion was located in the pavilion near the girdle; radiation stains were observed at the contact area with the host diamond (figure 2, inset). Radiation stains and the nature of the surface penetration suggested that it formed inside an etch channel as an epigenetic inclusion. Raman spectroscopy showed peaks consistent with xenotime at 1012.8, 1064.5, 1117.5, 1158.4, and 1246.6 cm–1 as seen in the figure 2 spectrum. 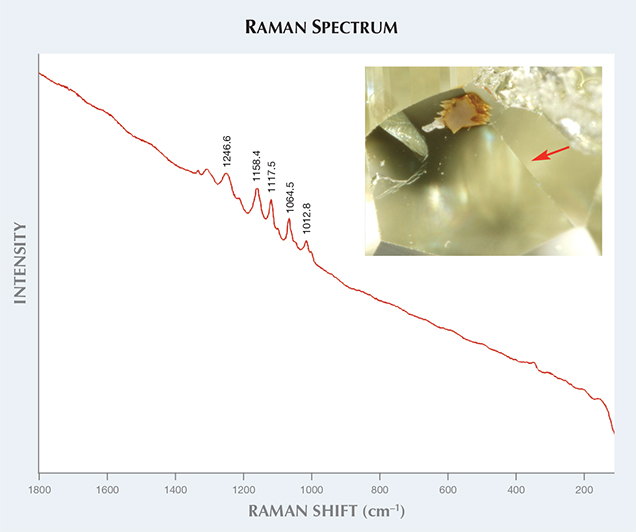 Minerals that formed outside of the diamond stability field can be found inside a diamond (see Spring 2009 Lab Notes, pp. 54–55). Xenotime (yttrium orthophosphate, YPO4) occurs mainly in granitic pegmatite and also in metamorphic rocks such as biotite gneiss (E.J. Young and P.K. Sims, Petrography and Origin of Xenotime and Monazite Concentrations, Central City District, Colorado, Geological Survey Bulletin 1032-F, 1961, pp. 273–297). Young and Sims proposed that granitic fluids such as granodiorite mobilized rare earth elements (REE) and phosphates from biotite gneiss in Colorado. Later, these ions crystallized to form unusually high concentrations of xenotime and monazite in migmatized parts of gneiss. The granitic fluids may have percolated within diamond deposits in continental crust, and REE ions could have been deposited and crystallized inside etch channels, as observed in this yellow diamond. Radiation stains associated with xenotime, which is one of the few naturally occurring yttrium minerals, may contain trace amounts of uranium and be slightly radioactive.