Recently, a transparent grayish blue oval mixed cut (figure 1) was submitted for identification at the Gem Testing Laboratory in Jaipur. The 4.49 ct stone (12.04 × 8.88 × 7.53 mm) was relatively clean to the unaided eye. Its RI of 1.582–1.590, birefringence of 0.008 with a uniaxial negative optic sign, and hydrostatic SG of 2.71 suggested a beryl, which we later confirmed with FTIR and Raman spectroscopy. The specimen’s natural origin was established by planes of dendritic platelets (usually ilmenite) oriented along the basal plane and liquid fingerprints.

The stone’s most striking feature was its unusually strong dichroism, displaying deep blue and pale bluish green colors (figure 2). The deep saturated blue resembled that of a top-quality sapphire. Such strong dichroism was reminiscent of Maxixe-type (irradiated) beryls, although their dichroic colors are usually deep blue and colorless. The deep saturated blue was seen along the e-ray, the pale bluish green along the o-ray. Such a pattern of color absorption is associated with aquamarine; the opposite effect occurs in Maxixe-type beryl, which appears colorless along the e-ray and deep blue along the o-ray (R. Webster, Gems, 5th ed., Butterworth-Heinemann, London, 1994, pp. 124–127). 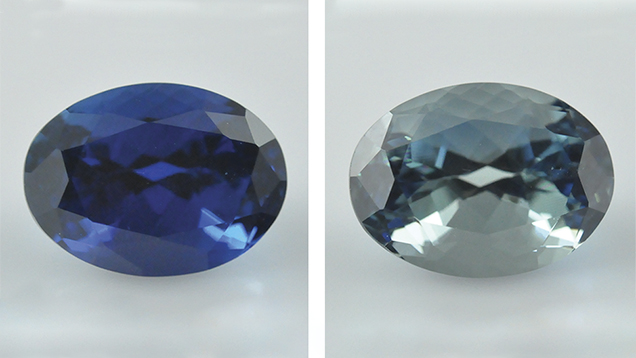 Figure 2. The dichroic aquamarine displayed unusually intense dichroism, with a deep saturated blue along the e-ray (left) and a pale bluish green along the o-ray (right). The images were taken by fixing the polarizing filter on the camera lens and rotating the polarizer 90 degrees to separate out the two directions. Photos by Gagan Choudhary.

Further analysis was performed with UV-Vis-NIR spectroscopy to confirm the cause of color and differentiate between aquamarine and Maxixe-type beryl. Polarized spectra (figure 3) revealed an absorption peak at approximately 427 nm along the o- and e-rays, a typical feature in aquamarine due to the presence of ferric iron (see I. Adamo et al., “Aquamarine, Maxixe-type beryl, and hydrothermal synthetic blue beryl: Analysis and identification,” Fall 2008 G&G, pp. 214–226); an additional peak at about 370 nm also occurred along the o-ray. No features associated with radiation-induced color centers were present between 500 and 700 nm; these are typically observed in Maxixe-type beryls. 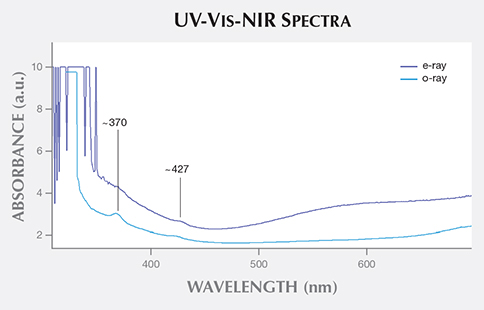 Standard gemological properties along with absorption spectra and the pleochroic color directions were sufficient to identify this stone as aquamarine. It displayed the most intense dichroism we have seen in an aquamarine. While there are deep sea-blue aquamarines (see O. Segura and E. Fritsch, “The Santa Maria variety of aquamarine: Never heated,” InColor, No. 23, 2013, pp. 34–35) as well as deep blue Maxixe-type beryls, this was the deepest blue we have observed in an aquamarine with a grayish blue hue.

Gagan Choudhary (gagan@gjepcindia.com)
is the deputy director at the Gem Testing
Laboratory in Jaipur, India.