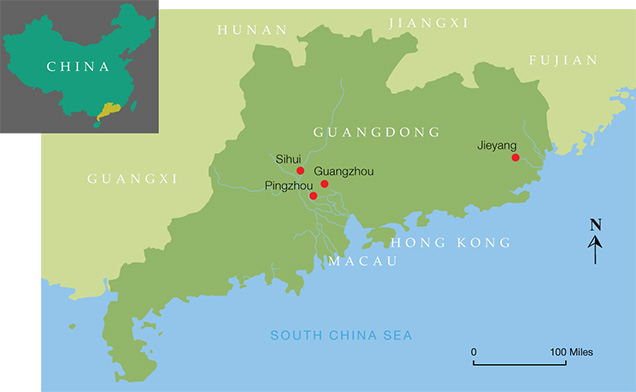 Guangzhou has been the hub of the jadeite trade since the 1660s. By about the 1880s, the industry’s division of labour was already well established in this major port city, with specific groups of people trading rough, cutting and selling the finished products.

Yangmei, a village located in the city of Jieyang, boasts the titles of “Jade Capital of China” and “Jade Capital of Asia”. Yangmei specialises in the manufacturing and trading of medium- to high-quality jadeite products, 90% of which come from here.

Sihui is world famous for jadeite manufacturing and trading. More than 200,000 people are involved in the industry in this city alone. During our visit to Sihui, we observed shops as well as carving and jewellery manufacturers. We also interviewed Tang Xiaodong, secretary-general of the Sihui Jade Trade Association.

China’s jadeite industry developed during the Qing Dynasty, under the reign of Empress Dowager Cixi (1861–1908). During that time, a jadeite carving centre was developed in Guangzhou, with many of the artisans coming from Sihui. After economic reforms were implemented in the 1980s, many artisans returned to Sihui and started jadeite carving co-operatives, passing the trade down to future generations and enabling it to flourish locally. The industry in Sihui developed rapidly after 2005 and has now reached sales of more than 100 billion yuan each year. 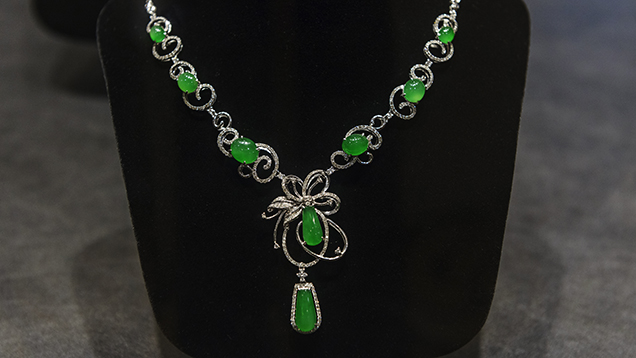 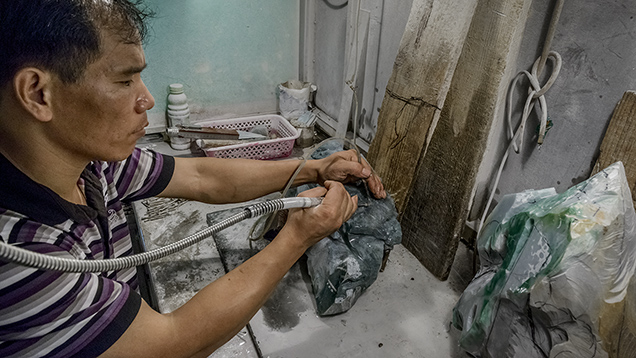 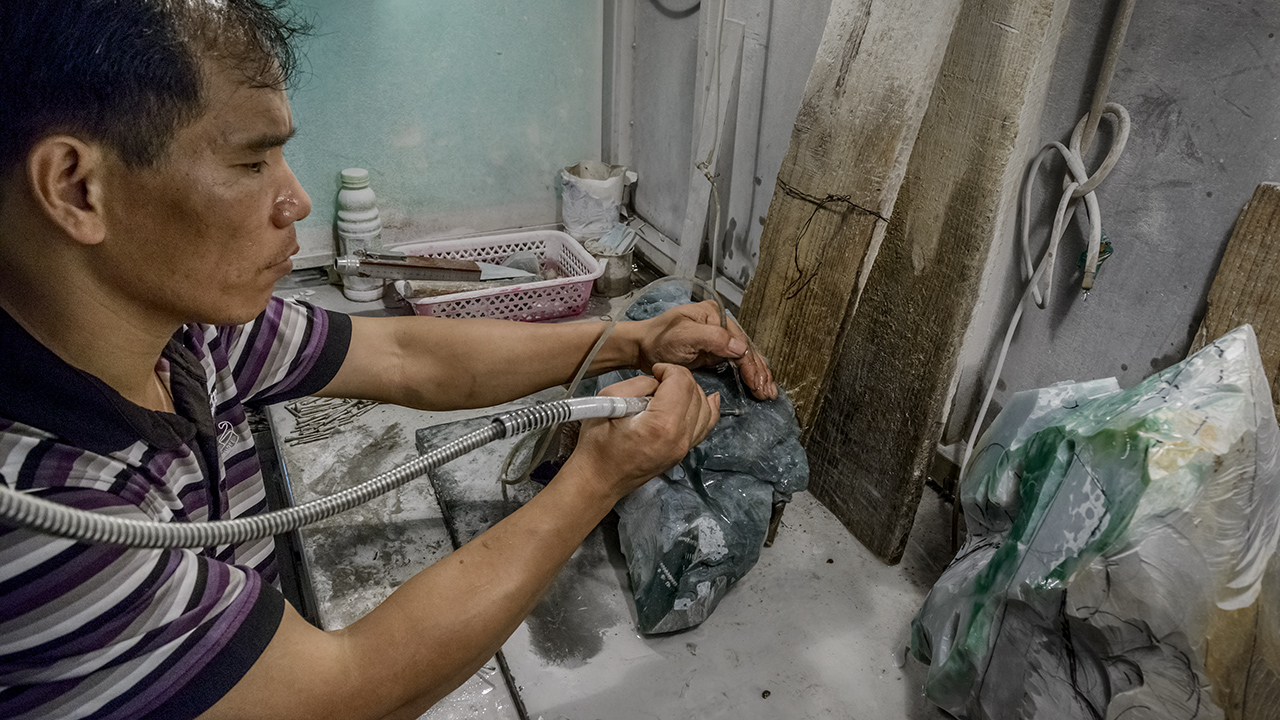 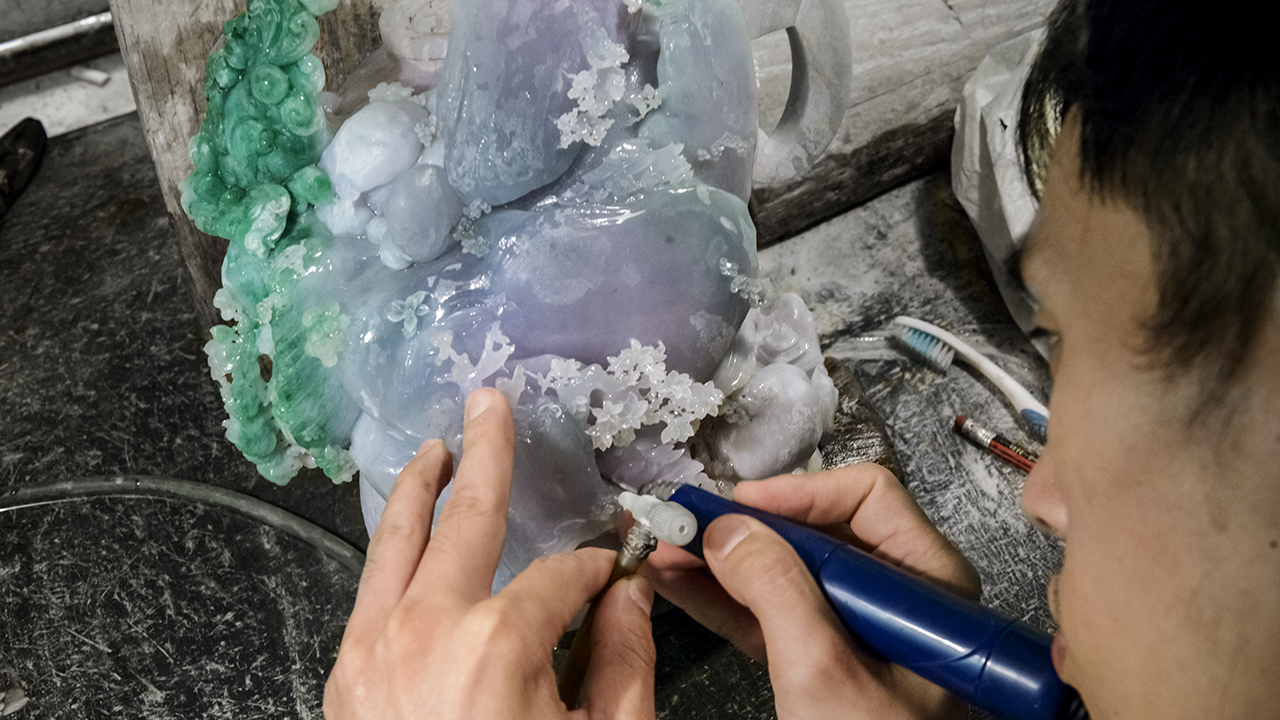 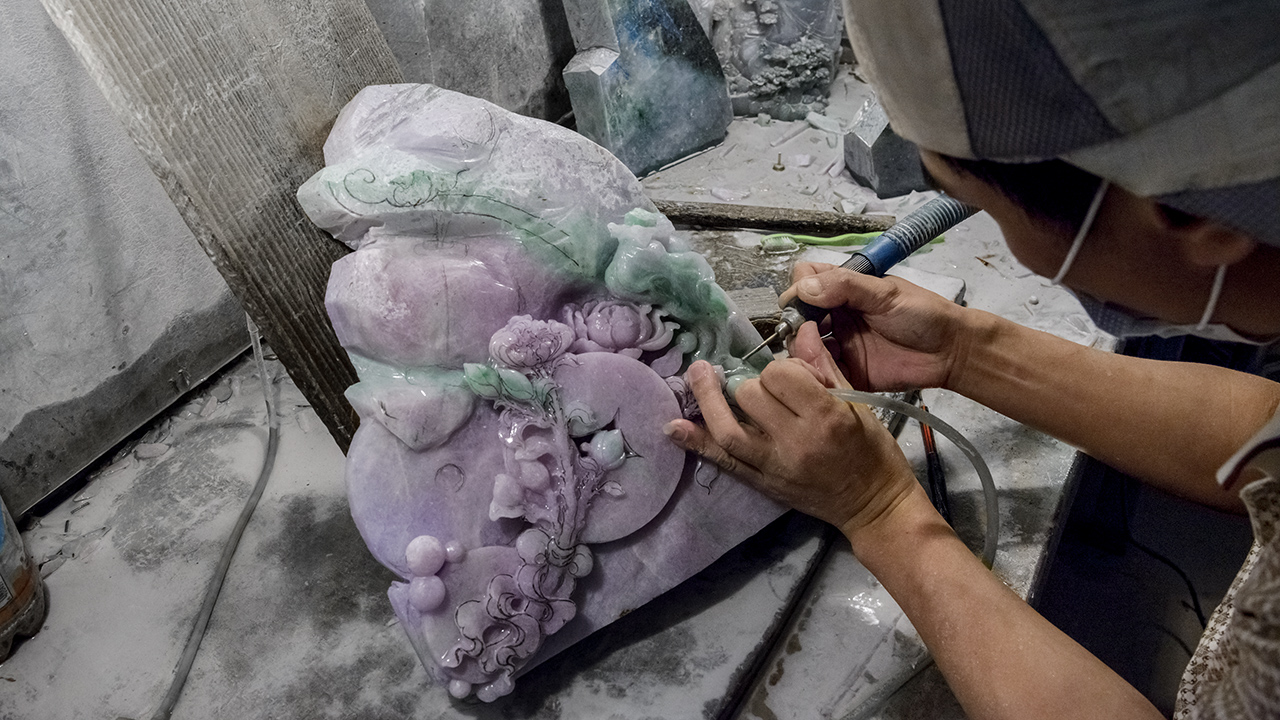 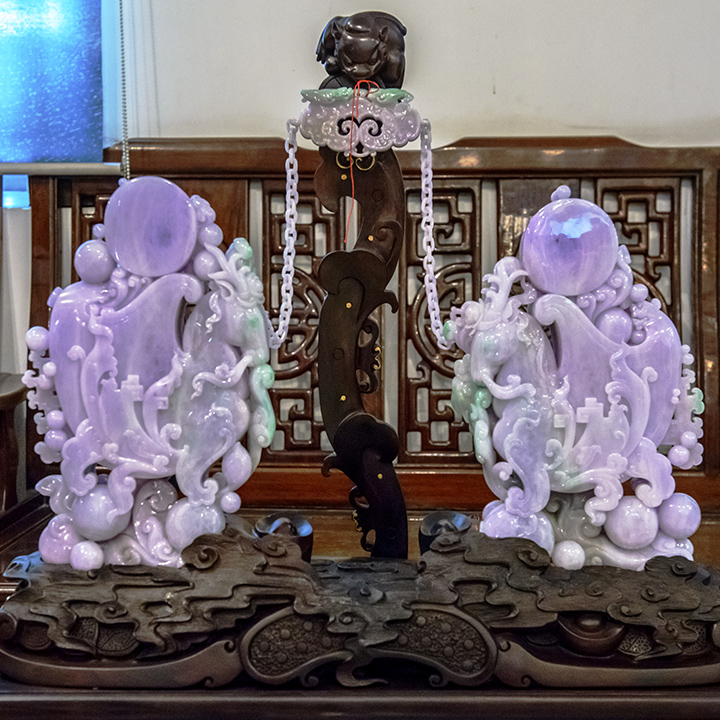 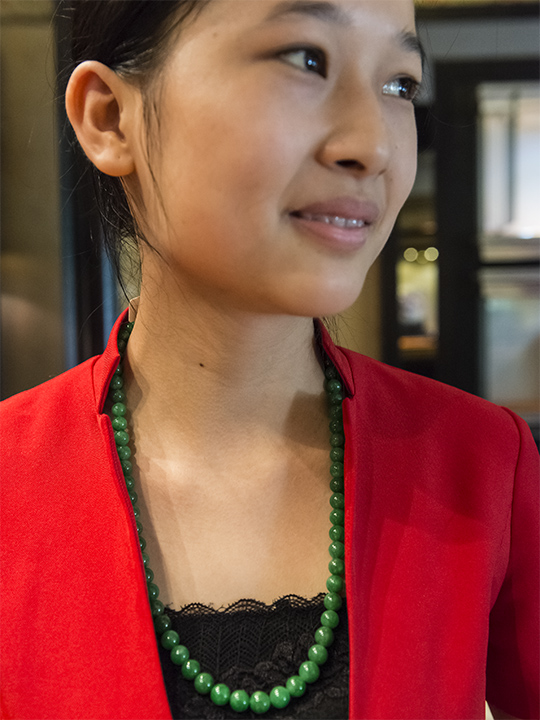 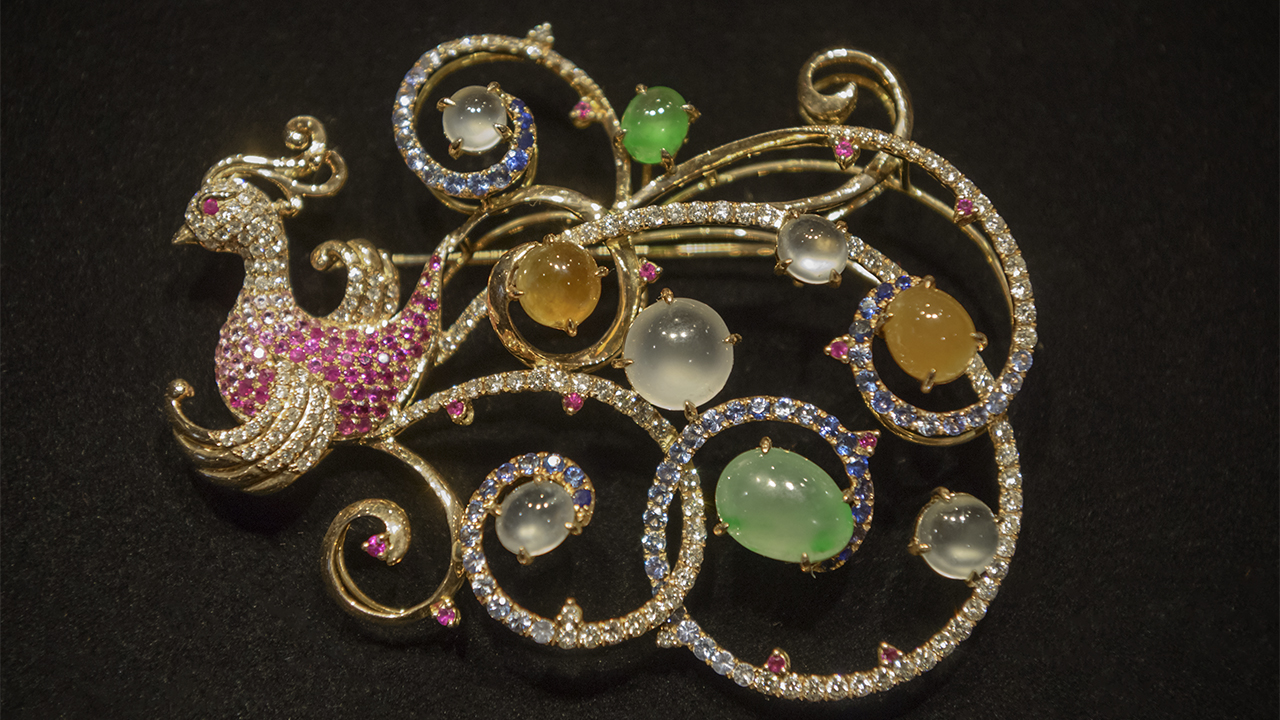 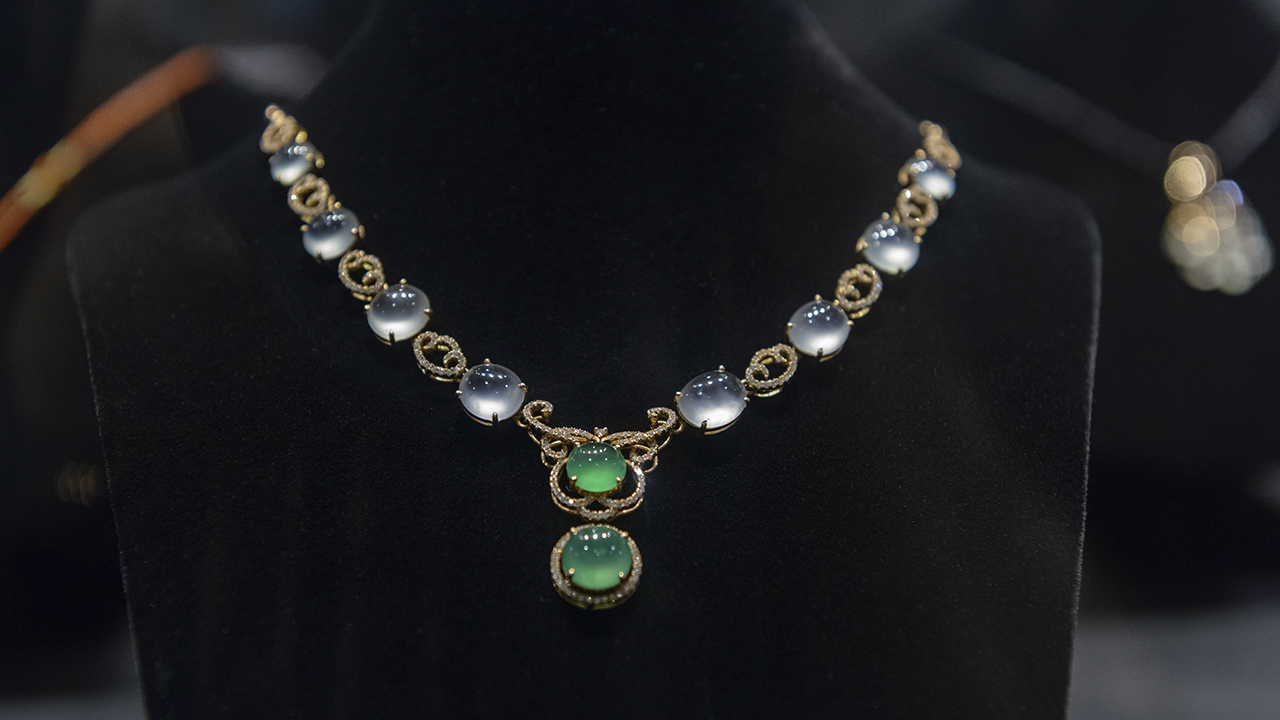 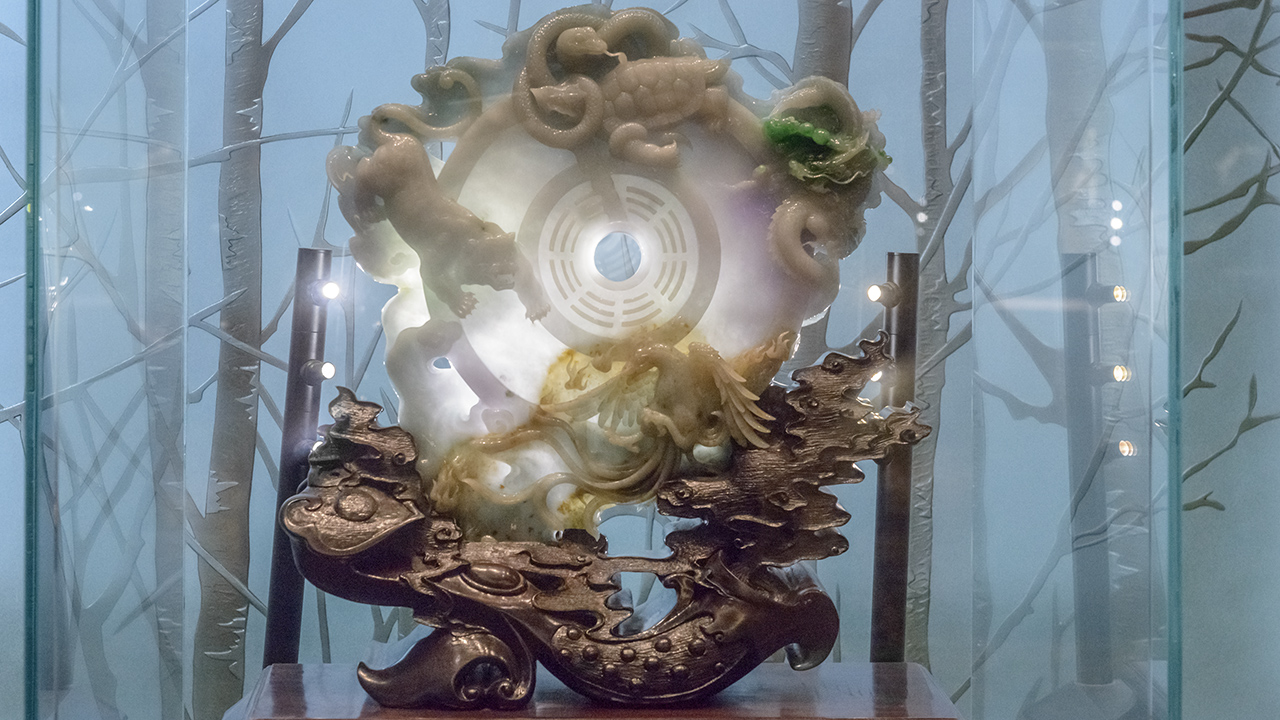 In Pingzhou, the modern jadeite industry began in the 1980s and has matured rapidly since 2000. As with Sihui, its growth accelerated after 2005, particularly in the last few years. Where there were 1,000 stores a decade ago, there are now more than 3,000. There are about 100 manufacturing businesses on Pingzhou’s Jade Street, and merchants from Jieyang and Sihui have also established a presence there. One very large jadeite trading centre in Pingzhou is called Cui Bao Yuan (“a garden full of precious jadeite”). The buildings were designed to combine trading with tourism. A merchant from Yunnan built it to resemble the ancient city of Dali. This market features a garden built specially to display the work of the great carving artisans. 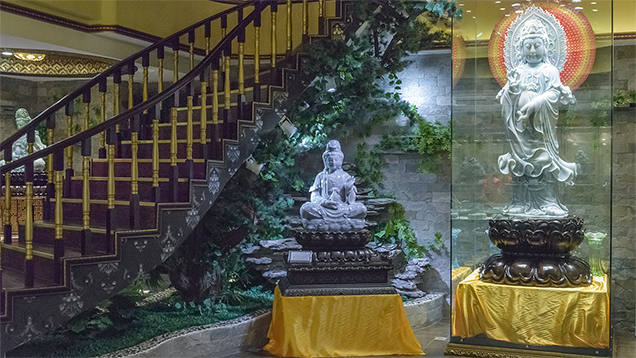 There are thousands of jadeite shops in Pingzhou. Some have beautiful interiors to match the jadeite masterpieces in their window displays. – Photo by Eric Welch, courtesy Mazu Jade Co.
The Pingzhou Gemstone & Jade Association was founded in 2001. The association protects the interests of its members and regulates the industry. The association established a Myanmar jadeite bidding fair in 2003 to provide an open public platform for Chinese and Burmese traders. 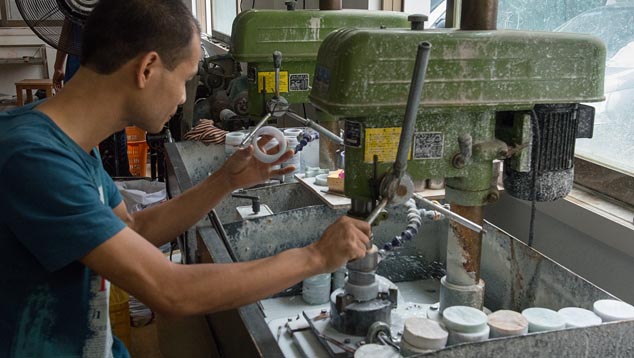 Pingzhou is an important centre for jadeite bangle bracelets. Discs are cut from flat jadeite slabs using a drill press and a circular saw bit. – Photo by Eric Welch
Jadeite Bangle Factory
Visit to a Jadeite Bangle Factory in Pingzhou
Pingzhou is well known as a producing and trading centre for jadeite bangles. During our stay, we visited a factory devoted to bangle bracelet production. In the past eight years, the factory has grown from an area of ten square metres to more than 2,000 square metres. There we witnessed the entire manufacturing process. 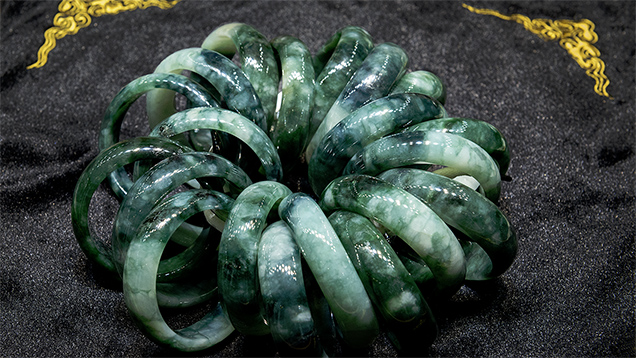 In Pingzhou, jadeite bangles can be found in a wide variety of styles, including ones with colour zoning. – Photo by Eric Welch, courtesy Mazu Jade Co.
First, flat slabs are cut from jadeite boulders. Outlines for various bracelet sizes are drawn onto the jadeite slabs. A drilling machine cuts the initial round shapes. Once the jadeite disks are formed, smaller circular saw bits are used to cut the bangles’ inside diameters. Factory workers use saw bits in various sizes to create inside dimensions for different wrist sizes.

At this point, a variety of bangle bracelet styles can be created from the initial forms, including rounded tops and engraving. A bangle might be recut thinner to remove fractures, which can diminish the value. Once the shape and style of the bangle is complete, it is polished. 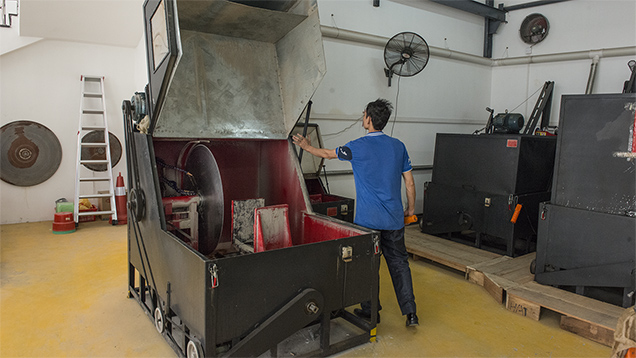 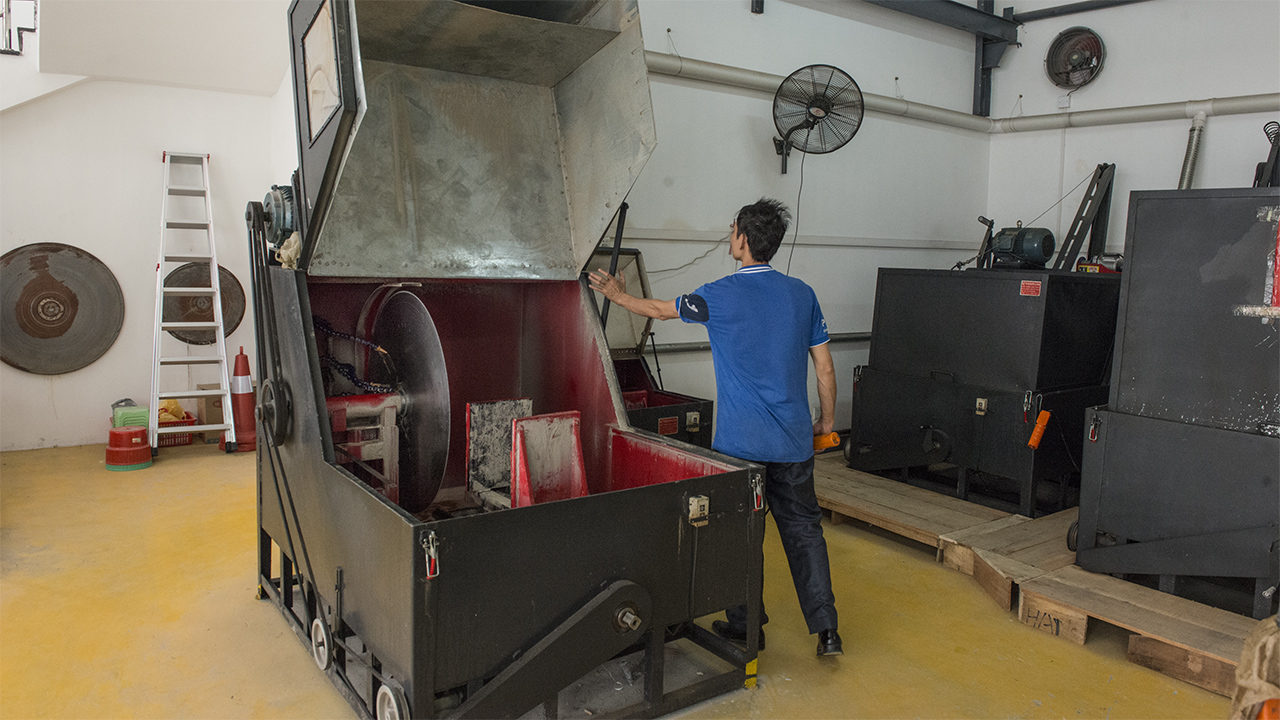 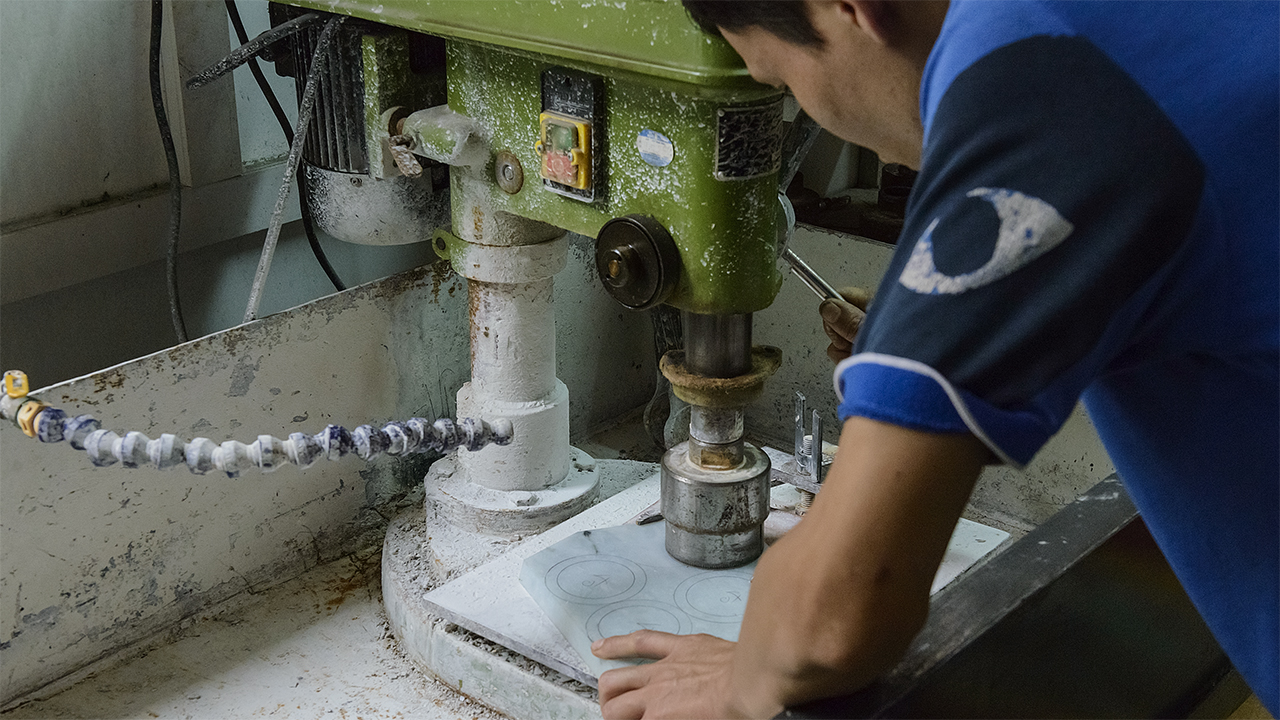 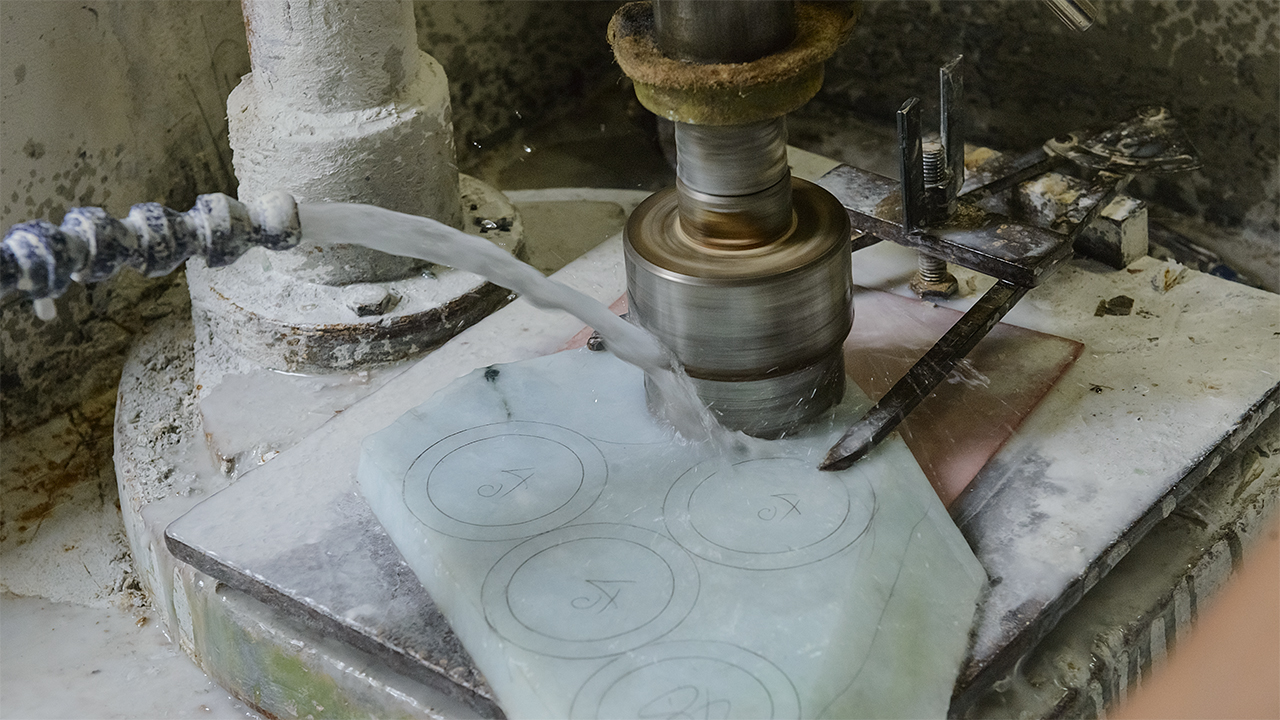 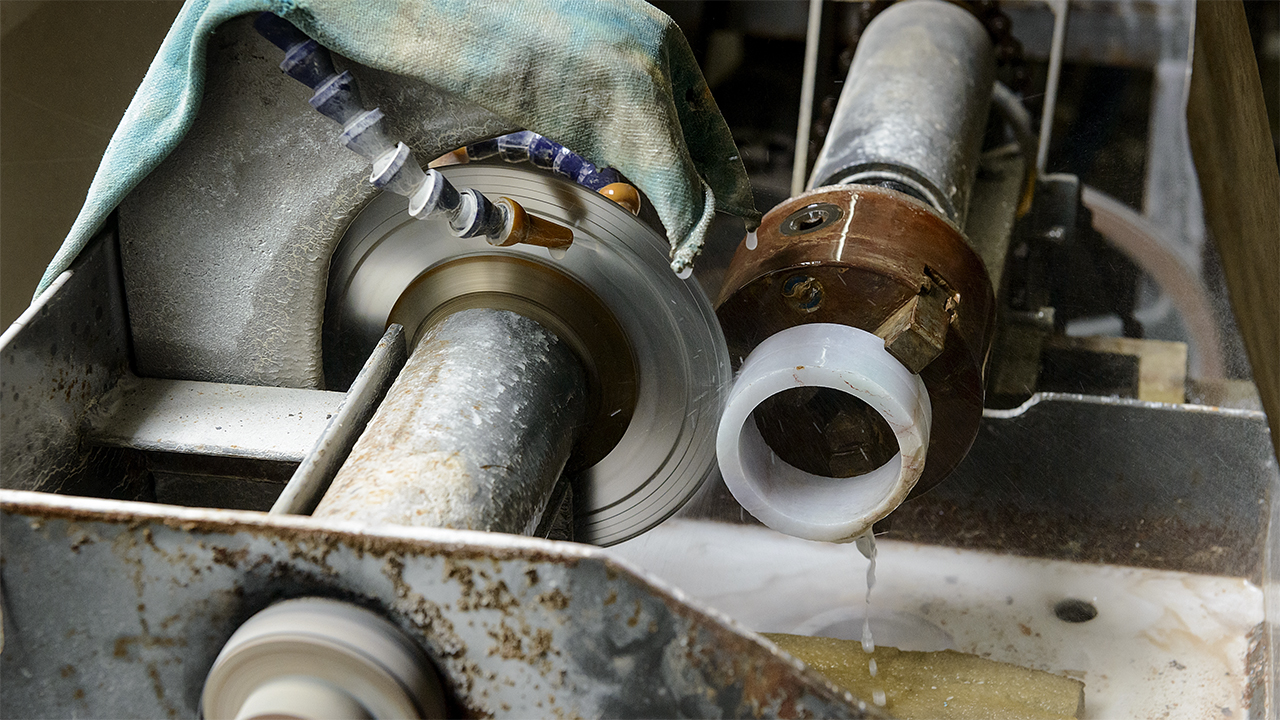 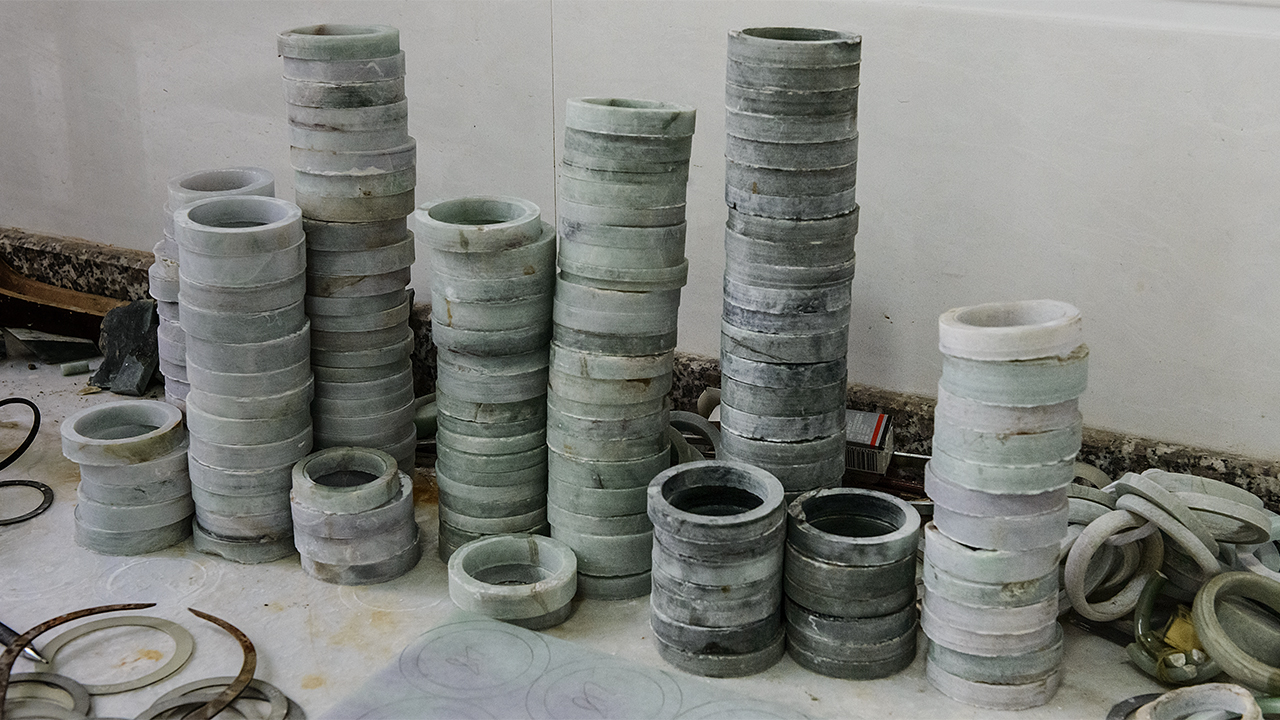 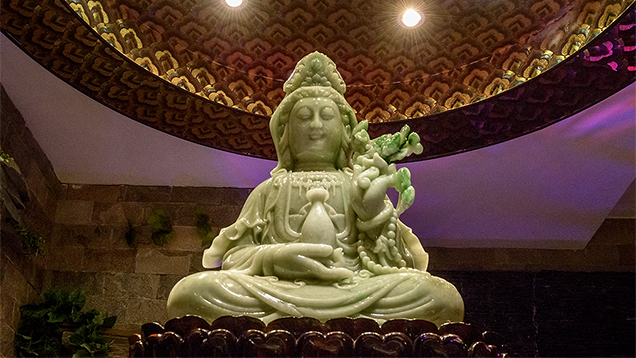 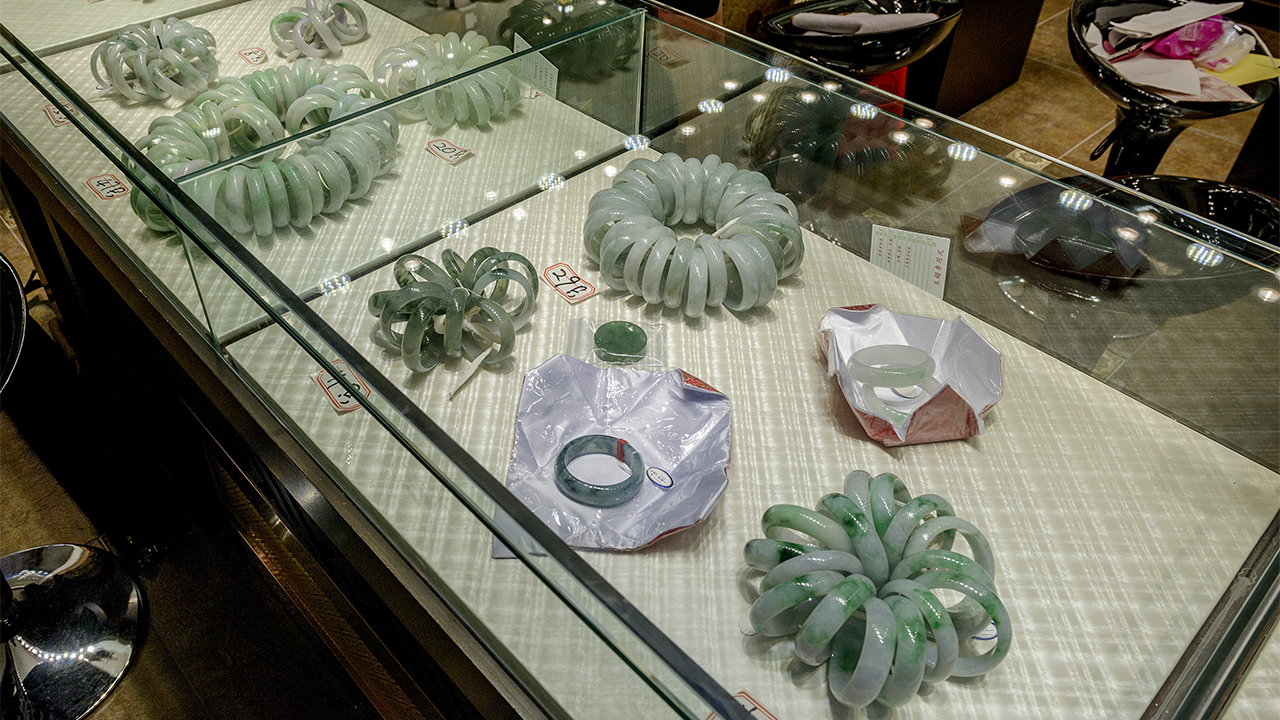 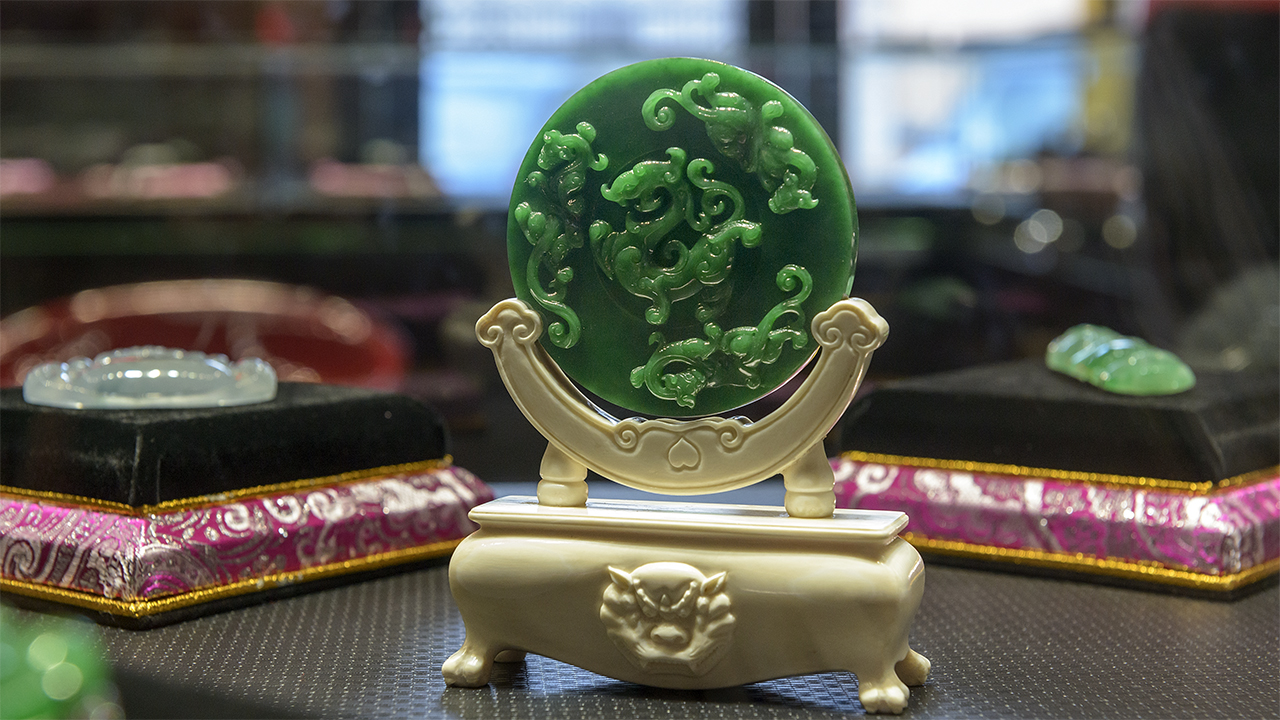 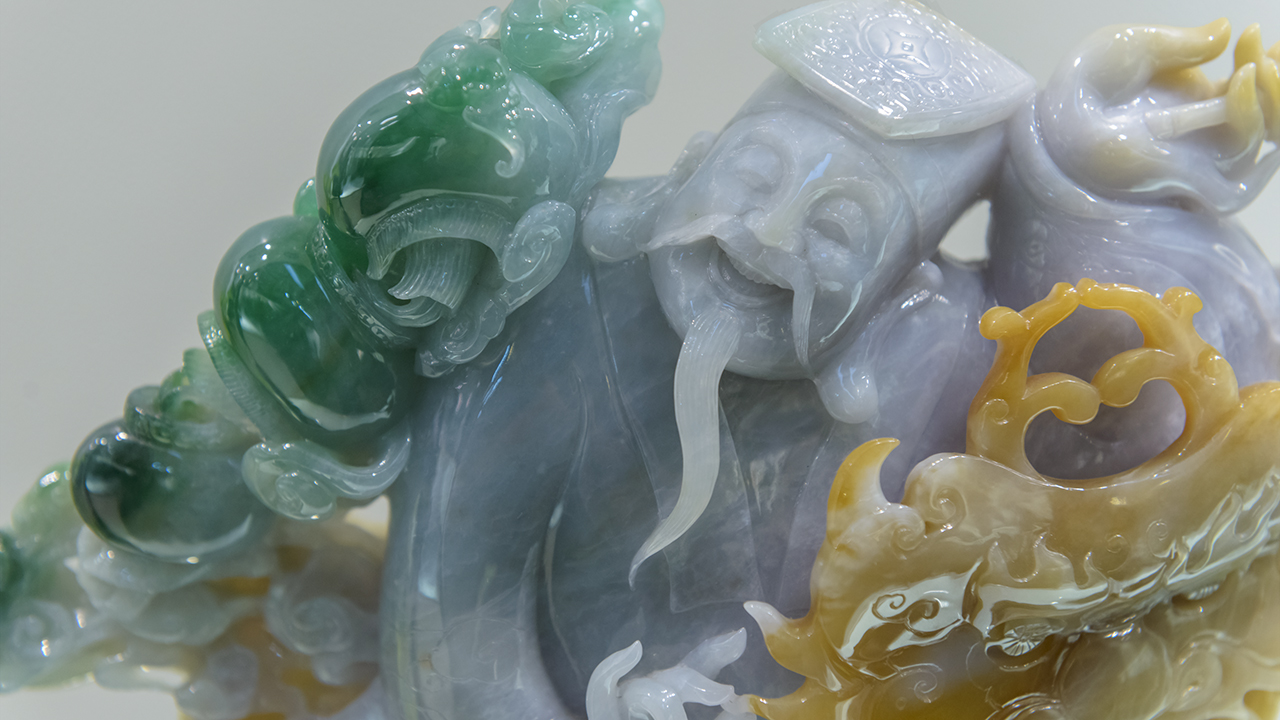 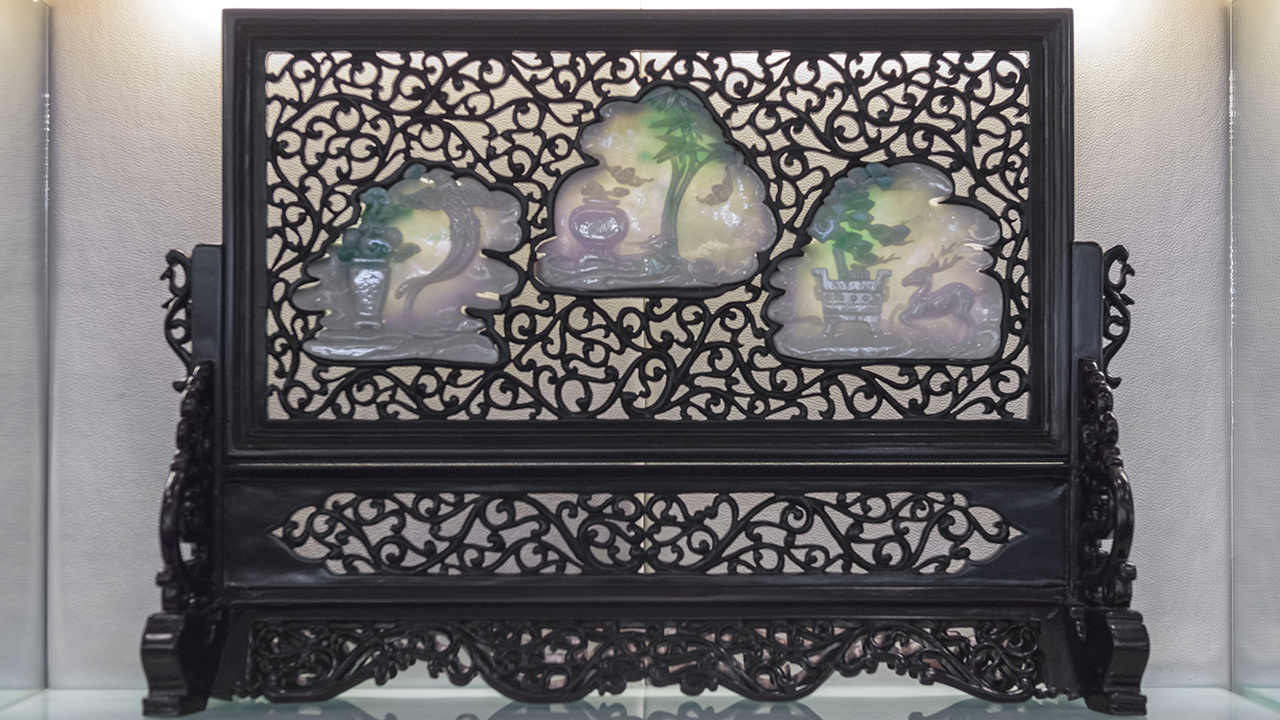 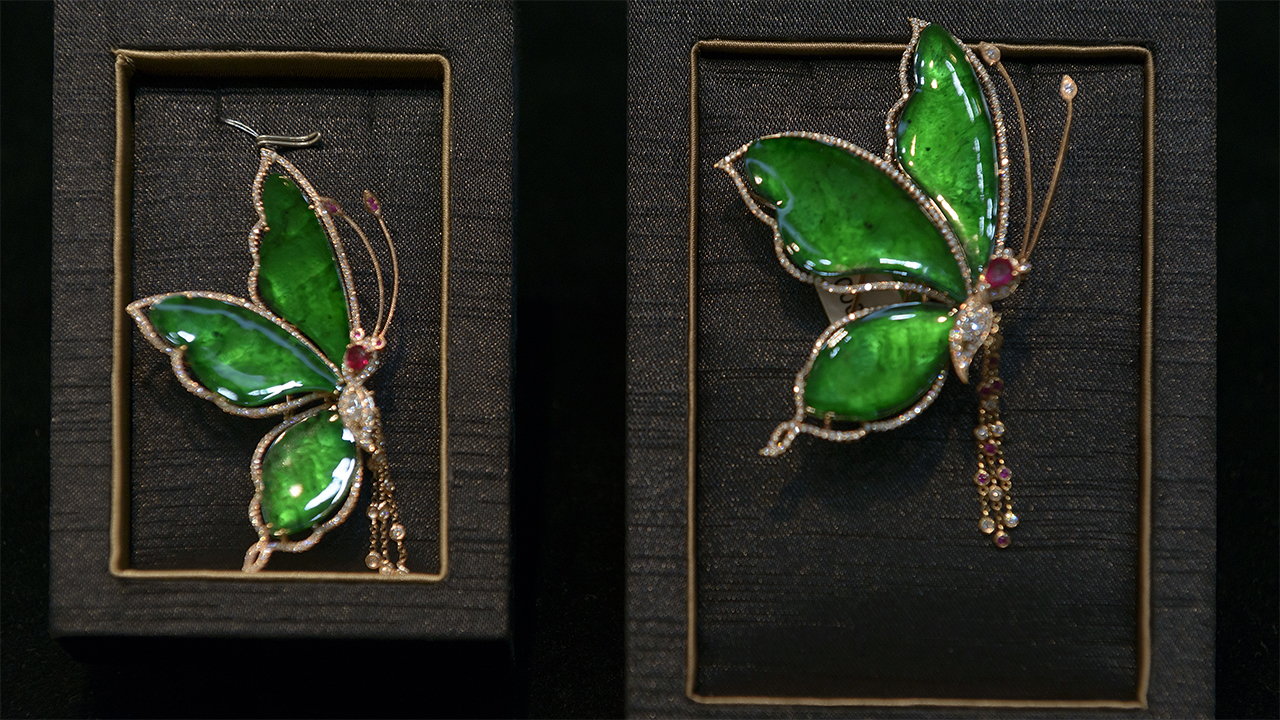 During an interview in Pingzhou, Mr Liang Huanglin, president of the Pingzhou Jewelry and Jade Association, described the association and the industry it serves. He also discussed the evaluation of jadeite products and the importance of Guangshen jade objects. “Guangshen” refers to jadeite that has not been carved but has a smooth, high-lustre surface. Pingzhou is famous for the quality of its Guangshen bangles and other objects. 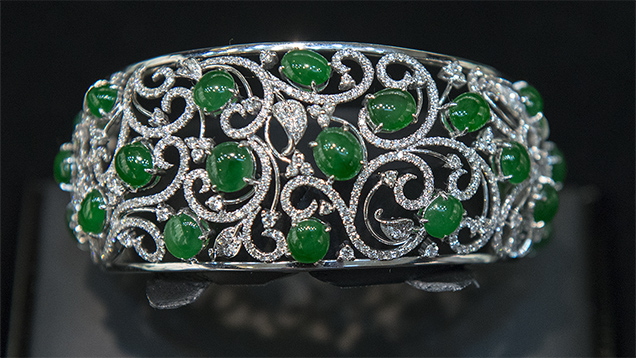 Jadeite occupies a unique gemstone market that has its own evaluation considerations. – Photo by Eric Welch, courtesy Yu Tian Shan Fang
Mr Liang began his description of the evaluation process and quality factors by talking about a jade quality characteristic that might be difficult for Westerners to understand. It’s called “Zhong”, and it refers to the completeness of metamorphism a piece of jadeite experienced. Jadeite that experienced more complete metamorphism tends to be of higher quality. “Shuitou” refers to transparency, which can range between “shuiduan” and “shuichang” (higher transparency).

Texture is another quality factor: the finer the texture, the higher the quality. Fine-textured jadeite generally takes on a better polish, which gives it higher lustre.

According to Mr Liang, the most precious jadeite colour is green, followed by purple, colourless, yellow and red. Transparency and colour can affect each other directly when it comes to jadeite value. This is especially true for colourless jadeite, which has become very popular, especially with women in their twenties and thirties. Colourless, near-transparent jadeite cost only 30,000 yuan per kilo in 1991, when Mr Huanglin first entered the industry. It reached its peak value in 2010, at 10 million yuan per kilo. Colour zoning can also greatly affect jadeite value, depending on the pattern and the colours.

On the Outside Looking In 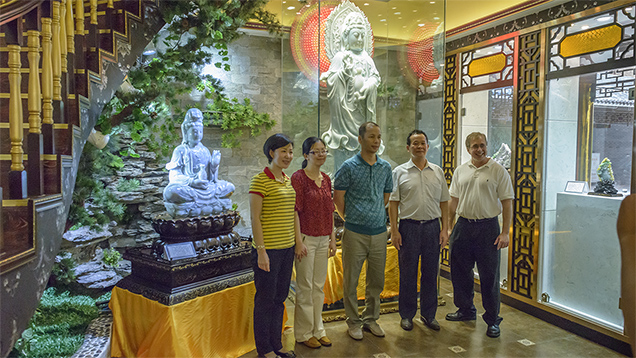 Jade experts in China’s Guangdong Province were extremely welcoming to the GIA team and generously shared their knowledge of this fascinating industry. – Photo by Eric Welch
While often hidden to the West, China’s jade market is a thriving one. It sometimes has dramatic ups and downs, but it has risen continually over the long term. It has its own language, evaluation criteria, complexities and expertise. This industry is really its own niche market, separate from the coloured gemstone market and focused on the Chinese people, who share a special cultural bond with jadeite that’s unequalled by any other gem.
About the Authors

Dr Tao Hsu is a technical editor of Gems & Gemology. Mr Andrew Lucas is manager of field gemmology for education at GIA Carlsbad.

The authors gratefully acknowledge the assistance provided by Ms Shumin Cao and Mr Qinghong Guo from Guangdong Gemstones & Precious Metals Testing Centre for introducing us to local industry leaders and providing us with ground transportation while we were visiting Sihui and Pingzhou. We would also like to thank Mazu Jade, Yutian Shanfang and Hanwuyuting for providing us with the materials needed for this article. Special thanks go to Miss Kiki Ho from Guangzhou Jewelry Chamber of Commerce, who acted as our interpreter in Guangzhou.

Enter the mysterious world of China’s jade industry and learn from its experts the intricacies of a gem market.