Beads are ubiquitous, an undeniable staple of personal adornment around the world. Their use spans not only generations, but millennia, and cuts across political, socio-economic and cultural boundaries.

One could find molded-glass “snake beads” gracing the necks of both superstar Rihanna on a magazine cover and Bontoc women working in rice fields in the Philippines. Music icon Sting has been photographed wearing a highly valued, 9-eye dZi bead of ancient treated chalcedony similar to those worn in 2500 BC.

Beads range widely in material, symbolism and value – from the pastel candy necklaces of American childhood to the rich jade strand netting more than $27 million in a 2014 Hong Kong auction.

“Beads are the gems of the people,” says jewelry appraiser and historian Sindi Schloss, GIA GG. 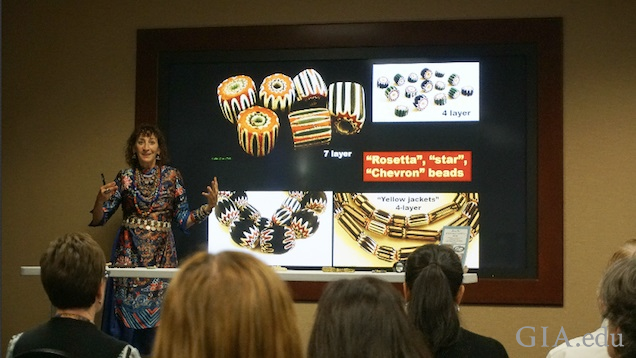 Schloss said one of the reasons she wrote “Beads: a Reference and Price Guide,” is to help bridge the knowledge gap between the “worlds” of beads and jewelry design. Photo by Jaime Kautsky/GIA

That’s why it confounds Schloss, president of Scottsdale, Arizona’s International Gemological Services and two-time president of the GIA Alumni Association’s Metro Phoenix chapter, that there is such a disconnect between the worlds of jewelry design and beads.

“The jewelers who are most comfortable with faceted gemstones are sometimes uncomfortable with beads, as the bead world is huge and can be daunting – and those in the bead world often feel the same way about gemstones,” said Schloss in a recent lecture to GIA’s San Diego Alumni Association chapter at the Institute’s Carlsbad headquarters.

“There’s an interface that’s not passing through, and it’s simply a lack of knowledge. There is some overlap, but each has its own language and learning curves to overcome, and requires some knowledge and hands-on experience,” she said.

Schloss said she decided to write her new book, “Beads: A Reference and Price Guide,” for many reasons, including to help jewelry designers who called her, unsure and uncomfortable about how to proceed with a client’s request for custom bead jewelry.

“The study of beads is the study of human migration, commerce and trade, identity and cultural identification, spirituality and connection to ancestors, communication, expression and art form,” she said, noting that researchers have determined beads to be older than rock art – and the world’s oldest form of jewelry.

Schloss indicated that though one technical definition of a bead is “an object capable of being suspended and worn,” she prefers definitions that include a nod to the objects’ abilities to trace the evolution of humanity, and serve as a language of connection.

She shared a quote from cultural anthropologist Dr. J. Mark Kenoyer, a professor at the University of Wisconsin-Madison.

“Turns out that beads,” he wrote, “are, in fact, one of the most important forms of information on ancient trade and exchange networks, ancient technological developments and ancient beliefs and rituals.” 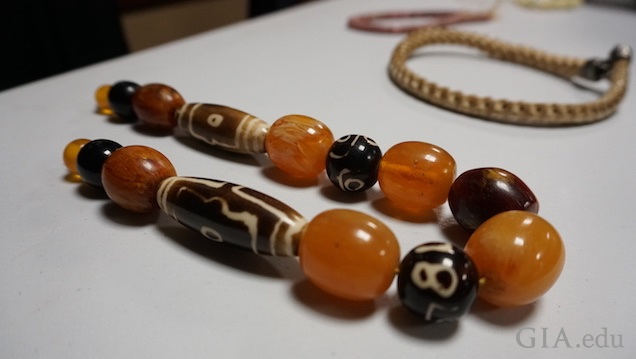 The strand of pink, molded-glass snake vertebrae beads and natural snake vertebrae choker (background), and the string of imitation amber and imitation dZi beads (foreground), are styles that have found popularity in multiple cultures and eras throughout time. Photo by Jaime Kautsky/GIA

The many functions of a bead

Beads hold sacred, spiritual meaning within many religious traditions and belief systems, Schloss said. Some count beads as part of praying, like the rosary. Charms such as amulets and talismans – with amulets believed to repel evil, and talismans to attract good – have long held special significance worldwide. She discussed how shamanic necklaces, often made of organic materials, are used to identify the spiritual leaders.

“In regions of Indonesia, they believe that there is a protective spirit in the bead,” she said, sharing photos from a trip to Borneo, where antique blue glass beads were believed to protect people. The wife of a tribal chief showed her how their village’s rice was stored in ancient glazed ceramic vases, with a bead buried inside to protect the supply.

She said beads have been used as social markers in many cultures, including: ethnic identity and tribal associations, such as Kenya’s Maasai and Samburu people; the headhunting Naga tribe of Burma and India; or an individual’s identity, gender, age or marital status.

Beads have also been used throughout history as currency and barter. Schloss noted that they’ve been called “the greatest trade item of all time,” having been traded at times for gold, and countless other items of convenience and survival.

“Archaeologists originally thought that early populations did not know of each other,” she said, “but they found beads in places they hadn’t expected, suggesting otherwise.”

Schloss discussed a late-1990s excavation of a 1684 shipwreck excavation off the coast of Texas that yielded tens of thousands of tiny blue, black and white glass beads that French explorers planned to use in trading with Native Americans. 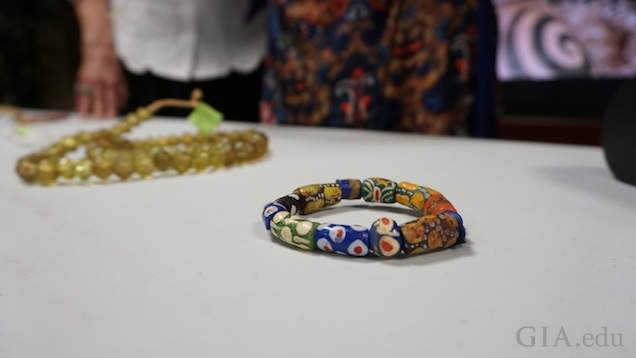 A necklace of Bohemian, molded-glass uranium beads (background) and contemporary, hand-painted powdered-glass beads (foreground) from West Africa, were among the beaded treasures that Schloss displayed for attendees after the lecture. Photo by Jaime Kautsky/GIA

From pre-history into the future

The earliest appearance of beads is thought to be 100,000-130,000 years ago, Schloss said. Neanderthals were the first to make and use beads, or ornaments of any kind, long before even rock art. As early humans became self-realized and demonstrated complex, symbolic thought – developments that led to these early humans being called ‘modern man’ – they began to use objects for symbols and not survival alone, she said.

“They were not just random, they were symbolic,” Schloss said. “Beads were indicative of symbolic thought.”

The Paleolithic era saw the first attempts to harden beads, including shell and bone, with fire. Thus, Schloss said, the first experimentation with heat treatment on beads goes back 20,000 years. The era also introduced a technique called heishi to grind and fashion them.

As Schloss walked attendees through the major milestones in human and bead history – from the prehistoric times through the ages of European exploration – the rise of stone and glass beads became pervasive. 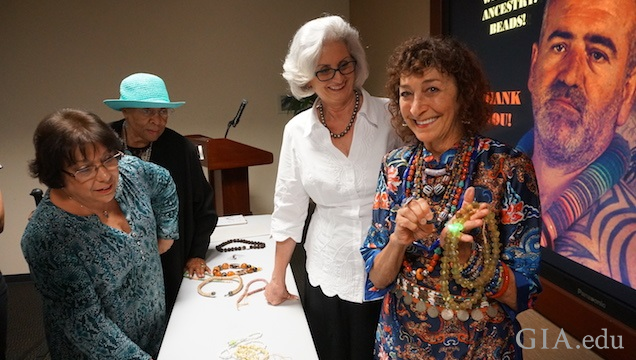 Schloss reviewed some characteristics such as color, age and common techniques that can help audience members identify beads and thus, better understand how to value them – whether shopping at trade shows, working for clients or browsing an estate sale.

“When you have more knowledge, it’s so much more fun to work with them,” she said. “And, you can give your customers more information.”

Schloss said that some beads – like that auctioned strand of jade in Hong Kong that sold for $27 million ($1 million per bead), or Sting’s $1 million dZi bead – are of significant, even shocking, value.

She is pleased to see beads bringing in healthy valuations and hopes more designers will embrace the artistic and creative possibilities found in them. She was happy to see “more use of interesting and storied, ancient and antique beads in high-end designer jewelry” at the 2018 Tucson gem and mineral shows.

“[Bead jewelry] was the first kind of jewelry that existed, and it’s still important,” she said. “They were present in prehistory, continue in the present day, and likely into tomorrow.”

The Creation and Business of Beads

Let a GIA field team take you into one of the largest bead manufacturers in the world to see the creation of all styles of beads from all types of gemstones.
Read More