The Spring 2016 issue of Gems & Gemology explains the relevance of photoluminescence to the diamond trade and reports on Australian chrysoberyl, emerging production of Italian serpentine and Tajik variscite, the treatment processes used to create “pistachio” cultured pearls, and the recent Tucson gem shows.

The lead article in this issue, by GIA’s Christopher M. Breeding and Sally Eaton-Magaña, reviews the physics and methodology of photoluminescence. This analytical technique is increasingly important in the separation of treated and synthetic diamonds from natural material, and the authors explain how it helps ensure proper disclosure of growth processes and treatments within the trade. 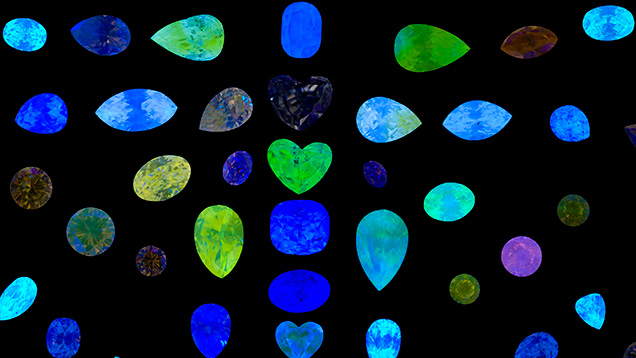 Diamonds can show a wide range of hues and fluorescence colors. GIA regularly uses photoluminescence spectroscopy to confirm the natural origin of such diamonds. Photoluminescence is a sensitive technique that allows one to characterize the atomic-level lattice defects that act as a fingerprint of the growth and possible treatment history of diamonds; this method is based on similar principles as the observed fluorescence. Photos of a portion of the Aurora Butterfly of Peace by Robert Weldon. 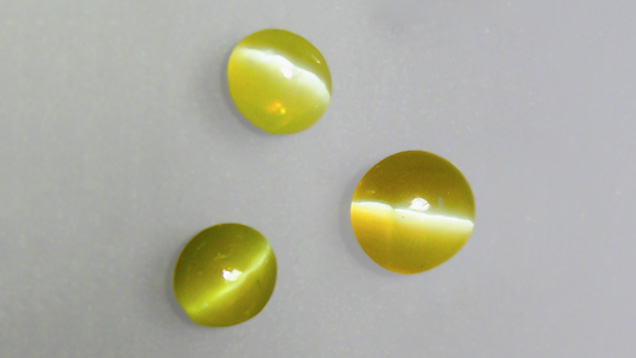 While some of the chrysoberyl research samples from the sapphire placer deposits in the New England area were faceted, others were cut as cabochons, showing chatoyancy. The cat’s-eye cabochons range from 1.34 ct (6.5 × 5.9 mm) to 0.64 ct (5.1 × 4.7 mm). Photo by K. Schmetzer.

A team of researchers, led by Ilaria Adamo of the Italian Gemological Institute in Milan, examines serpentine obtained from Pizzo Tremogge  a source located in the Central Alps of Italy. Spectroscopy and chemical analysis confirm the main phases of the serpentine group. In particular, the presence of antigorite indicates metamorphism at high temperatures, providing insight into the geological and petrological history of the Val Malenco region.

Chunhui Zhou and his GIA colleagues perform a number of experiments on cultured pearls from P. margaritifera treated by Ballerina Pearl Co. to mimic the pistachio hue that naturally occurs in some specimens. The authors look for indicators to separate naturally colored from treated material and eliminate bleaching as a possible treatment process. 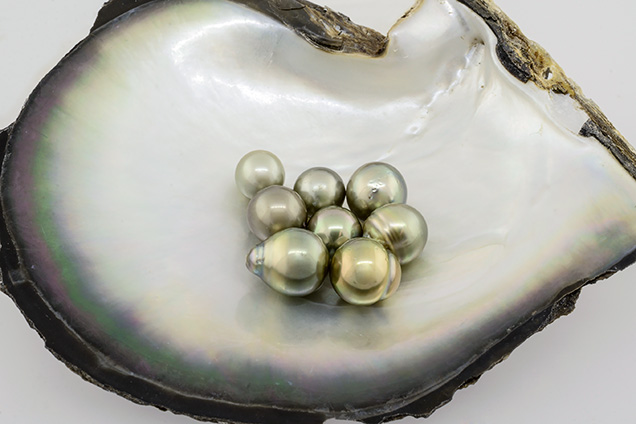 Researchers led by Andrey Litvinenko (Russian State Geological Prospecting University, Moscow) investigate the production of cabochon-grade variscite from a relatively unknown deposit in Tajikistan. While further study is required, initial results reveal the presence of relatively high levels of arsenic and sulfur that may link this source to an inactive antimony deposit located nearby.

Lab Notes in the Spring issue include a report on the largest blue HPHT synthetic diamond examined at a GIA lab, an unusual emerald/emerald doublet submitted to the Tokyo lab, and the first mounted CVD synthetic melee diamond identified by GIA.

Micro-World continues to reveal the inner mysteries of gemstones through photomicrography. The section features pieces on svanbergite inclusions in dolomite from British Columbia, orange platelets creating iridescence in scapolite, and visible phase changes in a Sri Lankan sapphire. 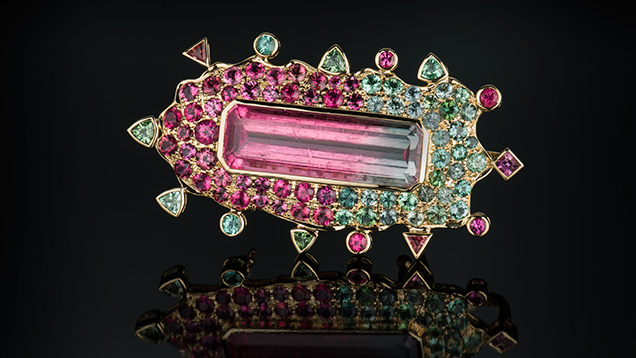 This 31.34 ct bicolor tourmalines pin, which contains gemstones exclusively from the Stewart Lithia mine in San Diego County, has an emotional connotation for the artist. Photo by Robert Weldon/GIA; courtesy of Paula Crevoshay.

Also in this issue are the winners of the Dr. Edward J. Gübelin Most Valuable Article Award, along with the 2016 Gems & Gemology Challenge quiz. Response cards and online entries for the Challenge must be submitted by Friday, August 5, 2016.

G&G Brief presents an overview of the content of the Fall 2015 issue of Gems & Gemology.