Stars are one of the most fascinating phenomena in the gem world, and the summer issue of Gems & Gemology (G&G) takes an extensive look at the cause of dual-color double stars in both corundum and quartz. The issue also offers gemologists a how-to on taking photomicrographs of gemstone inclusions and a view of the rarely visited ruby source at Snezhnoe, Tajikistan. In addition, G&G debuts a new section called Micro-World, which offers a deep look inside gemstones to examine inclusions and the gems’ “inner-space.”

Dual-Color Double Stars in Ruby, Sapphire, and Quartz: Cause and Historical Account

Dual-color double star ruby and sapphire are best known from a line of synthetics mainly produced by the Linde Air Products Co. for the fashion jewelry market for nearly 30 years. Such stones are also occasionally found in nature in different sources around the world. The dual color refers to the double stars, one of them white and the other matching the host stone’s body color. 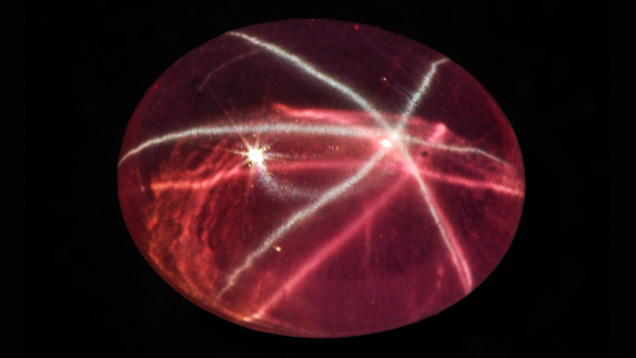 This pink synthetic sapphire showing a white six-rayed star and a pink star was purchased by one of the authors in Bangkok in 2010. The cabochon measures 14.4 × 11.2 mm and weighs 12.37 ct. Photo courtesy of M.P. Steinbach.

In addition to the synthetics by Linde, the authors (Karl Schmetzer, Martin Steinbach, H. Albert Gilg and Andrea Blake) examined natural purple-pink sapphires from Myanmar, recently manufactured synthetics from various sources, and natural quartz from India and Brazil that also displayed the phenomena.

In quartz, needle-like rutile inclusions also are responsible for both of these stars.

Photomicrography – photographing tiny gemstone inclusions with the use of a microscope – serves both research and artistic purposes.

Until recently, the practitioners of this art used film instead of digital methods because of the superior color rendition and resolution that film once offered. But digital photomicrography has advanced to the point where it is in many ways superior to film, with the added benefit that the photographer can instantly see the results and easily make adjustments to the image. 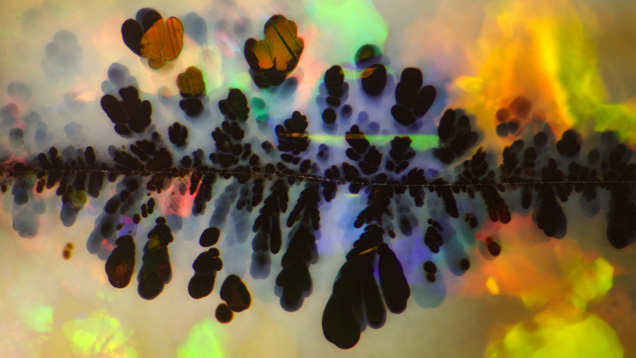 The black manganese oxide “plumes” in this Australian opal serve as a good example of art and science merging in gemology. Photomicrograph by Nathan Renfro, field of view 5.85 mm. Note: Field of view is horizontal throughout this paper unless otherwise specified.

This article by GIA researcher Nathan Renfro details basic aspects of photomicrography, including selecting the proper gemological microscope and digital camera. It is important to make sure the camera has remote control capabilities, vibration control and the ability to take very high-resolution images.

The author leads the reader through the steps of mounting the camera to the microscope, cleaning the gemstone and setting up the proper lighting. Darkfield illumination, generally the norm for gemological examination, is not always best for photomicrography because of the strong contrast between inclusions and background. Dust particles and scratches become very conspicuous. As a result, photographers should be able to employ a variety of lighting techniques, such as brightfield, diffused, fiber-optic, polarized, ultraviolet and the lesser-known differential interference contrast system (sometimes in combination).

As in any photographic pursuit, capturing the image is only the first step. Processing to render the image as close as the actual subject as possible, beyond standard Photoshop, is the second step. This requires processing software that can improve focus – extending depth-of-field is a must because of the high magnification and extremely tight focal lengths. High dynamic range (HDR) software is also critical to combat overly bright or dark areas and to enhance detail. Some cameras, including phones, have HDR capability built in. Finally, it helps to include a scale bar that indicates the magnification in use and the size of the view field to give context to the final image.

Ruby is one of the world’s most-desired gemstones. In this article a team of mineralogists and educators from Russia, Germany and Tajikistan report on a little-known deposit in Snezhnoe, Tajikistan, located very close to that country’s border with western China. 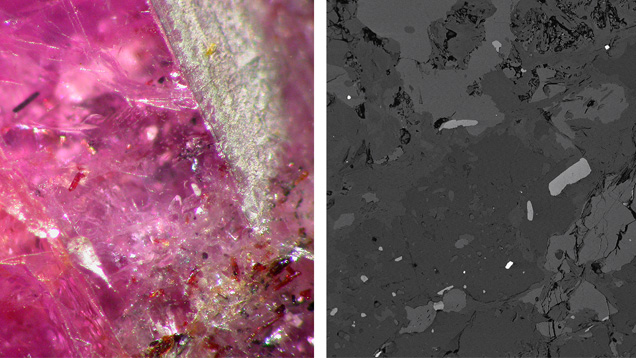 This deposit was discovered in 1980, when the country was still part the Soviet Union. Soviet authorities estimated reserves of “hundreds of thousands of carats of gem corundum,” but kept actual production figures secret while mining between then and 1990. Mining resumed in the past decade, though the state-run enterprise still does not disclose production amounts.

The Snezhnoe ruby deposit lies about 20 to 25 feet below the surface between layers of marble. The authors analyzed several dozen ruby-bearing rocks mined earlier and found the gems’ color ranged from pink sapphire, purple-red to bright red, with chromium levels similar to the well-known Mogok rubies. The researchers (Elena Sorokina and coauthors) found that Snezhnoe material has distinctive inclusions not found in ruby from any other locale: allanite, fuchsite and muscovite. These features can be used to help gemologists identify the source of these stones.

The debut of the Micro-World section includes a look at a 30-million-year-old polished Dominican amber containing a long-legged mite, as well as a dark green apatite that, when broken, yielded a fascinating orange calcite inclusion. Upon magnification, the spherical inclusion had the appearance of a round orange mask with purple fluorite “eyes.” The Micro-World team (Nathan Renfro, Elise Skalwold and John Koivula) also examined a bi-color double-eye cabochon tourmaline that showed a pink band on one side and a colorless band on the other, despite the fact that the chatoyancy-causing growth tubes − shown clearly in the photomicrograph − were only in the colorless portion.

The GIA lab in Bangkok examined six melee-sized colorless HPHT synthetic diamonds, ranging in size from .005 ct. to .01 ct. These synthetics, which were disclosed samples sent for research, showed no tell-tale inclusions or distinct absorption lines. The DiamondView device revealed blue or green fluorescence and characteristic growth patterns of synthetics. 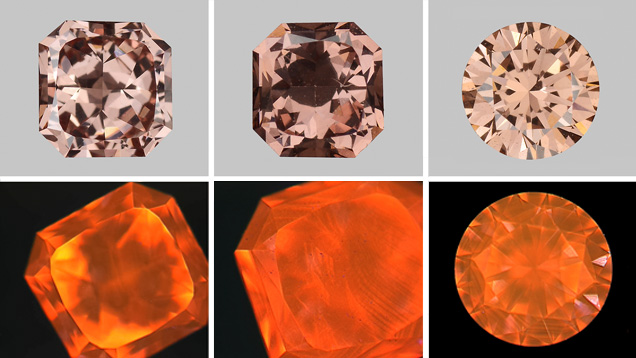 In addition, the New York lab examined three pink-to-brown CVD-grown diamonds that were further treated by a process known as low-pressure, high-temperature (LPHT). The diamonds, which weighed 0.37, 0.31 and 0.25 ct., were heated and subjected to low pressure to enhance their color. DiamondView imaging showed these diamonds had the orange fluorescence and linear growth striations typical of CVD synthetics. 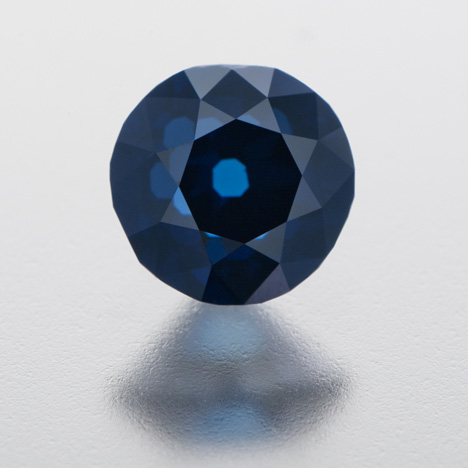 Another extraordinary type IIb was a natural 1.42 ct. Fancy gray-purple diamond submitted to the Carlsbad lab. The diamond was unusual for its color, but also for its extremely strong photoluminescence.

GIA researchers examined several unusual cultured pearls, one a large cream and white colored baroque shaped piece with an unusual translucent ring on one side. Upon examination, the pearl was found to be assembled, with a new section of nacre applied to an area that had broken off. The second was a necklace of Chinese cultured pearls with a strong pinkish-purple color. Tests showed these to be cultivated in fresh water, demonstrating that Chinese producers are growing ever larger and higher-quality pearls.

Beryllium diffusion and lead-glass filling treatments have been well-publicized in the past decade. The GIA lab in Carlsbad recently examined a 4.25 ct. orange sapphire that had undergone both treatments. Magnification revealed numerous fractures filled with glass. Further testing revealed that it was treated with beryllium (Be). Because the Be treatment requires much higher temperatures (1800 to 1850 degrees C) than the glass filling process (900 to 1400 C), it was certainly done first. It was the first time GIA had encountered a gemstone with both treatments.

Gems & Gemology is GIA’s quarterly technical journal, reporting the latest advances in gemological research since 1934. G&G Brief presents an overview of the content of the latest issue of the journal.

GIA researchers analyzed 90,000 natural pink diamonds to find out how they formed and got their color.