In February 2014, these authors reported the first example of a synthetic nano-polycrystalline diamond (NPD) detected by a gemological laboratory. The 0.9 ct marquise was small and so heavily included with graphite crystals as to receive a Fancy Black color grade. The East Coast laboratory recently detected another undisclosed NPD synthetic diamond, a 1.51 ct Fancy Black round.

This NPD specimen was larger and had a much better transparency than the previous NPD, though it still graded as Fancy Black (figure 1). Infrared spectroscopy showed a diagnostic absorption pattern for diamond, with strong absorption in the one-phonon region (approximately 400–1332 cm–1). Absorption in this region is usually attributed to nitrogen impurity in different aggregation states, but careful observation showed otherwise. 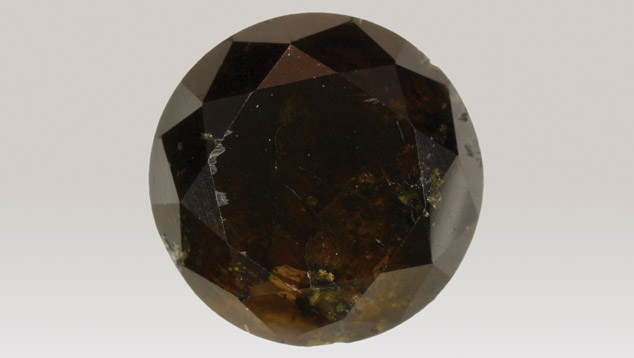 The specimen’s infrared absorption pattern matched that of known NPD samples (figure 2). Further testing, including Raman spectroscopy and DiamondView imaging, confirmed the sample to be a NPD synthetic diamond. Microscopic observation revealed that the host material had the yellow color typical of previously reported NPD samples (see E.A. Skalwold, “Nano-polycrystalline diamond sphere: A gemologist’s perspective,” Summer 2012 G&G, pp. 128–131). The sample was heavily included with graphite, but less so than the previously reported 0.9 ct marquise, and therefore it had a better transparency (figure 3). 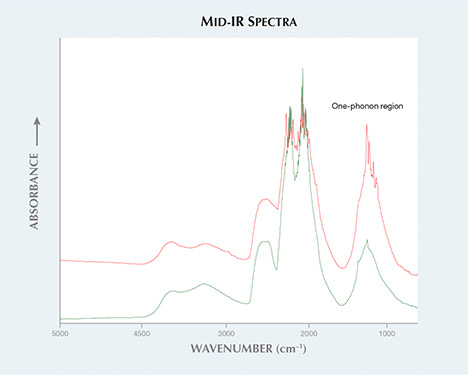 Figure 2. The mid-FTIR spectrum of the 1.51 ct black NPD synthetic diamond (red) displayed absorption in the one-phonon region similar to that of known NPD samples (green).

The origin of this synthetic diamond is not known, but it showed obvious improvements in size and quality compared to the marquise reported in February 2014. In the future, NPD synthetics could pose an identification challenge to the gem and jewelry industry. Careful gemological observations and advanced testing techniques were required to identify this undisclosed synthetic diamond.