The rough was partially polished on two opposite sides, where hexagonal growth zoning was easily visible with the unaided eye (figure 1). Several striations and grooves were visible on the side of the rough.

The pattern and nature of these grooves raised suspicion about the rough’s origin. Closer examination under magnification revealed that hexagonal zoning and fine silk on the partially polished surfaces were confined to a depth of approximately 1.5 mm. Two thin slabs of about 1.5 mm each appeared to be attached to the two opposite ends of the rough. No other inclusions were found under magnification. We did observe a slight difference in the color of the thin layer and the main body. The thin slabs were purplish red, while the main body was pinkish red. Since the hexagonal zoning was within the thin slabs and the physical properties were consistent with ruby, we concluded that they were natural ruby slabs. The natural ruby slabs were pasted with a glue that made them appear orangy in transmitted light, and trapped gas bubbles were also observed in the junction plane (figure 2). The two natural slabs were polished to show the hexagonal zoning, while the rest of the rough was kept coarse to restrict views of the interior. Fine triangular grooves were engraved on the rough’s surface to imitate the natural growth markings of ruby. 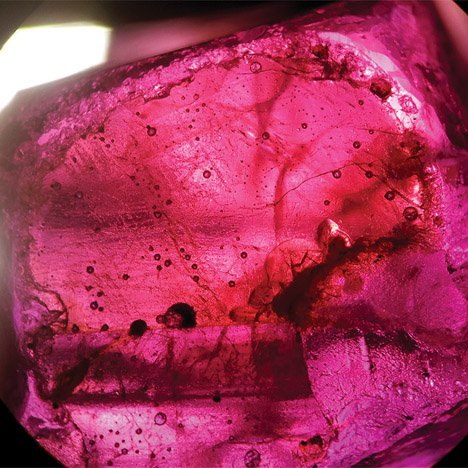 Figure 2. In transmitted light, the natural ruby slab appeared orangy due to the adhesive. Trapped gas bubbles are seen in the junction plane. Photo by Meenakshi Chauhan; magnified 30×.

Under magnification, a small cluster of gas bubbles was visible through one of the smooth grooves on the specimen’s main body, evidence of synthetic origin. Several fractures were also present in the rough, probably an attempt to imitate fingerprint inclusions. Under short-wave UV, the natural slabs fluoresced red while the synthetic ruby rough showed a strong chalky fluorescence (figure 3). Chalky fluorescence was further evidence of the rough’s synthetic origin. 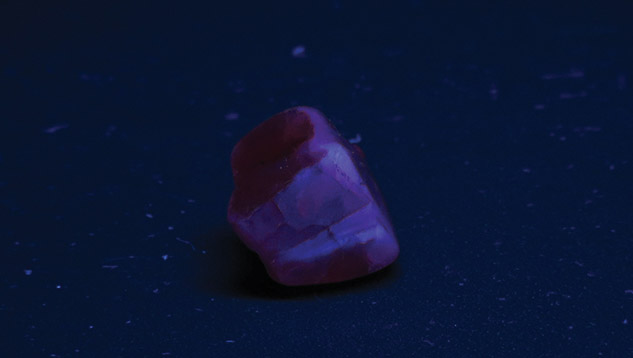 Cut and polished composites are regularly encountered, but a composite where synthetic rough is fashioned to imitate natural gem material poses a more significant challenge.