In 2005, a thin film (10 µm) of synthetic diamond grown by chemical vapor deposition was deposited on the pavilion of a 0.27 ct natural diamond. The CVD layer was deliberately doped with boron to create a bluish color. No subsequent polishing was performed. Rather than blue, the resulting color was a less desirable gray. This natural diamond with CVD overgrowth was then reset in a ring and worn daily by the author for the next eight years. Recently, this hybrid diamond was removed from its setting for gemological and spectroscopic characterization and to assess the current state of the CVD film.

Well-controlled durability studies have examined non-diamond coatings on diamond (e.g., A.H. Shen et al., “Serenity coated colored diamonds: Detection and durability,” Spring 2007 G&G, pp. 16–34) and nanocrystalline diamond coatings on non-diamond materials (J.E. Shigley et al., “Characterization of colorless coated cubic zirconia [Diamantine],” Spring 2012 G&G, pp. 18–30). To our knowledge, however, none have been performed on CVD diamond films grown on natural diamond. The assessment of this one sample, given the exposure a ring is usually subjected to, can indicate the long-term stability of such coatings on diamond. The expectation was that such films would remain stable, as there is no lattice mismatch in the crystal structure between the CVD synthetic film and the natural diamond. Lattice mismatch and the resulting low cohesion at the diamond/non-diamond interface typically result in moderate to very poor durability.

It was difficult to find evidence of the CVD layer using spectroscopic techniques. FTIR absorption (which generally provides data from the bulk of the diamond) revealed no CVD-specific features, only that the underlying diamond was type Ia. Using PL spectroscopy, which collects data from a limited area, it was difficult to find spectroscopic evidence of the CVD film, even when the PL data were collected in confocal mode. No CVD-related 3123 cm–1 peak was detected in IR absorption, and the silicon peak at 737 nm was not observed in PL. The best evidence of the CVD layer’s continued existence on the diamond was from its unusual appearance in visual observation (figure 1) and microscopic analysis (figure 2). The pavilion also showed electrical conductivity, which provides another indication of the boron doping. 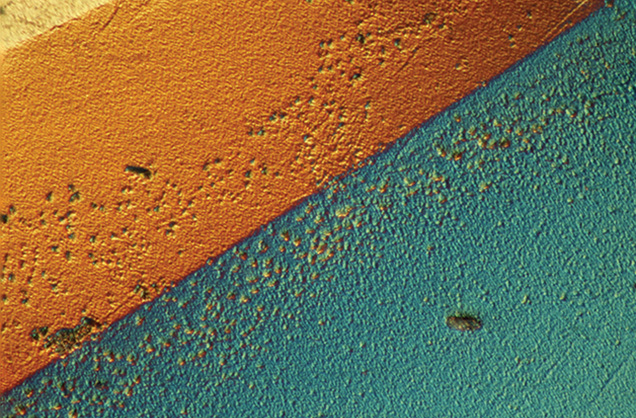 Figure 2. This differential interference contrast image shows the irregular texture of the CVD overgrowth film on the pavilion facets of the 0.27 ct natural diamond. Each facet is a different color, and the boundaries between colors are facet junctions. Image by Nathan Renfro; field of view 246 microns.

By examining the pavilion of the diamond at high magnification, we could assess the condition of the CVD layer after eight years of daily wear. The film was still largely intact, covering the entire pavilion and containing only a few sporadic pinholes. There was no noticeable degradation at the facet junctions. The obvious color zoning in figure 1 that appears to divide the diamond into quadrants is likely due to differences in deposition and boron incorporation rates on the various facets. Recently, the diamond was annealed twice, at 600°C and 700°C for one hour each in a reducing atmosphere, in an effort to make it appear bluer. This treatment changed the color from Fancy Dark brownish yellowish gray to Fancy Dark gray.

As treatments become more sophisticated and move from the laboratory into the trade, the need for accurate detection only intensifies. Nevertheless, such semipermanent films are identifiable and reiterate the need to use both spectroscopic and traditional methods for gemological characterization.

Sally Eaton-Magaña is a research scientist at GIA’s laboratory in Carlsbad, California.