While curved color zoning is typically associated with melt-grown synthetics, particularly flame-fusion products such as synthetic corundum and synthetic spinel, an unusual natural emerald with this feature was recently examined in the Carlsbad and Bangkok laboratories. This 1.17 ct emerald was obtained for GIA’s permanent reference collection (sample number 100305160993) at a street market in Kabul, Afghanistan, for its very unusual inclusion scene. The stone was represented as being of Afghan (Panjsher) origin, but the internal inclusions seemed to resemble those of emeralds collected from the Swat Valley of Pakistan. Careful chemical analysis by laser ablation–inductively coupled plasma–mass spec­trometry (LA-ICP-MS) was performed at the GIA lab in Bangkok. The chemical data showed a fairly even composition within the sample except for chromium, which varied proportionately with the green color zoning (from approximately 300 to 9000 ppmw Cr). The chemical data of the unusual emerald were compared to those of reference standards from known deposits, particularly Panjsher and the Swat Valley, to investigate its probable origin. The data showed a close match only with the reference emeralds from the Swat Valley, making that the most likely origin. 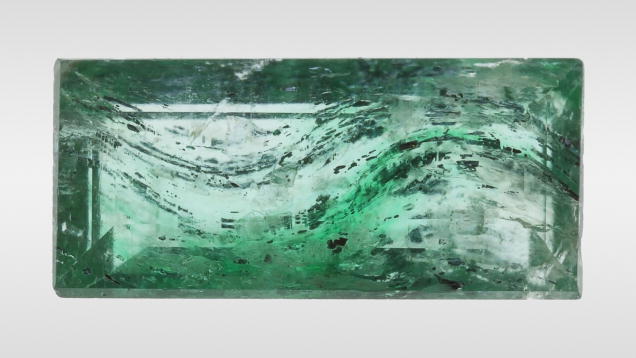 The gemological properties showed an RI of 1.589–1.597 and a visible spectrum consistent with emerald. The stone showed no reaction to a standard 4-watt gemological UV light source. Microscopic examination revealed numerous inclusions of pyrite, carbonates, and reflective thin films oriented perpendicular to the optic axis (parallel to the length of the stone), a typical assemblage of a natural emerald. The most unusual observation about this stone was a prominent green “S” shape color zone that ran down its length (figure 1). Emerald’s hexagonal structure would ordinarily lead one to expect planar or angular color zoning related to the crystal morphology. The presence of curving zones in a faceted emerald was an anomaly that needed further examination. 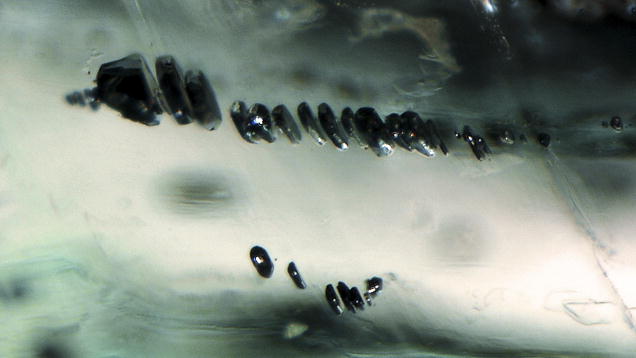 One possible explanation for the unusual zoning is that compressional geological forces caused shearing along the emerald crystal’s basal plane. This was supported by the appearance of pyrite grains, which looked as if single, brittle pyrite crystals had been sheared and slightly displaced parallel to the basal plane of the beryl host (figure 2). This apparent lateral shearing movement throughout the emerald crystal could have caused the pyrite grains to separate into aligned tabular fragments offset from each other and the beryl host. Also observed between the pyrite grains were planar optical irregularities. These planes suggested localized shear zones that would have significantly higher defect concentration, giving rise to the optical nonconformity consistent with their location between the tabular pyrite inclusions. Under cross-polarized illumination, we observed dense clusters of birefringent crystals that were essentially invisible under non-polarized lighting. The low relief of these dense inclusions suggested they were beryl inclusions within the beryl host, possibly a result of partial recrystallization caused by dynamic environ­mental conditions.

Gemology is generally a non-destructive, observational science, which can be limiting at times. Destructive techniques could have revealed the crystallographic orientation of the pyrite grains with respect to each other and explained the stone’s unusual structure. Because this was a unique sample, destructive testing was not a practical approach. While the exact cause of this unusual zoning remains unknown, it is certainly interesting and thought provoking.The discovery of such gems demonstrates that there are complex geological conditions we do not yet understand which, when observed, invite further gemological exploration.