Recently the East Coast laboratory received four baroque-shaped pearls ranging in size from 9.07 × 13.50 × 14.03 mm to 9.32 × 11.34 × 15.77 mm  and weighing between 10.63 and 13.60 ct. On each of the four samples, the outermost surface nacre layers exhibited large holes and gaps, revealing one or more distinct nacreous layers underneath (figure 1). These underlying nacreous layers displayed good luster and overlapping platelet surface structures, and the large gaps between the inner and outermost nacre layers indicated that smaller pearls had been used as nuclei during the culturing process.

Further gemological testing by energy-dispersive X-ray fluorescence (EDXRF) and inductively coupled plasma–mass spectrometry (ICP-MS) confirmed that both the outer and inner nacre layers originated from a freshwater environment. Some of these pearls contained widely varying amounts of trace elements (i.e., Mn and Mg) between the outer and inner layers, but previous studies have found that uneven distribution of trace elements can also occur in a pearl’s cross section (R. Lu et al., “Operational considerations of EDXRF, LA-ICP-MS, and photoluminescence techniques in the analysis of pearls,” Summer 2011 G&G, pp. 149–150).

Two did not show any distinct internal demarcation when examined with X-radiography in various directions (figure 2). This lack of a clear internal boundary may be due to multiple culturing attempts using the same pearl as a nucleus, which can cause overlapped internal structures and multiple distinct nacreous layers under the surface, as shown in the third sample. In addition, structures typical of non-bead cultured pearls were observed in these micro X-radiographs, suggesting that freshwater cultured pearls were used as nuclei during the culturing process.

Figure 2. X-radiographs show partial demarcation between the outer and inner structures of cultured pearls 1 and 2, but fail to reveal any clear boundaries in samples 3 and 4. Photo by Chunhui Zhou.

Finally, photographs of the X-ray fluorescence reactions of all four pearls were taken in a dark environment (figure 3). Various intensities of green and yellowish green fluorescence could be observed within each nacreous layer, presumably due to varying concentrations of manganese between layers and among the pearls themselves (H.A. Hanni et al., “X-ray luminescence, a valuable test in pearl identification,” 2005 Journal of Gemmology, 29, 5/6, pp. 325–329). More interestingly, reddish fluorescence was also observed around the damaged areas of the nacre in samples 3 and 4. This was possibly caused by foreign material between the “nucleus-pearl” and the outer nacre layers, which may also contribute to the lack of distinct demarcation observed in the cultured structure. 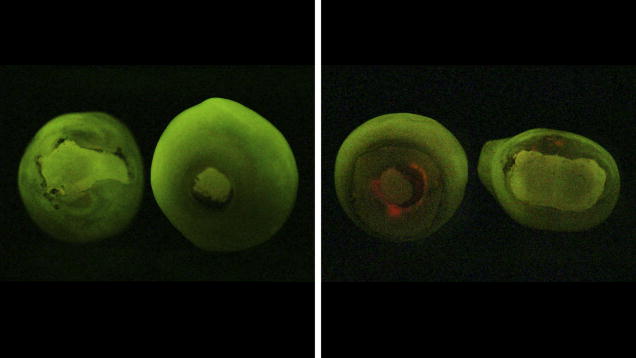 Figure 3. X-ray fluorescence images of the four cultured pearls showing various degrees of green or yellowish green fluorescence between inner and outer layers. Atypical orangy red fluorescence is also visible between the layers in samples 3 and 4. Photo by Chunhui Zhou.