Figure 1. The four mine locations in the vicinity of Mogok from which the samples in this study were sourced. Inset: A map of Myanmar showing Mandalay and Mogok.

Myanmar (formerly Burma) has been one of the most important producers of high-quality blue sapphires for centuries. The gemstones are mined from various parts of the Mogok Stone Tract and show some variation according to their specific origin within the tract. It is widely known within the gemological community that separating metamorphic sapphires from Myanmar, Sri Lanka, Madagascar, and other geologically similar sources still poses some challenges. In this study, 69 untreated samples from four distinct sapphire mining areas in Mogok were examined (figure 1).

The aim of this research was to characterize the gemological properties, inclusions, spectroscopic features (FTIR, UV-Vis-NIR, and Raman), and chemistry of Burmese blue sapphires in order to assist with country-of-origin determination. The samples exhibited colors ranging from blue to violetish blue. Standard gemological properties recorded were consistent with most natural blue sapphires: refractive index (RI) of nω = 1.769–1.770 and nε = 1.760–1.762, birefringence of 0.008–0.009, and hydrostatic specific gravity (SG) of 3.81–4.04. The samples were inert under short-wave ultraviolet (UV) radiation. The majority were also inert under long-wave UV radiation, although some violetish blue samples displayed a weak red reaction. Under magnification, lamellar twinning, silk, particle bands, negative crystals, variously shaped thin films, brownish platelets of ilmenite, iridescent fluid inclusions, and various minerals (such as crystals of zircon, feldspar, mica, green chromite, and nepheline) were typically observed. The Fourier-transform infrared (FTIR) spectra revealed the presence of minerals such as boehmite, kaolinite, and diaspore, and/or a single very weak peak at 3309 cm–1. Ultraviolet/visible/near-infrared (UV-Vis-NIR) spectroscopy revealed the typical patterns seen in metamorphic blue sapphires, including three absorption peaks at 377, 388, and 450 nm related to Fe3+ ions and one absorption band centered at 580 nm in the ordinary (o-) ray and at 700 nm in the extraordinary (e-) ray of Fe2+-Ti4+ pairs.

One of the most interesting results to come from the study was the slight variation observed in the chemical signatures between sapphires from the different areas in Mogok and other metamorphic blue sapphire sources, revealed by laser ablation–inductively coupled plasma–mass spectrometry (LA-ICP-MS) analysis. In cases where few or no inclusions were present to assist with origin determination, plotting Fe versus V provided useful supporting data by which to separate Mogok sapphires from Sri Lankan and Madagascan sapphires. The moderate to high Fe content (up to 2300 ppma) of these sapphires from certain areas of Mogok sets them apart from other sources with lower Fe. This study proved that a combination of various analytical techniques and interpretation of the subsequent data, especially that obtained from LA-ICP-MS, FTIR, UV-Vis-NIR, and microscopic observation, should be taken into account when providing opinions on the country of origin for Burmese blue sapphires.

The geographic origin of gemstones has emerged as one of the major factors affecting their sale on the international market, in large part due to the prestige attributed to certain origins (e.g., rubies from Myanmar or sapphires from Kashmir), but also because of political and ethical reasons (trade bans and fair trade). This provides a strong motivation to establish accurate scientific methods to identify the provenance of high-end colored gemstones such as ruby and sapphire.

Methods used to determine ruby provenance include the observation of inclusions and gemological features, trace element analysis, and oxygen isotope analysis. All these have proven useful in distinguishing corundum from different geological settings, but none of these methods are yet able to reliably distinguish between gems from different geographic regions that share a similar geo-logical setting (Groat and Giuliani, 2014). So far, no unique fingerprint exists and geographic origin remains a challenge, especially for high-clarity stones, emphasizing the need for a more powerful tool.

Here we present Sr and Pb isotope data for gem corundum from several localities of geologically similar deposits: rubies from amphibole-related (Mozambique, Greenland, Madagascar, and Tanzania) and marble-related deposits (Myanmar, Vietnam, Afghanistan, and Tanzania) and metamorphic blue sapphires (Myanmar, Sri Lanka, and Madagascar). This data will be evaluated with regard to its usefulness in determining the geographic origin of both ruby and sapphire, and the method’s usefulness for the development of a unique fingerprint for the country-of-origin determination will be discussed.

Golden sheen sapphire (GSS) has recently become popular in the gemstone market. This material was recovered from undisclosed deposits in a remote locality in northeastern Kenya near the Somali border. Its unique shimmering effect is created by hematite and ilmenite inclusions, and chromophores of its blue and yellow bodycolors have been studied in some publications. We compared the trace-element concentrations of these GSS with published data for blue sapphires from other localities and found similar compositions in sapphires from Garba Tula, central Kenya (Miura et al., 2018). The Garba Tula sapphire mine is known as a primary deposit of syenite/monzonite dikes within migmatites and gneisses in the Mozambique belt. The purpose of this study is to clarify the relationship between these localities by comparing GSS with Garba Tula sapphires.

In addition to the 23 GSS samples documented by Miura et al. (2018), we obtained six blue and five yellow cabochons from the same supplier. These 11 samples were reportedly from the same deposit. Being less included, they were more suitable for comparing trace-element concentrations. We also obtained more than 60 rough samples from Garba Tula from another reliable source. These samples were mainly blue with some yellows, and some were heavily included with hematite/ilmenite needles. The included samples were similar to GSS in their characteristic mineral inclusions such as hematite, ilmenite, magnetite, zircon, mica, and carbonate minerals. From the Garba Tula samples, pieces with fewer inclusions were randomly selected for quantitative analysis with LA-ICP-MS.

The 11 less-included GSS samples and the included GSS had similar trends in their key elements. Less-included samples also showed a Mg-Ti ratio corresponding with coloring theory: a higher ratio in yellows and a lower ratio in blues. The blue sapphires from Garba Tula had a wider range of elements but overlapped with GSS in all key elements for both blue and yellow bodycolors. The similarity of inclusions and trace-element trends indicates that the geological background of GSS is strongly related to that of Garba Tula sapphires. Garba Tula is located in the up-slope area of a drainage basin of the Juba and Shabelle Rivers, which flow into the Indian Ocean. Bimodal seasonal precipitation and poor vegetation coverage can cause severe weathering and erosion, and the weathered corundum-hosting rocks are sometimes washed and transported downstream. Topographic features suggest that materials with high specific gravity such as corundum might be deposited close to the Somali border, where meandering channels are predominant in the sub-basin of the Lag Dera seasonal river, a branch of the Juba and Shabelle Rivers. This is a useful example of combining chemical analyses and inclusion studies with geomorphological interpretation to approach origin determination of gemstones whose placer deposit locality is unknown.

Recent LA-ICP-MS analysis performed on sapphire crystals from Bingham Canyon, Utah (figure 1, left), found broad similarities with sapphire from Yogo Gulch, Montana (figure 1, right). Bingham Canyon sapphire occurs in at least nine different volcanic units that are approximately the same age as the Cu-Au-Mo mineralization (which occurred 39 Ma). These volcanic units are small-volume block-and-ash flow eruptions that comprise the flanks of a large inferred stratovolcano. Sapphire does not occur in older or younger magmatic events unrelated to Cu mineralization. Bingham Canyon and Yogo Gulch sapphires have broadly similar chemistry in terms of Mg, Fe, and Ga. V and Cr contents are moderately higher in Bingham Canyon sapphire. However, one important distinction is that the Ti enrichments (as well as Nb and Zr) found in the Bingham Canyon sapphires suggest the presence of significant Ti-rich micro-inclusions, which is not typically seen in Yogo sapphires. Broad similarities are not unexpected considering that they are both related to mafic/potassic Eocene magmatism in the western United States. Sapphire at Bingham Canyon occurred after primitive magma transected Proterozoic mica-rich lithospheric mantle and melted Al-rich rocks such as phlogopite-bearing veins. At Yogo, phlogopite is also a fundamental mineral in the lamprophyric dike that hosts the sapphire. Modeling suggests that primitive mafic magma ponded at the base of the crust and melted Al-rich Proterozoic metapelites. 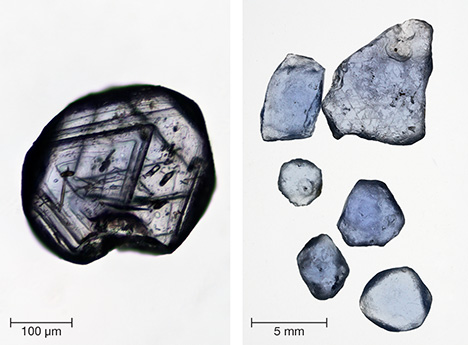 At Bingham, sapphire crystals (50–500 μm) are two orders of magnitude smaller than those at Yogo, but they are uniformly distributed in most of the intrusive and volcanic units that comprise the stratovolcano. The question of origin remains for both Bingham Canyon and Yogo sapphires: Are they xenocrysts in the traditional sense, or are they intimately related to formation of each magma?

Tourmaline-Sapphire-Phlogopite Rocks of the Badakhshan Province of Northeastern Afghanistan: Insights into a Favorable Environment for Blue Sapphire Development

The sapphire-bearing metamorphic rocks found in the Badakhshan Province of northeastern Afghanistan provide insights into the chemical and mineralogical environments that favor development of the blue sapphire variety of corundum. These rocks comprise a matrix of randomly oriented pale brown to pale green phlogopite with porphyroblasts of dark blue tourmaline and blue to colorless sapphire. Minor amounts of green spinel, feldspar, and apatite have also been noted as coexisting phases in these rocks. The tourmalines are prismatic. The phlogopite exhibits minor alteration to clinochlore. The sapphires display a range of color intensities from colorless to dark blue, and some show color variation in different sectors. As expected, no quartz occurs in the samples.

The unusually K-, Mg-, Al-rich and Si-, Ti-poor bulk composition of the sapphire-bearing rock is consistent with a metasomatic modification of a precursor rock composition. It is likely that boron-bearing fluids fluxed the rock system. The oscillatory zoning in tourmaline suggests the former presence of dynamic fluids during initial tourmaline growth. Patchy zoning on the outer portions suggests that the tourmalines overgrew and replaced matrix micas. A metamorphic overprint on rocks with these unusual bulk compositions and mineral assemblages is commensurate with the development of sapphire.

The U.S. Geological Survey (USGS) publishes world production figures for more than 80 mineral commodities annually. Colored stone production, unlike that of diamond, is inherently difficult to estimate because of the fragmentary and commonly informal nature of the industry, the lack of government oversight in many of the source countries, and the wide quality variations for each gem material. For these reasons, world production figures for colored stones were not published by the USGS until 2008, when production of emerald, ruby, sapphire, and tanzanite between 1995 and 2005 were estimated. Based on government data, company reports, and a review of the colored stone mining literature, the agency has estimated global production of amethyst, emerald, lapis lazuli, ruby, sapphire, spinel, tanzanite, and tourmaline for the years 2006–2016.

From 1995 to 2005, Colombia was the world’s leading emerald supplier, accounting for about half of global production by volume. Because of the long-term decline in Colombia’s production and the increased production at Zambia’s Kagem mine, Zambia subsequently became the world’s leading producer. In Brazil, mining continued in Bahia and Minas Gerais states and ended in Goiás. Russia’s Malyshev mine accounted for a substantial share of world production before shutting down in 2008. Ethiopia, which previously produced emeralds intermittently, emerged as a potentially large-scale source in late 2016.

Sapphire mining declined in Cameroon and China. Madagascar’s output fell with the depletion of near-surface deposits at Ilakaka and Sakaraha, as well as the 2008 ban on rough gem exports, before increasing because of new discoveries. Mozambique became a source of sapphire with the discovery of new deposits at Montepuez. Production also increased in Kenya.

Rio Grande do Sul State in Brazil appears to produce a substantial majority of the world’s amethyst (table 1). Uruguay’s production was estimated to have nearly tripled between 2006 and 2016. In Bolivia, Tanzania, and Zambia, production peaked in 2009.

In Kenya and Mozambique, tourmaline production peaked in 2013. The Democratic Republic of the Congo, Namibia, and Rwanda also emerged as sources of tourmaline in recent years.