Figure 1. A schematic of the model for each color state of a chameleon diamond based on absorption from valence band states to the proposed acceptor state being blocked by full compensation (the “yellow” state) or incomplete compensation when exposed to room lighting (the “green” state).

Complex Charge Transfer in Chameleon Diamonds: A Model of the Color-Change Process

A group of natural diamonds known as chameleon diamonds change color from green to yellow based on their exposure to light and heat. These diamonds also emit long-lived phosphorescence after UV excitation. We have observed the optical response of these diamonds to optical and thermal excitation and developed a model to explain the observed phenomena. A principal element of the model is the proposal of an acceptor state (figure 1), which should be observable in the near-infrared (NIR) region. Subsequently, we have observed the NIR absorption to this acceptor state, supporting our model of charge-transfer processes in these diamonds.

In diamond grown by the CVD method, nitrogen behaves differently than it does in natural and HPHT-grown diamond. The most striking peculiarities are low efficiency of doping, formation of unique optical centers over a wide spectral range from the ultraviolet (UV) to the IR regions, and formation of unusual defects related to aggregated nitrogen. In order to gain a better insight into this problem, several nitrogen-doped specimens grown in GIA’s CVD diamond lab and a few commercial yellow CVD-grown diamonds have been studied in their as-grown (as-received) state and after electron irradiation and annealing at temperatures up to 1900°C (low-pressure, high-temperature treatment). 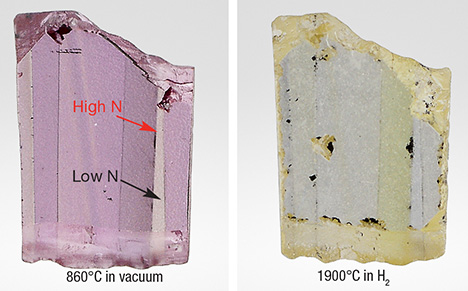 Figure 1. The distribution of color in commercial nitrogen-doped CVD-grown diamond after electron irradiation and subsequent annealing at temperatures of 860°C (left) and 1900°C (right).

An assumption is made that N atoms may form clusters in highly nitrogen-doped CVD-grown diamonds. These clusters may result in broad-band luminescence at wavelengths of 360, 390, 535, and 720 nm and a strong broadening of the ZPLs of many optical centers.

Laboratory-grown diamonds are created using either high-pressure, high-temperature (HPHT) or chemical vapor deposition (CVD). With the influx of manmade diamonds on the market over the past few years, instrument producers and labs have launched screening and detection instruments to help dealers and jewelers spot HPHT- or CVD-grown specimens.

Most standard instruments are inaccurate testers or just type I and type II screening devices that do not give a definite answer about diamond genesis. Over the last four annual Mediterranean Gemmological and Jewellery Conferences and more than 30 workshops given in 17 countries, we have assembled a portable new Synthetic Diamond Identification Kit. The kit comprises two portable instruments and two booklets:

The combination of this kit with professional training could identify all HPHT-grown diamonds and most CVD-grown diamonds on the market, loose or mounted. Also available are melee and jewelry inspectors consisting of larger UV lamps with magnifiers designed for identification of small loose or mounted diamonds.

Most natural diamonds have a strong reaction to long-wave UV; this reaction is usually weaker (mostly blue) at shorter wavelengths. Laboratory-grown diamonds generally exhibit more intense fluorescence with short-wave UV compared to long-wave UV, with a chalky coloring tinged with green or yellow. Most HPHT-grown diamonds also phosphoresce. If a diamond is free of inclusions, fluorescence is a reliable screening test to flag suspicious stones that should be further checked under cross-polarized filters (figure 1).

Figure 1. This chart illustrates the steps in the screening and identification of lab-grown diamonds.

In the case of some rare near-colorless clean CVD-grown diamonds that do not show fluorescence or have a birefringence pattern that is coarse but resembling tatami in type IIa and weak patterns in natural Ia diamonds, additional tests using advanced spectroscopy and strong short-wave UV light to observe growth patterns are needed to confirm diamond genesis.