Natural yellow type Ia or “cape” diamonds, the most common of all colored diamonds, are identified by the N3 (415 nm) and N2 (478 nm) absorption lines in the UV-visible range. These defects produce the characteristic yellow hue, and the N3 line produces the blue luminescence, so often observed in these stones. Weaker bands at 452 and 465 nm may also be visible (C.M. Breeding and J.E. Shigley, “The ‘type’ classification system of diamonds and its importance in gemology,” Summer 2009 G&G, pp. 96–111).

The New York laboratory recently examined a 2.16 ct Fancy orangy yellow diamond (figure 1) with unusual features for a cape stone. When analyzed with a UV-Vis spectrometer, it exhibited a cape spectrum and an unexpected 480 nm band, a defect usually associated with orange color (figure 2). Infrared spectrometry revealed a well-defined IaAB diamond, as opposed to the saturated Ia spectrum typically associated with cape diamonds. These abnormal features prompted further testing, and the DiamondView revealed zoned blue and yellow fluorescence (figure 3). Raman spectroscopy of the transparent, elongated crystal within the diamond, visible in the DiamondView, identified it as a colorless garnet, a common inclusion in cape diamonds. 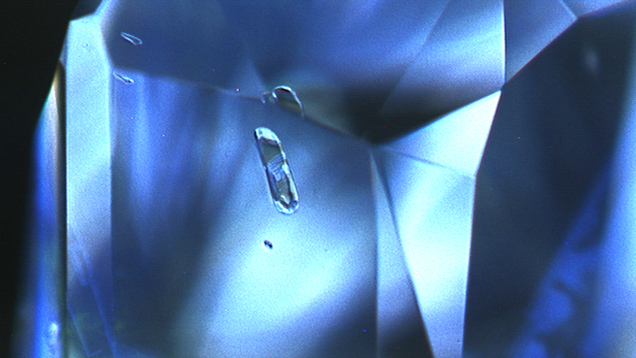 Figure 3. The cape diamond’s DiamondView image displays blue and yellow fluorescence, along with an elongated crystal. Image by Paul Johnson.

While the specific structure of the 480 nm optical defect is not yet understood, it is known to be associated with yellow fluorescence (Y. Luo and C.M. Breeding, “Fluorescence produced by optical defects in diamond: Measurement, characterization, and challenges,” Summer 2013 G&G, pp. 82–97). The defect is also sometimes attributed to substitutional oxygen in type I diamonds. From our data and test results showing no evidence of laboratory-produced alteration, we can conclude that this stone is a natural and very rare example of a cape diamond mixed with a 480 nm band causing the orange component.