Synthetic rubies with both curved growth and flux-type inclusions in a single stone occasionally appear in the trade. Often these are flame-fusion synthetics that have been quench-crackled and flux-healed to produce a more “natural” appearance. In other instances, flame-fusion material may be used as a seed for flux corundum overgrowth. If the seed crystal is not removed during cutting, it becomes part of the faceted synthetic gemstone (R.E. Kane, “A preliminary report on the new Lechleitner synthetic ruby and synthetic blue sapphire,” Spring 1985 G&G, pp. 35–39). 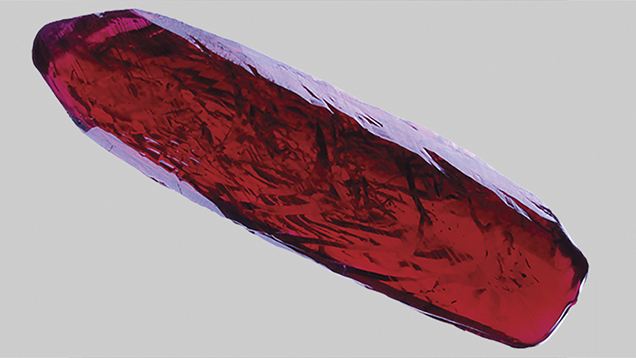 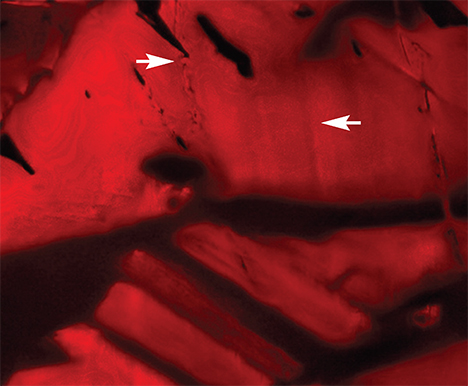 Microscopic examination using brightfield illumination revealed both curved striae and flux fingerprint patterns (figure 2). Careful examination of one end of the rough crystal showed a noticeable boundary between a flame-fusion core and a flux-grown overgrowth. Part of the core had not been covered by the flux overgrowth (again, see figure 1). The flux fingerprint inclusion penetrated just a few millimeters into the crystal and was only visible in the flux overgrowth (again, see figure 2). What appears to be a pronounced dark grayish reaction zone at the interface of flame-fusion and flux growth was observed (figure 3). The reaction zone likely indicates slight structural and chemical variations between the flame-fusion core and the flux overgrowth. When a new crystal is grown on top of an old crystal, the new growth starts on an irregular surface that was created when the old surface was melted back slightly at the melt temperature. When growth starts on an irregular surface, it creates a non-perfect crystal lattice match between the original seed and new overgrowth. This growth boundary face will disrupt the regularity of the structure of the growth crystal and contribute to the presence of the reaction zone (Schmetzer et al., “Flux-grown synthetic alexandrites from Creative Crystals Inc.,” 2012, Journal of Gemmology, Vol. 33, No. 1–4, pp. 49–81). In areas where the structural and chemical difference was not very distinct, the reaction zone was partially visible as dark grayish color patches (figure 4). The reaction zone looked grayish because the red bodycolor of the ruby masked what is probably a blue color zone caused by Ti-Fe pairs, a well-known defect that causes blue color in corundum (Summer 1991 Lab Notes, p. 112). The blue zone is along the interface of the flame-fusion core and flux overgrowth. 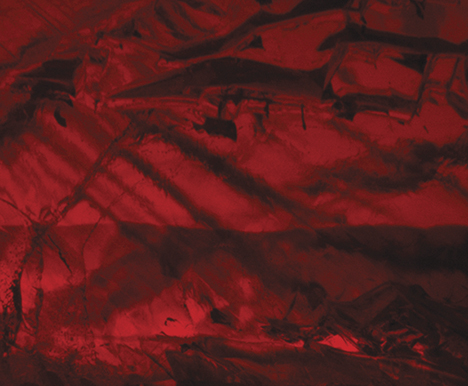 Figure 3. A dark grayish reaction zone was observed between the flame-fusion core and the flux overgrowth. Photomicrograph by Nathan Renfro; image width 15.67 mm. 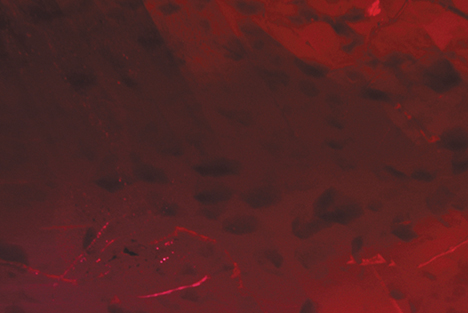 Figure 4. Also observed was a partial reaction zone between the flame-fusion core and the flux overgrowth. Photomicrograph by Nathan Renfro; image width 5.85 mm.

Advanced testing on the rough crystal using energy-dispersive X-ray fluorescence (EDXRF) analysis revealed traces of Ca, Ti, and Cr in the areas both with and without flux overgrowth; Mo was only detected in areas with the flux overgrowth. The concentration of Fe was below the detection limit of EDXRF. This result is consistent with the chemical element differences between flame-fusion and flux synthetics (S. Muhlmeister et al., “Separating natural and synthetic rubies on the basis of trace-element chemistry,” Summer 1998 G&G, pp. 80–101).

This synthetic ruby specimen is unusual in that regions originating from the two growth methods occur in the same crystal, with the half of the split boule seed crystal composing the bulk of the entire specimen. While flux overgrowth on flame-fusion seed crystals has been previously reported (E.J. Gübelin and J.I. Koivula, Photoatlas of Inclusions in Gemstones, Volume 2, Opinion Verlag, Basel, Switzerland, 2005, p. 352), this type of material is rarely seen in GIA’s laboratory, and this example was particularly unusual due to its large size.