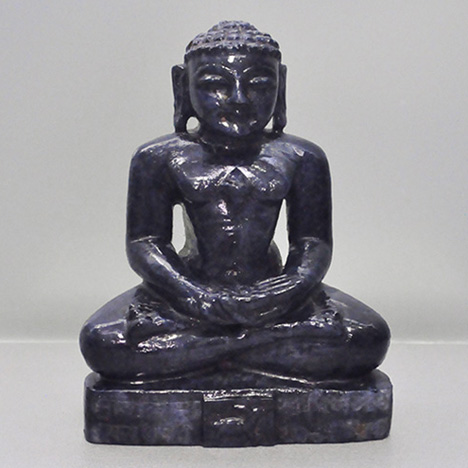 Figure 1. This 444 g dark violetish blue carving of Lord Mahaveera, submitted as sapphire, was identified as corundum coated with a blue polymer. Photo by Gagan Choudhary.

Coating, one of the traditional forms of enhancement, is still widely used on a number of gem materials. This contributor alone has reported on recent examples (e.g., Spring 2011 GNI, pp. 71–72; Summer 2012 GNI, pp. 154–155). The latest is a dark violetish blue carving of the early Jain spiritual leader Lord Mahaveera, submitted as sapphire (figure 1), that turned out to be corundum coated with a blue colored polymer.

The 444 g opaque carving measured 10.00 × 8.00 × 4.50 cm. Although it had the heft of sapphire, its dull, vitreous to waxy luster (again, see figure 1) raised doubts. Examination from different directions using a fiber-optic light revealed substantial color variation in different parts of the carving; some areas appeared pale blue, others dark violetish blue. This patchy, concentrated color variation is associated with dyes. Parallel whitish crisscross lines were also observed, consistent with the twinning planes associated with corundum. Further microscopic observation revealed color concentrations within cavities, large fractures, and twinning planes, confirming the material had been dyed (figure 2, left). Finer fractures appeared whitish, however. When the carving was rotated, some areas also displayed a chipped bluish layer on the surface (figure 2, right), an attribute typically found in coated materials. This layer was easily indented with a metal pin, suggesting the presence of a polymer. In addition to these features, the carving possessed a granular texture in many places, as commonly seen in rocks. These grains were also identified as corundum on the basis of the crisscross pattern of their twinning planes, which is consistent with corundum.

Figure 2. Color concentrations within cavities, large fractures, and twinning planes (left) confirmed the presence of a dye. The chipped layer of blue polymer (right) indicates a coating; this polymer layer was easily indented by a metal pin. Photomicrographs by Gagan Choudhary; magnified approximately 20×.

Under UV light (long- and short-wave), the carving displayed patchy white and chalky green fluorescence, mainly on the surface. A desk-model spectroscope revealed weak absorptions at 540, 610, and 640 nm, confirmed with UV-Vis-NIR spectroscopy. Such bands are associated with cobalt-based dyes. RI and SG could not be measured because of the piece’s large size, though visual features were sufficient to identify the carving as corundum.

Gagan Choudhary is deputy director of the Gem Testing Laboratory in Jaipur, India and a regular Gems & Gemology contributor. He can be contacted at gagan@gjepcindia.com.