If you were to wear more than three gold rings on your hand, you could be breaking the law—that is, if you were a woman during the Italian Renaissance. Sumptuary laws in Europe during the 14th and 15th centuries dictated what finery people of certain classes could legally wear, said Jan Krulick-Belin in a presentation at the 2013 Antique Jewellery and Art Conference in Atlanta. An art and jewellery historian, she has studied paintings as a glimpse into jewellery of the past, since few pieces from before the 18th century have survived. Bridal portraits, for instance, show young women dressed in fine gowns and expensive jewellery, which they were only allowed to wear for a brief period without being considered immodest. 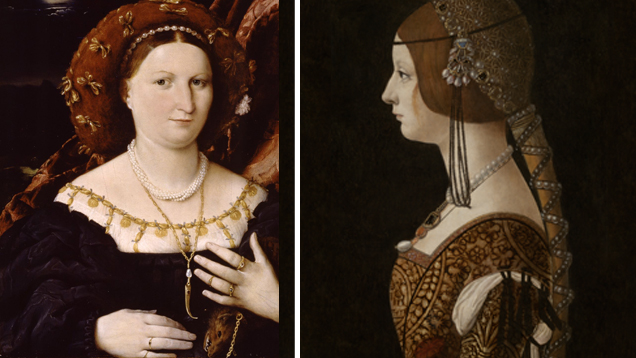 Historians study the styles of the past from portraits like that of Lucina Brembati (left), whose hair, dress and jewellery indicate a person of upper class. One of her rings bears the coat of arms of the Brembati family, another clue to her noble heritage. Painting by Lorenzo Lotto, circa 1518-1523, from the collection of the Accademia Carrara, Bergamo. The portrait on the right of Bianca Maria Sforza was painted at the request of her husband, Maximilian I, as a condition of marriage, prior to her appointment as Empress of the Holy Roman Empire. Painting by Giovanni Ambrogio de Predis, circa 1493, from the collection of the National Gallery of Art.
Krulick-Belin’s talk was one of many at the 36th annual conference known as “Jewellery Camp.” Held in Atlanta for the first time in 2013, the event was started in Maine by art nouveau jewellery expert Dr. Joseph Sataloff but later moved to New York and changed hands. Joyce Jonas ran the event until 2006, when jewellery appraiser and educator Edward Lewand took over with his wife, Sandy.

We had the opportunity to attend this year’s conference, which took place August 1–3 at the Cobb Galleria Centre, in conjunction with the Atlanta Jewellery Show. About 80 jewellery professionals and collectors attended three days of lectures on various aspects of antique jewellery. 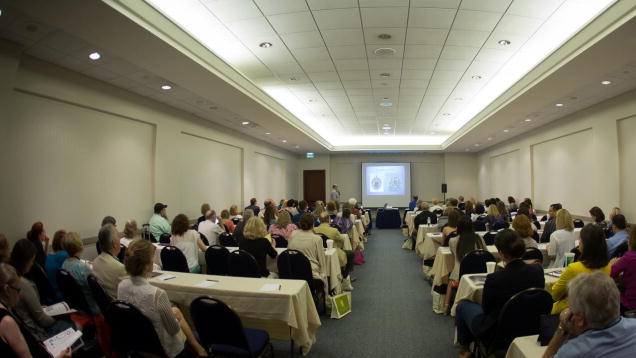 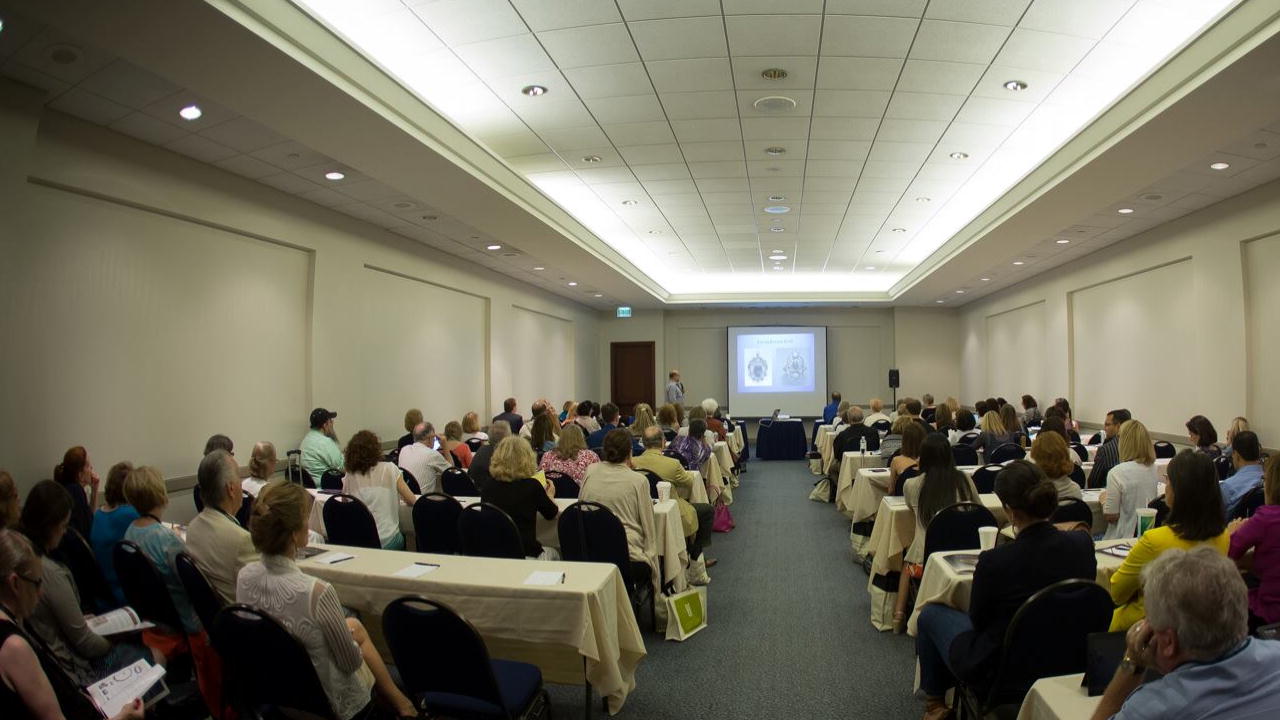 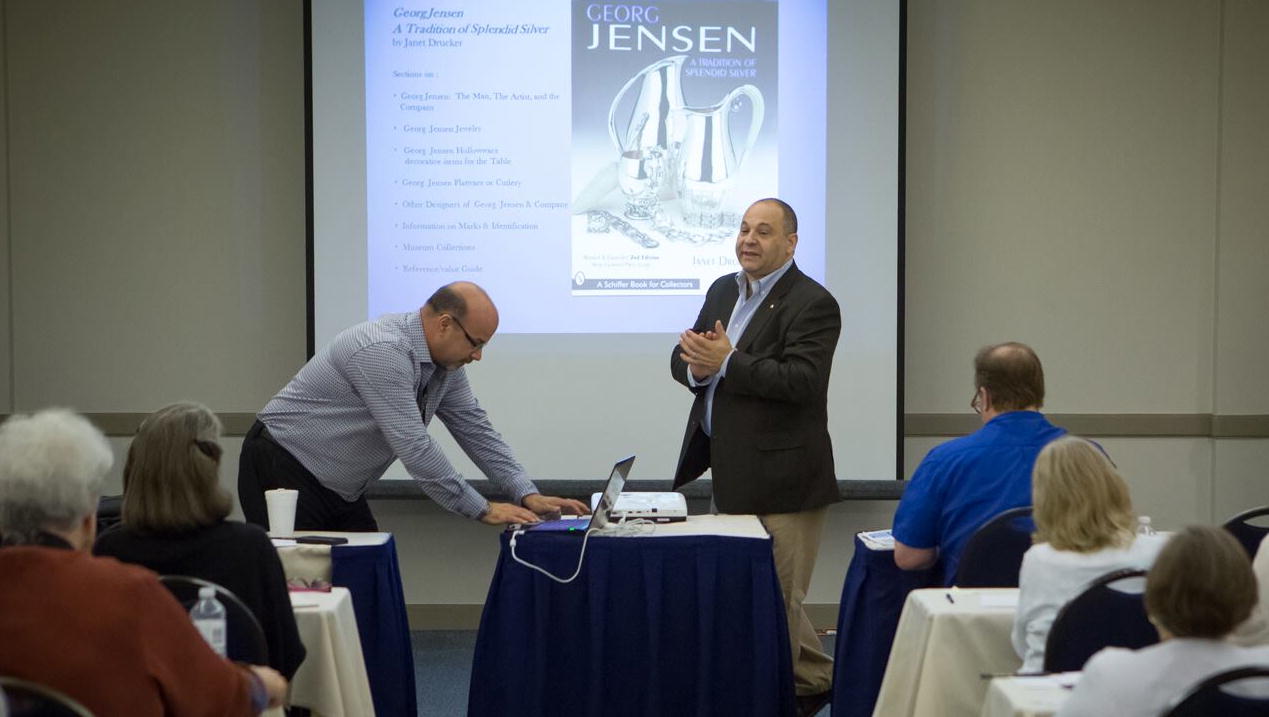 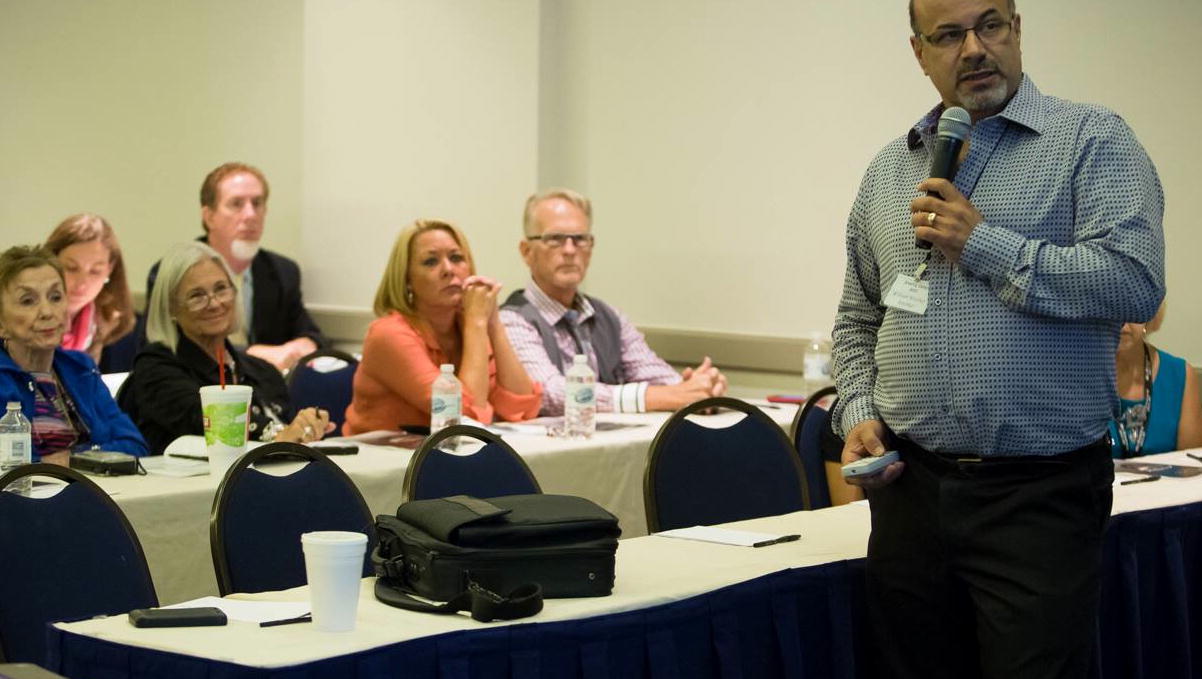 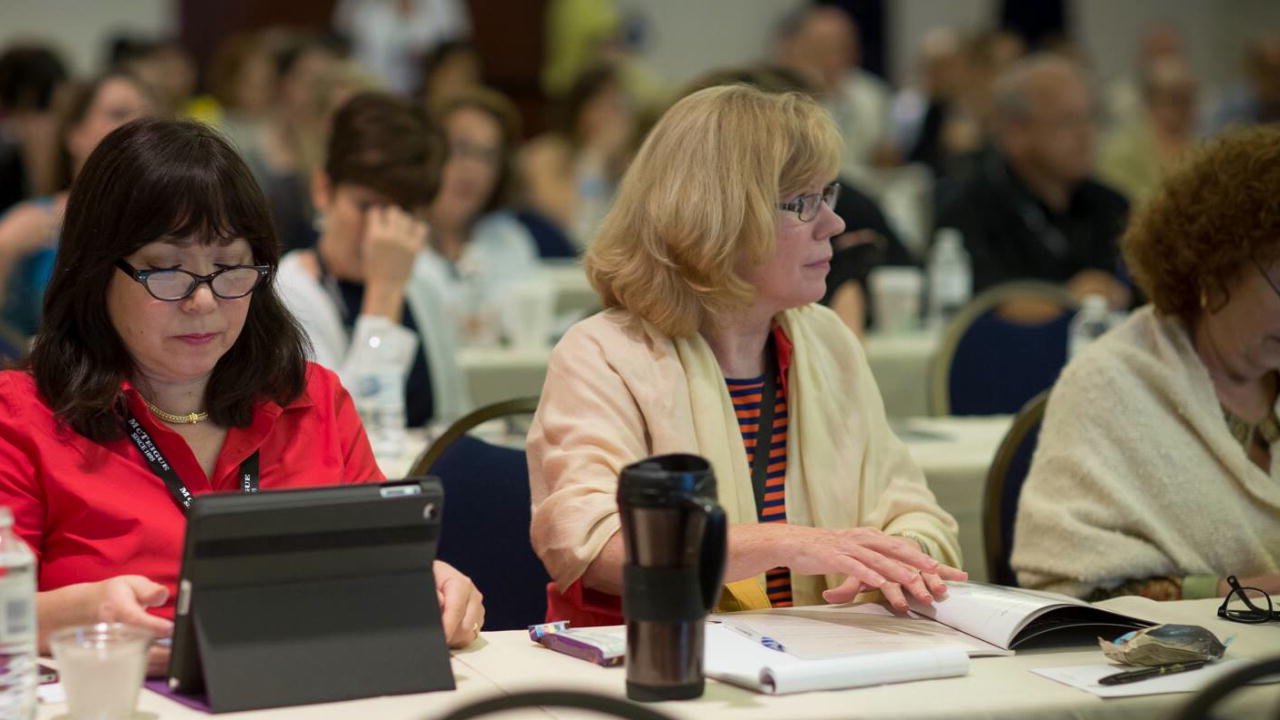 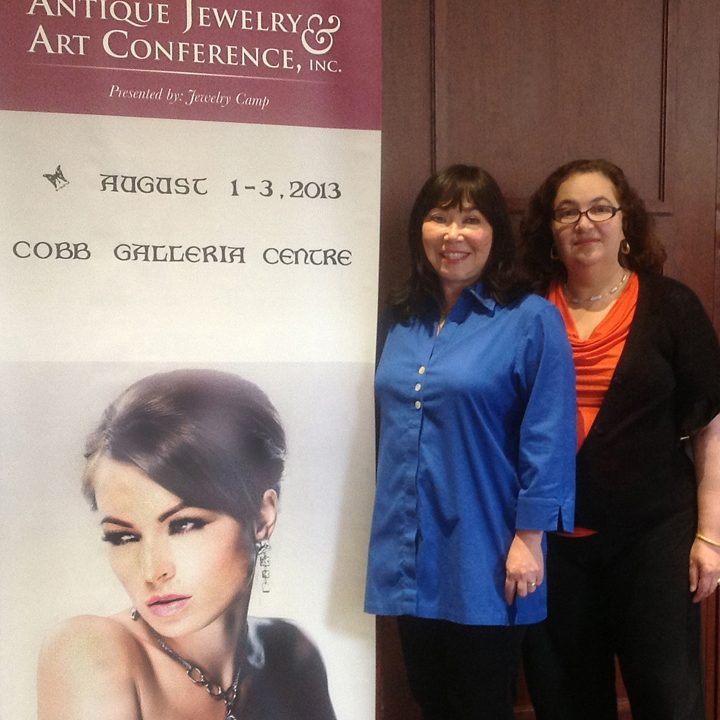 Among the experts presenting at this year’s conference were William Drucker of Drucker Antiques, who spoke on the Danish jewellery company Georg Jensen; author and museum consultant Janet Zapata, on Tiffany & Co. jewellery; Ezriel Rapaport of The Rapaport Group, on the secondary diamond market; Joseph DuMouchelle, on selling jewellery at auction; and Tina Joseff, on the costume jewellery designer Joseff of Hollywood. We also attended lectures on identifying Georgian and Victorian jewellery, famous women jewellers, Gothic Revival jewellery in France and England, 150 years of jewellery styles and internet research for identification and pricing, as well as an accelerated, hands-on assessment of antique jewellery.

Over its more than 100-year history, Georg Jensen jewellery has maintained value and is still handmade, said Drucker, a recognised authority on the company’s silver jewellery. Georg Jensen (1866–1935) was trained as a sculptor and began making jewellery in a small workshop in Copenhagen. He worked in art nouveau, a style that still influences the company’s designs. Other Jensen designers brought their own aesthetic and modern influences to their designs. One designer, Arno Malinowski, developed a metalsmithing technique using iron and silver during World War II, when metals were scarce. The product was similar to shakudo, a gold-copper alloy traditionally used in Japan to decorate sword fittings. Malinowski used this technique for only a short time, so these Georg Jensen pieces are rare and highly sought after.

Everything old is new again and diamonds are no exception. Ezriel Rapaport, director of global trading at the Rapaport Group, pointed out that more diamonds are actually coming out of the U.S. than South Africa today, thanks to the secondary market. This is being driven by “diamond recycling” on the part of the baby boomer generation. The generation is either selling off its diamonds or trading up. About $1.5 billion in diamonds are recycled annually, offering jewellers excellent profit margins. 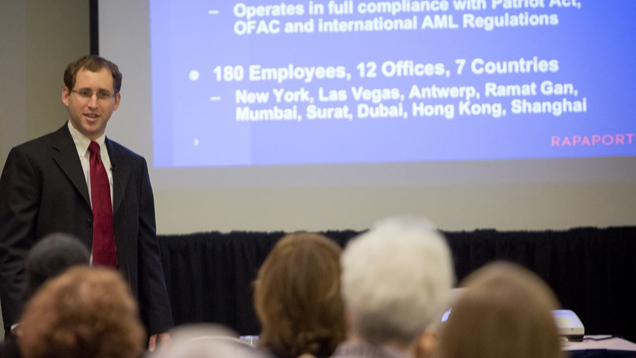 Ezriel Rapaport, director of global trading at the Rapaport Group, talks about the state of the secondary diamond market. Photo courtesy of ASK Media/The Antique Jewellery and Art Conference.

A Jeweller to the Stars

Tina Joseff, president and CEO of Joseff of Hollywood, gave an engrossing account of the company started by her father-in-law in 1928. Eugene Joseff worked in advertising in Chicago before moving to Los Angeles and starting a business designing and manufacturing jewellery for the burgeoning movie industry. He worked with famous costume designers, including Walter Plunkett (“Gone With the Wind” and “An American in Paris”) and Adrian Adolf Greenberg, also known as Adrian Gilbert (“The Wizard of Oz”). Joseff’s jewellery used silver, gold, platinum, plastic, wood and other materials, including natural gemstones. He also developed a secret plating technique so the jewellery wouldn’t reflect the camera lights.

Many of the big Hollywood stars were bejewelled in Joseff creations, both on screen and off. Some of the most memorable pieces include Vivien Leigh’s swag necklace in “Gone with the Wind” (1939), Shirley Temple’s crown and scepter in “The Little Princess” (1939) and Judy Garland’s lariat necklace in “Ziegfeld Follies” (1944). When Joseff died in a plane crash in 1948, his wife, Joan Castle Joseff, continued the business and created jewellery for the likes of Marilyn Monroe in “Gentlemen Prefer Blondes” (1953) and “Some Like It Hot” (1959), and Grace Kelly in “High Society” (1956). 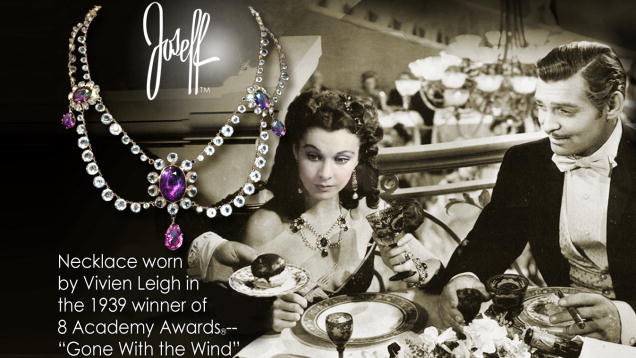 This still from the movie "Gone with the Wind," featuring Vivien Leigh and Clark Gable, is composited with the necklace worn by Leigh, which features Austrian amethysts and white sapphires set in sterling silver. Photo courtesy of Joseff-Hollywood. 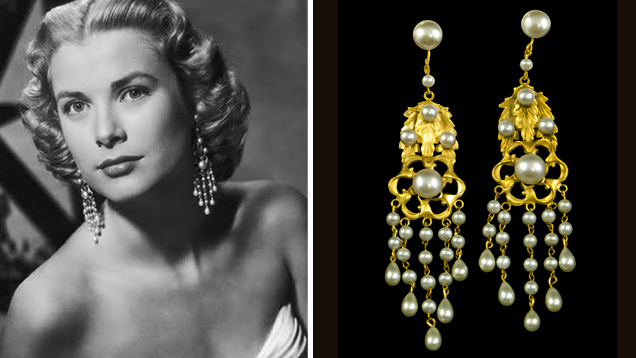 Actress Grace Kelly (left) wore faux pearl earrings (right) for the movie “High Society”. The piece was designed by Joseff of Hollywood, known at one time as the “Jeweller to the Stars”. Photos courtesy of Joseff-Hollywood.
Today, Joseff-Hollywood mostly produces precision investment castings for the aerospace industry, but the company still manufactures a line of retail costume jewellery using original findings purchased in mass quantities shortly before Joseff’s death. The vintage retail costume jewellery and studio pieces are still highly sought after by collectors.

Another session was led by Louis Scholz, a gemmologist and founder of Fine Jewellery by Louis, a wholesale antique jewellery company and Brixton & Gill English-made cufflinks. This hands-on session involved the lightning-fast examination of 25 jewellery items. Using only a loupe, with one minute per piece, participants determined each item’s age and gem and metal content and assessed its marks. The experience was humbling but beneficial, as purchasing estate jewellery often requires quick evaluation, along with a keen eye, experience and good instincts. 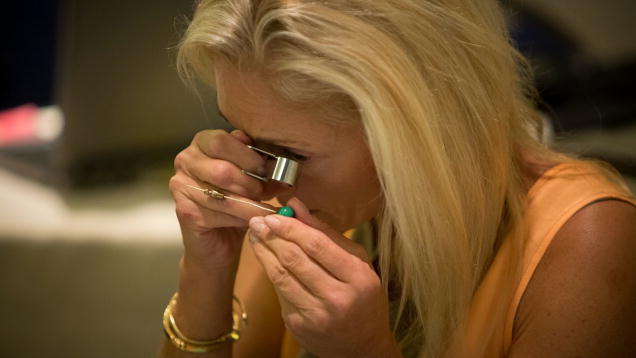