Emerald’s verdant color is a symbol of nature’s rebirth in spring, so it is appropriately named as the birthstone for those born in May. Colombian emeralds, found deep within the Cordillera mountains of the Andes, are some of the finest emeralds in the world. They are as lush as the rainforest, mountains and valleys where they have been concealed for millennia and sought for centuries.

Colombian emeralds are renowned for their vibrant green color, which comes from the element chromium, and gives them their highly prized hues. When these emeralds form as a trapiche crystal – a distinct pattern resembling a wheel with six spokes – they set the standard as some of the finest and most spectacular crystals unearthed. 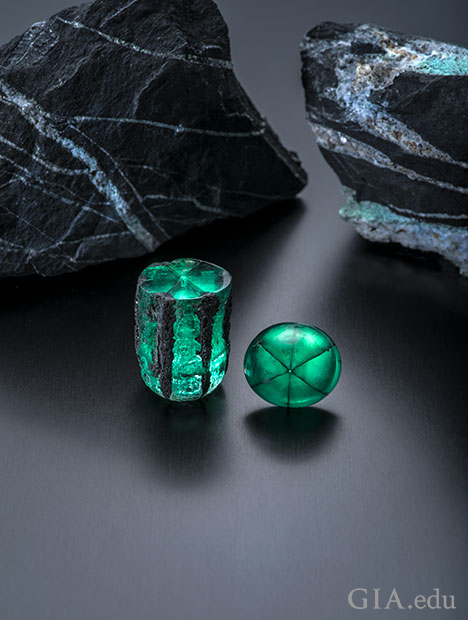 These trapiche emeralds are from the Penas Blancas mine, Colombia. The rough crystal is 58.83 ct and the large cabochon is 22.74 ct. Two carbonaceous shale rocks with quartz, pyrite, and the beginnings of emerald formation are shown in the background. Courtesy Jose Guillermo Ortiz. Photo by Robert Weldon/GIA

When emerald miners first discovered these patterned gems, they called them trapiche, the Spanish word for the multi-spoked cogwheels rotated by oxen tied to a yoke to grind cane sugar. They were first described in 1879 by French mineralogist Emile Bertrand at a meeting of the Société Géologique de France.

Trapiche emeralds are found in the black shale host rocks of just a few Colombian mines in the western belt of the Eastern Cordillera Basin. Their appearance consists of a central core, six arms and black shale dendrites – a crystalline, branching tree-like structure that forms between the arms and around the core. They are visible when the crystals are viewed perpendicular to the c-axis and are often cut as cabochons to accentuate the six partitions. 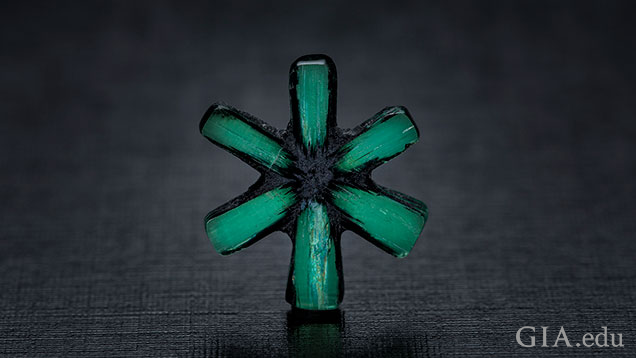 The carbonaceous material has been removed from the emerald trapiche rough to form a "star" pattern. Courtesy of Jeffery Bergman, Primagem. Photo by Robert Weldon/GIA

Trapiche emeralds form in the same hydrothermal conditions as other Colombian emeralds, but their texture results from a complex growth history characterized by variations of fluid pressure in the structural geology of the deposits. The crystal’s hexagonal symmetry determines the number and the development of growth sectors, giving rise to the six arms.

The arms of trapiche gems remain fixed when the gem material or light source is moved. Its six arms can intersect in the middle or radiate from a central hexagonal core. The central core of a trapiche can be open or closed and taper from small to large within a single crystal, depending on how it formed.

The six-spoke pattern in trapiche is not asterism, which refers to a gemstone phenomenon brought about by the way light interacts with oriented needle-like inclusions in the gem. The arms of asteriated gems appear to glide across the surface when the light source or gem material is moved, but the arms of trapiche gems stay in place. [Note: There are only a few known emeralds that exhibit actual asterism.] 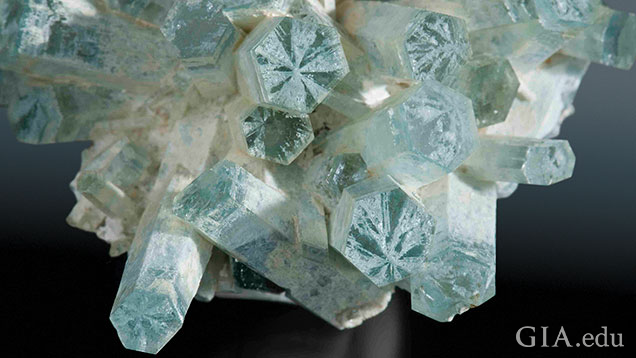 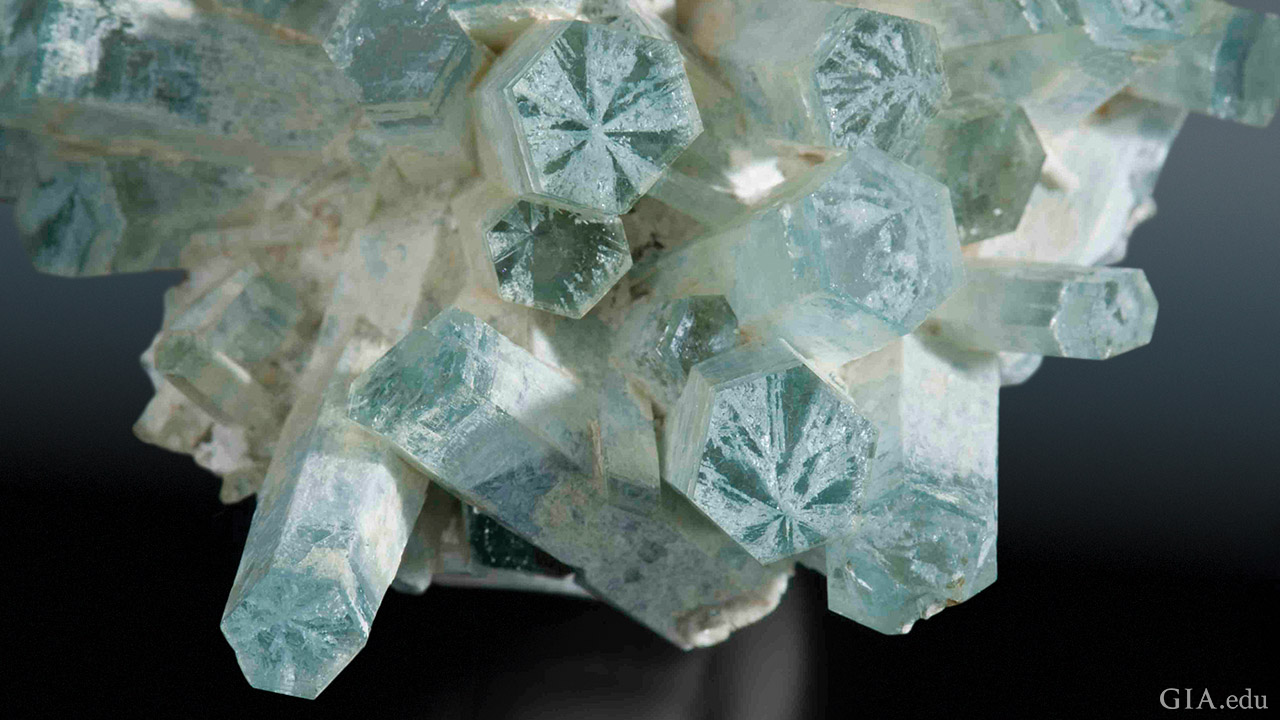 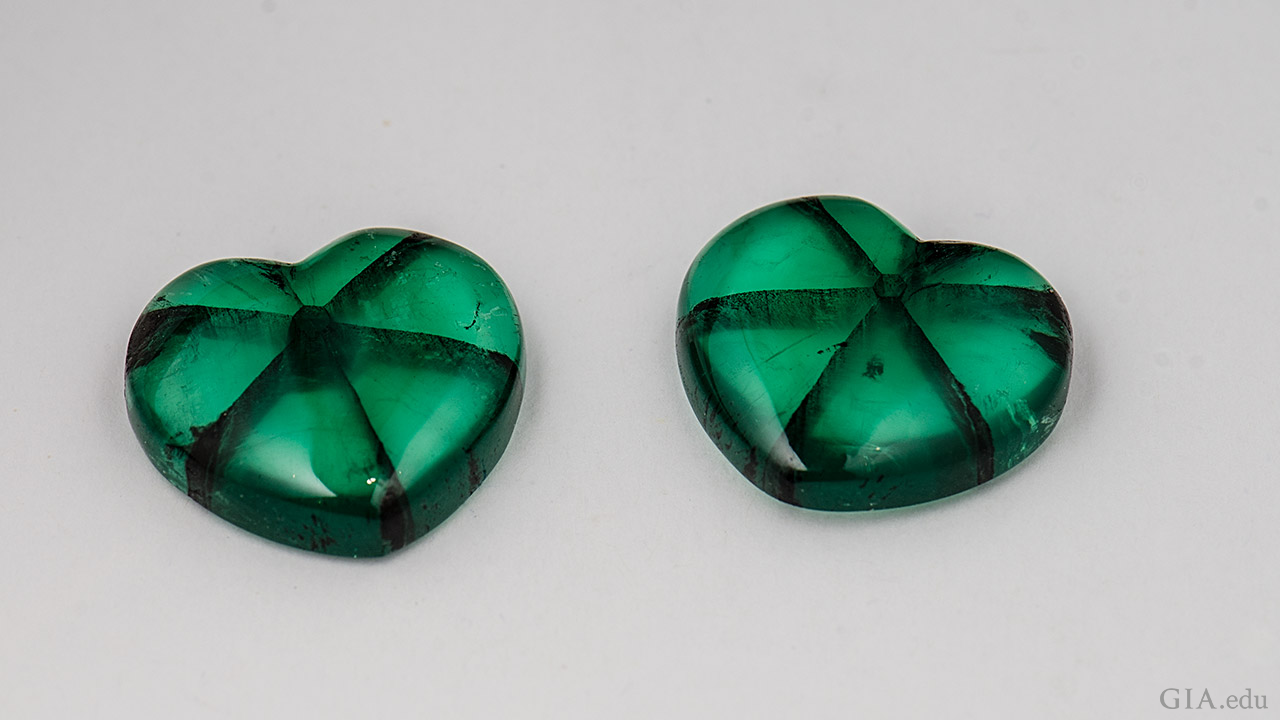 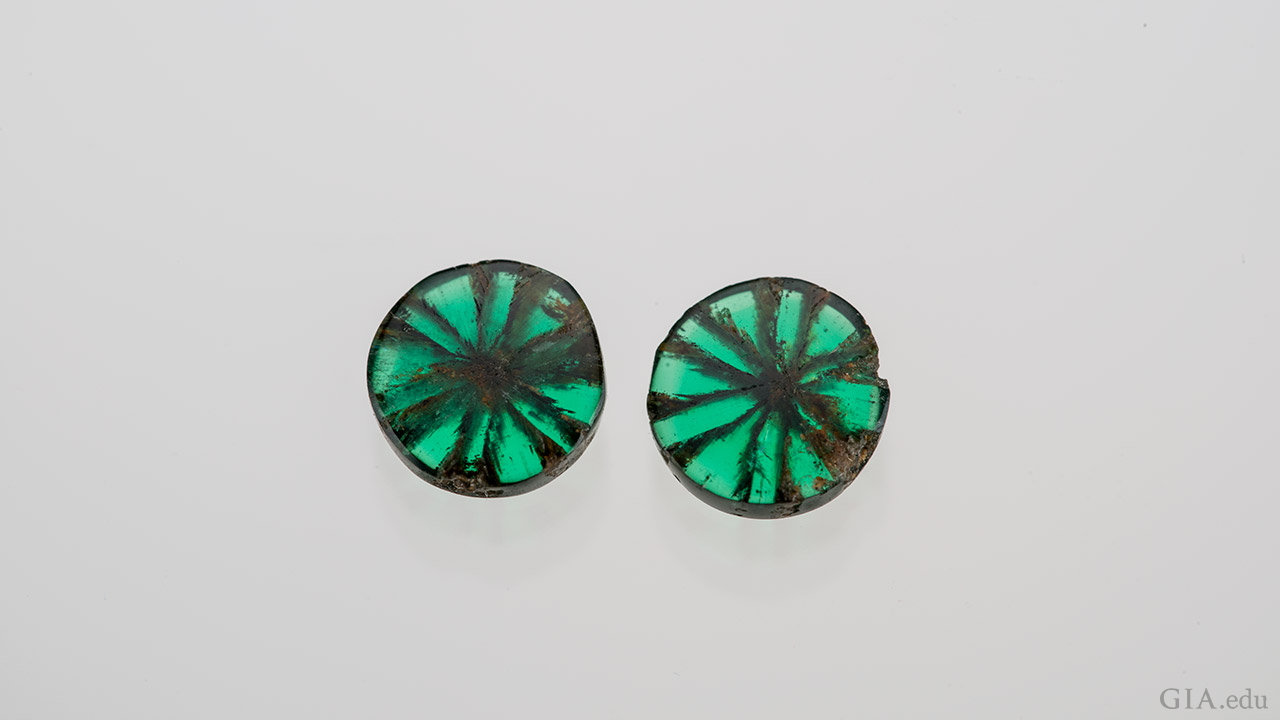 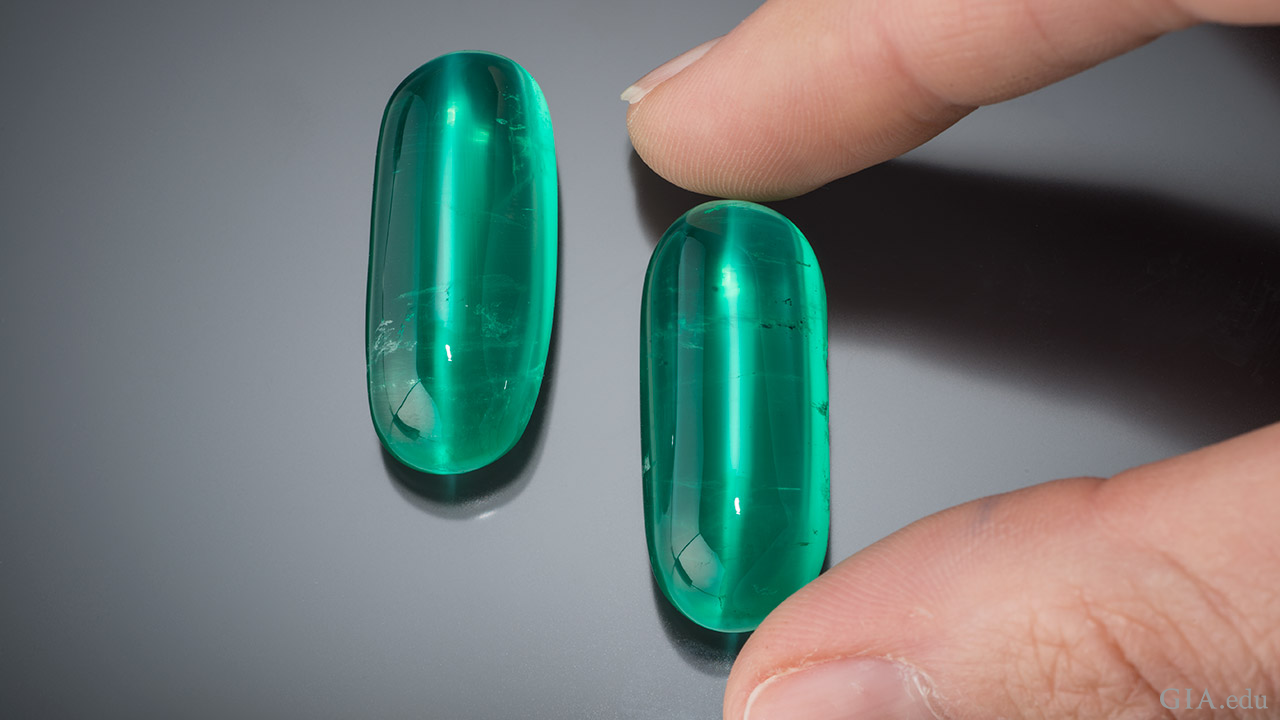 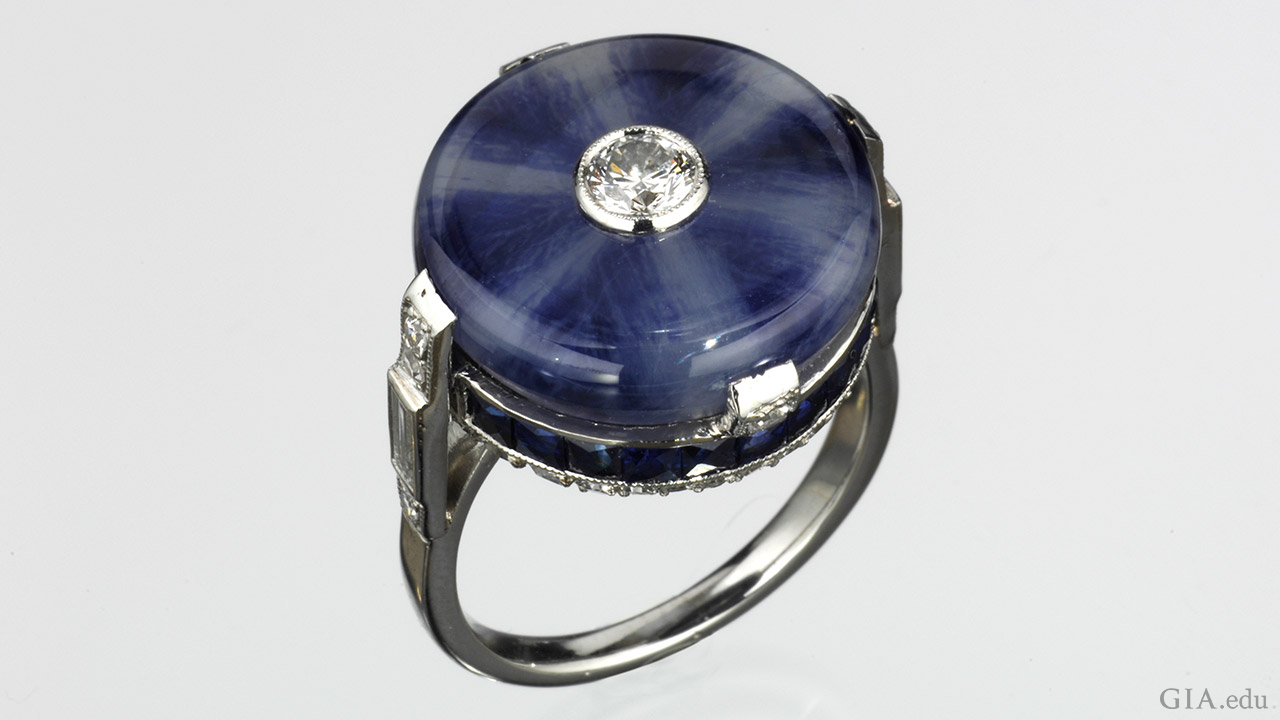 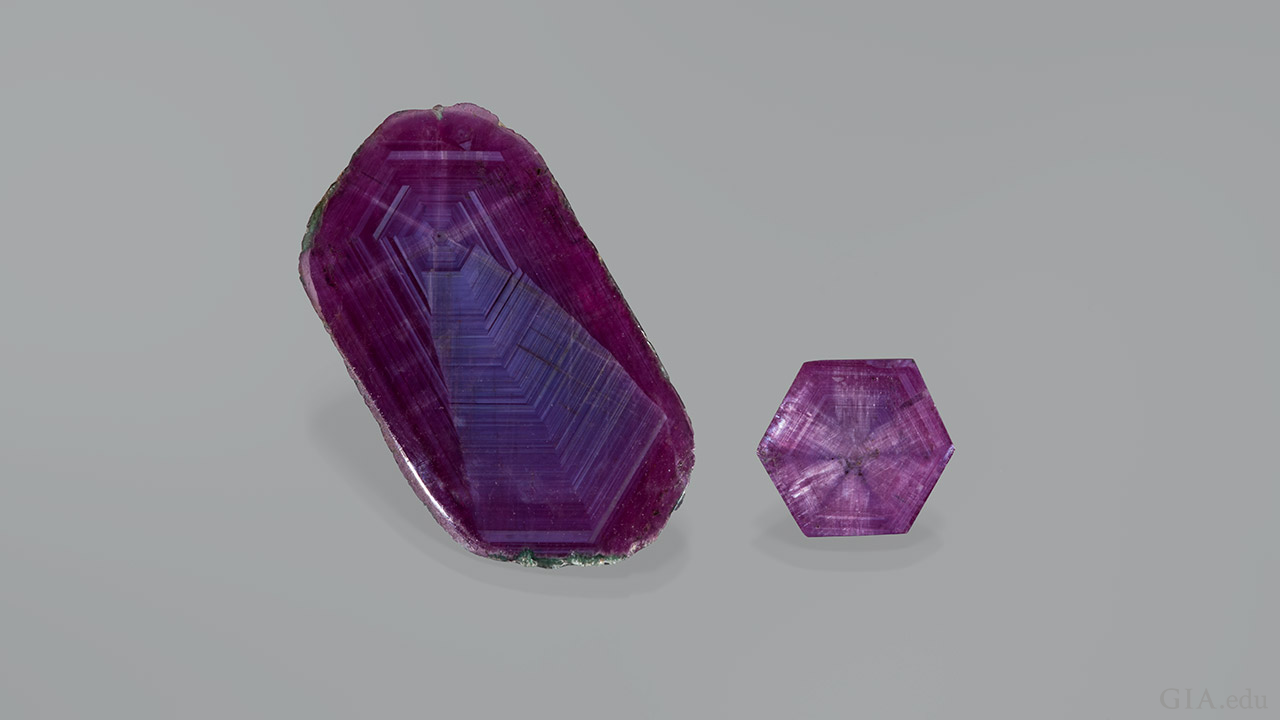 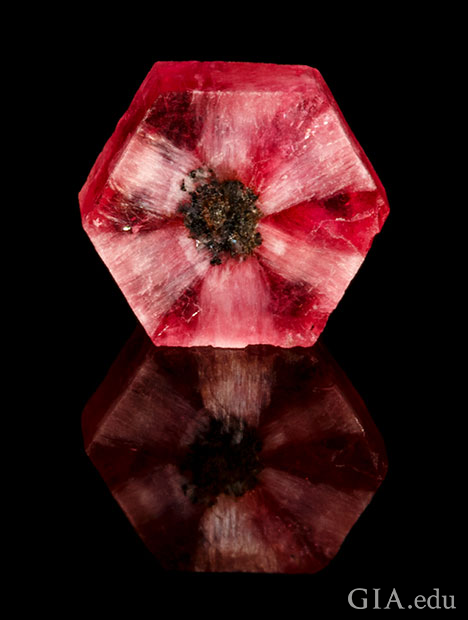 The Many Other species of Trapiche Gems

Trapiche emeralds were first sent to GIA for analysis in the mid-1960s. Since then, the trapiche six-arm texture or pattern has been observed in a few other gemstones, most notably in sapphire and ruby.

Trapiche rubies from Mong Hsu, Myanmar were first documented by GIA in 1995 and have since been found in Guinea, Kashmir, Pakistan, Nepal, Sierra Leone and Tajikistan. Trapiche sapphires first appeared on the gem market in early 1996, when samples were offered in Basel by a Berlin gem dealer. Trapiche sapphires have been found primarily in Australian, Cambodia, China, France, Kenya, Madagascar, Nepal, Sri Lanka and Tanzania. 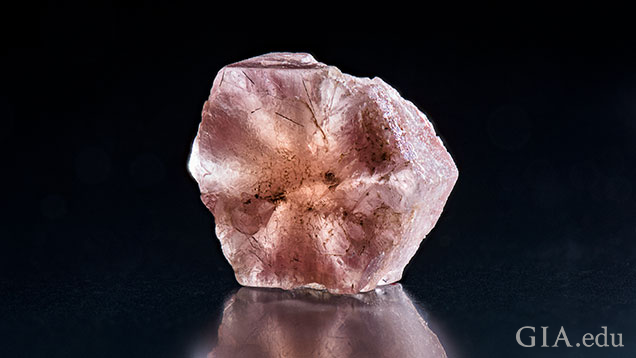 Pezzottaite is a rare gem material and extremely rare in trapiche formation. This trapiche pezzottaite is 2.33 cts. Courtesy of John I. Koivula. Photo by Kevin Schumacher/GIA 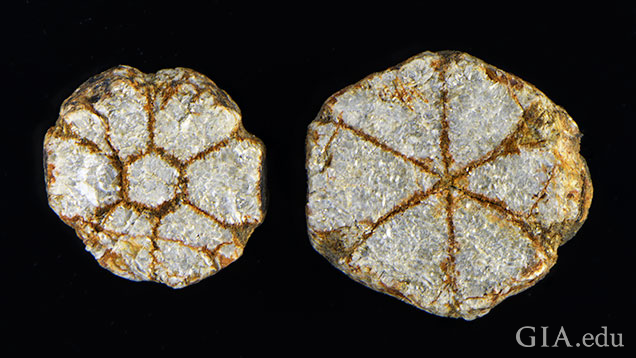 These muscovite trapiches, or “cherry blossom stones,” formed through alteration of complex indialite-cordierite intergrowths. The sample on the left has an open center and the one on the right exhibits a closed center. Photo by Nathan Renfro/GIA

Proposes a model for trapiche emerald formation based on petrographic, spectroscopic, and chemical examination.

A rare mineral acquired along the Thai-Myanmar border exhibits the distinctive six-spoke pattern associated with trapiche.

Reports on exceptionally rare trapiche-patterned rhodochrosite from the famed Capillitas mine in Argentina.

A rare Tasmanian trapiche-type sapphire, found during a field expedition, is examined.

Learn about the gemstones that make up these floral beauties by taking Graduate Colored Gemstones.