Since the first enigmatic six-spoked emeralds were sent to GIA in the mid-1960s for analysis (H.L. McKague, “Trapiche emeralds from Colombia,” Fall 1964 G&G, pp. 210–213, 223), the family of trapiche-type gem minerals has grown to include a variety of species and morphologies. One of the latest mineral varieties to exhibit the rare trapiche form is a relatively new and rare mineral itself: pezzottaite.

Following its appearance at the 2003 gem shows in Tucson, pezzottaite has quickly become an item coveted by gem and mineral collectors around the world. A member of the beryl group and with trigonal symmetry (the beryl species has hexagonal symmetry), it was approved by the International Mineralogical Association in September 2003 as a unique species and named after mineralogist Dr. Frederico Pezzotta (see B.M. Laurs et al., “Pezzottaite from Ambatovita, Madagascar: A new gem mineral,” Winter 2003 G&G, pp. 284–301).

In 2004, while working in the gem markets of Mae Sai and Mae Sot along the border of Thailand and Myanmar, Elaine Rohrbach of Gem-Fare obtained a small collection of pale pink trapiche crystals and crystal fragments reported to be of Burmese origin. Laboratory analysis later proved these crystals to be the cesium-containing mineral pezzottaite (previously confirmed localities include Madagascar and Afghanistan). 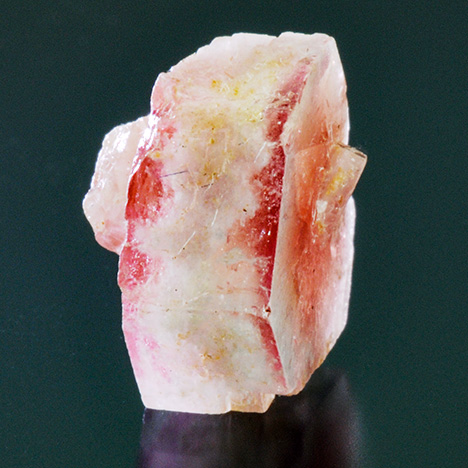 Figure 2. Another well-developed, doubly terminated pezzottaite crystal from the same locality, weighing 6.17 ct and measuring 11.19 × 10.71 × 8.61 mm, has separate crystals growing at random angles on each pinacoid face. Each of these smaller crystals also exhibits trapiche growth. The white trapiche growth reaches all six prism faces in both of the tabular crystals, as well as those faces on the secondary growth crystals. Photo by Elise A. Skalwold.

A doubly terminated, well-developed crystal obtained by one of the authors (JIK) exhibits the tabular prismatic habit characteristic of the species, but with a complete six-spoke trapiche structure that is clearly visible in both reflected and transmitted light (figure 1). Another doubly terminated crystal obtained by author EAS from the same parcel shows secondary crystals growing out of each pinacoid face, each of which are also trapiche crystals (figure 2). Similar to trapiche crystals of other mineral species, each of the spokes radiates from the central c-axis toward the prism faces and in a plane parallel to the basal pinacoid. Exploring the former crystal’s inner world revealed not only the details of the white spokes and a spray of golden brown needles and eye-visible black needles, but also a delightful surprise: minute euhedral blue crystals (figures 3 and 4). Unfortunately, the black needles were not identifiable despite their distinct Raman spectrum. Due to their depth within the host, the brown needles and blue crystals remain mysteries as well. Let this be a lesson that nondestructive testing cannot always provide answers, but we can be content with exploring the beauty of the micro-world while leaving some mysteries for the future. 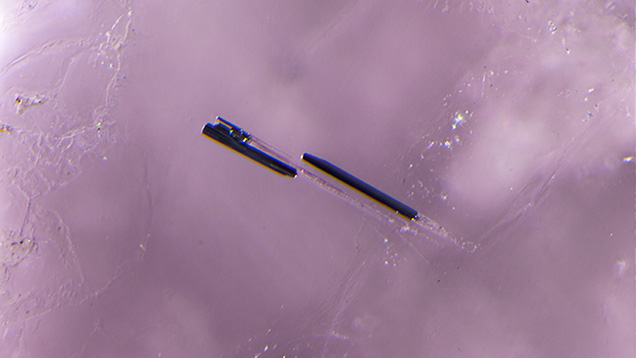 Figure 3. Eye-visible dark needles were seen throughout the pezzottaite crystal with diffused transmitted illumination. Despite a clear Raman signal, the features could not be conclusively identified. Photomicrograph by Nathan Renfro; field of view 1.10 mm. 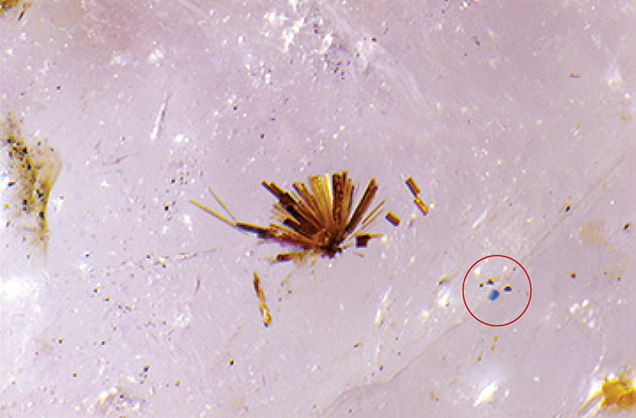 Figure 4. Using diffused transmitted and oblique fiber-optic illumination, a golden-brown spray of needles is shown deep in the crystal, along with a bright blue crystal to its right. Their depth precluded analysis by Raman spectroscopy. Photomicrograph by Nathan Renfro; field of view 0.91 mm.
About the Authors

Elise A. Skalwold, an accredited senior gemologist of the Accredited Gemologists Association (AGA), is involved in curating and research at Cornell University in Ithaca, New York. John I. Koivula is the analytical microscopist at GIA in Carlsbad, California.

Pezzottaite, ideally Cs(Be2Li)Al2Si6O18, is a new gem mineral that is the Cs,Li–rich member of the beryl group.