Trapiche and trapiche-type minerals are treasured for their beauty and unique patterns. The six-rayed spoke patterns occur in different minerals but are best known in emeralds. During a GIA field expedition to the Australian island of Tasmania, author VP was able to mine several sapphires (figure 1), including a black star, some small blue samples, and a 2.73 ct blue sapphire that showed a fixed six-ray pattern. Trapiche-type stones are found in almost all basalt-related sapphire fields, but they are considered exceptionally rare in Tasmania (B. Sweeney, “Interesting gems from north-east Tasmania,” Australian Gemmologist, Vol. 19, No. 6, 1996, pp. 264–267).

The trapiche-patterned stone had a dark blue bodycolor and was translucent to opaque. Many inclusions were visible, as were iron-stained fractures and clouds of particles. Hexagonal growth and color zones could also be seen. The core of the sample appeared colorless. The trapiche pattern was expressed as a hexagonal core with six radiating arms (figure 2). These white reflective features stood out against the blue bodycolor. The stone weighed 2.54 ct after we opened a polished window, and it measured approximately 6.93 × 8.20 × 3.00 mm after fabrication. 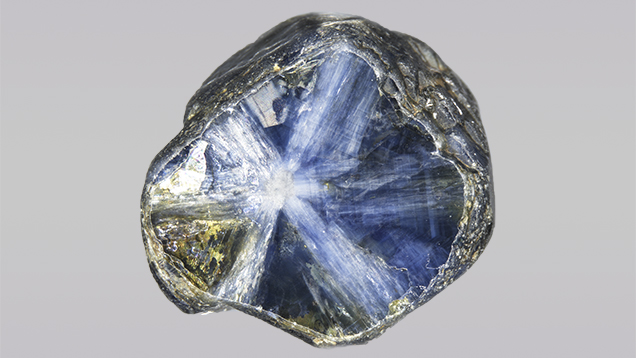 Figure 2. The polished section of the trapiche-type sample, as seen with fiber-optic illumination. The central white core and the six whitish particle-rich arms separated by blue areas are clearly visible. Photo by Victoria Raynaud.

The relationship of the trapiche arms to the color zoning is important for correctly identifying a sample as “trapiche” or “trapiche-type.” In this case, it was obvious that the rays were perpendicular to the hexagonal color and growth zoning, and that the intersections were not located at the corners of the hexagonal pattern.

According to the recent literature, this pattern would not qualify as true trapiche, as seen in Muzo emeralds or some Mong Hsu rubies (G. Giuliani and I. Pignatelli, “‘Trapiche’ vs ‘Trapiche-like’ textures in minerals,” InColor, Vol. 31, 2016, pp. 45–46). True trapiche minerals have equivalent, crystallographic sectors divided by heavily included zones, a pattern expressed as arms intersecting the growth patterns at the junctions (figure 3, left). In the Tasmanian sapphire, the included zones were perpendicular to the growth zones and did not divide the gem into crystallographic sectors (see figure 3, right). Thus, it was a “trapiche-like” mineral.

The higher concentration of certain elements (V, Zr, Nb, and Ta) was most likely due to the presence of micro­inclusions. Ti was extremely low in the core, where there was no blue color; higher Ti concentrations in the other areas explained the blue color. The variation within the arms and the blue area may be explained by growth + color zoning, although the influence of Ti-rich particles should not be excluded. The Fe concentrations were probably caused by a combination of increased particle density and internal growth variations. It is notable, but not unexpected, that this natural trapiche-type sapphire contained some Be, albeit in very low quantities (V. Pardieu, “Blue sapphires and beryllium: An unfinished world quest,” InColor, Vol. 23, 2013, pp. 36–43). The Be concentration was highest in the core, where the particle density was highest and the blue color was absent.

While trapiche-type sapphires are not particularly rare, it is unusual to find them in Tasmania. This sample has additional scientific value because it was mined by a field gemologist during a field expedition, giving it an extremely reliable origin.

Wim Vertriest is a trainee in the field gemology department, Supharart Sangsawong is a scientist, and Vincent Pardieu is senior manager of field gemology at GIA in Bangkok.