A tropical paradise conjures up images of swaying palm trees, the soothing sound of ocean waves and intoxicating floral fragrances. If this vacation is not on your agenda, you can escape to a warm-water paradise in your mind with these jewels that formed in the sea, are inspired by marine life and evoke the ocean’s essence.

Gems from the Sea

The ocean provides us with a variety of pearls, shells and coral – all top-of-mind when we think of gems from the sea, whether natural or cultured. 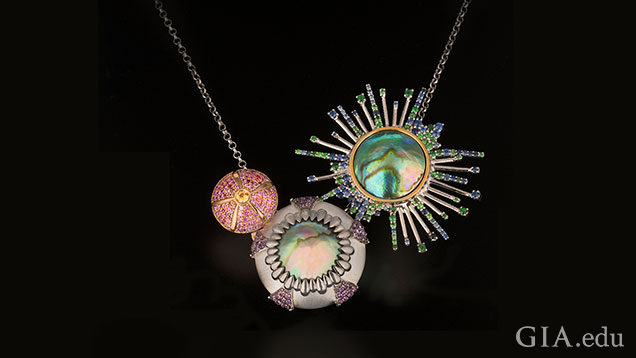 Urchin necklace by Evelyn Huang features two Eyris® pearls accented with color sapphires, garnets and amethysts. The Eyris® cultured blister pearl is a product of the Paua abalone shell, which is native to New Zealand. Photo by Orasa Weldon/GIA

The Pantone Color Institute named “Living Coral” its color of the year for 2019, reminding us that coral is a living member of the animal world and contributes to the health of the ocean ecosystem. Coral is a protected species and subject to regulation in the United States, requiring declaration and licensing permits from the U.S. Fish & Wildlife Service. Black coral, found in Hawaii, is the only coral that can be legally harvested in the U.S. All other corals are imported, usually from China. Gem-quality coral is primarily found in the Mediterranean and in the Pacific Ocean off the coasts of Japan and Taiwan. 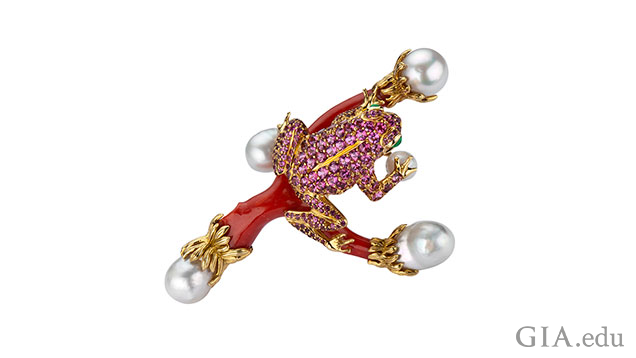 “Tree Toad,” composed of pink tourmaline on a branch of coral is accented with South Sea cultured pearls and enameling. Designed by Tony Duquette and Hutton Wilkinson, courtesy of a private collector. Photo by Orasa Weldon/GIA

The warm waters of Australia, Indonesia, the Philippines and Myanmar (formerly Burma) are the pearling regions and natural home of Pinctada maxima, a large bivalve mollusk and the source of South Sea cultured pearls. South Sea pearls are known for their thick nacre, satiny luster, large size, and subtle array of colors. The silver-lipped P. maxima produces white to silver pearls and the gold-lipped P. maxima produces mostly yellow to orangy yellow pearls, called “golden” in the trade.

French Polynesia is the only area with optimal conditions for the subspecies Pinctada margaritifera cumingii, the black-lipped mollusk used to culture black Tahitian pearls. Historically, black pearls were found in North America in the Sea of Cortez in the Gulf of California in pre-Columbian times. La Paz became the main commercial center for pearls in the 16th century. 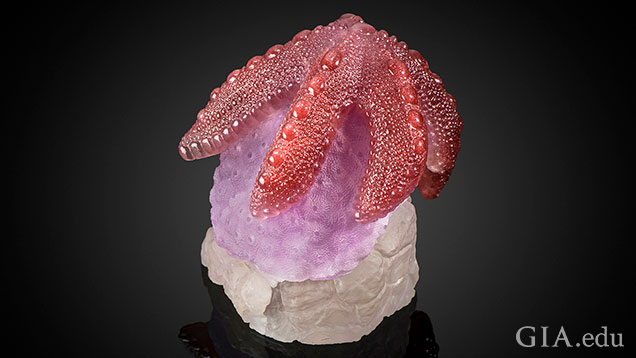 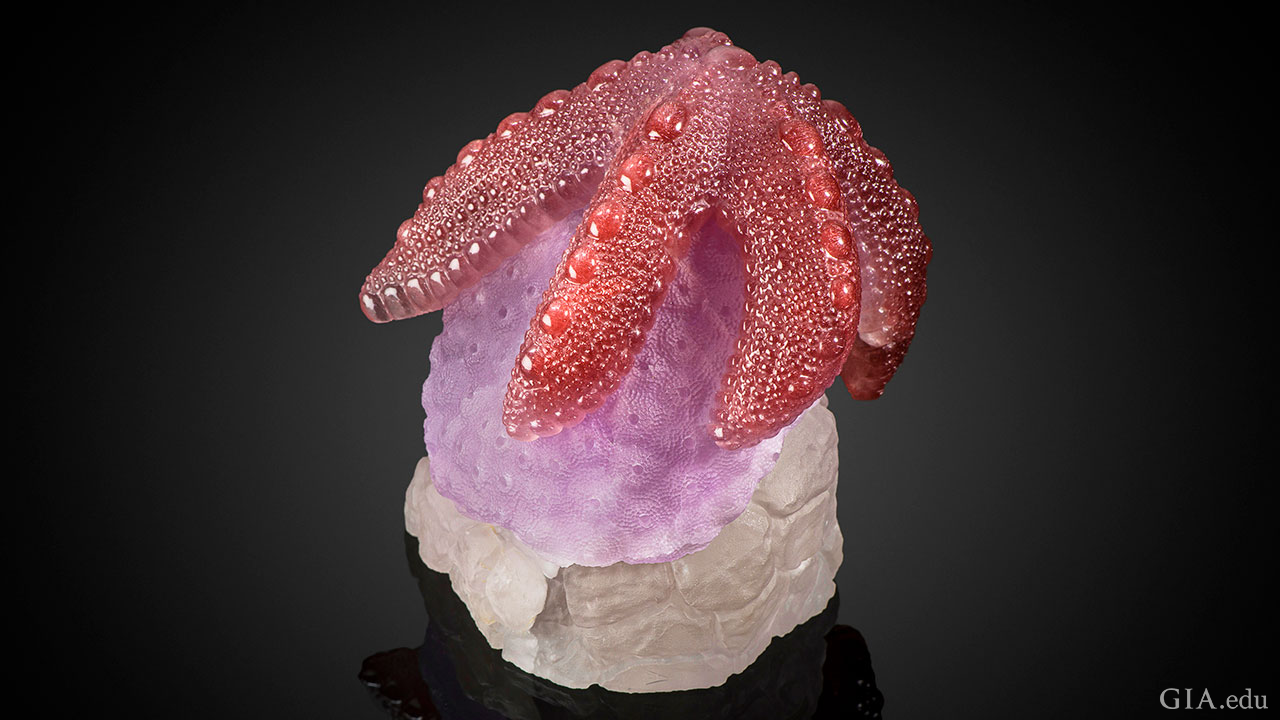 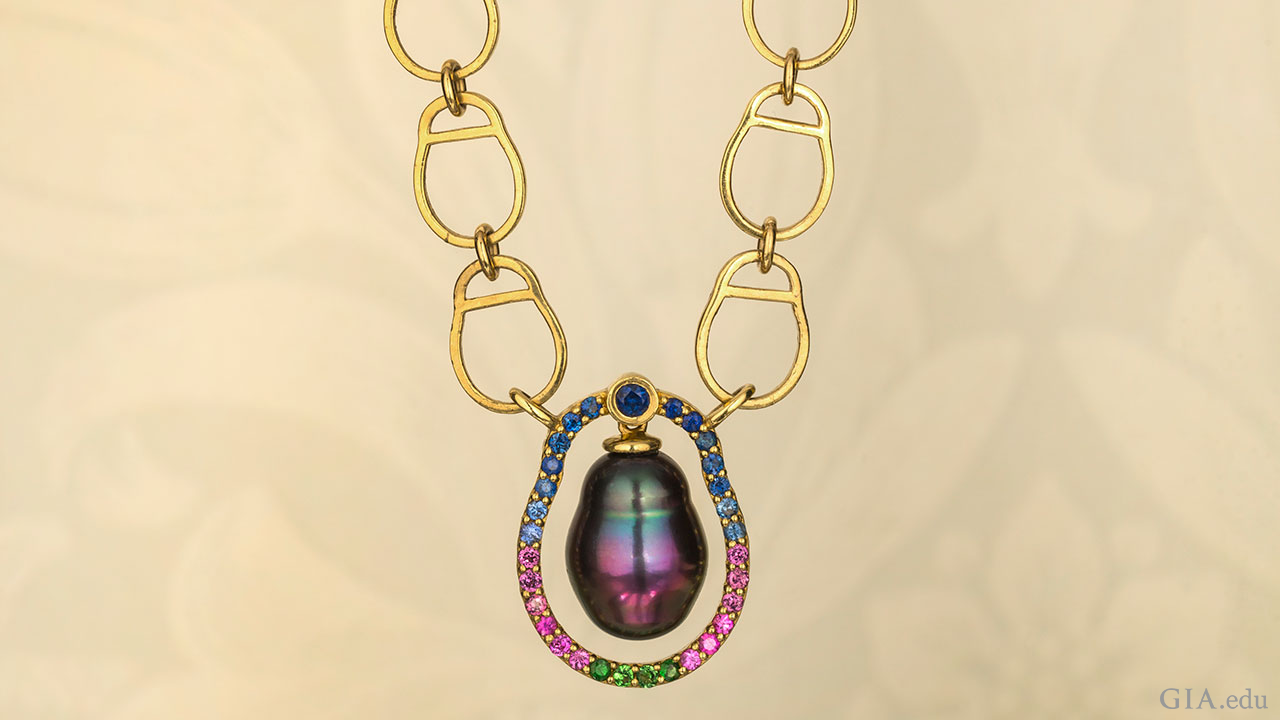 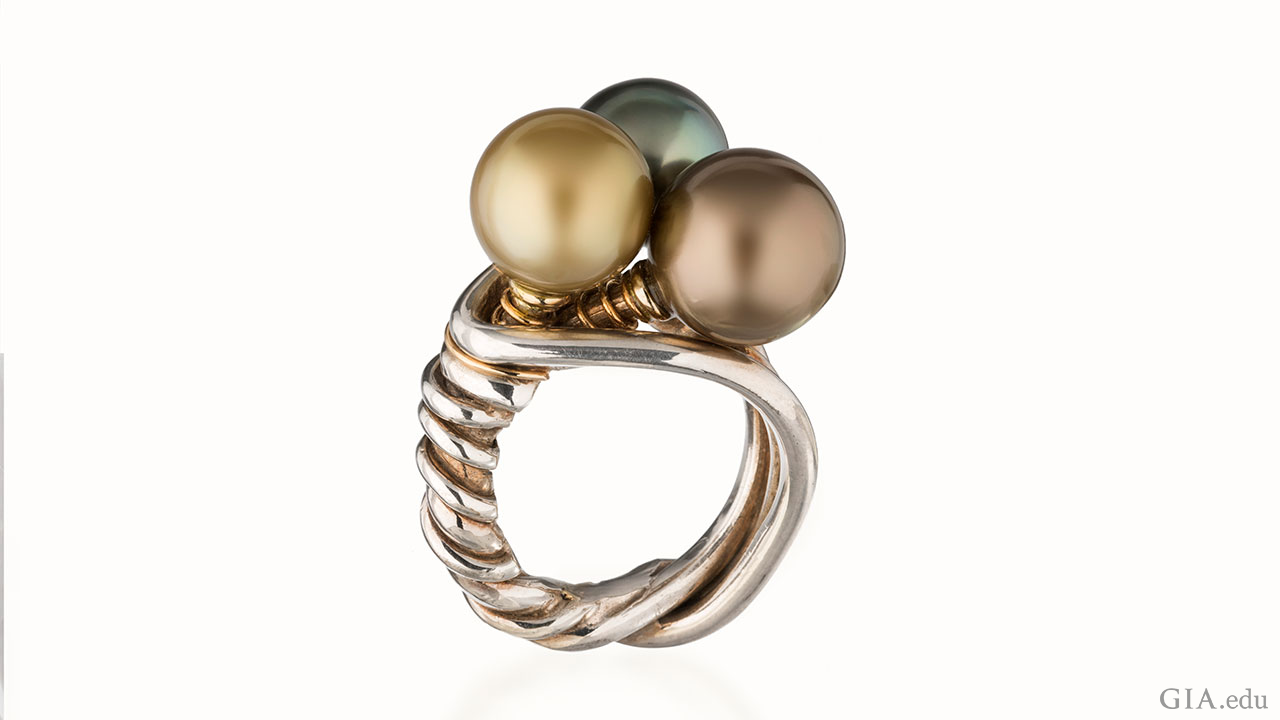 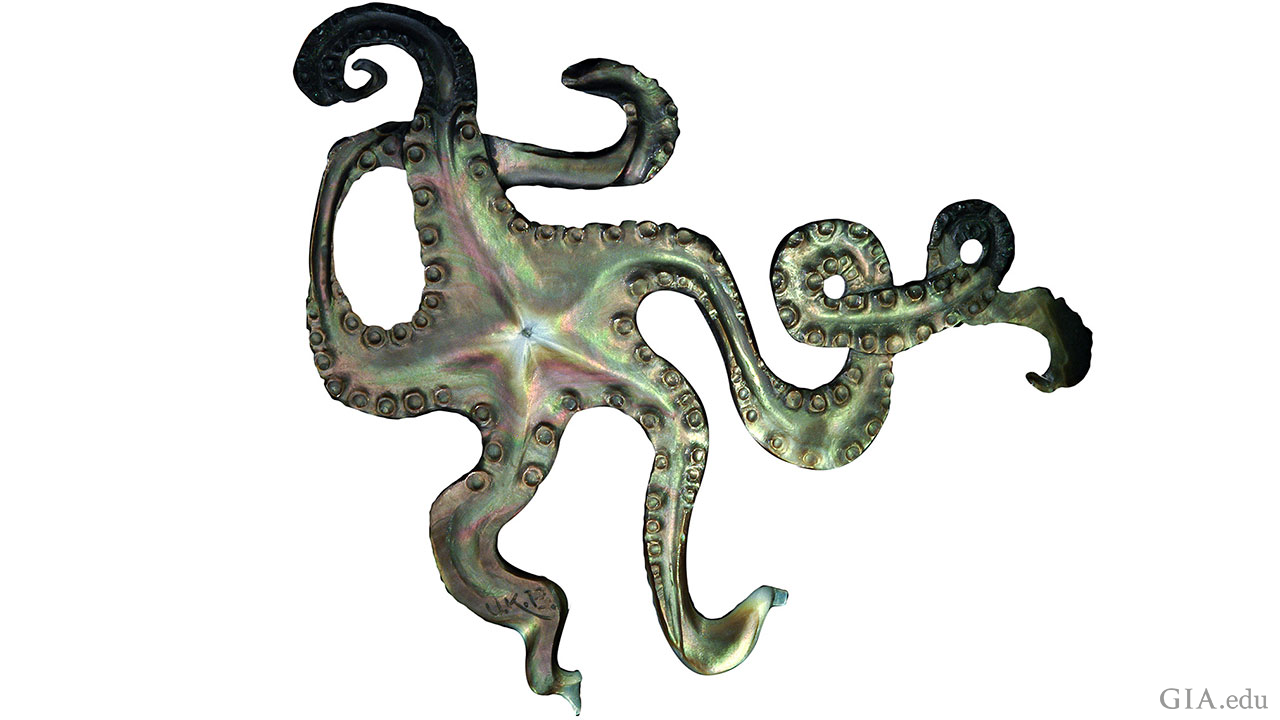 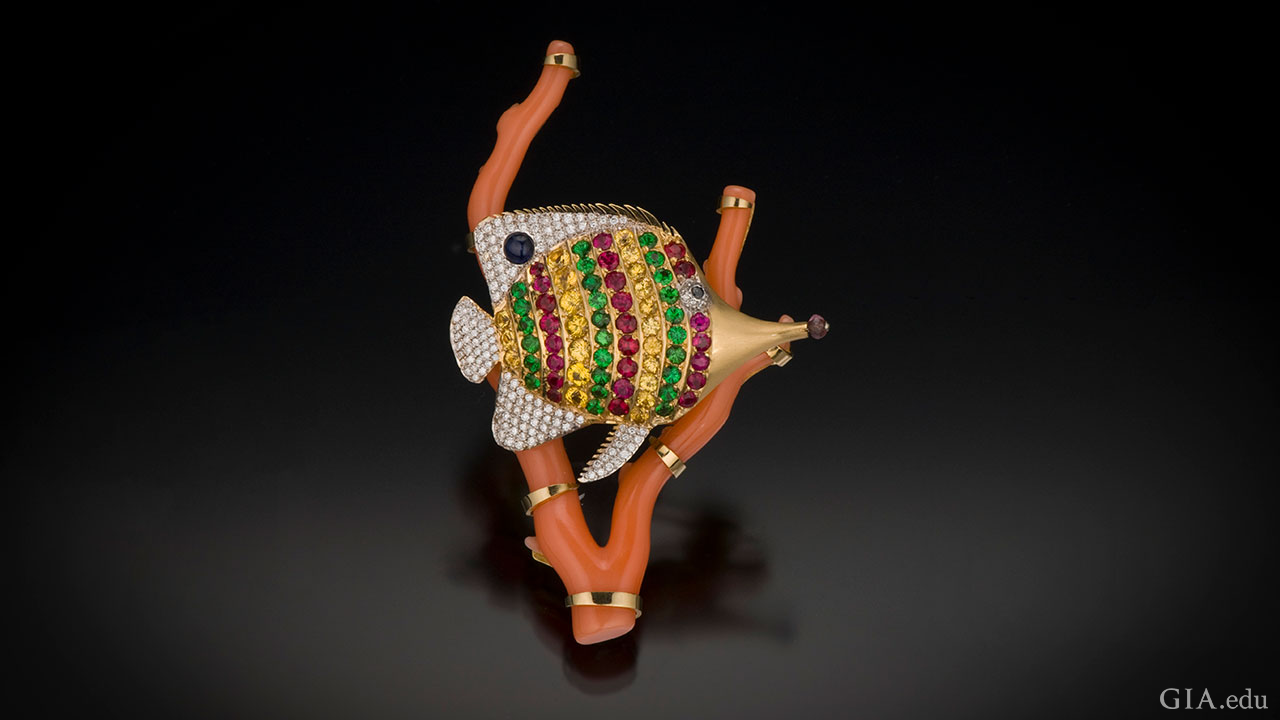 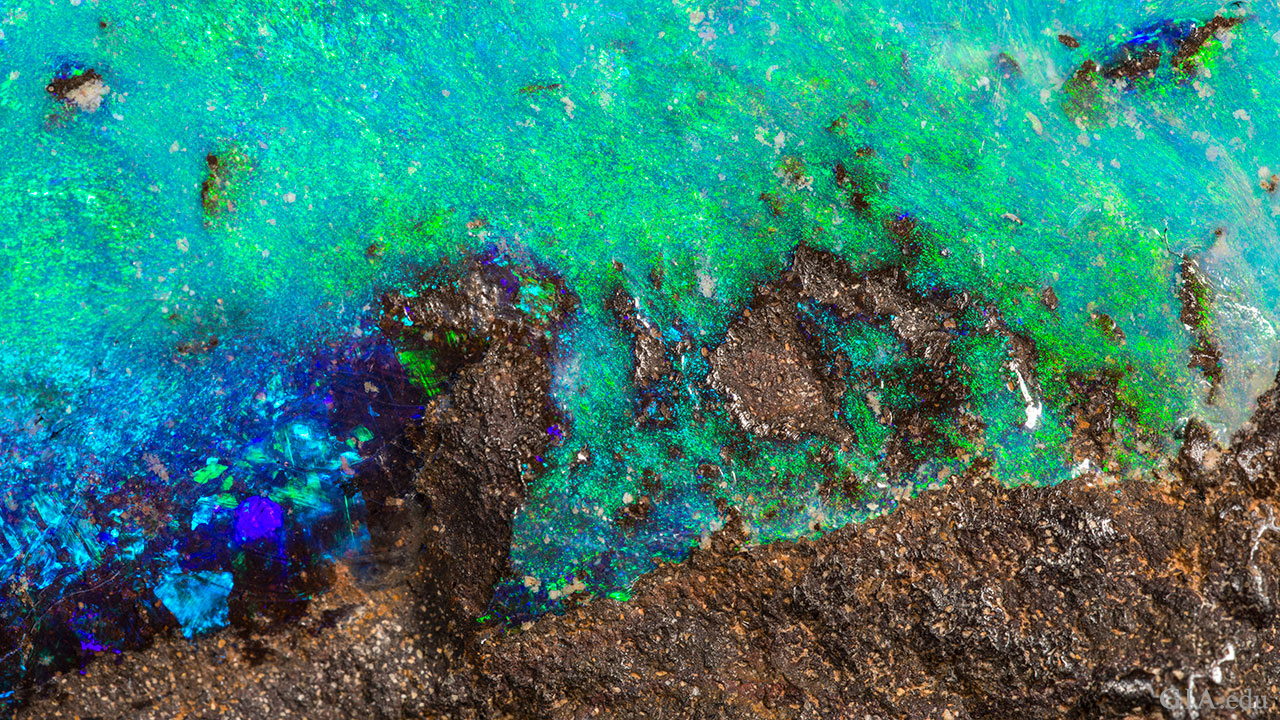 Eyris® cultured blue pearls of the abalone Haliotis iris or Paua shell native to New Zealand, form as a blister – a dome shape inside the abalone shell. It takes up to three years to culture each blister pearl. With an overall success rate of 25 percent, these cultured pearls are truly in a class of their own. With iridescent colors shimmering like the ocean waves, the pearls are sometimes tinged by rare blue colors. Their mesmerizing colors can range from blues and greens, to golds and pink, with some having splashes of red and violet.

The colors, textures and movements of sea life are fascinating to observe, especially when depicted as jewelry or sculptures. 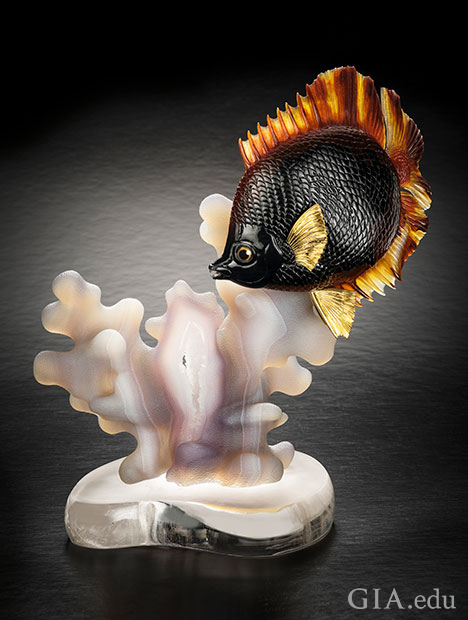 The intricate patterns and romance of sea creatures, fauna and flora is masterfully rendered by gemstone carvers Patrick Dreher and his father, the late Gerd Dreher. Their dynasty has passed techniques from father to son for 13 generations over a period of five centuries. The Dreher carvings have an unsurpassed quality of realism, due in part to the advancement of diamond-sintered tools, and in greater part to their devoted observation of their subject’s nature.

This diamond-studded enameled sailfish brooch by Tiffany & Co. recalls the 1930s, an era when sportfishing became a favorite pursuit of the elite in the U.S. Courtesy of Vartanian & Sons. Photo by Robert Weldon/GIA

Warm, tropical waters are known for colorful sea life and enameling is a metal technique that offers a great opportunity to add color to a design. Louis Comfort Tiffany began exploring jewelry making and enameling, a process in which glass is fused to metal, in the early 1900s. The green and blue sailfish brooch by Tiffany & Co. recalls the 1930s when sportfishing was popular among the elite in the U.S.

Gems that Evoke the Sea

There are several gem materials whose colors remind of us the sea, and jewelry designers and gem carvers take advantage of them to create ocean-inspired pieces.

Appearing as though it was an ocean wave frozen in time, this understated 54 ct polished slice of blue papagoite overlaid by layers of quartz evokes an ocean wave. Courtesy of Rare Earth Mining, Bill Heher. Photo by Robert Weldon/GIA

Discovered in 1960 in the hot, arid desert in Ajo, Arizona, papagoite is a rare cyclosilicate mineral. It was named after the Sand Papago people who inhabit the area. This is the only known source in the United States, although worldwide it is also found in South Africa and Namibia. Its bright blue color is its most notable characteristic, and it is used as a gemstone. 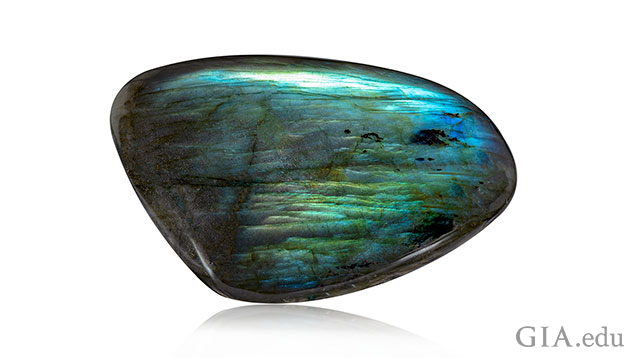 This piece of polished labradorite shows great labradorescence and the shifting blue and gray colors mimic the ebb and flow of the ocean. Gift of Carol and Larry Greenfield. Photo by Orasa Weldon/GIA

Labradorite lends itself to interpretation by the jewelry artist. Its shifting blue and gray colors mimic the ebb and flow of the ocean. Because labradorite is a plagioclase feldspar, it can form fine, microscopic, intergrown layers of albite and other plagioclase feldspars. When light hits the layers, the light waves interfere with each other, creating bands of shimmering spectral color, typically blues and greens. This phenomenon is called labradorescence, named after the mineral that displays it.

Boulder opals are mined from large ironstone boulders under the ground. Thin veins of colorful opal forms in cracks and fissures in these boulders. Because these veins of color are so thin, opal cutters need to leave the ironstone on the back of the opal to form a full-sized stone. The thin layer of opal in boulder opals can display any color of the spectrum in a beautiful play-of-color.

A tropical island getaway may only be a daydream, but you can treat yourself with ocean-inspired jewelry whenever you desire.