Following the charts for the micro-features of emerald and sapphire—published in Winter 2016 and Summer 2017, respectively—this chart on ruby rounds out G&G’s series on inclusions in the “Big Three” colored stones. Rubies (see above) have long been one of the top gems in the trade, commanding premium prices. Historically, their popularity has been critical to the development of color and clarity treatments (including heating and dyeing, and now more recently introduced processes) and synthetic gems. In the early 1900s, over five million carats of synthetic ruby were produced annually by the flame-fusion, or Verneuil, method (Hughes, 2017). 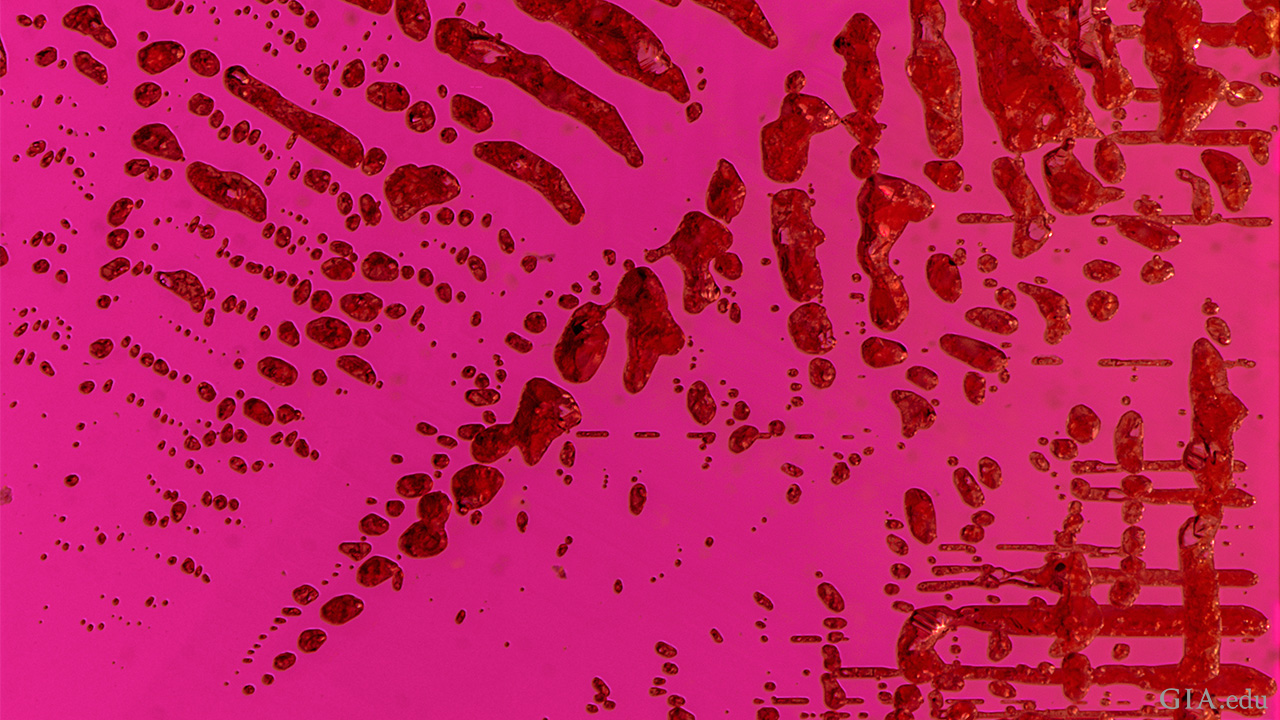 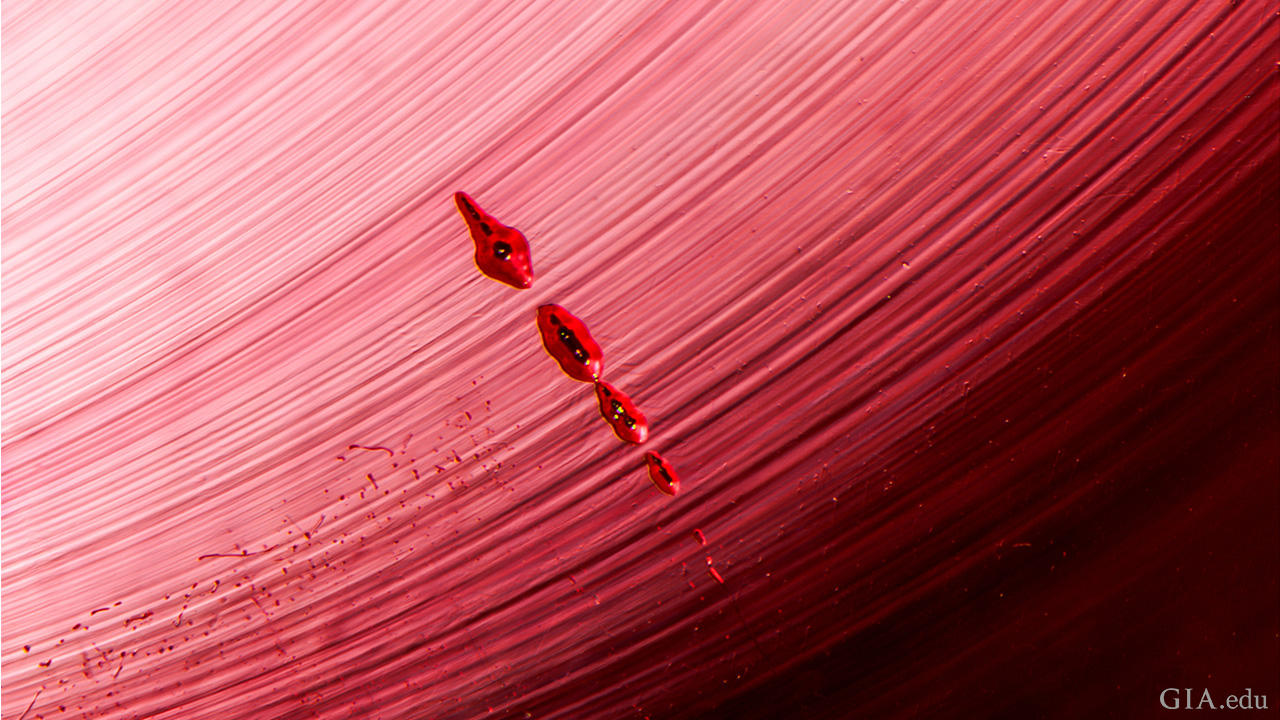 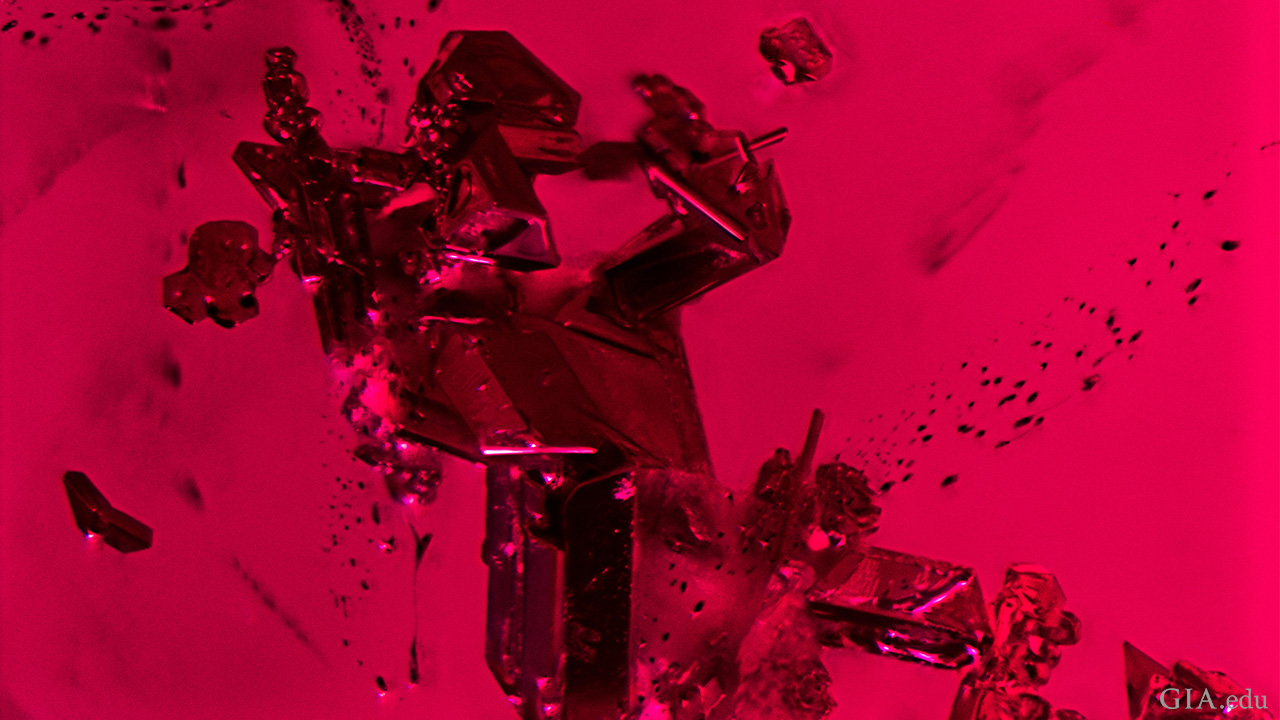 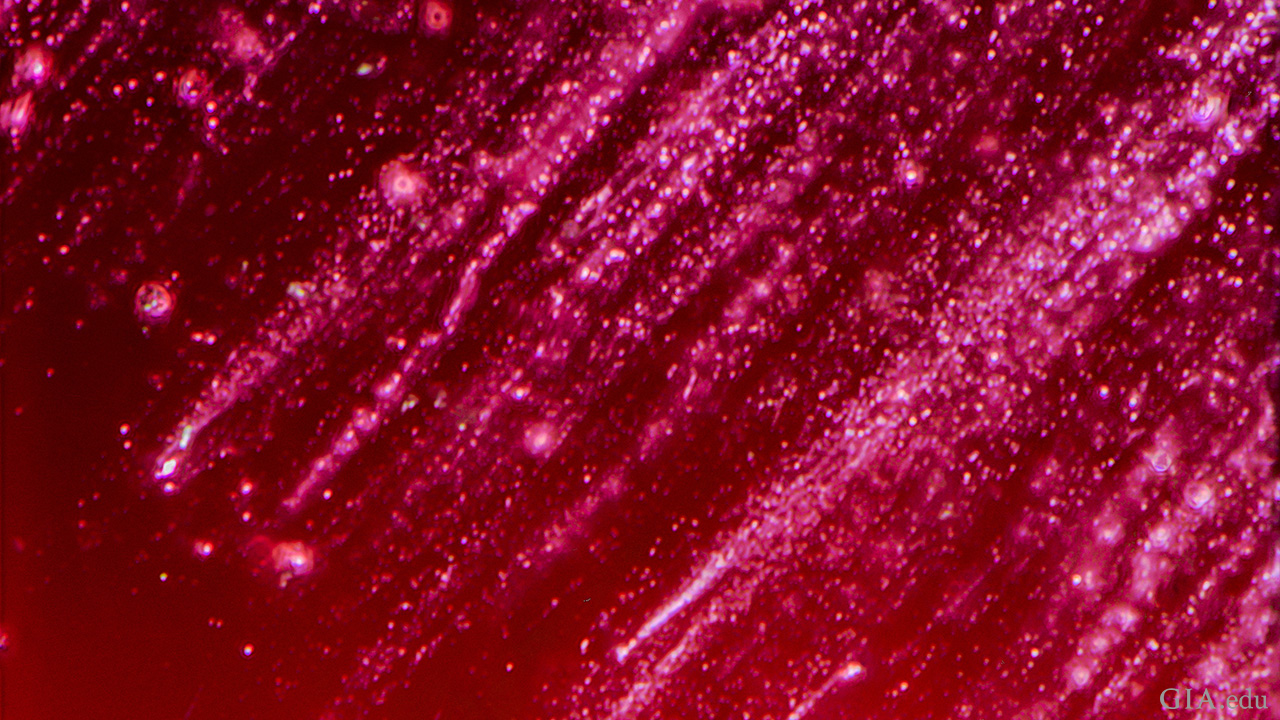 Synthetic rubies are grown by different methods, and they display different micro-features than those seen in natural rubies.

Innovative new treatments have also played a major role in satisfying the continued demand for ruby. In the early 1990s, gemological laboratories saw the introduction of chromium-diffused rubies (McClure et al., 1993). In the early 2000s, lead-glass filling of low-quality rubies reached international markets and became one of the most widespread—and most problematic—treatments in the gem trade (McClure et al., 2006). Also encountered in the early 2000s was beryllium diffusion of ruby, which made it possible to produce pleasing red colors from stones with strong brown or dark tones that would not respond to traditional heat treatment (Emmett et al., 2003). Rubies from Songea, Tanzania, for example, were dramatically improved with beryllium diffusion. 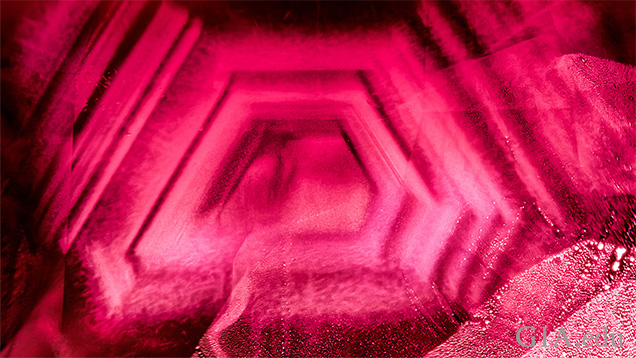 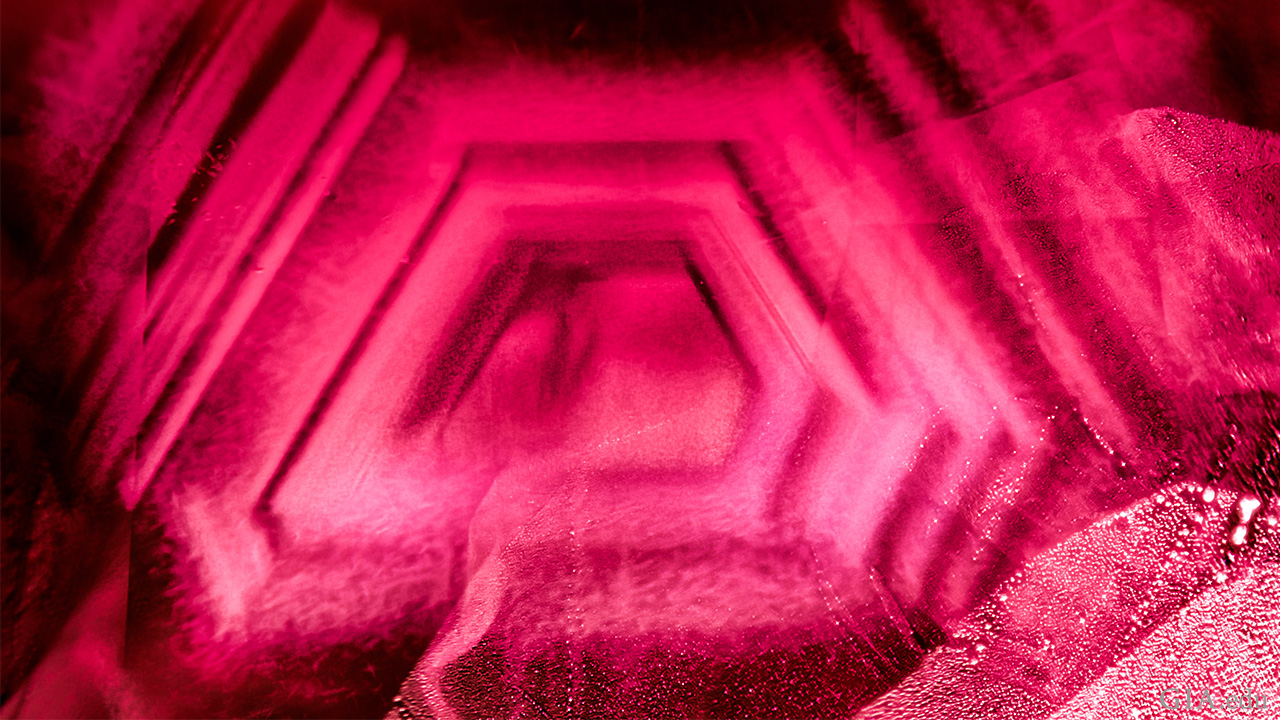 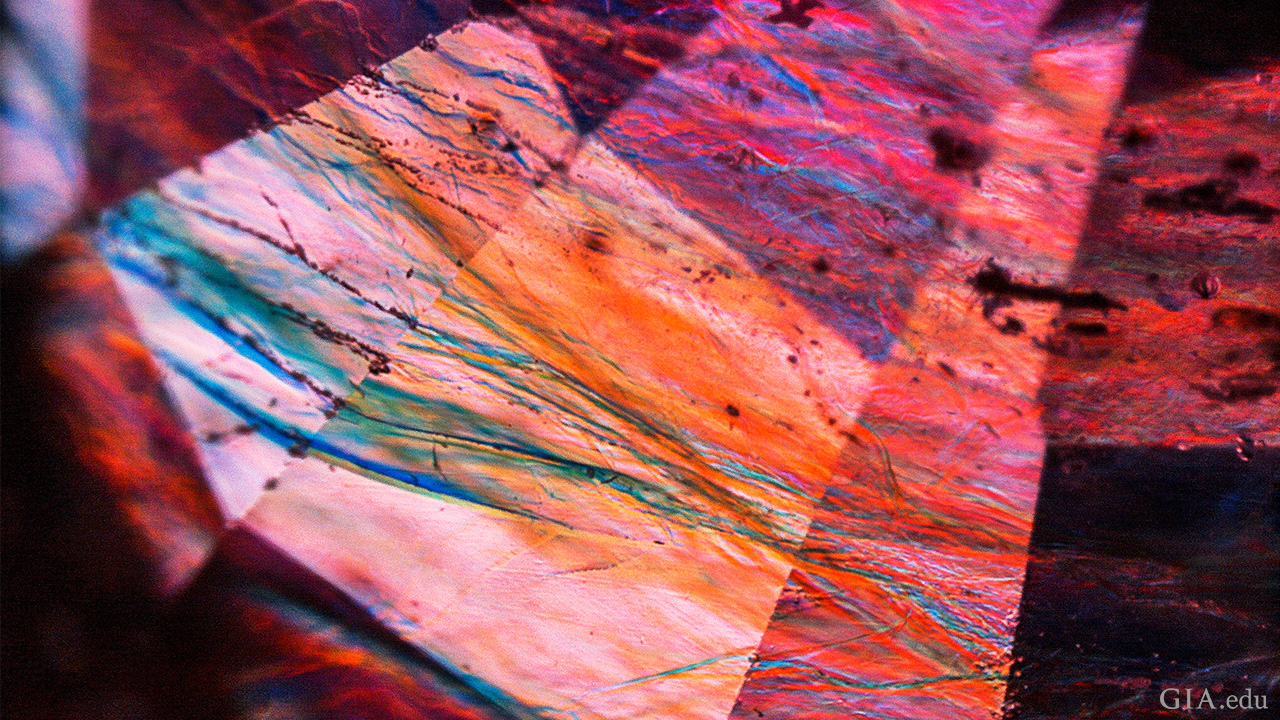 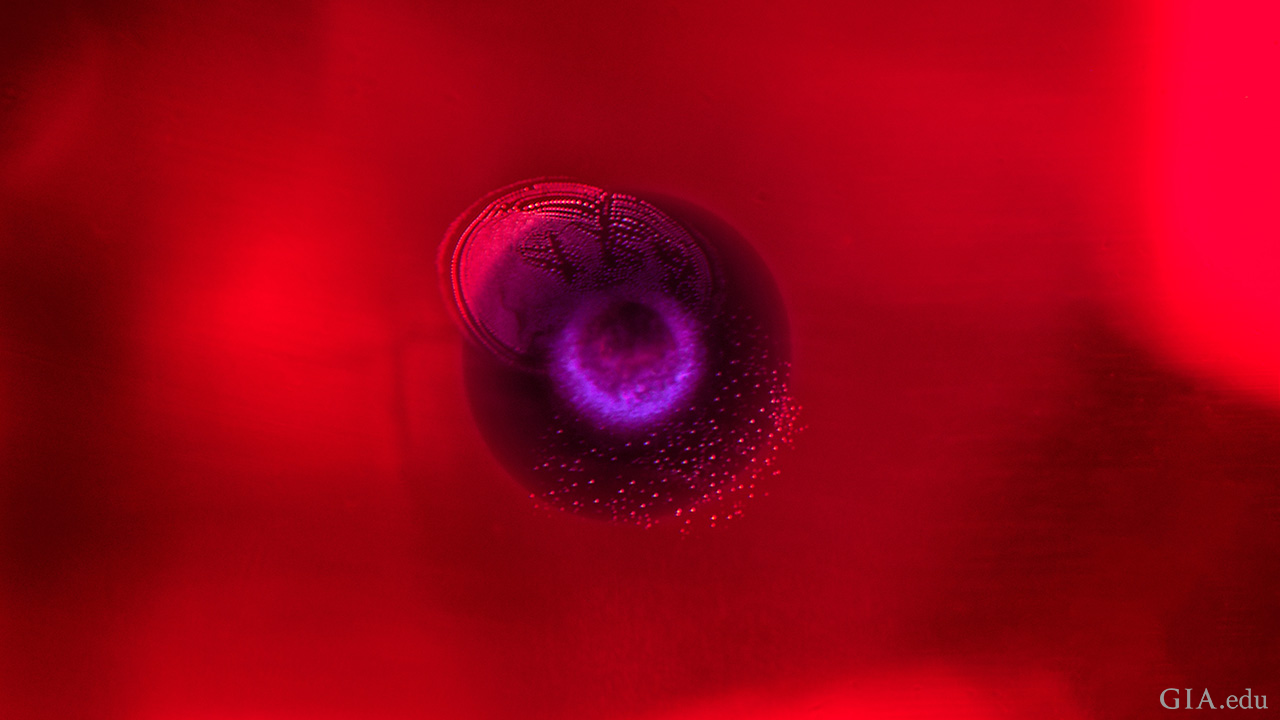 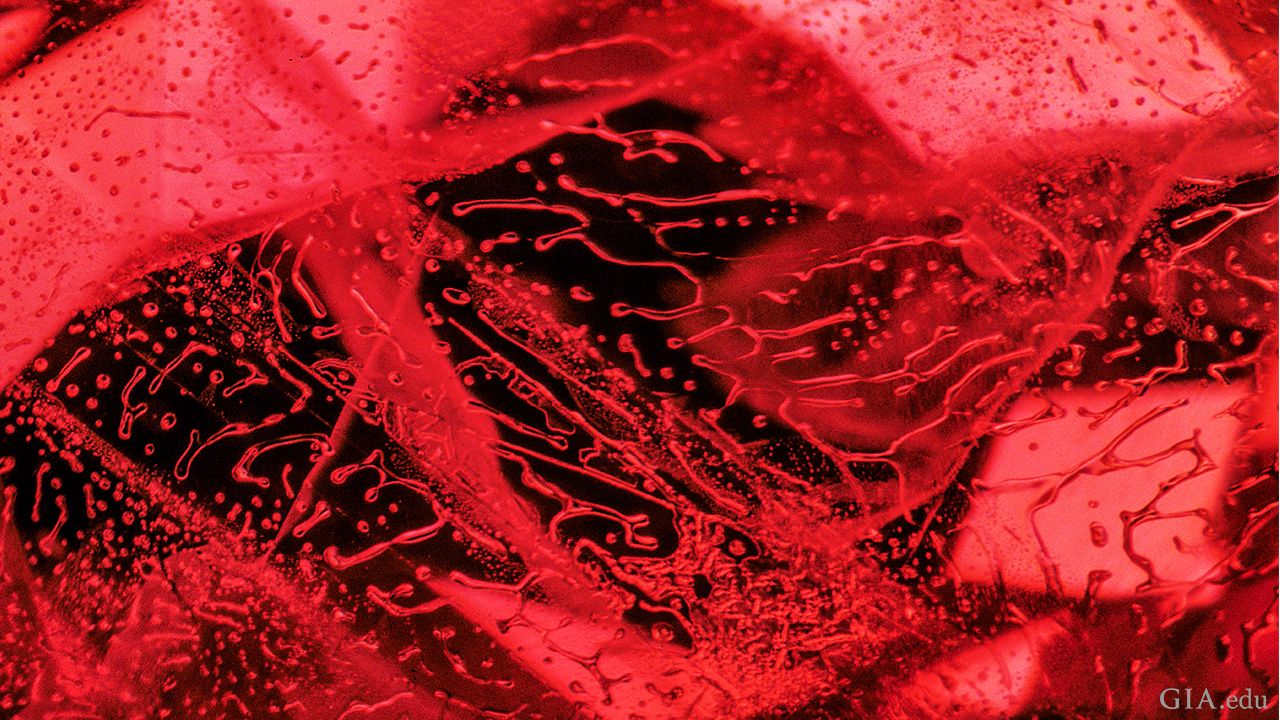 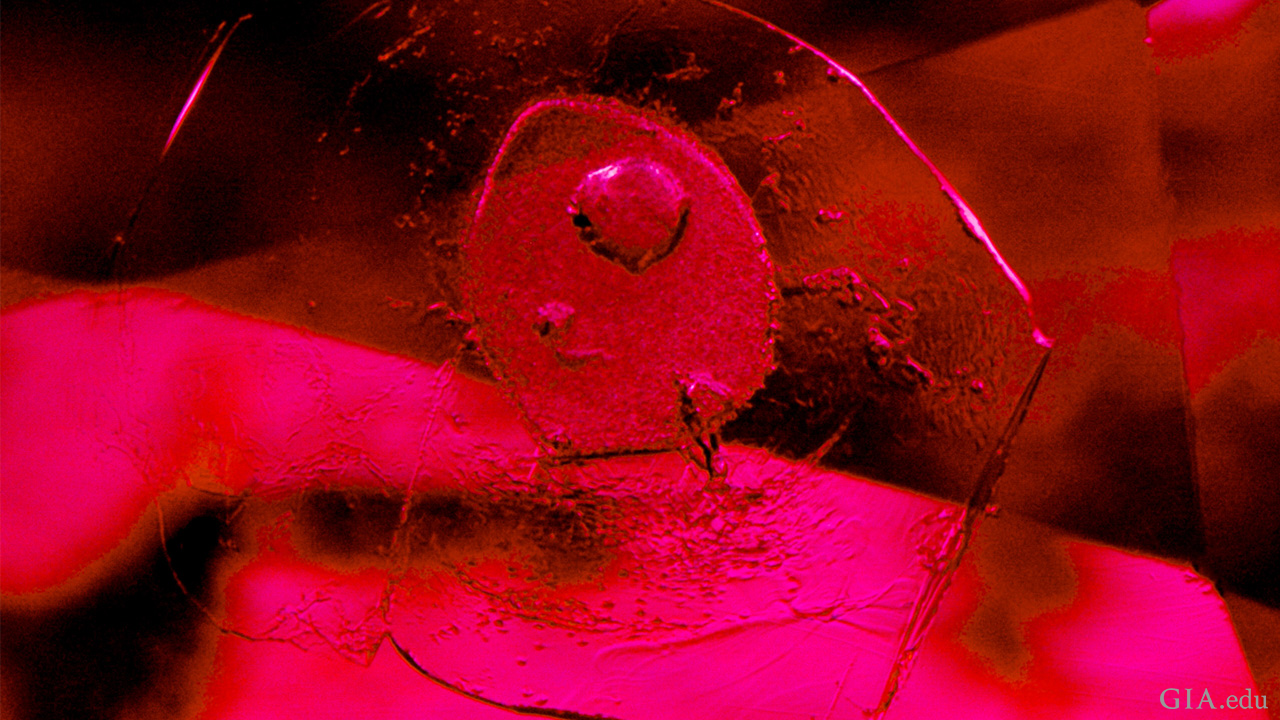 Micro-features seen in rubies that have been treated by heating, or by filling of open fractures, to improve their color and clarity.

Demand has also been met by several new ruby deposits in the last decade. Mozambique has become the leading producer of gem-quality rubies since the discovery in Montepuez in 2009. More than two million carats of rough from Mozambique were offered at the first Gemfields rough ruby auction in 2014 (Lucas and Pardieu, 2014). 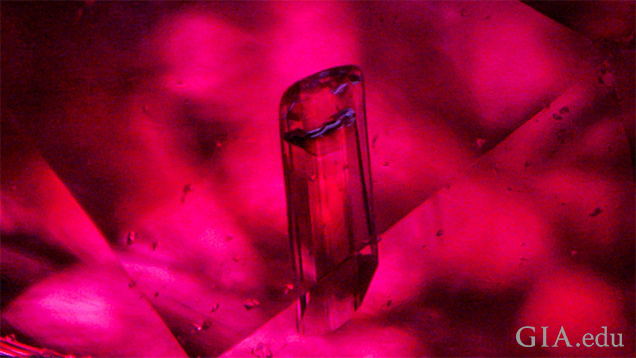 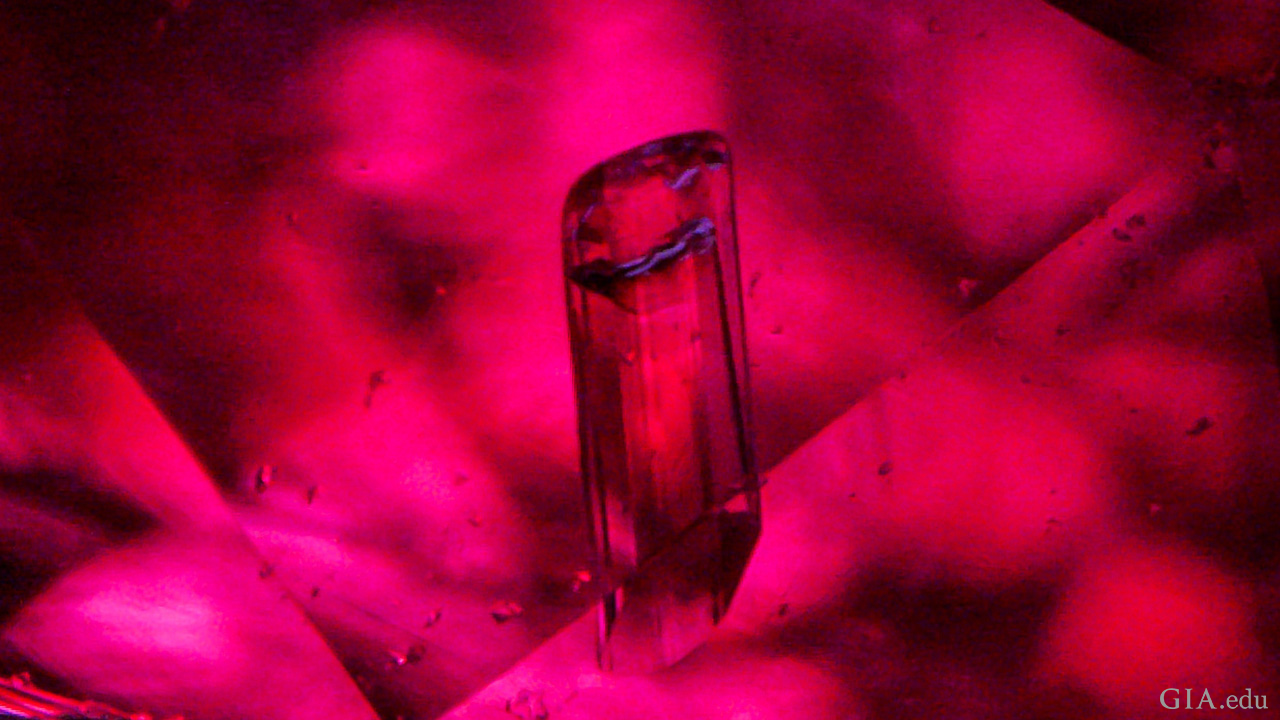 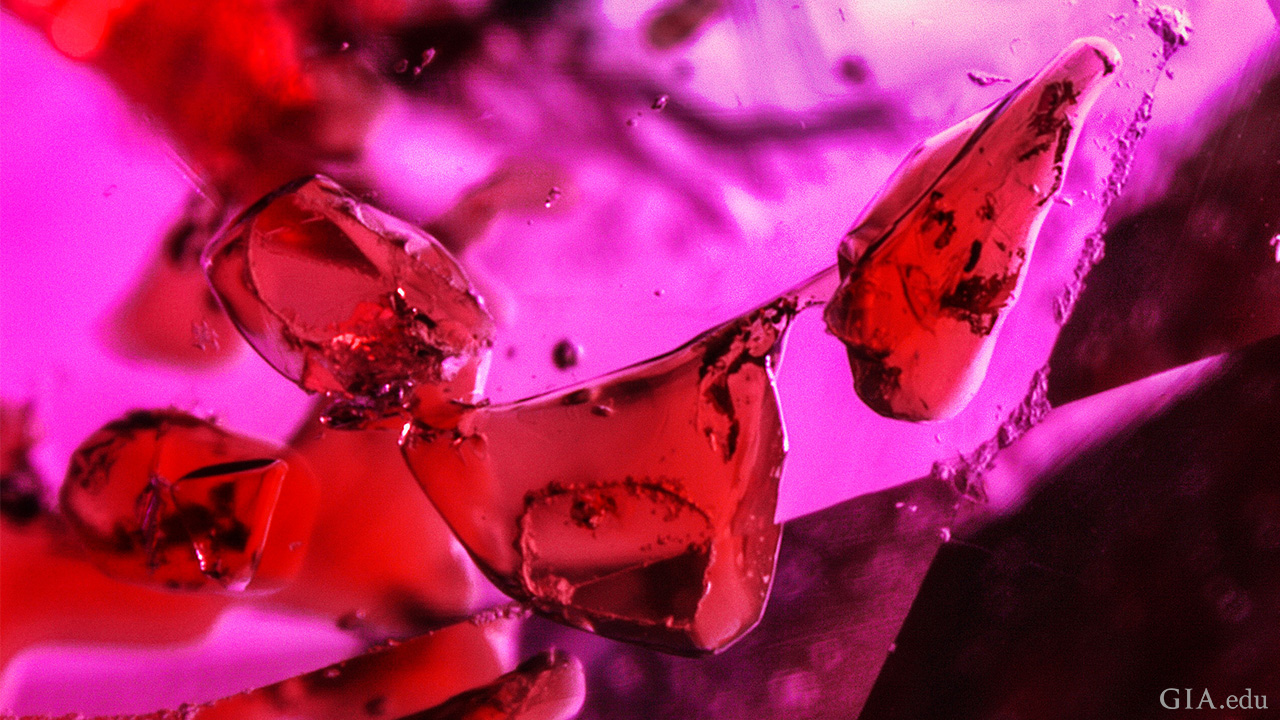 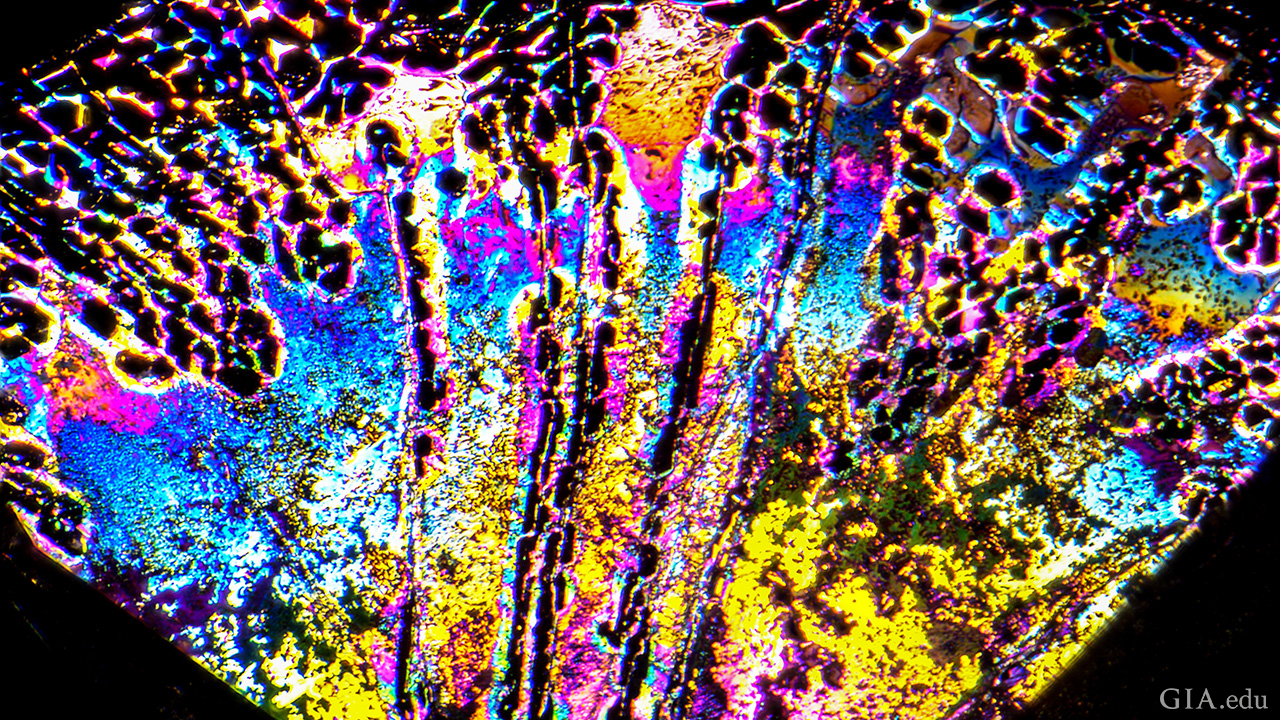 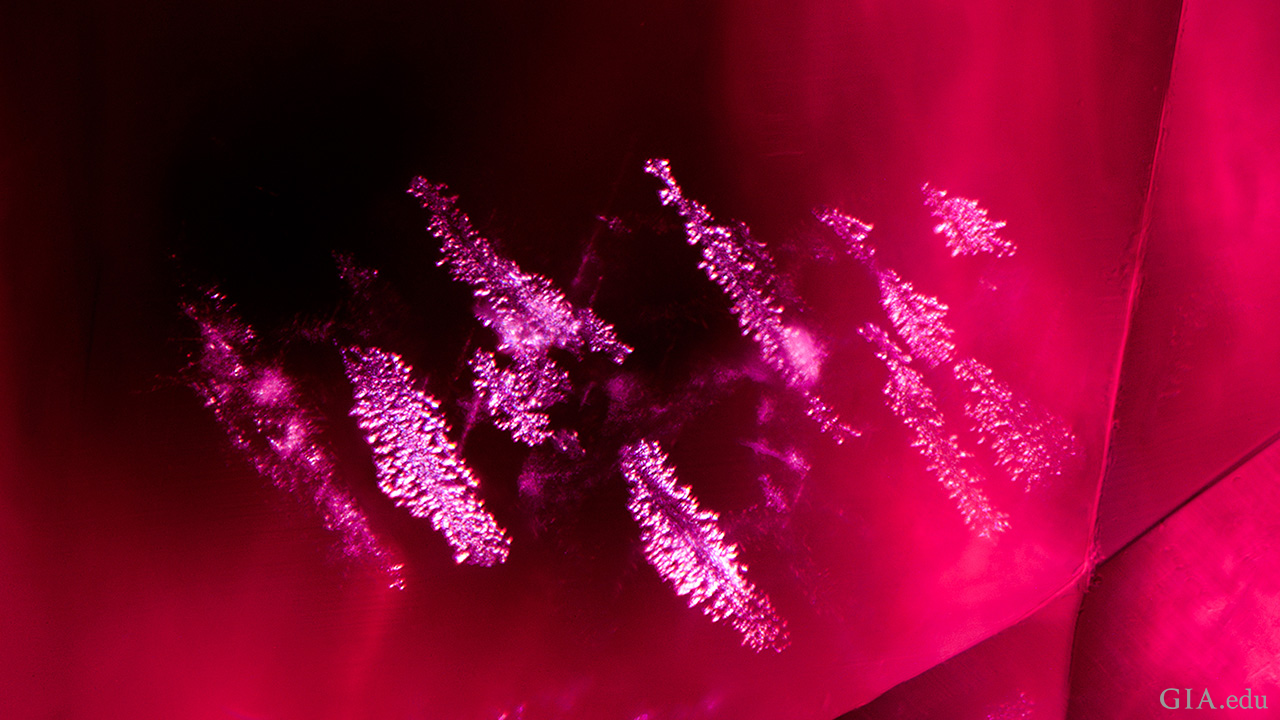 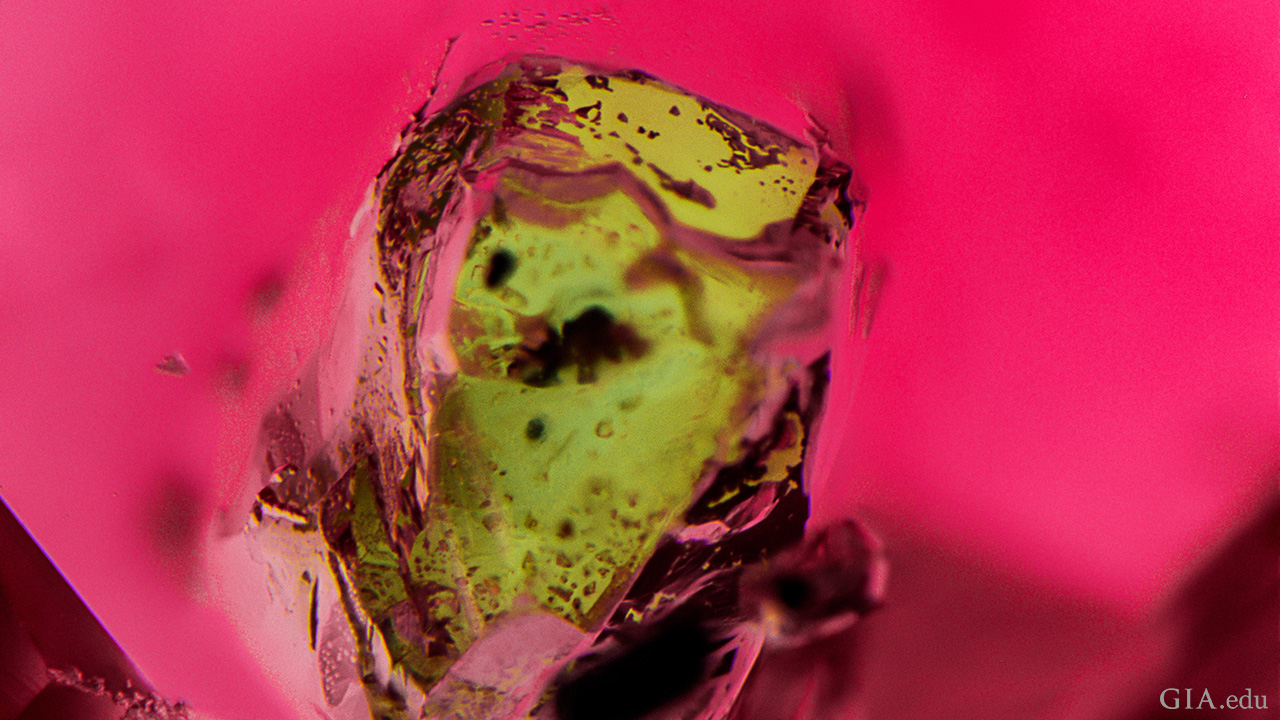 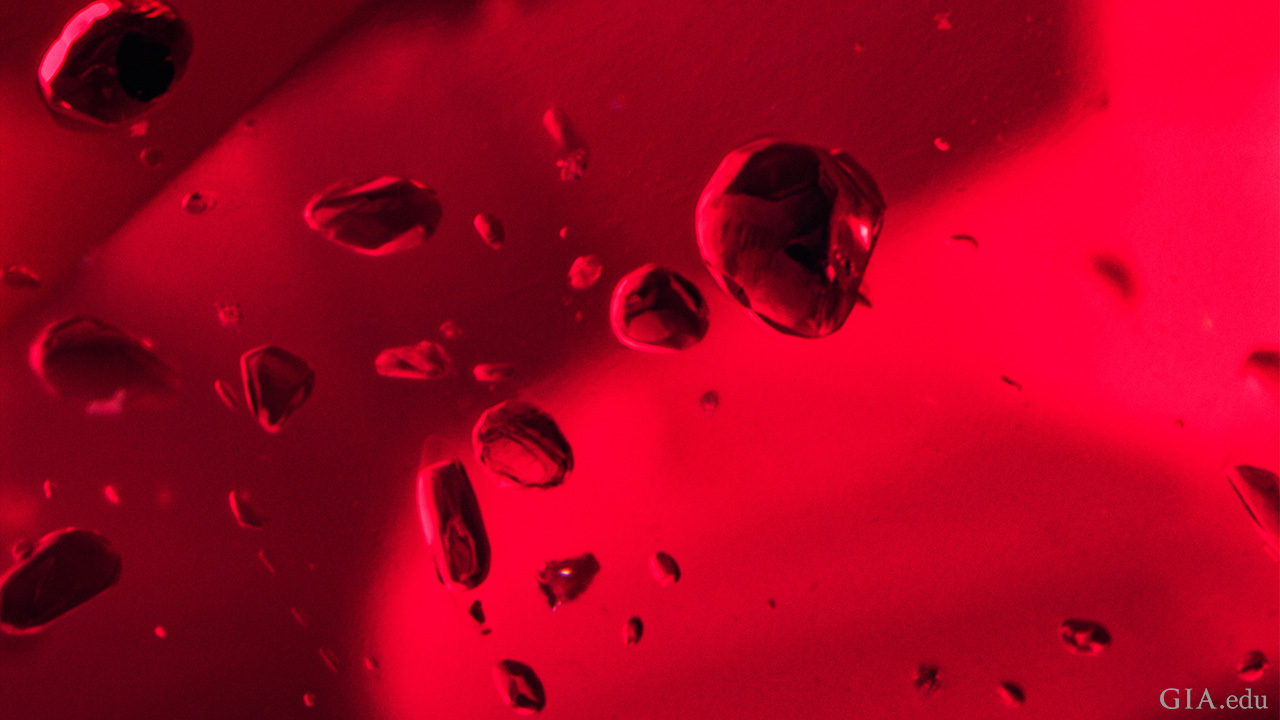 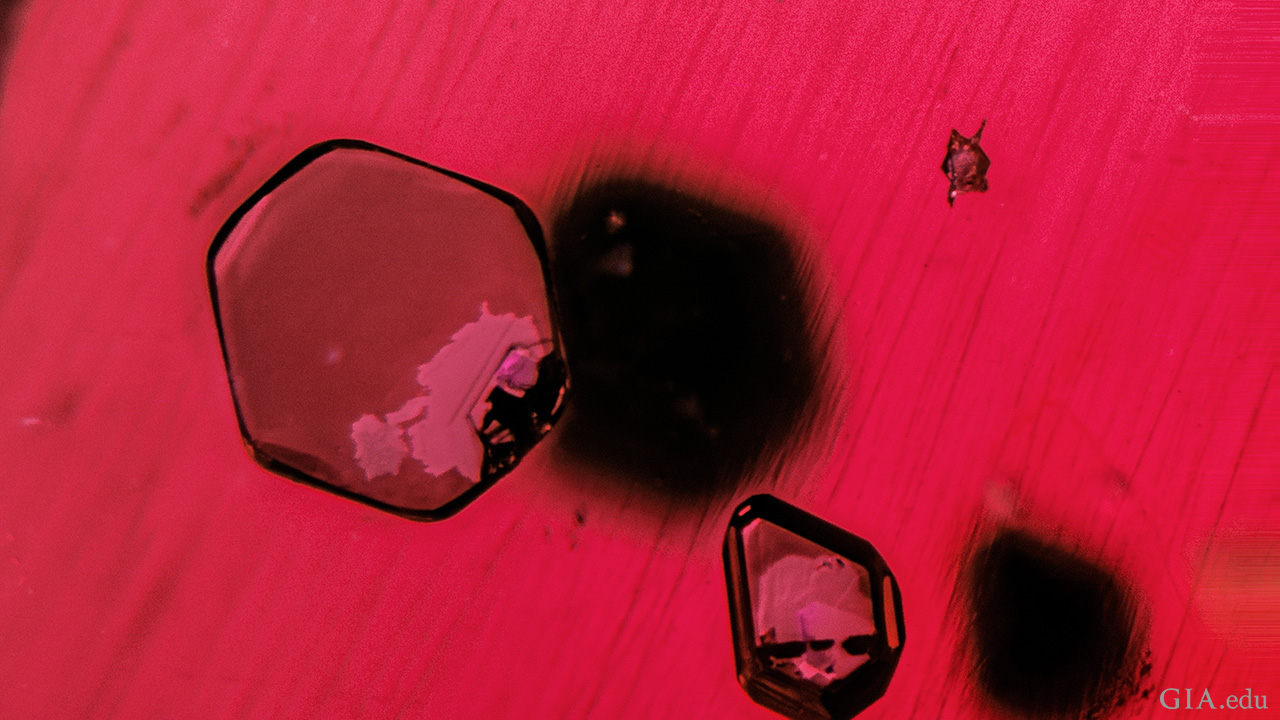 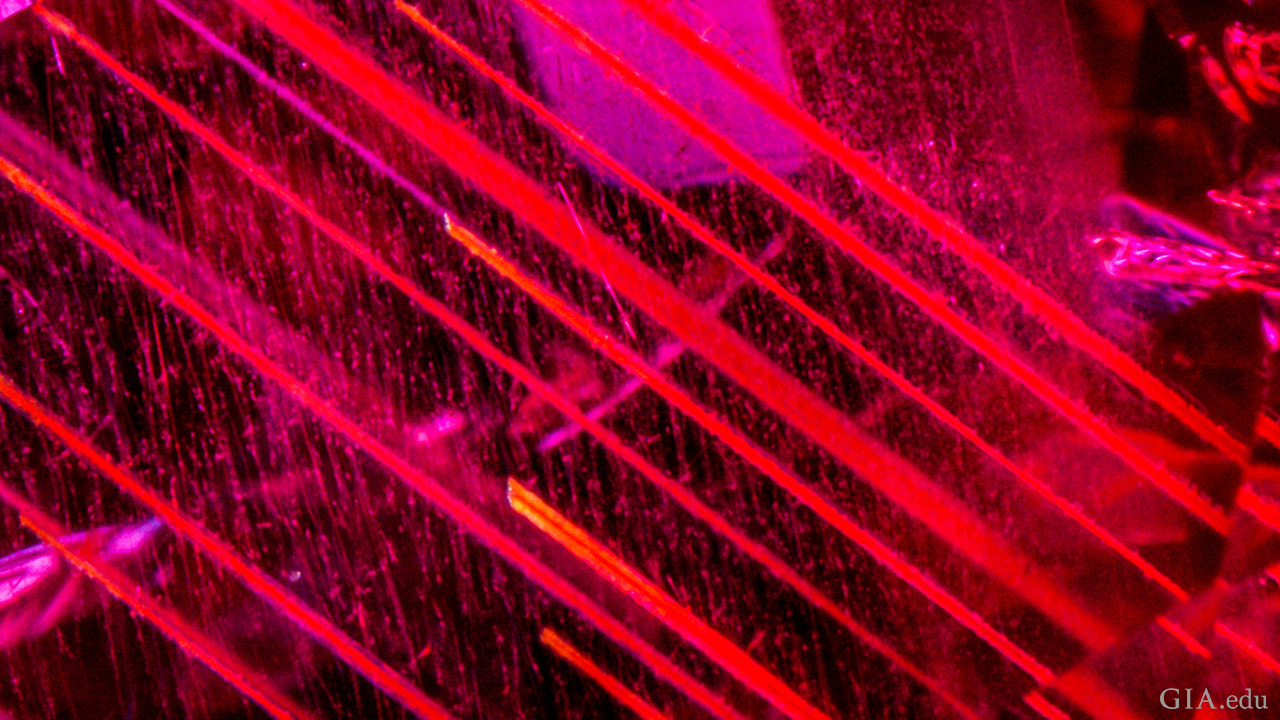 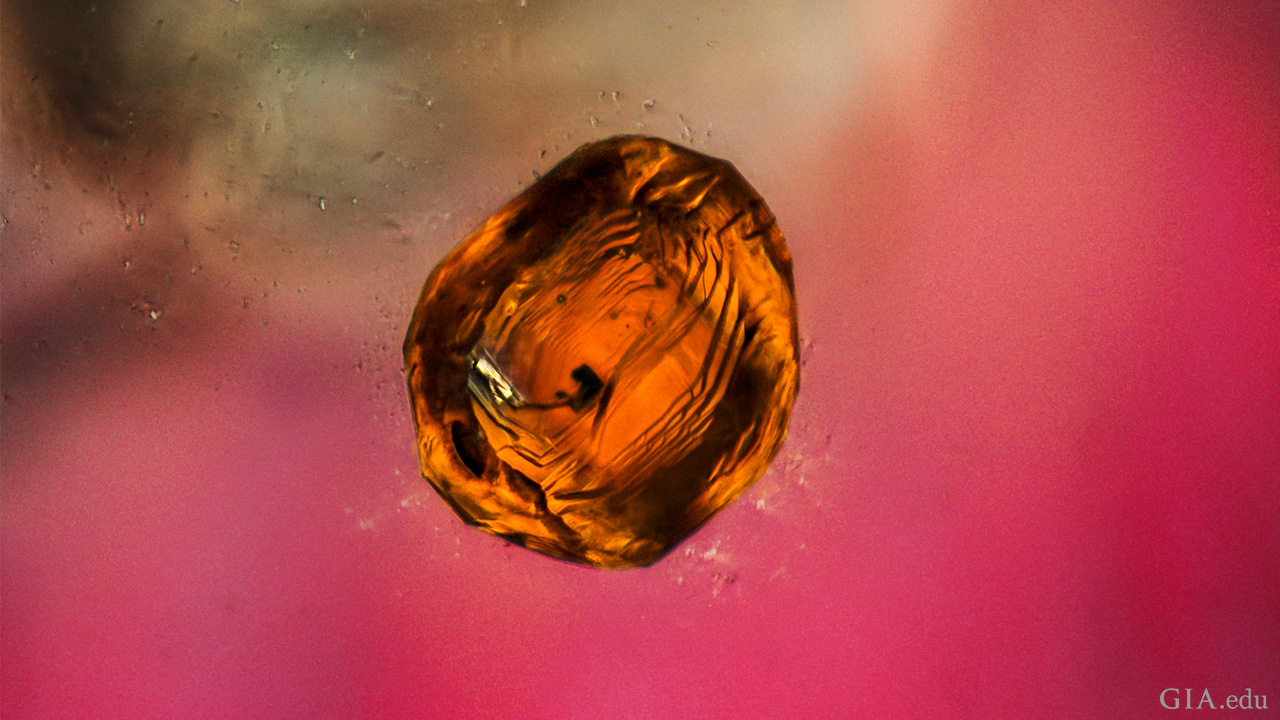 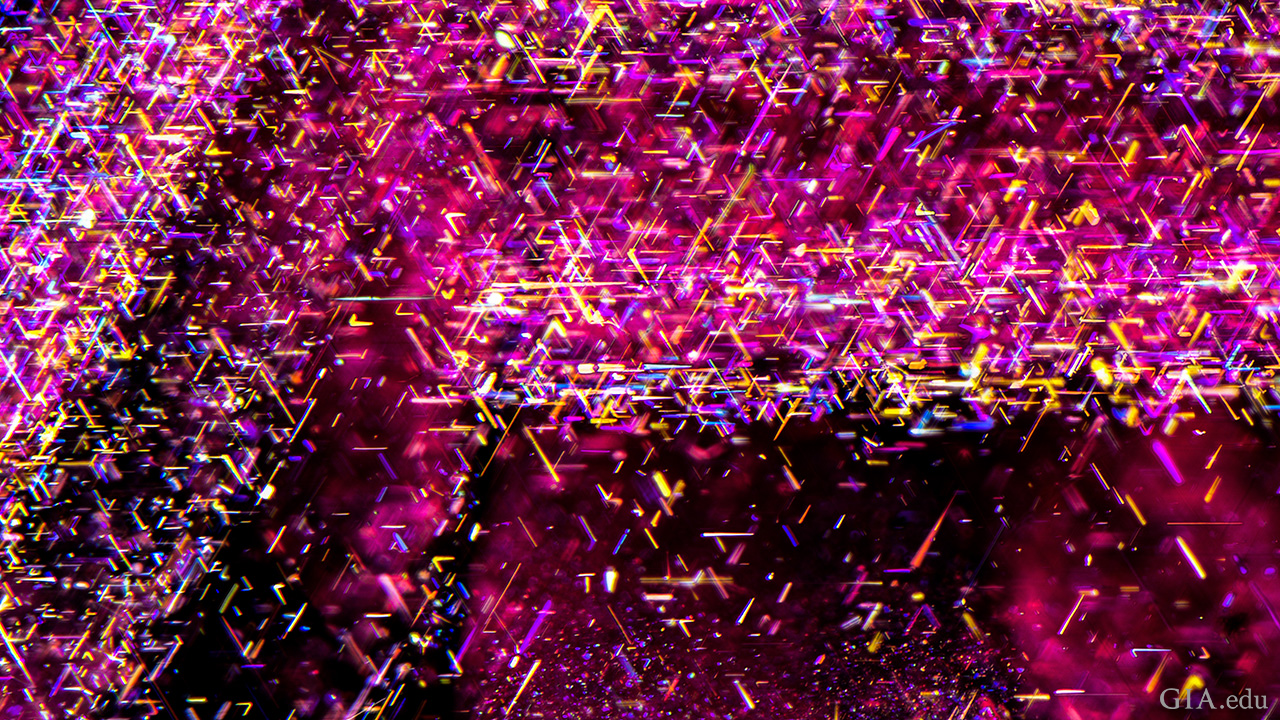 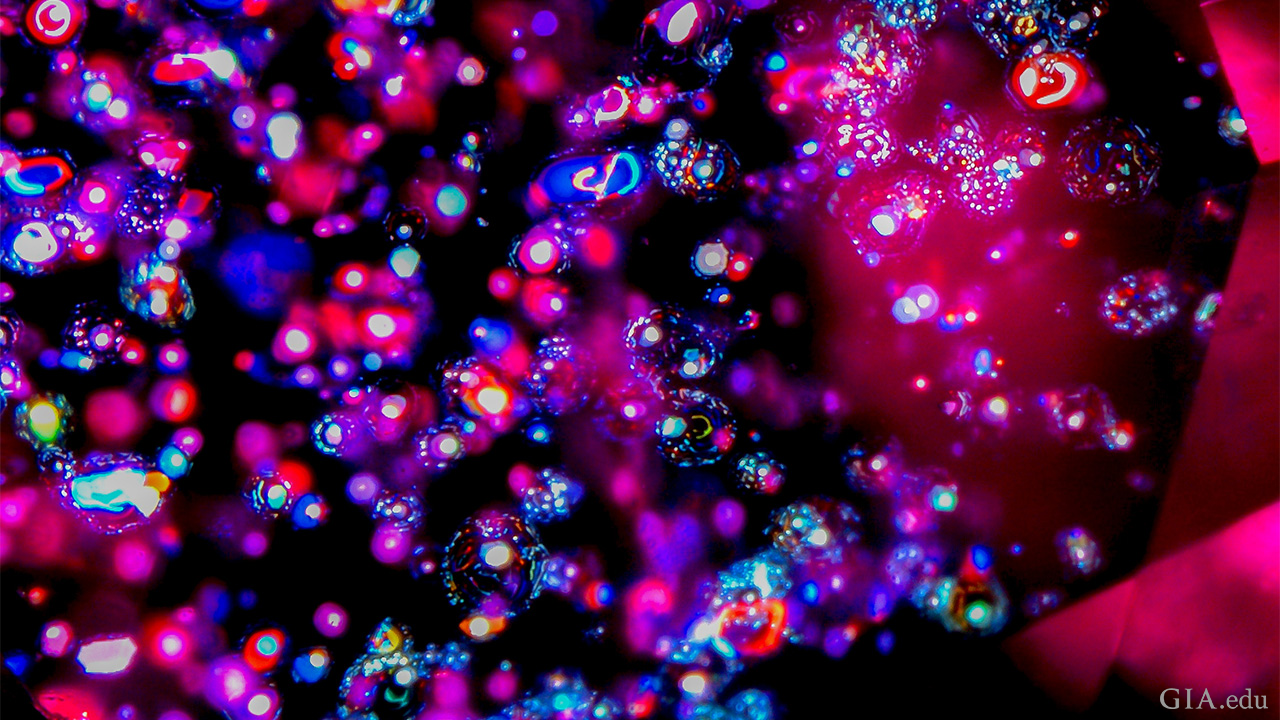 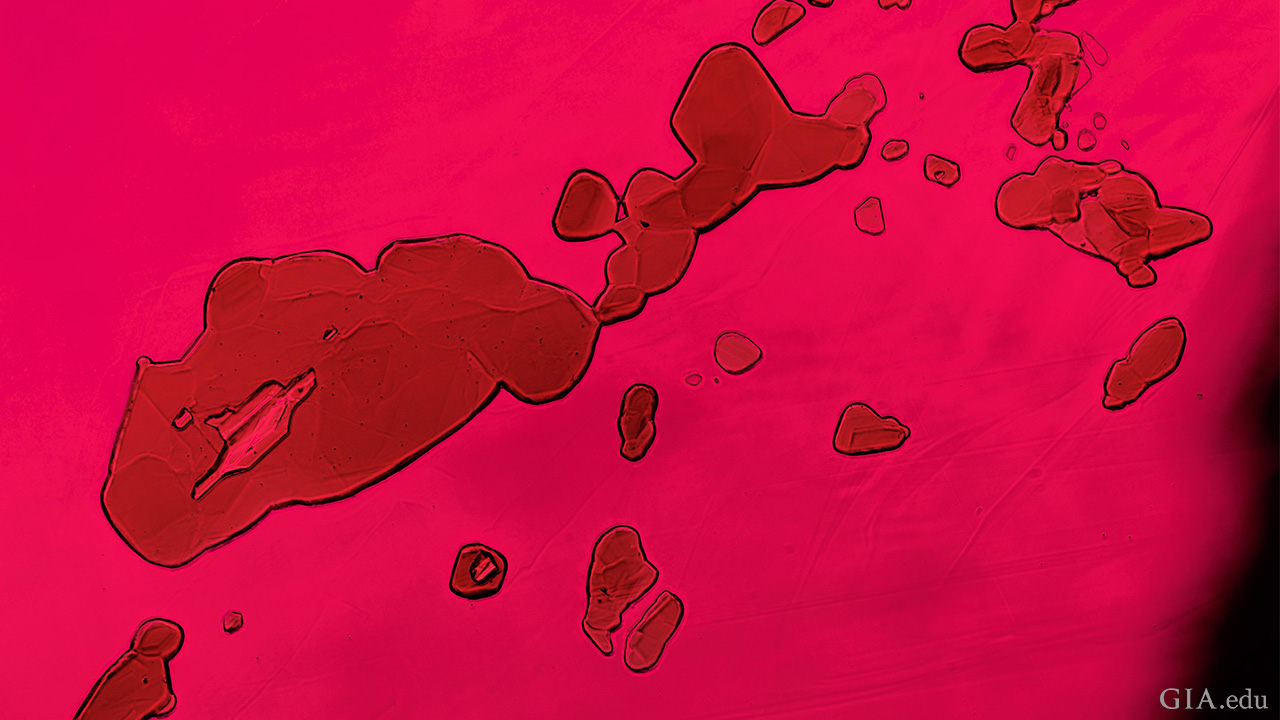 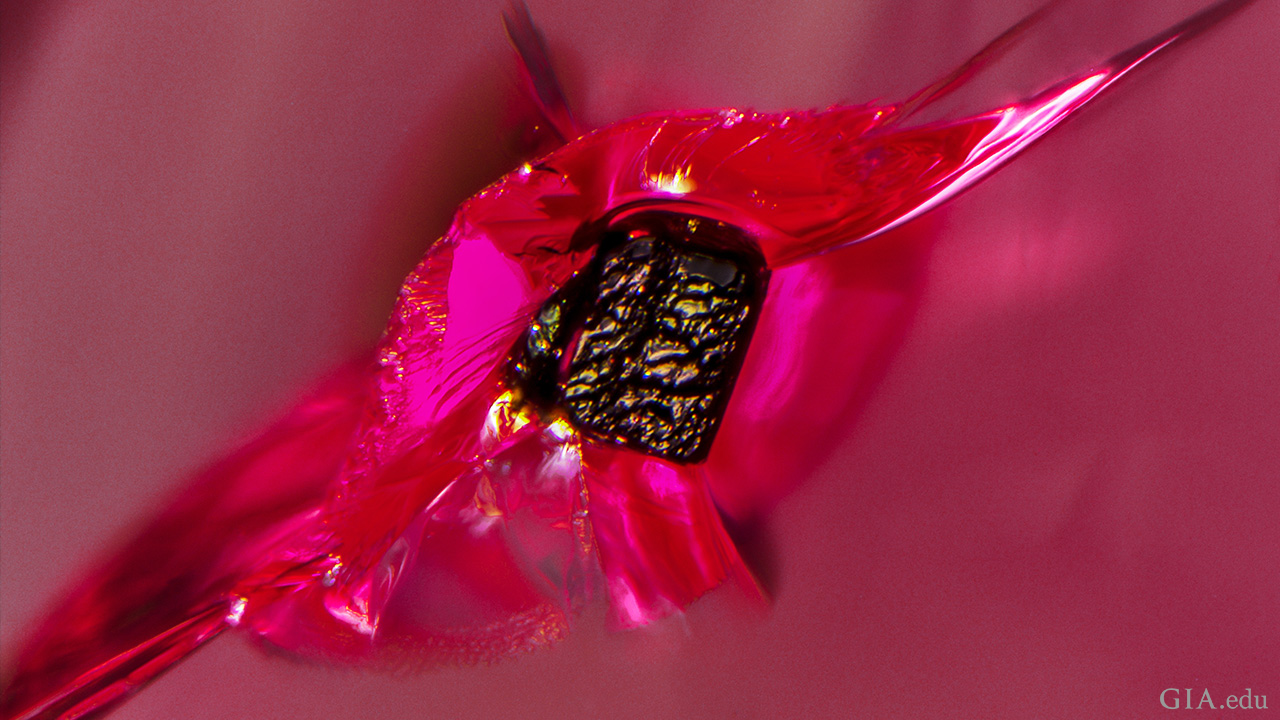 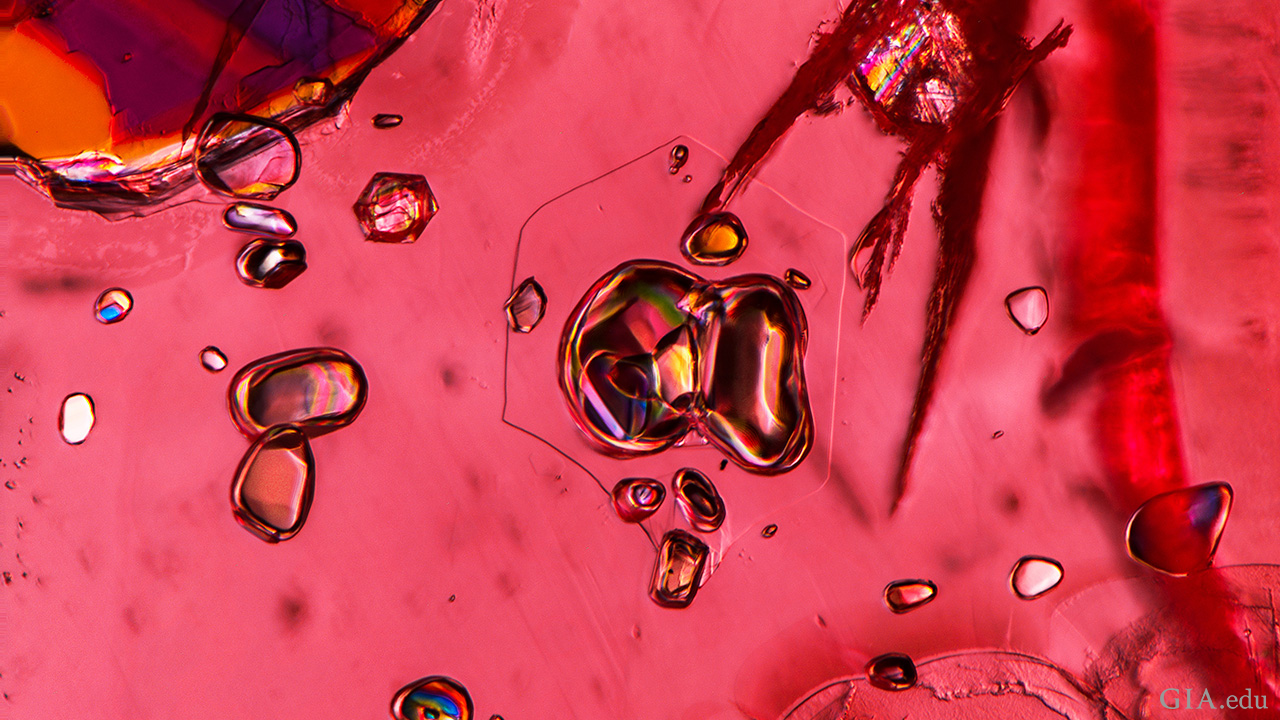 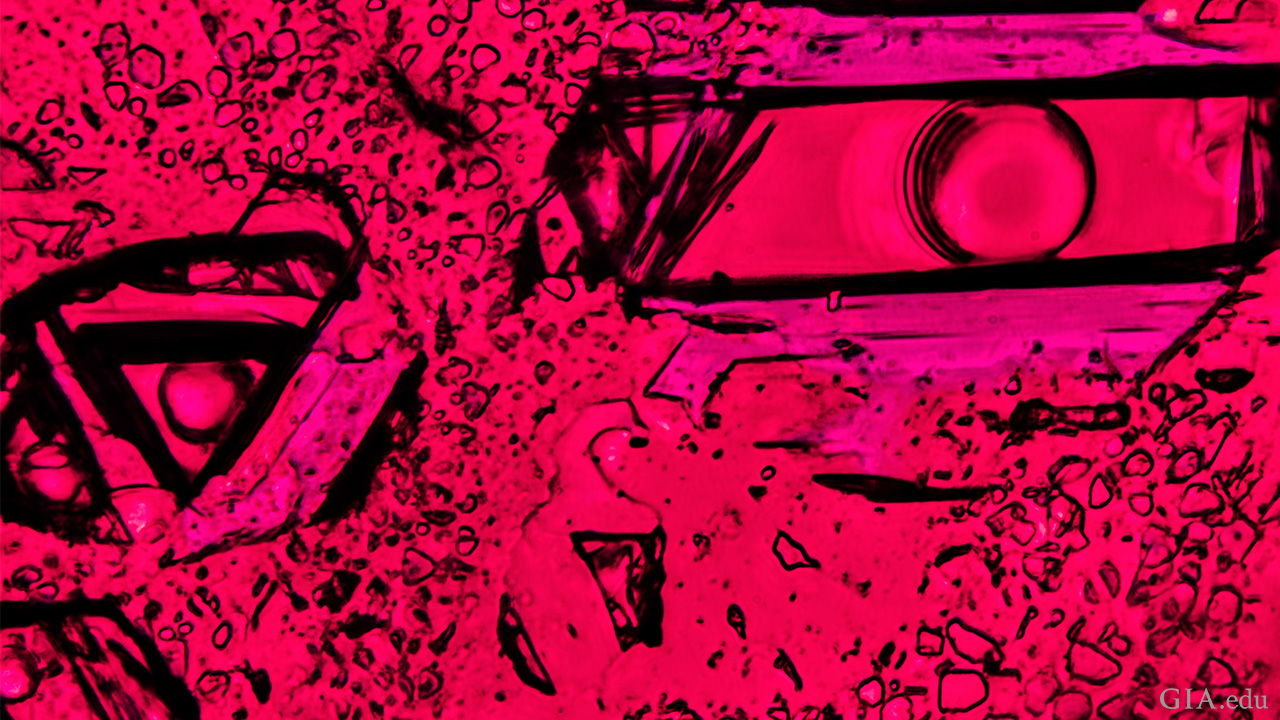 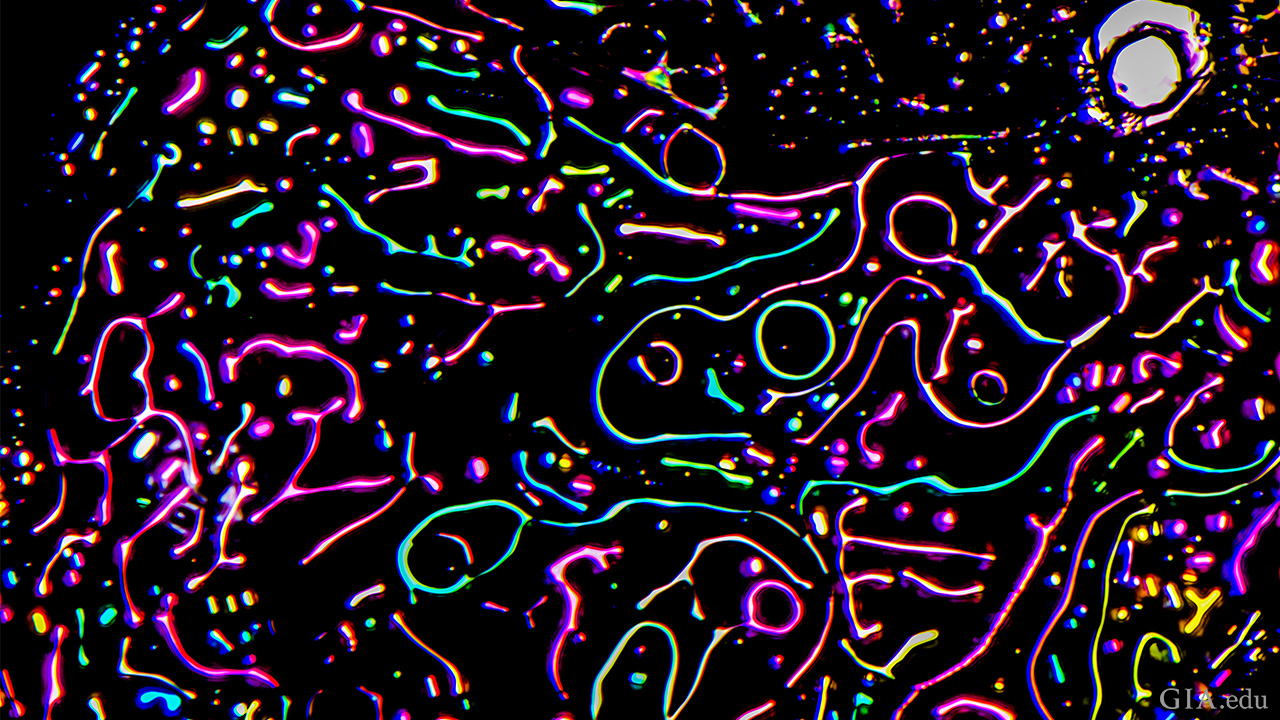 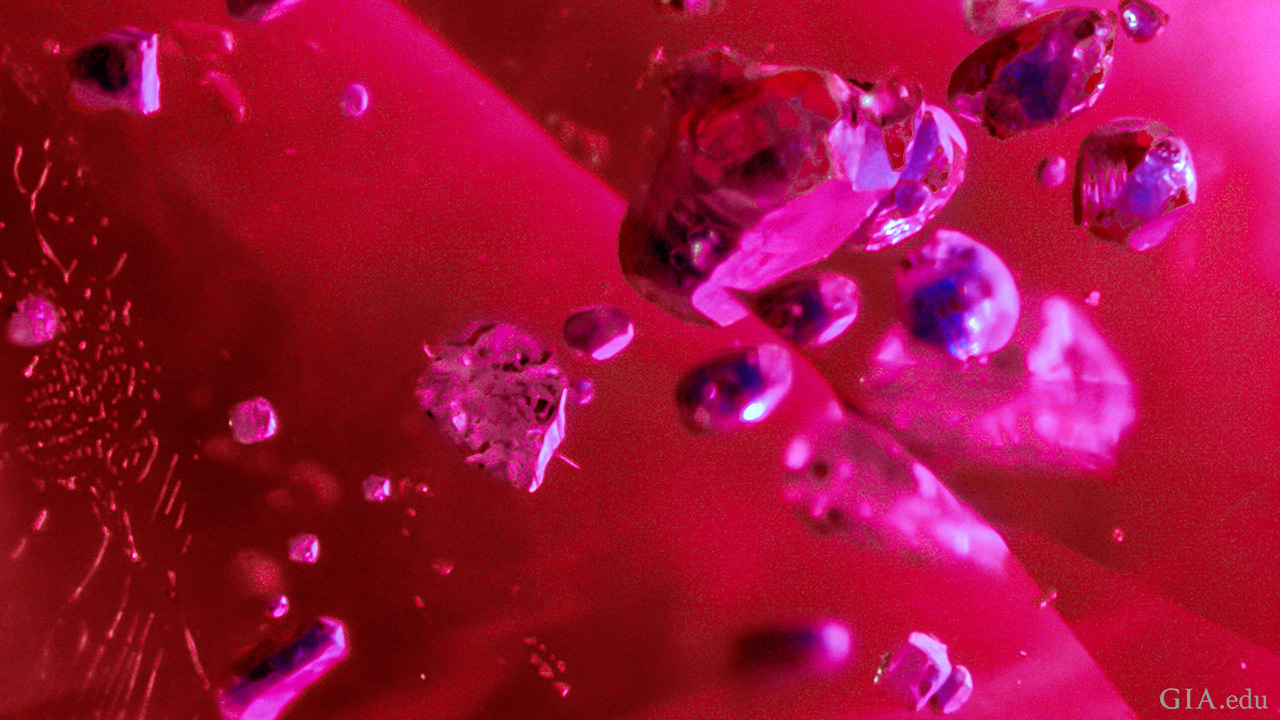 This selection of photomicrographs reveals some of the typical and less common inclusions and other growth features seen in natural rubies.

The photomicrographs chosen for this chart represent a wide range of features one might encounter in natural, treated, and synthetic rubies when examining them with a gemological microscope. Some features are common, while others are exceedingly rare. However, all of the images presented provide the viewer with a tremendous amount of information about the unique micro-world of rubies. For more on ruby and its inclusions, see our suggested reading list. 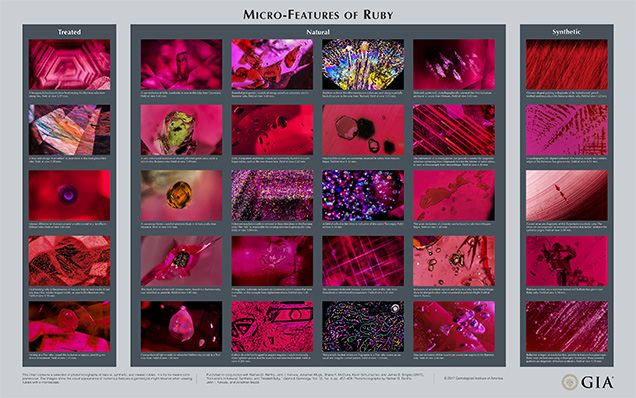 This chart contains a selection of photomicrographs of natural, synthetic, and treated rubies. It is by no means comprehensive. The images show the visual appearance of numerous features a gemologist might observe when viewing rubies with a microscope. Photomicrographs by Nathan D. Renfro, John I. Koivula, and Jonathan Muyal.
About the Authors

Provides a visual guide to the internal features of natural, synthetic, and treated diamonds.

Provides a visual guide to the internal features of natural, synthetic, and treated emeralds.