This short introduction accompanies a chart illustrating some of the characteristic inclusions and other internal features seen in emerald (see above). Over the past 50 years, the observation of inclusions in colored gemstones, particularly emerald, has become an essential foundation for identification, quality analysis, and origin determination. This chart contains a selection of photomicrographs of natural, synthetic, and treated emeralds. It is by no means comprehensive; photomicrographs of features not seen here can be found in many gemological textbooks. The images show the visual appearance of numerous features a gemologist might observe when viewing emeralds with a microscope. 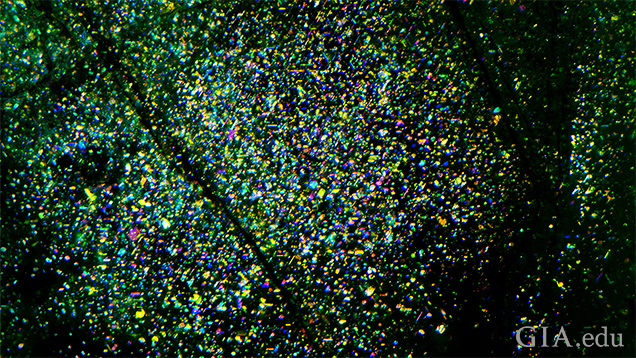 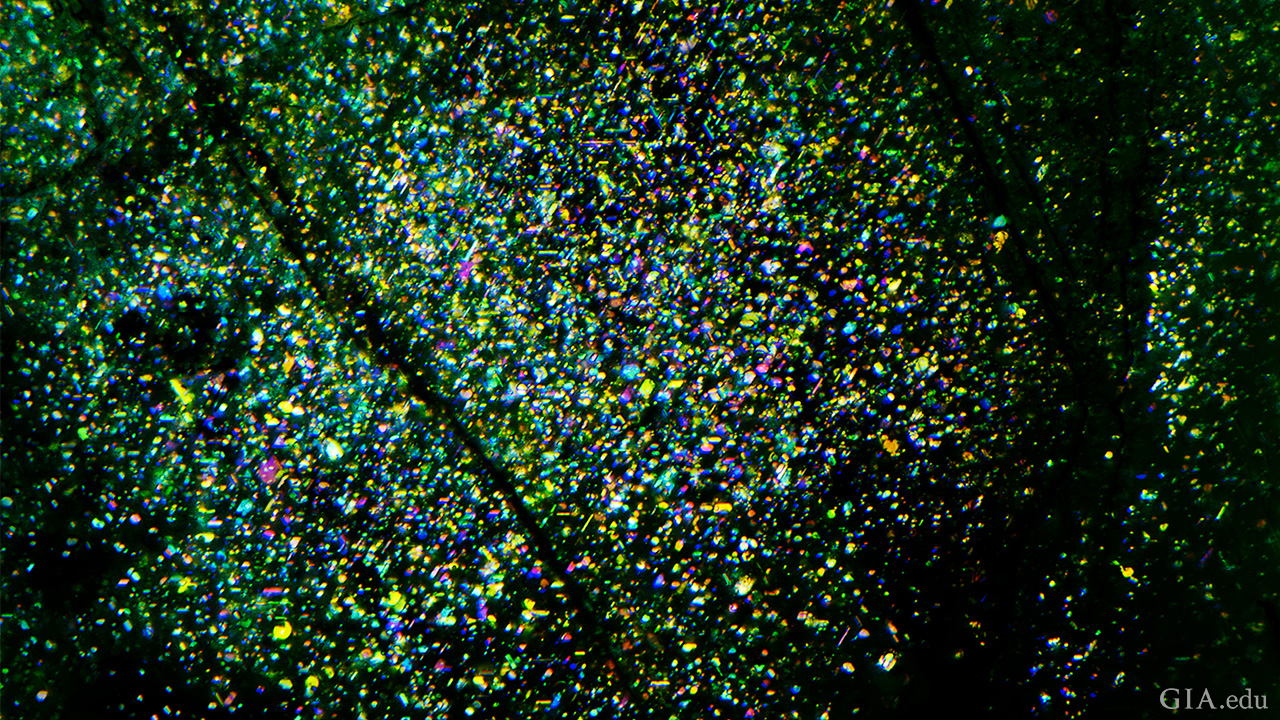 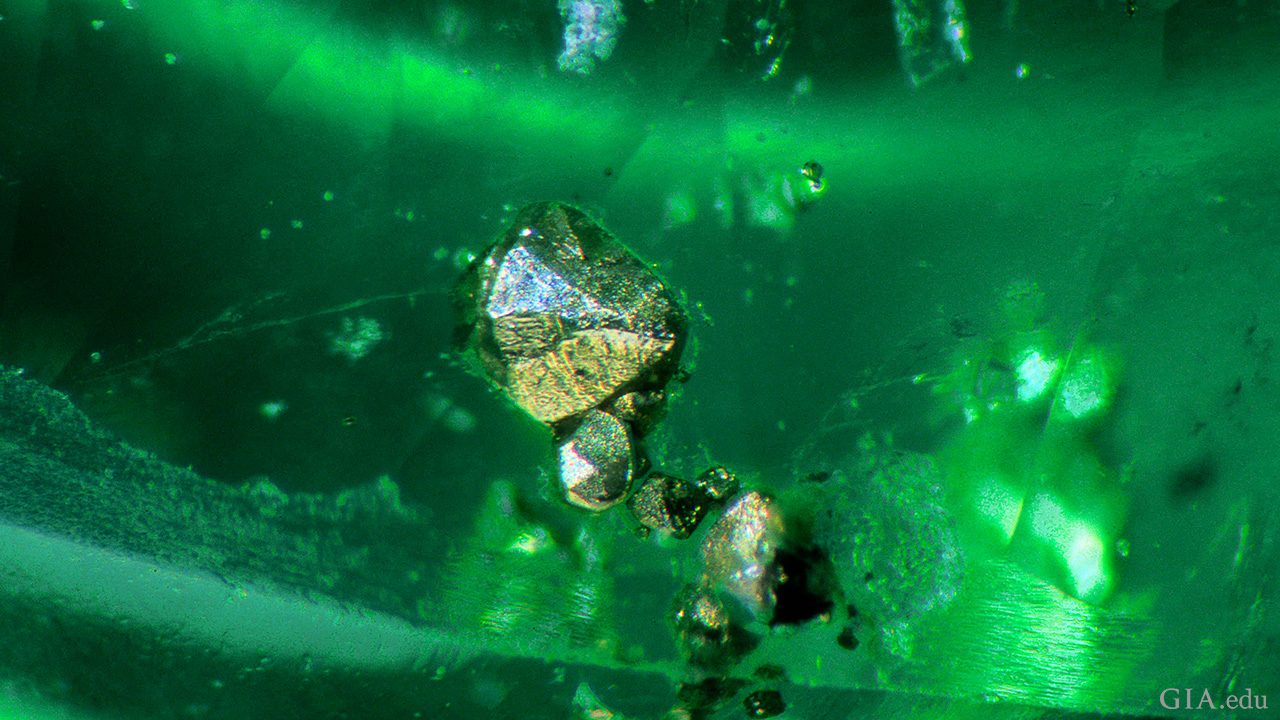 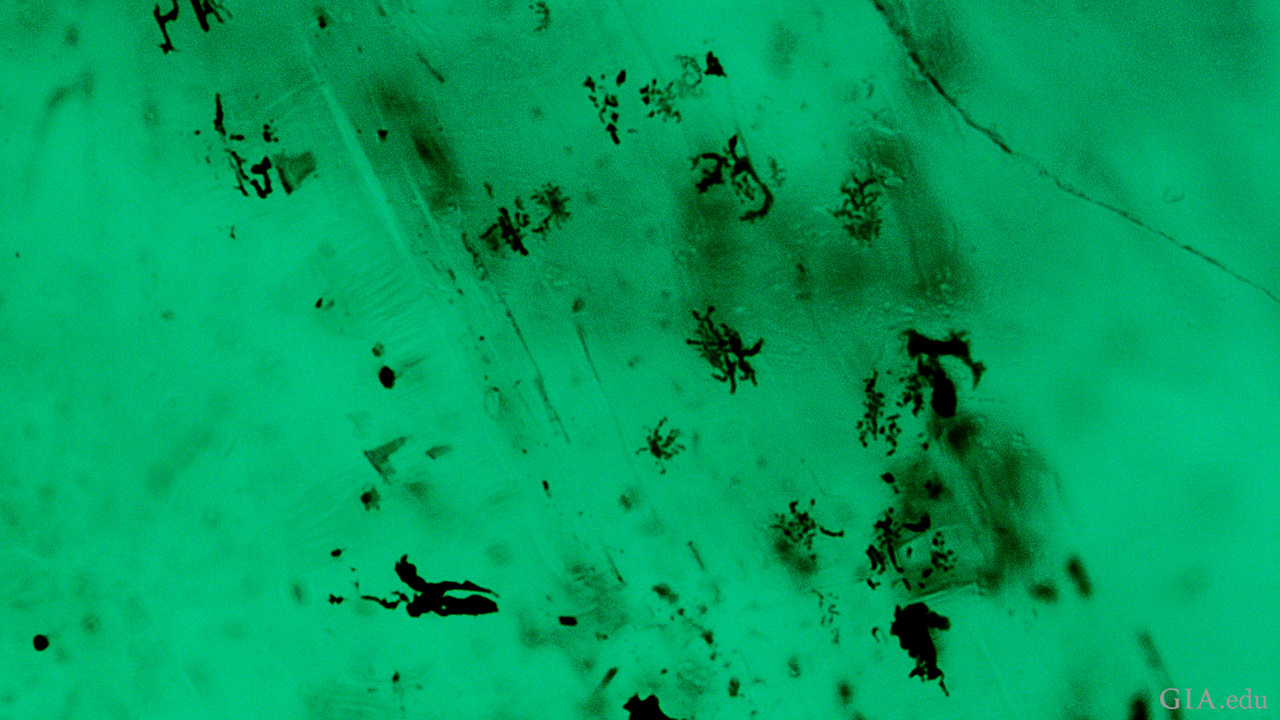 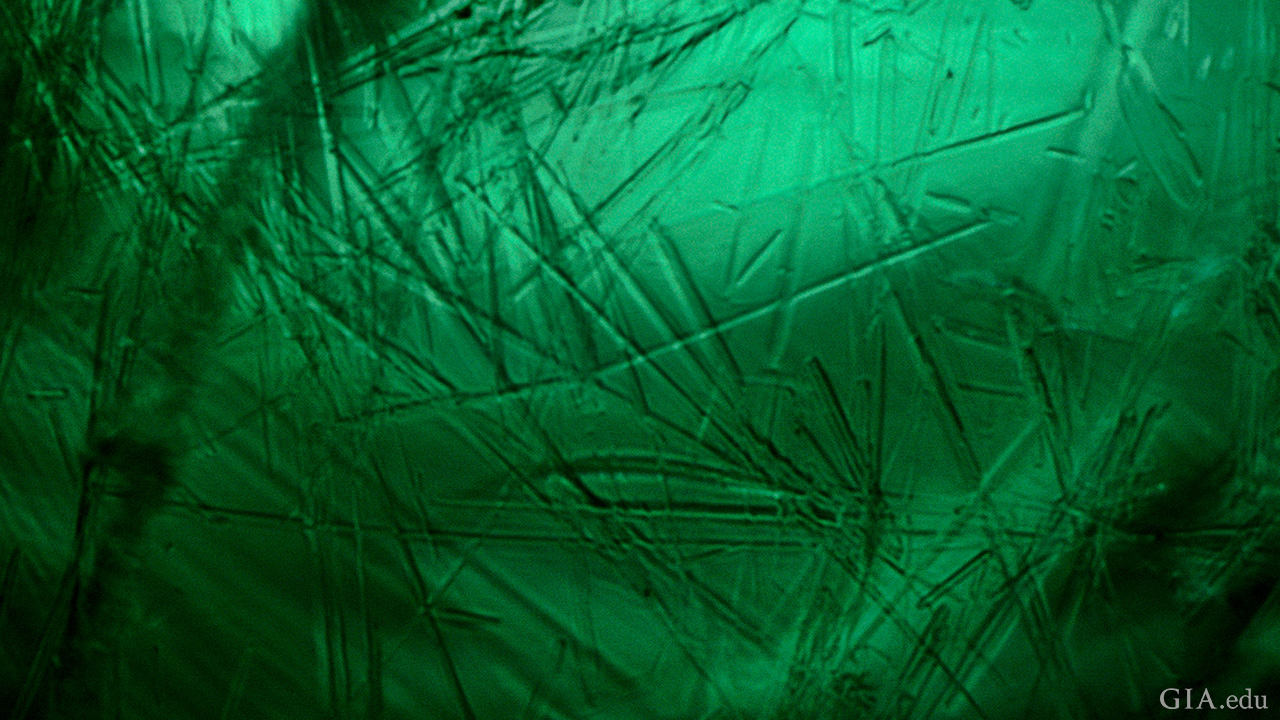 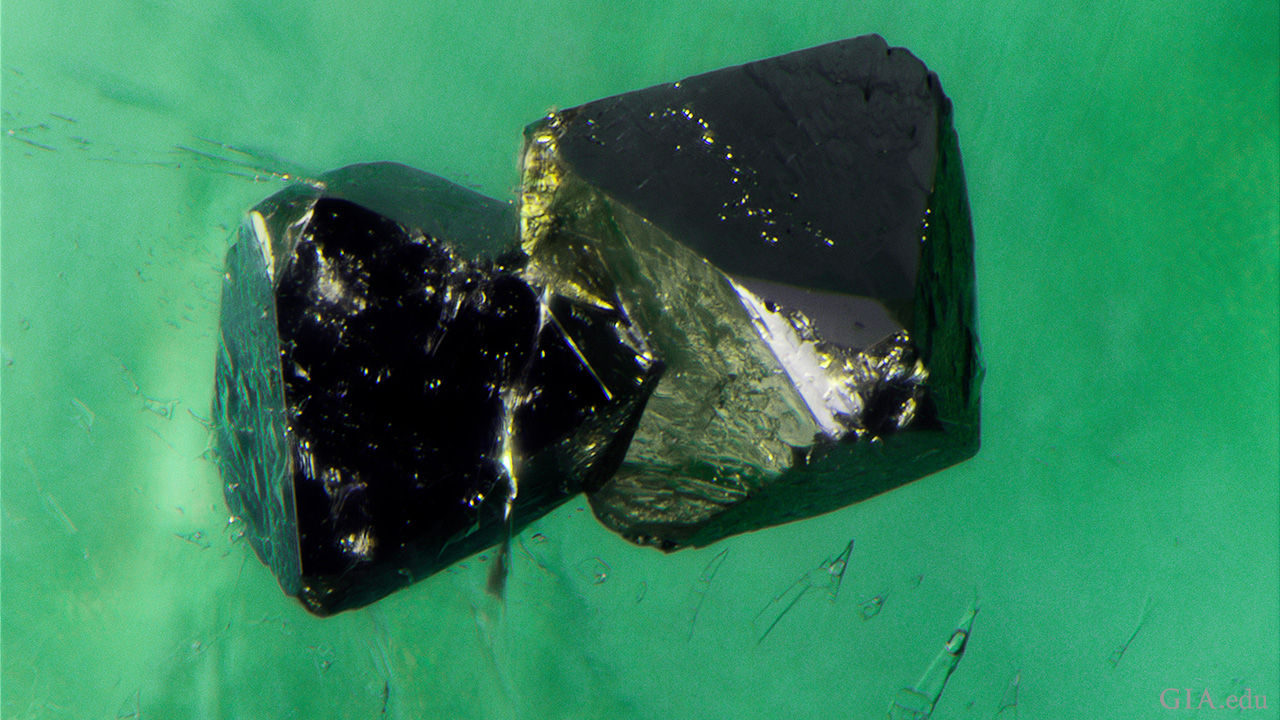 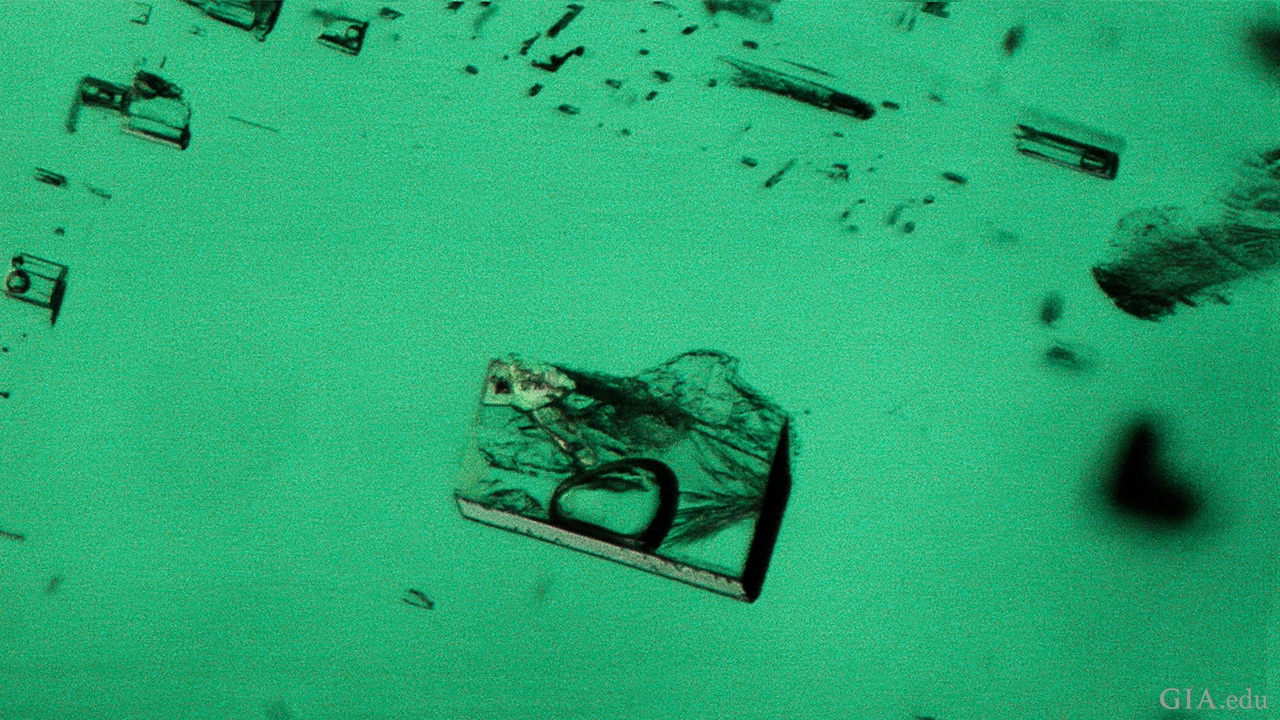 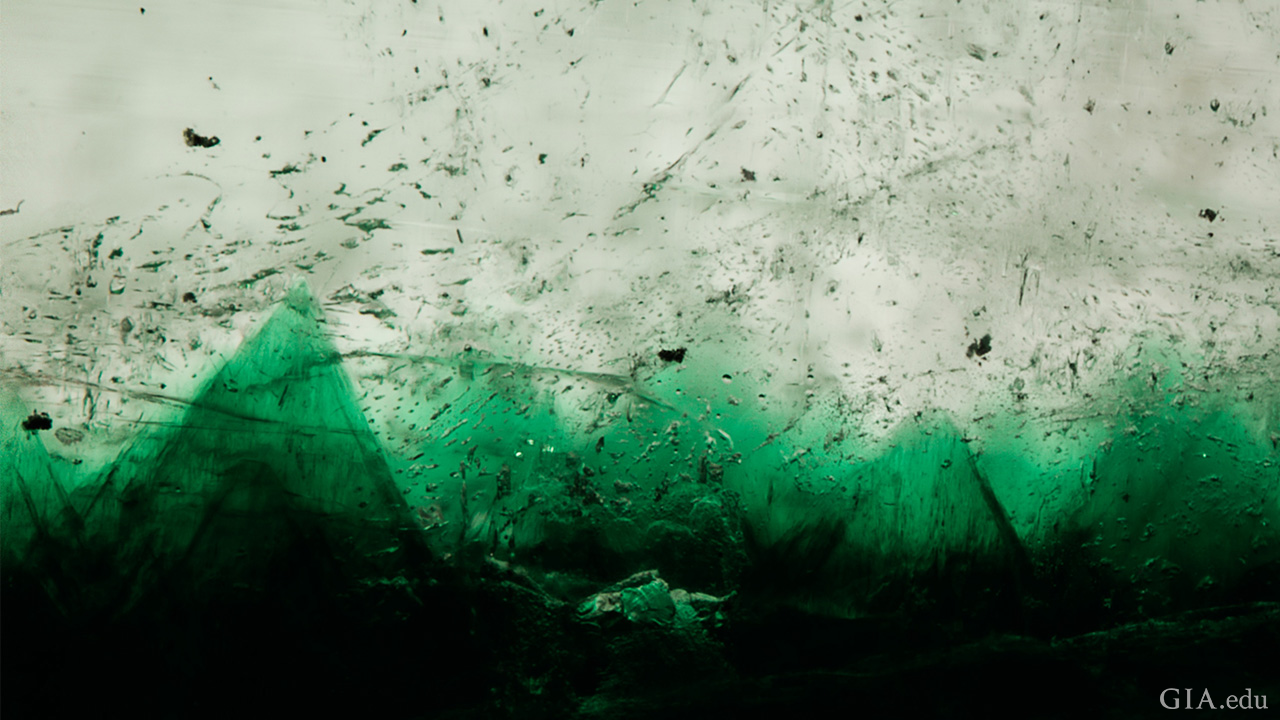 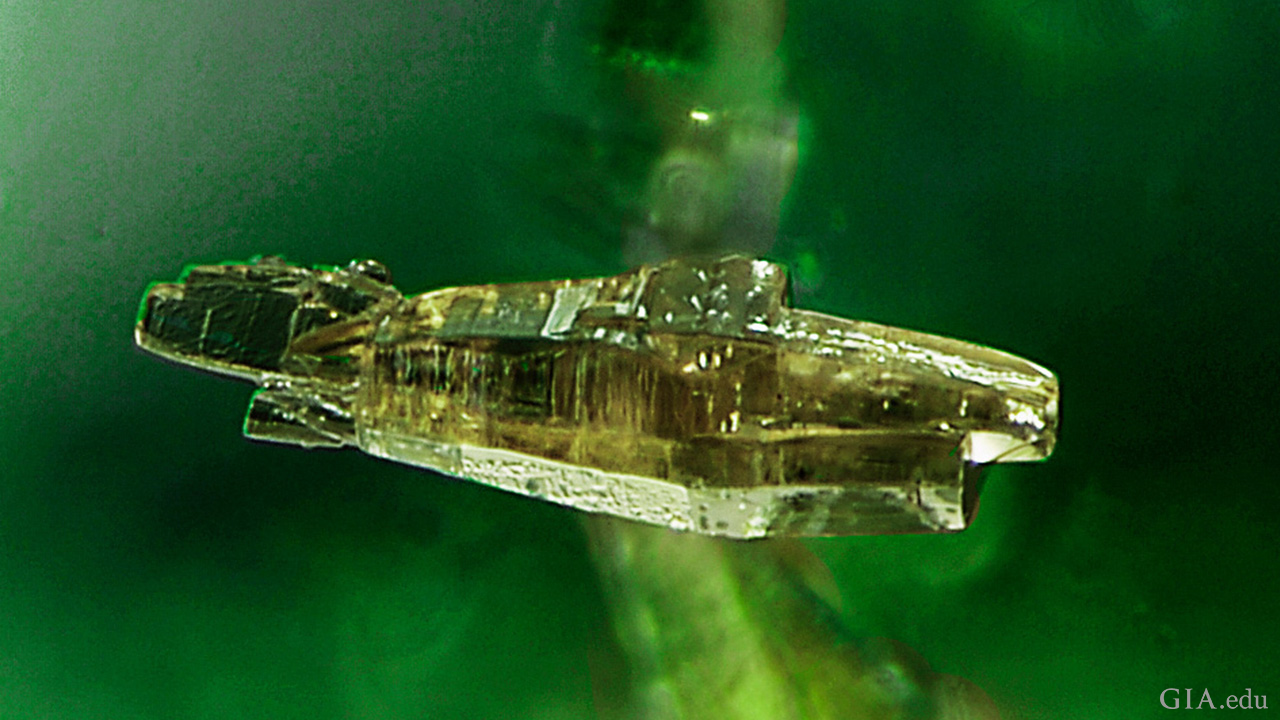 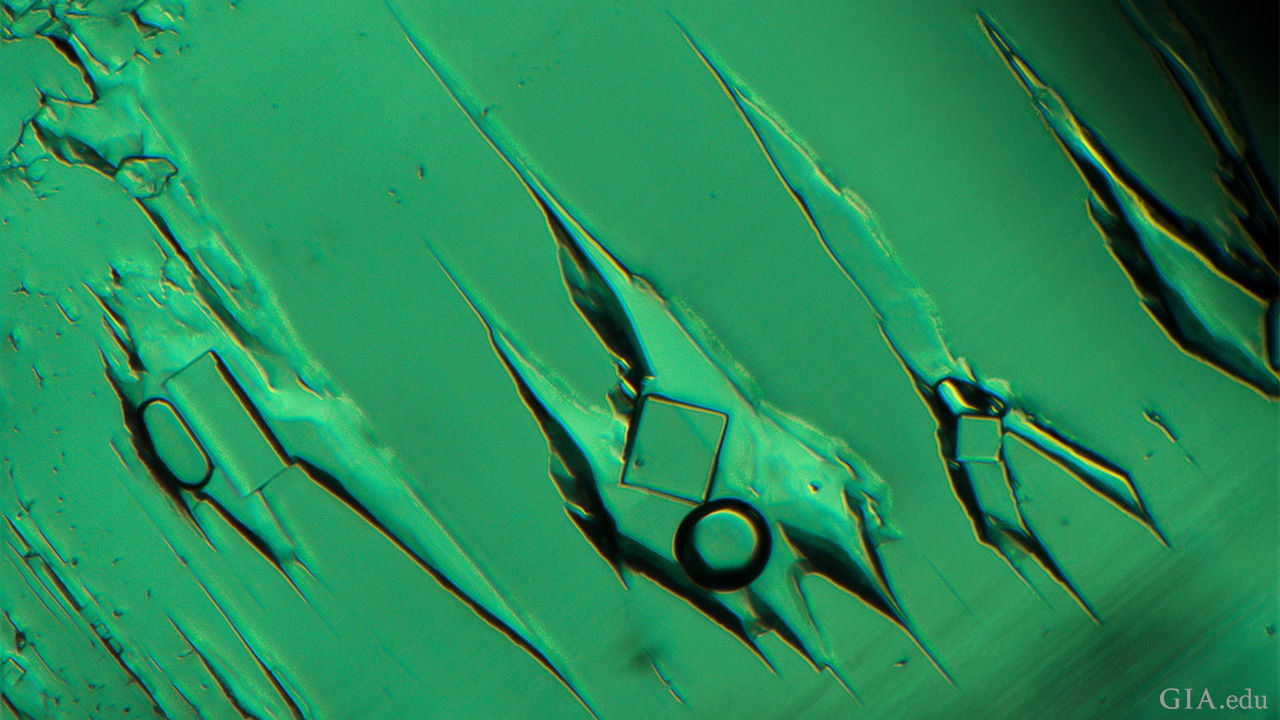 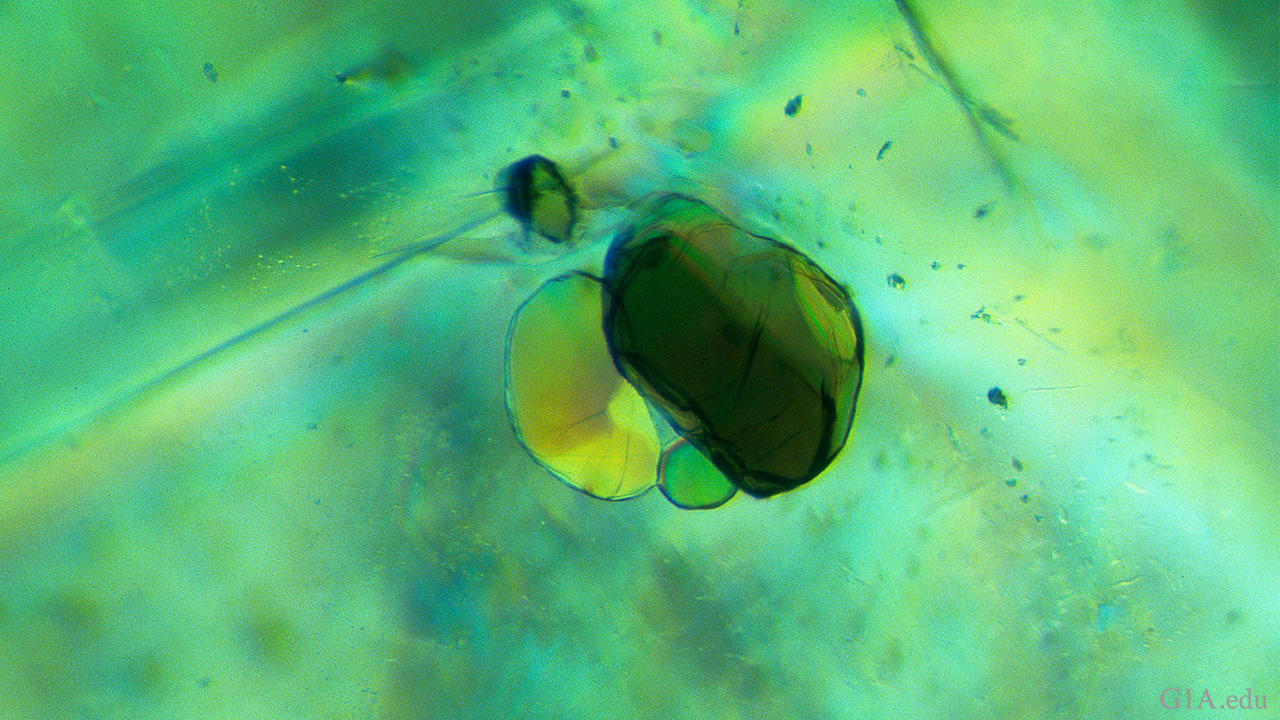 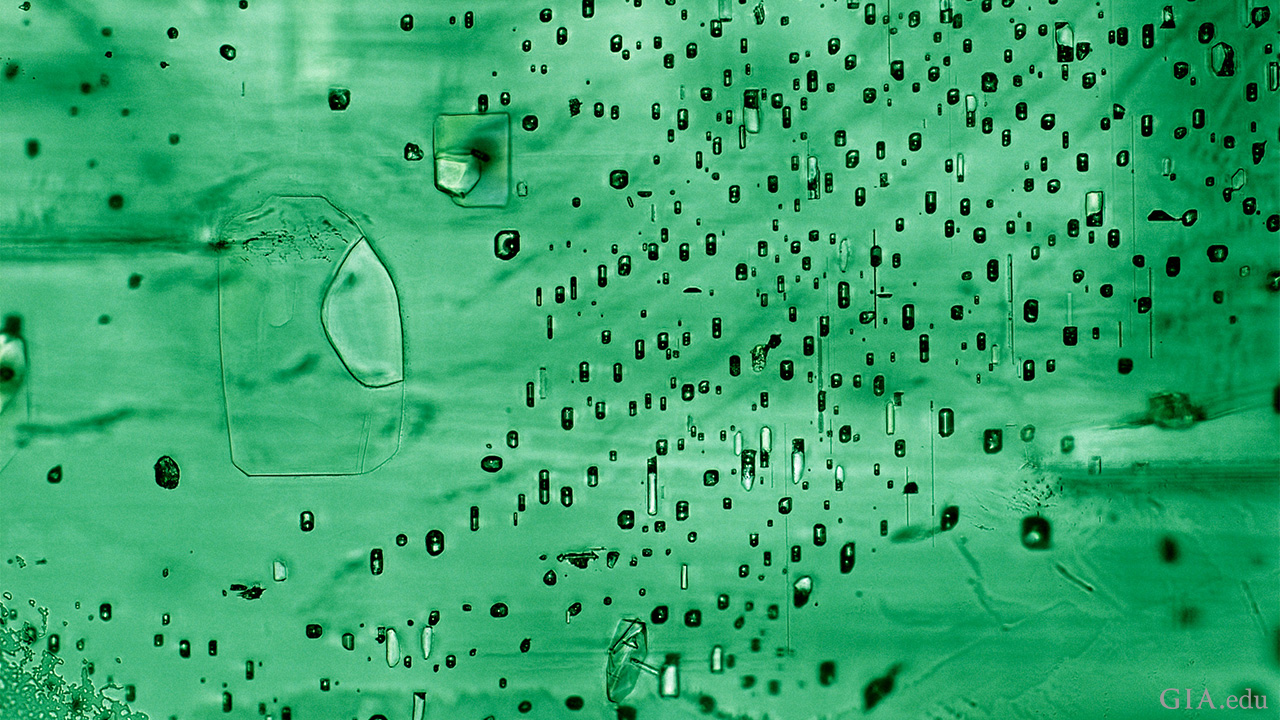 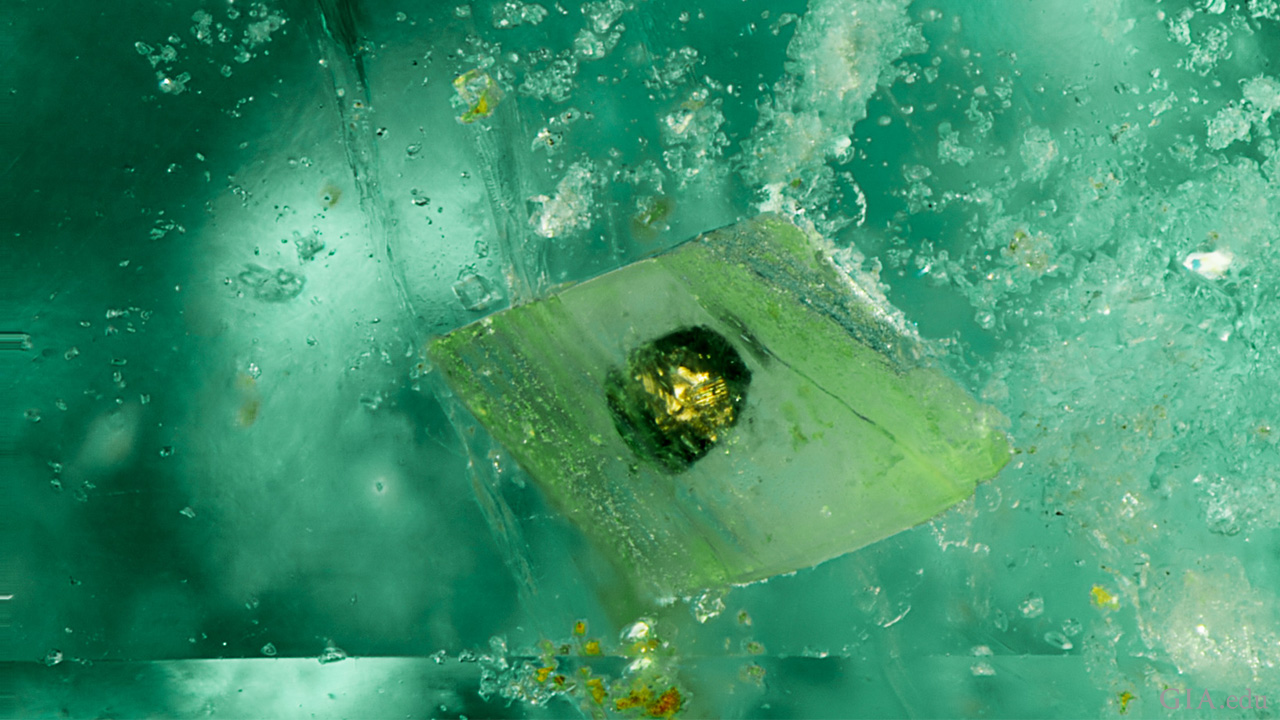 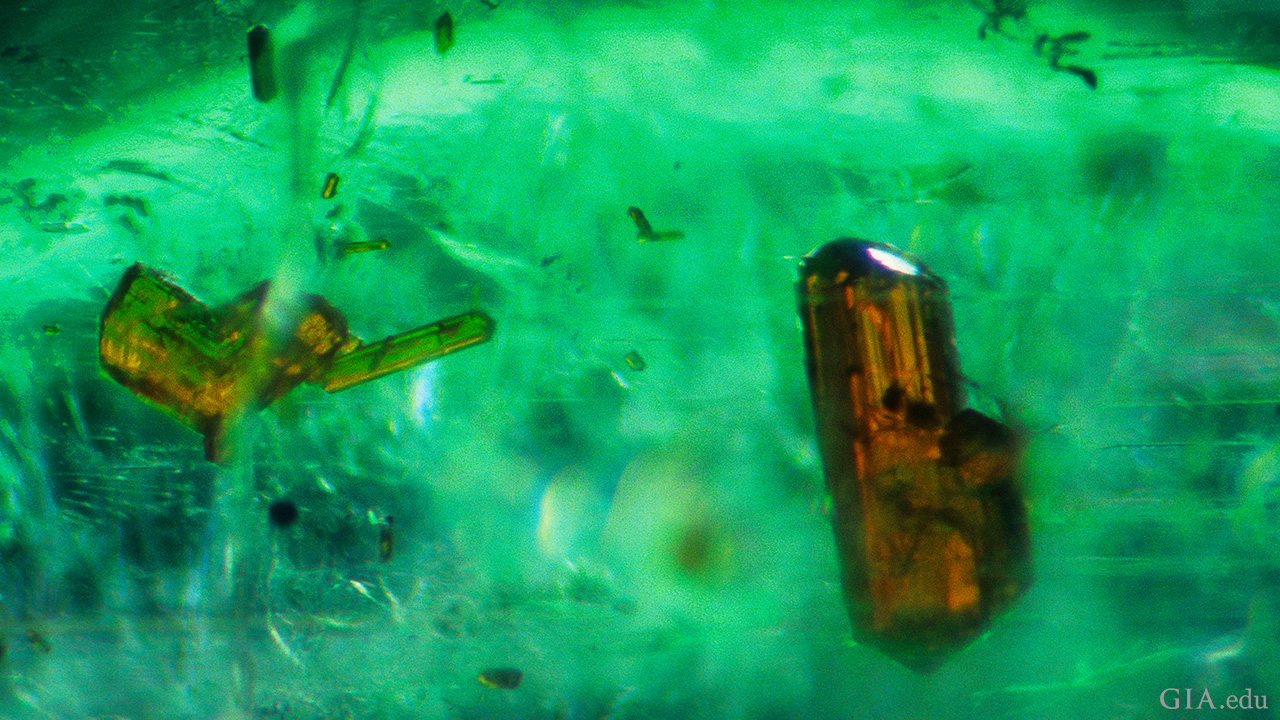 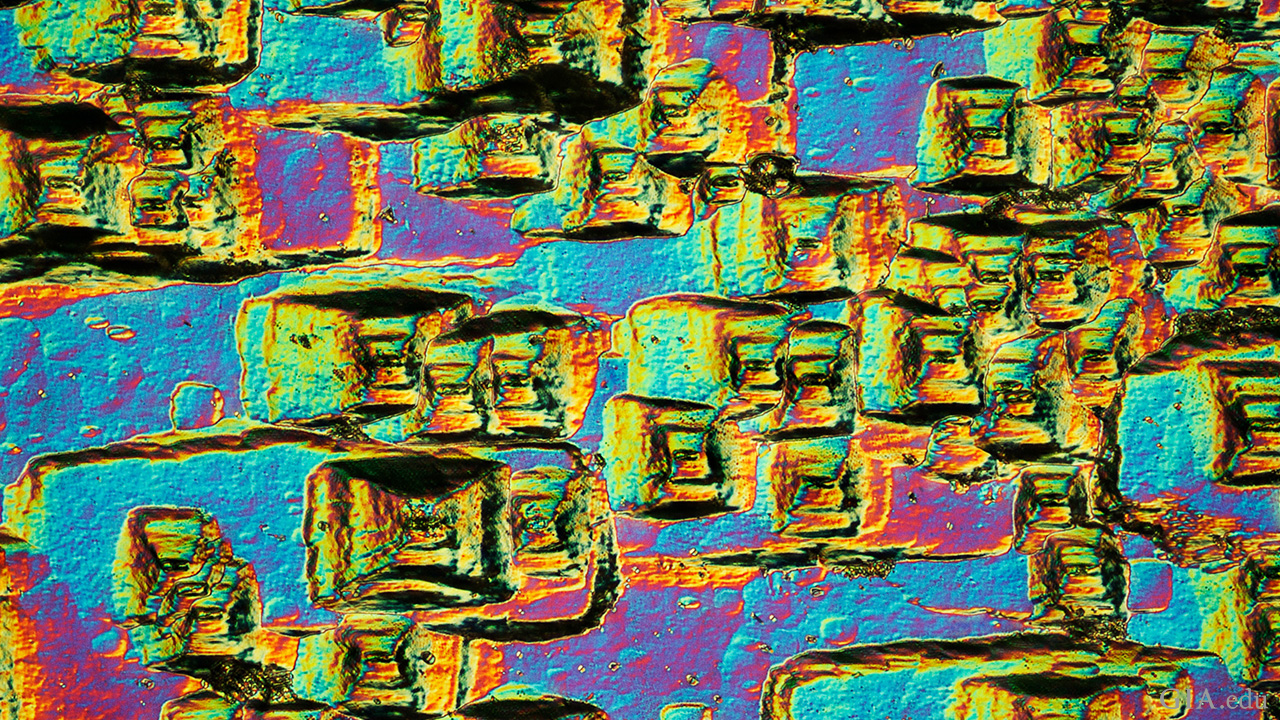 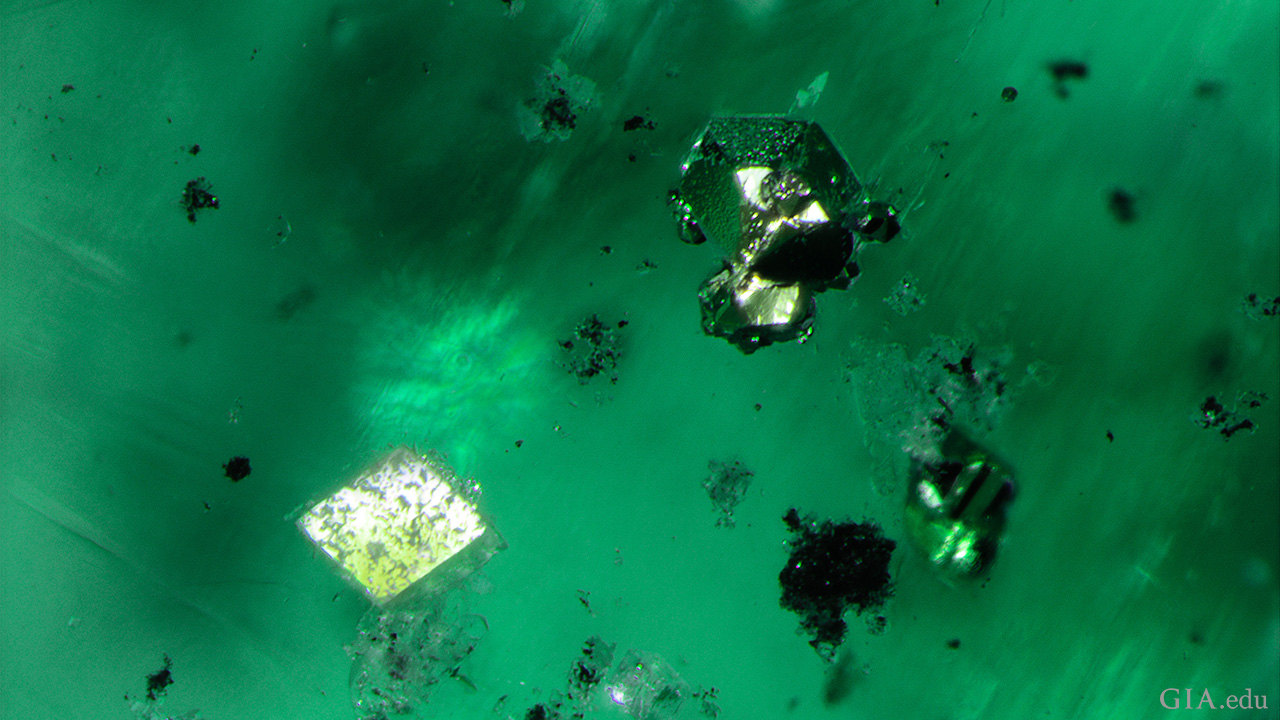 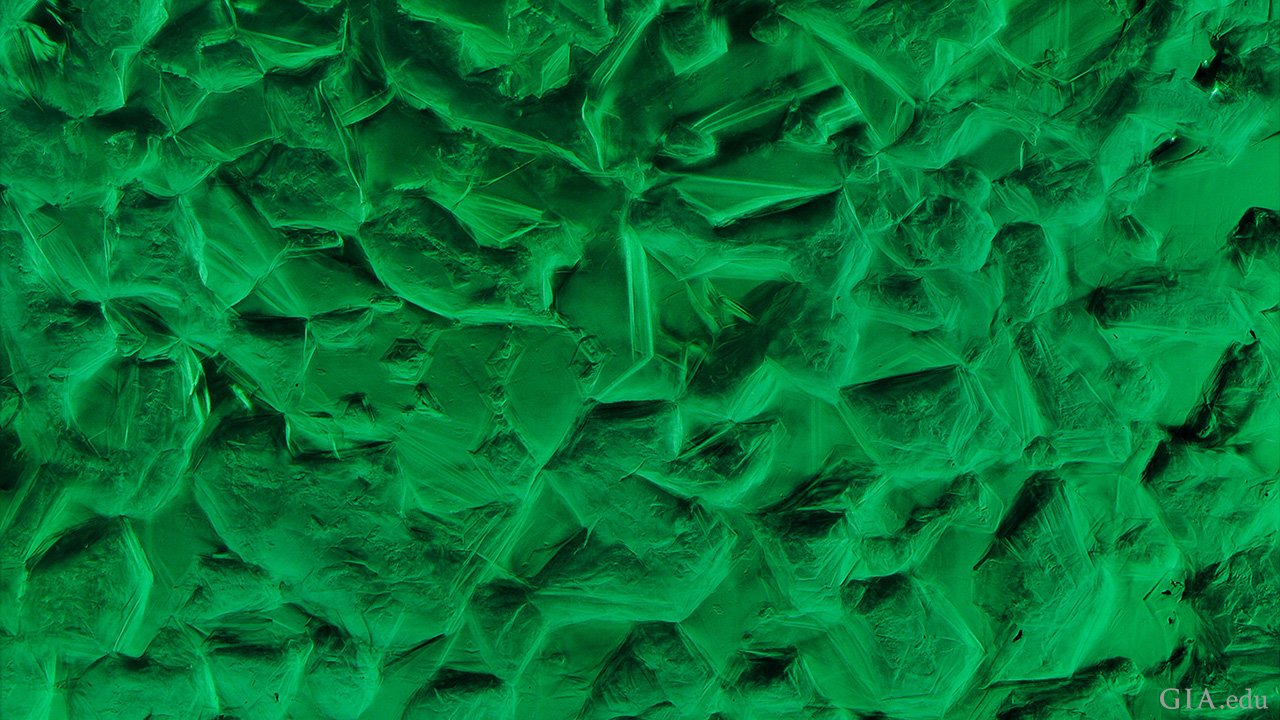 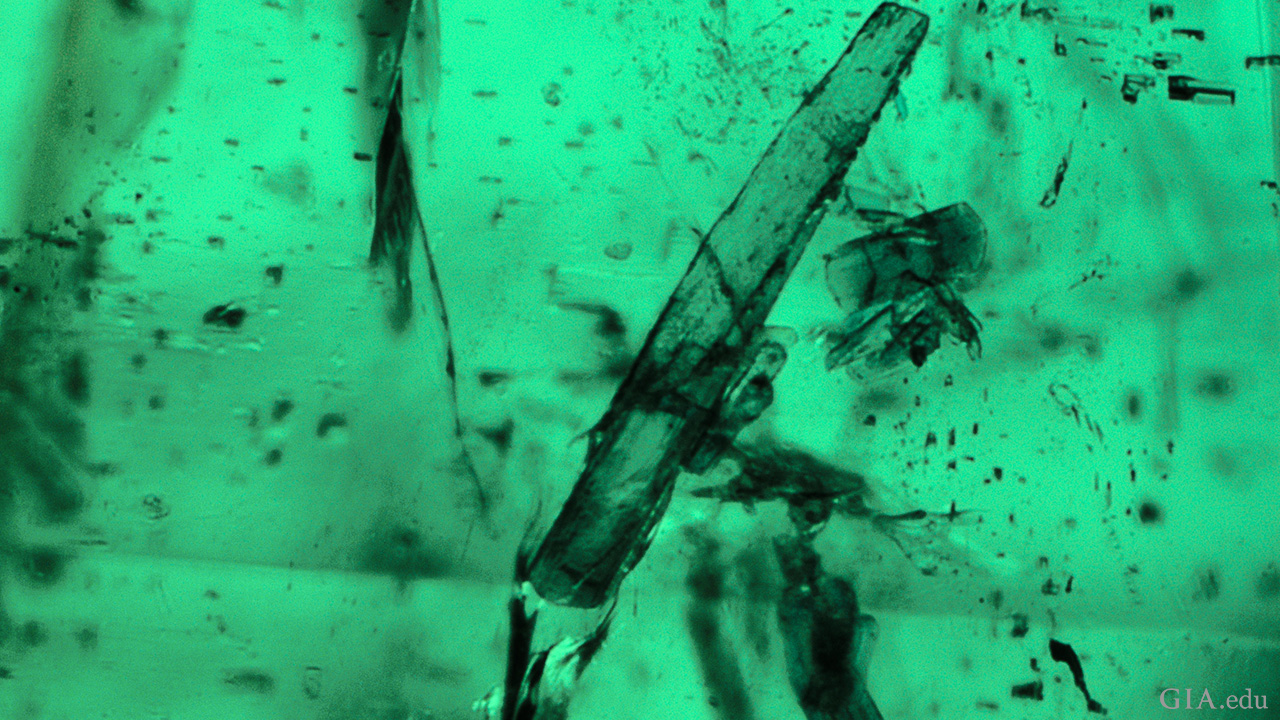 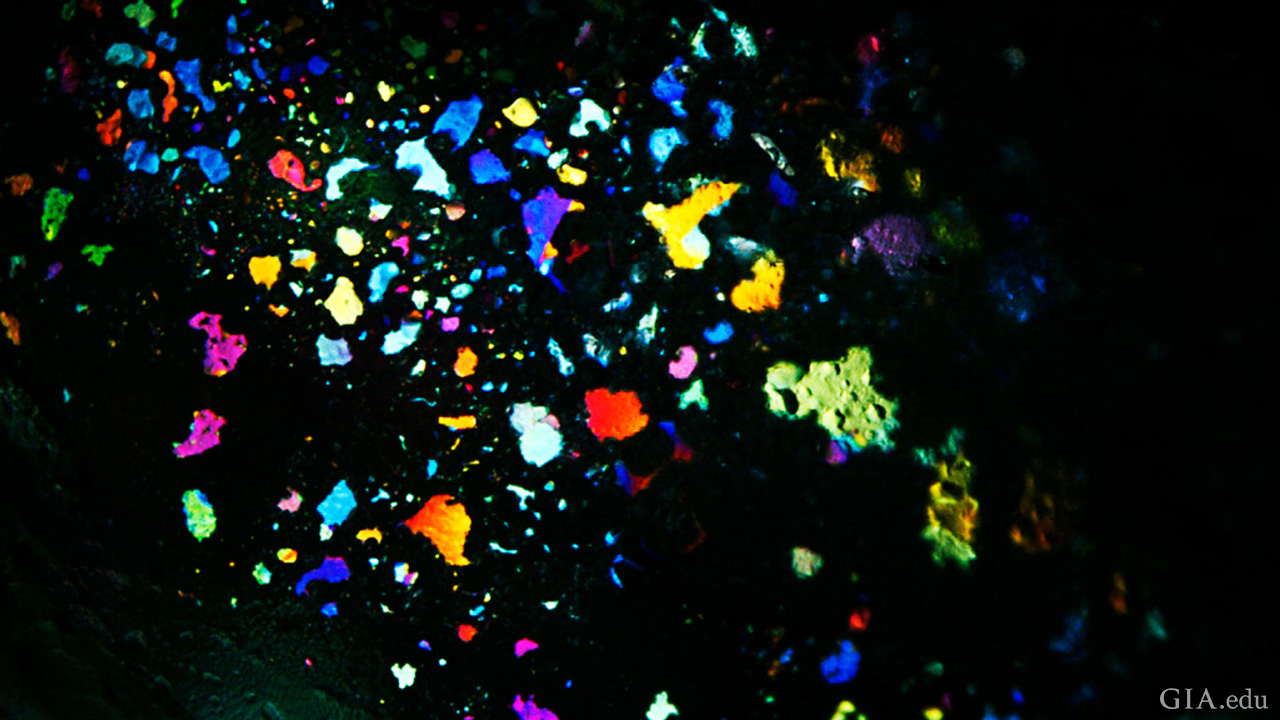 This selection of photomicrographs reveals some of the typical and less common inclusions and other growth features seen in natural emeralds.

With improvements in the design and construction of binocular microscopes in the 1800s, researchers increasingly used this instrument to study the natural world. In the 1940s, the occurrence of inclusions in emerald and other gemstones, and their importance for identification, was the focus of several published articles by Swiss gemologist Eduard Gübelin. The immense value of inclusion studies in gemology is captured by the three-volume Photoatlas of Inclusions in Gemstones by Eduard Gübelin and John Koivula. 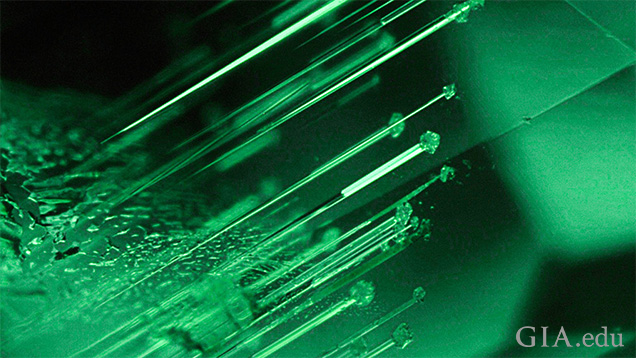 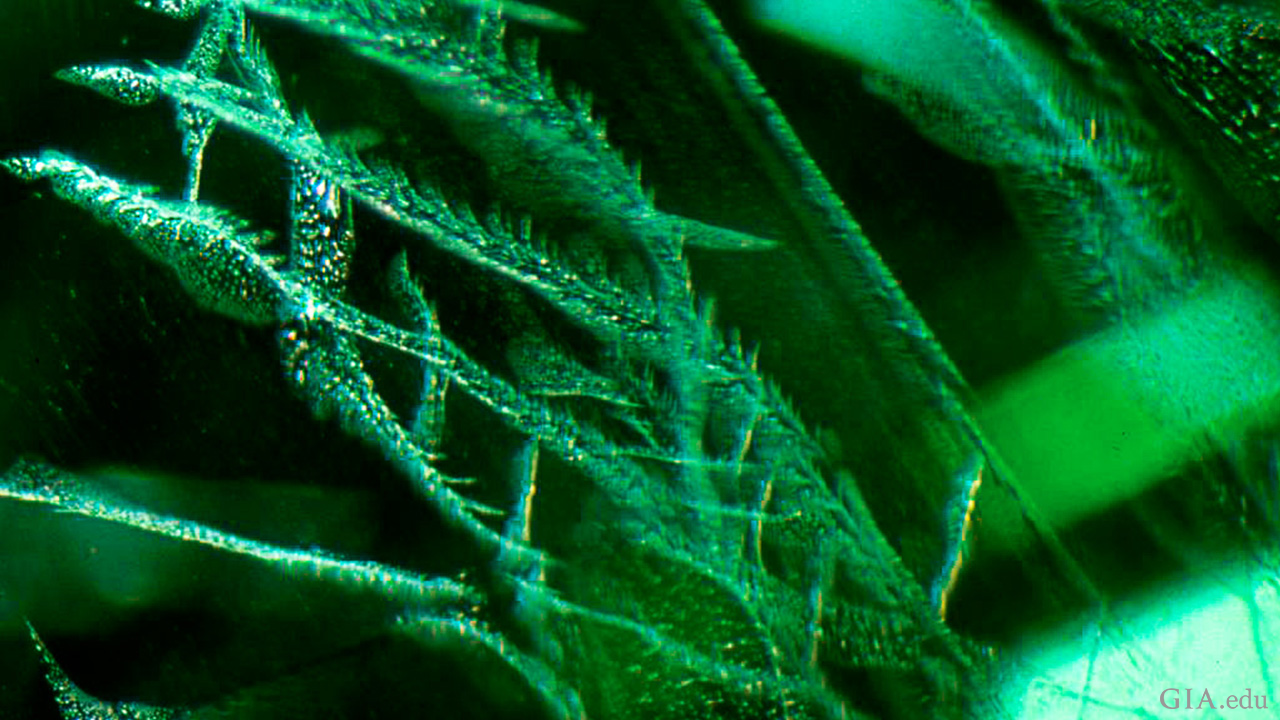 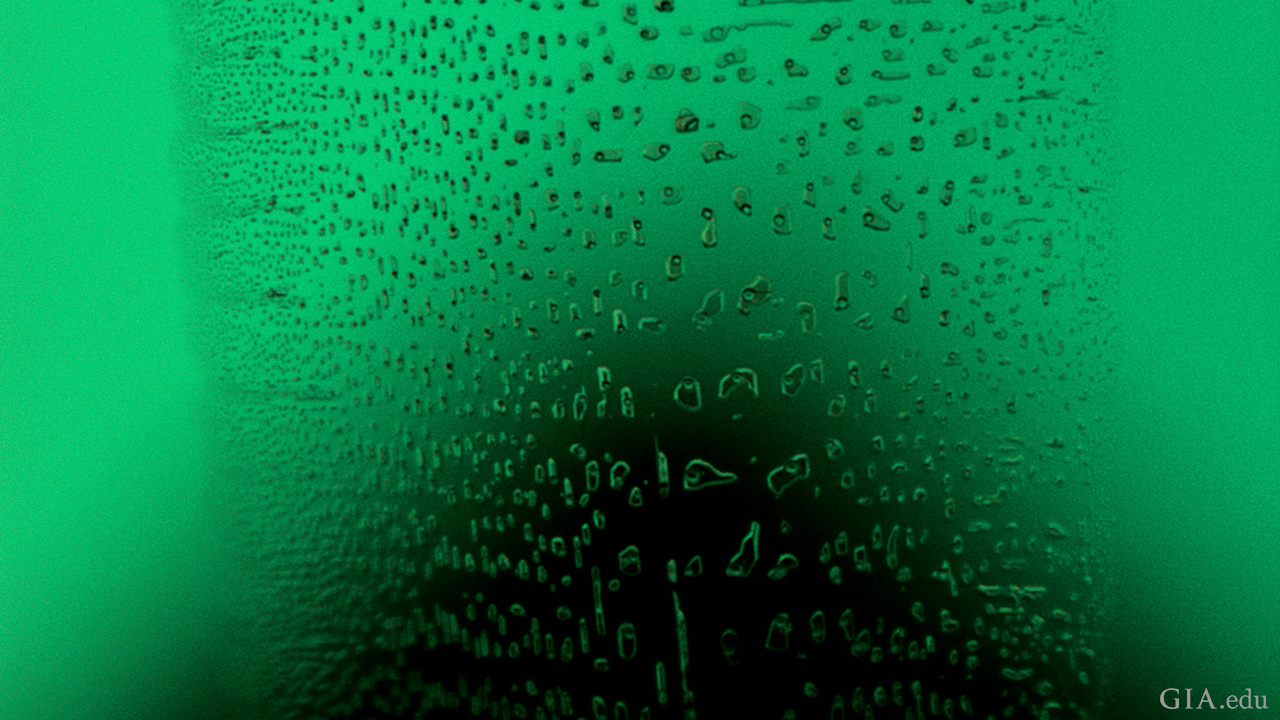 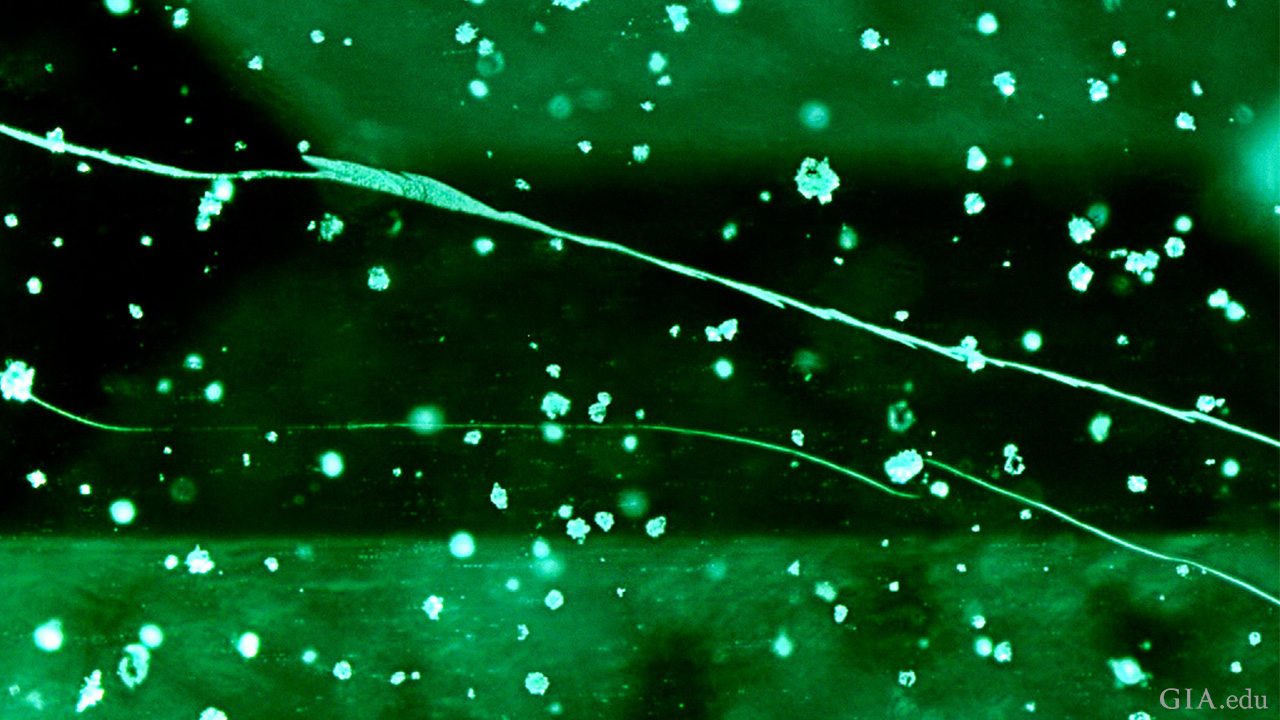 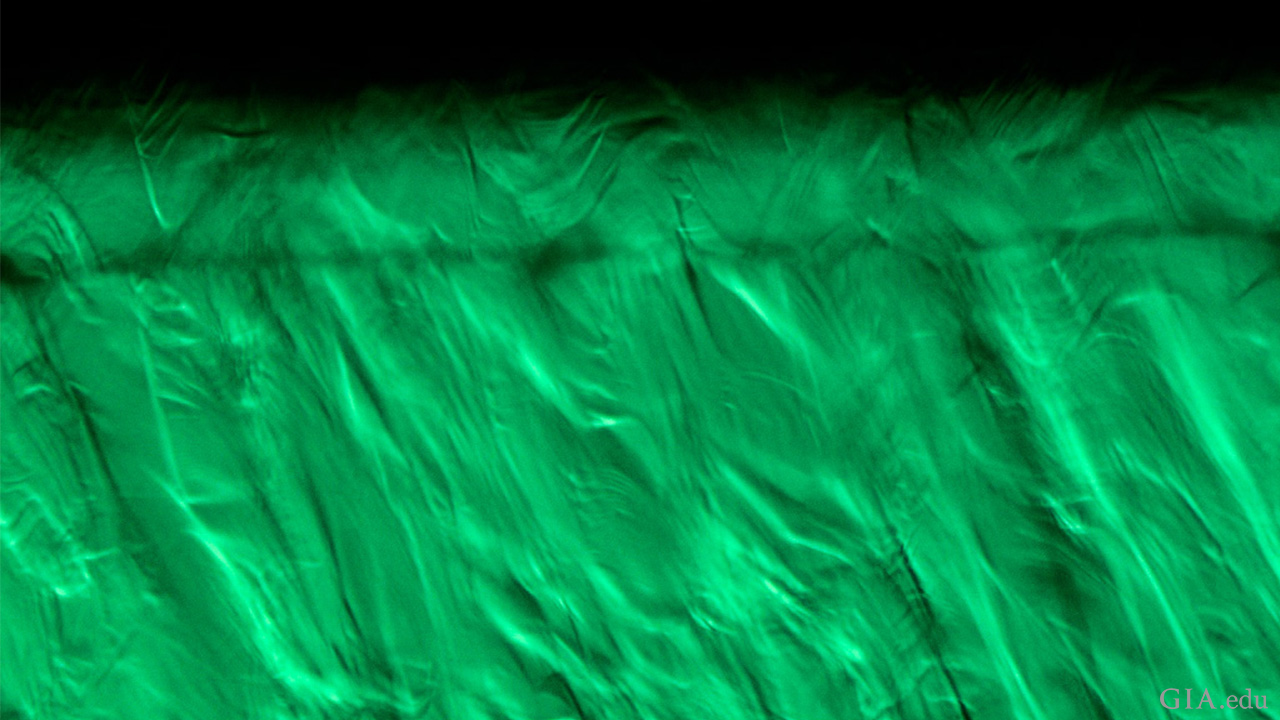 Synthetic emeralds are grown by different methods, and they display different micro-features than those seen in natural emeralds.

Studying emerald inclusions provides insight into their geological formation. Beryllium is a rare element in the upper continental crust, and emeralds form in those unusual environments where Be is brought together with Cr (and sometimes V; see Groat et al., 2008). Important emerald sources include Brazil, Colombia, Madagascar, Russia, Zambia, and Zimbabwe. The principal types of emerald occurrences are sedimentary black shales affected by tectonic faulting and other structures, the contact zones of granitic pegmatites emplaced within silica-poor mafic or ultramafic igneous rocks, and certain metamorphic schists. In each of these environments, the minerals present in the host rocks, and in the rocks that formed at the same time as the emeralds, may be preserved as inclusions. Multiphase fluid inclusions are also typical in emeralds from many sources (Saeseaw et al., 2014). In contrast, synthetic and treated emeralds often display inclusions that are visual evidence of their artificial growth or treatment process. The primary treatment for emeralds is clarity enhancement, in which a material with refractive index similar to beryl’s, such as oil or resin, is introduced into surface-reaching cracks in order to reduce their visibility. Evidence of this treatment often consists of flattened gas bubbles and a flash effect seen when examining the material in a microscope. Similarly, inclusions such as phenakite crystals and roiled growth zoning can offer insight into flux and hydrothermal synthetic emerald genesis. 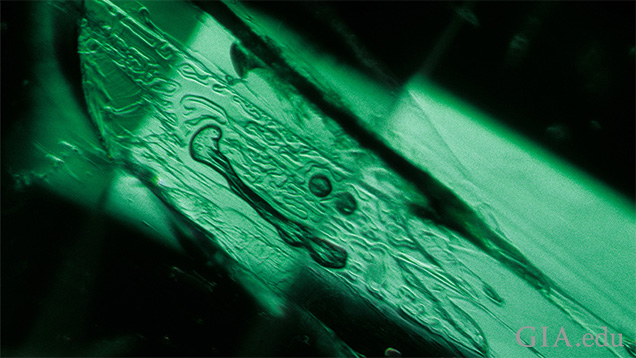 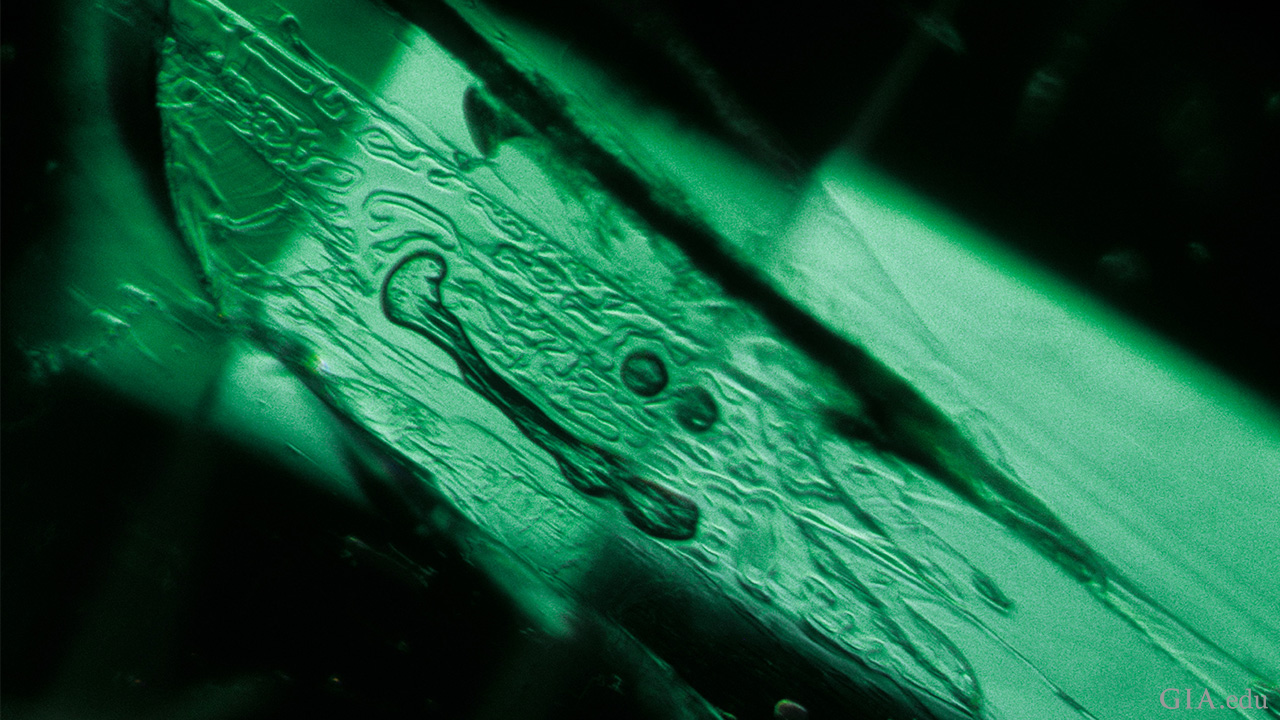 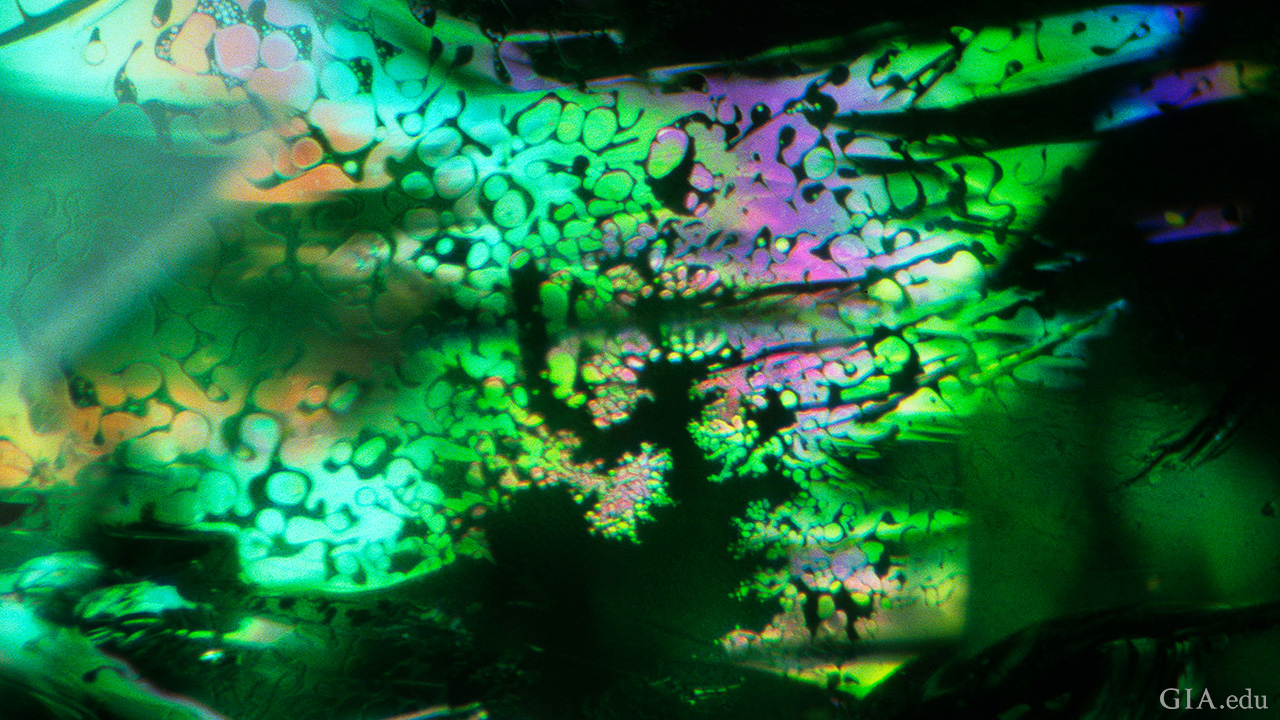 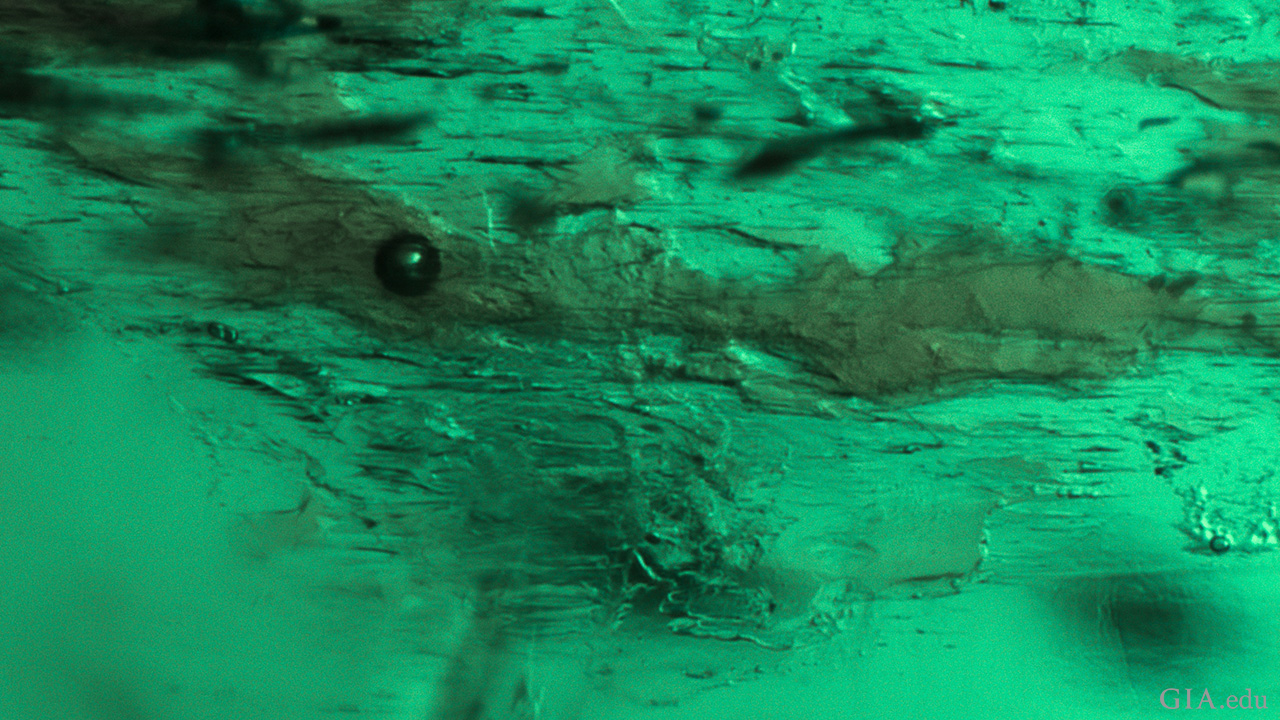 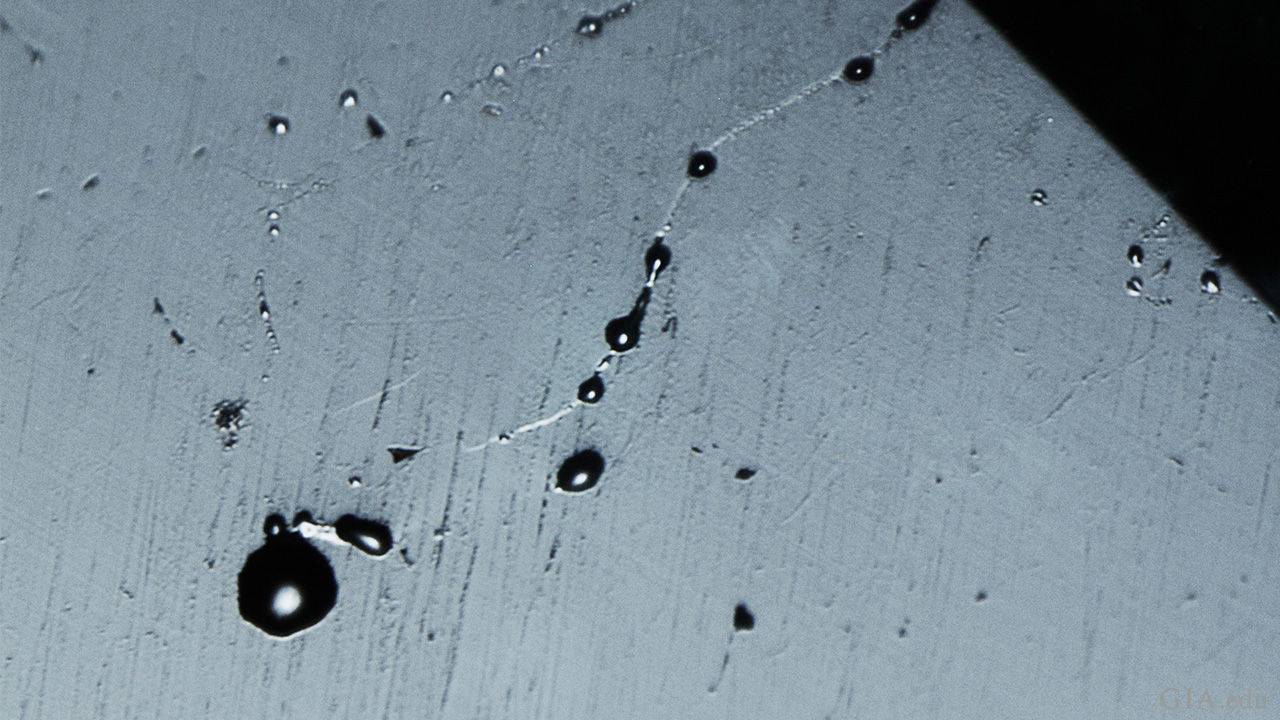 Micro-features seen in emeralds that have been treated by heating, or by filling of open fractures, to improve their color and clarity.

We hope you enjoy this look into the micro-world of emeralds. For more on emerald inclusions, please see our suggested reading list. 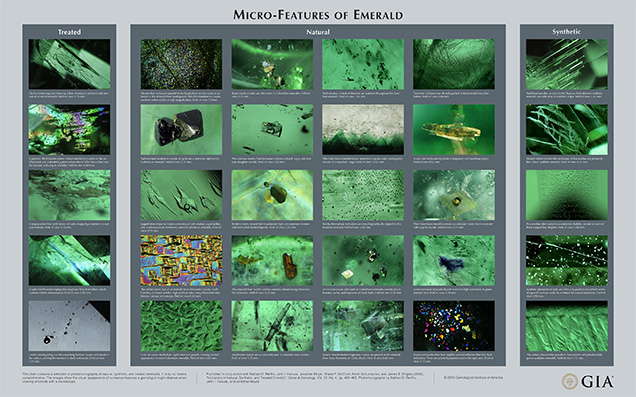 This chart contains a selection of photomicrographs of natural, synthetic, and treated emeralds. It is by no means comprehensive. The images show the visual appearance of numerous features a gemologist might observe when viewing emeralds with a microscope. Photomicrographs by Nathan D. Renfro, John I. Koivula, and Jonathan Muyal.
About the Authors

Mr. Renfro is analytical manager of the gem identification department and microscopist of the inclusion research department, and Mr. Koivula is analytical microscopist, at GIA in Carlsbad, California. Mr. Muyal is a staff gemologist, Mr. McClure is global director of colored stone services, Mr. Schumacher is a digital resources specialist at the Richard T. Liddicoat Library and Information Center, and Dr. Shigley is distinguished research fellow at GIA in Carlsbad.

Provides a visual guide to the internal features of natural, synthetic, and treated diamonds.

Provides a visual guide to the internal features of natural, synthetic, and treated rubies.

This chart combines a comprehensive listing of the commercially available treatments for the most commonly used gem materials with an indication of the current status of their detectability.