Yellow Gemstones: Can You Identify Them?

Sunshine, lemons and a variety of flowers share the color yellow and often evoke feelings of happiness, warmth and optimism. A variety of gemstones also come in shades of yellow, from diamonds to citrine to garnets.

Yellow diamonds are enduring in quality and value and popular set in jewelry. Yet a treasure trove of other yellow gemstones exists at reasonable price points. They can be found in light-toned shades to rich, warm hues.

The most plentiful yellow gemstones in the marketplace are citrine, sapphire, topaz, tourmaline, and transparent opal. Other varieties include yellow andradite garnet, spessartine and Mali garnets, beryl, sphene, zircon, spodumene and transparent varieties of labradorite and orthoclase feldspar. Less abundant or collectible yellow gems include chrysoberyl, sphalerite, apatite and prehnite.

Many yellow gemstones can resemble one another in color. Can you see the subtle differences in the yellow gemstone pairs? They appear similar, but are different species. 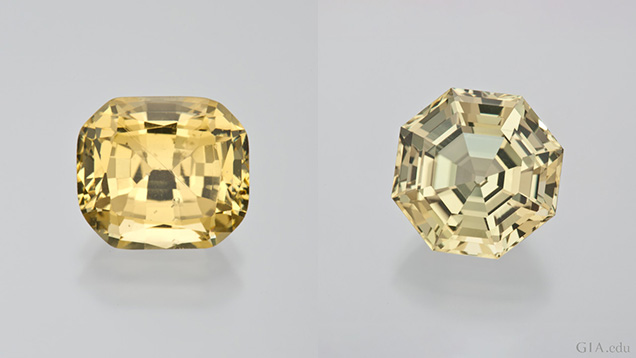 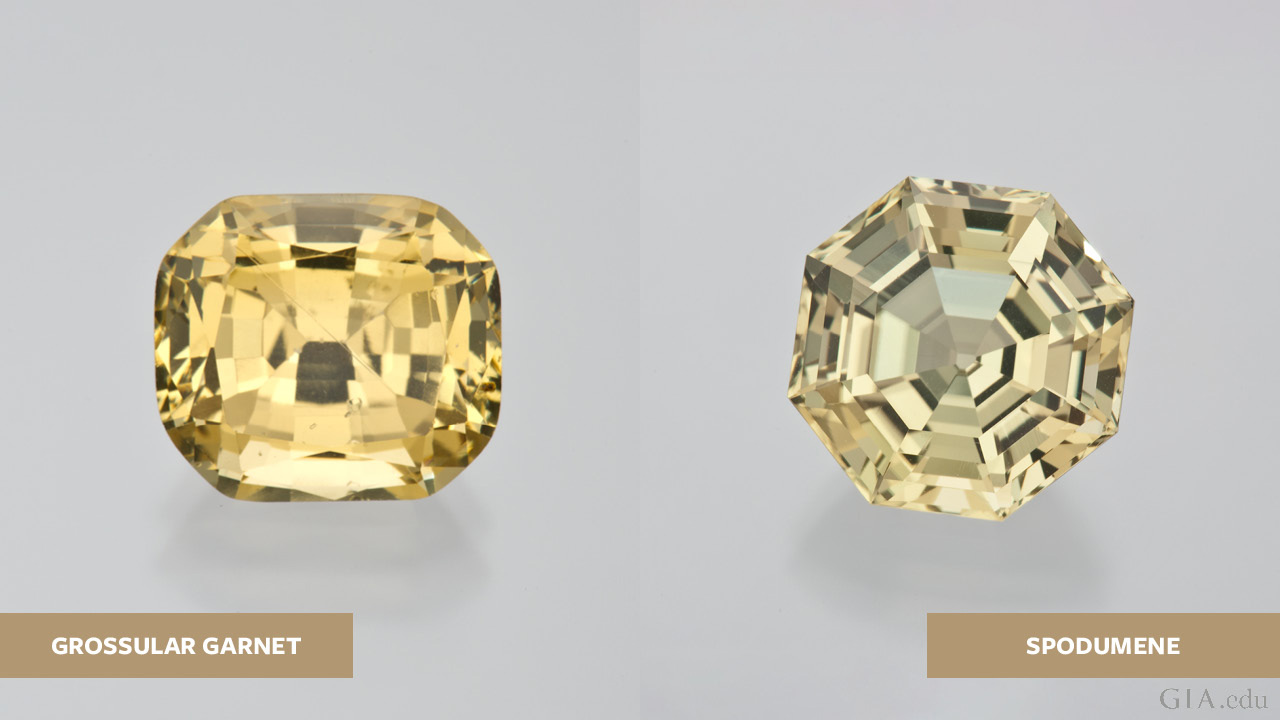 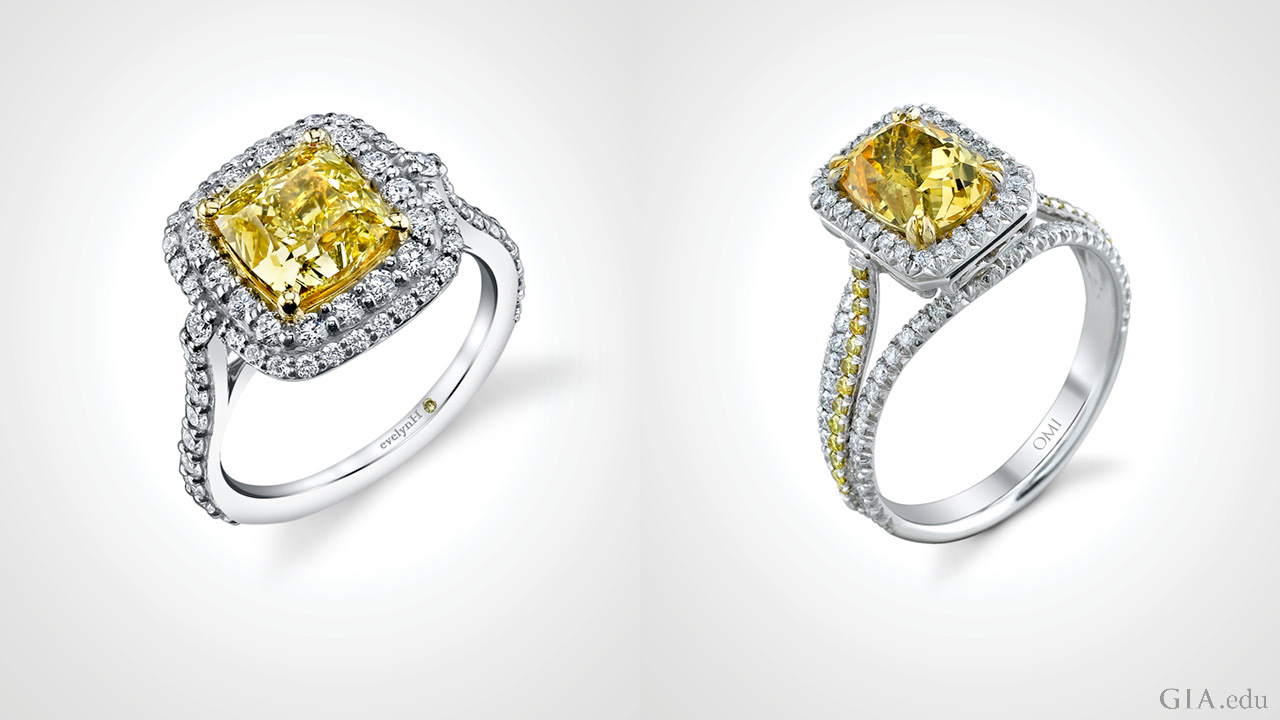 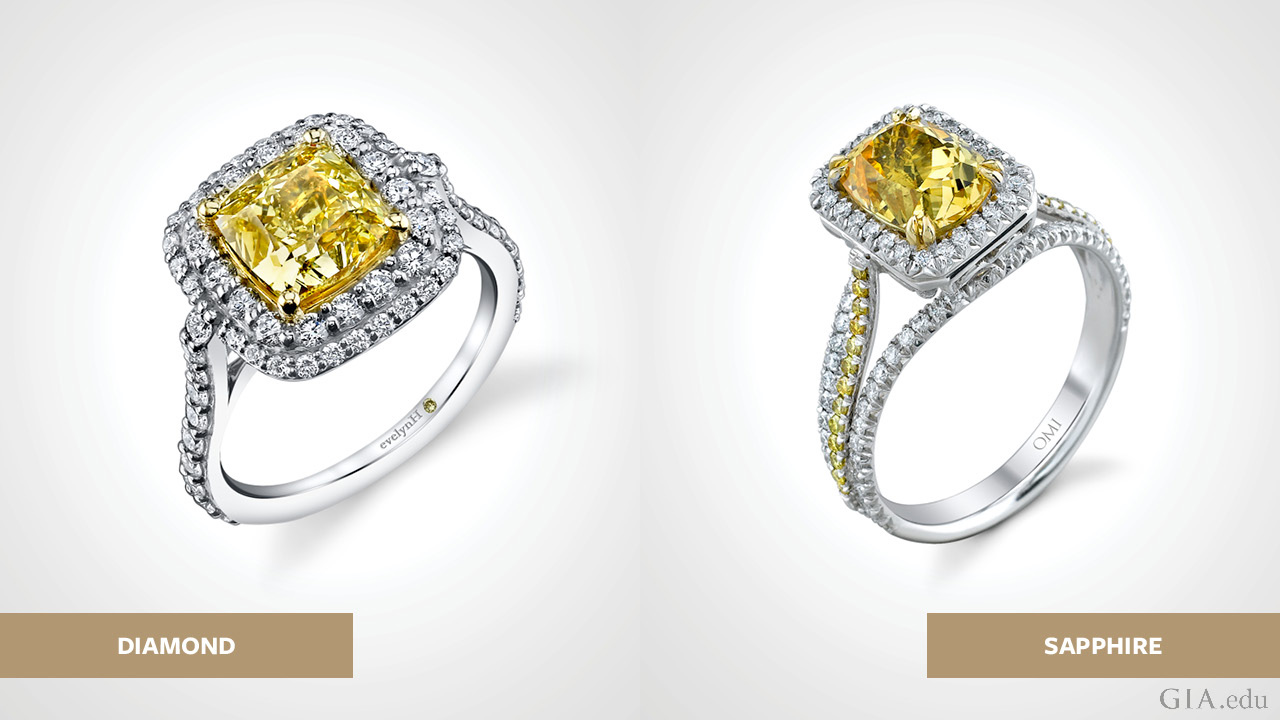 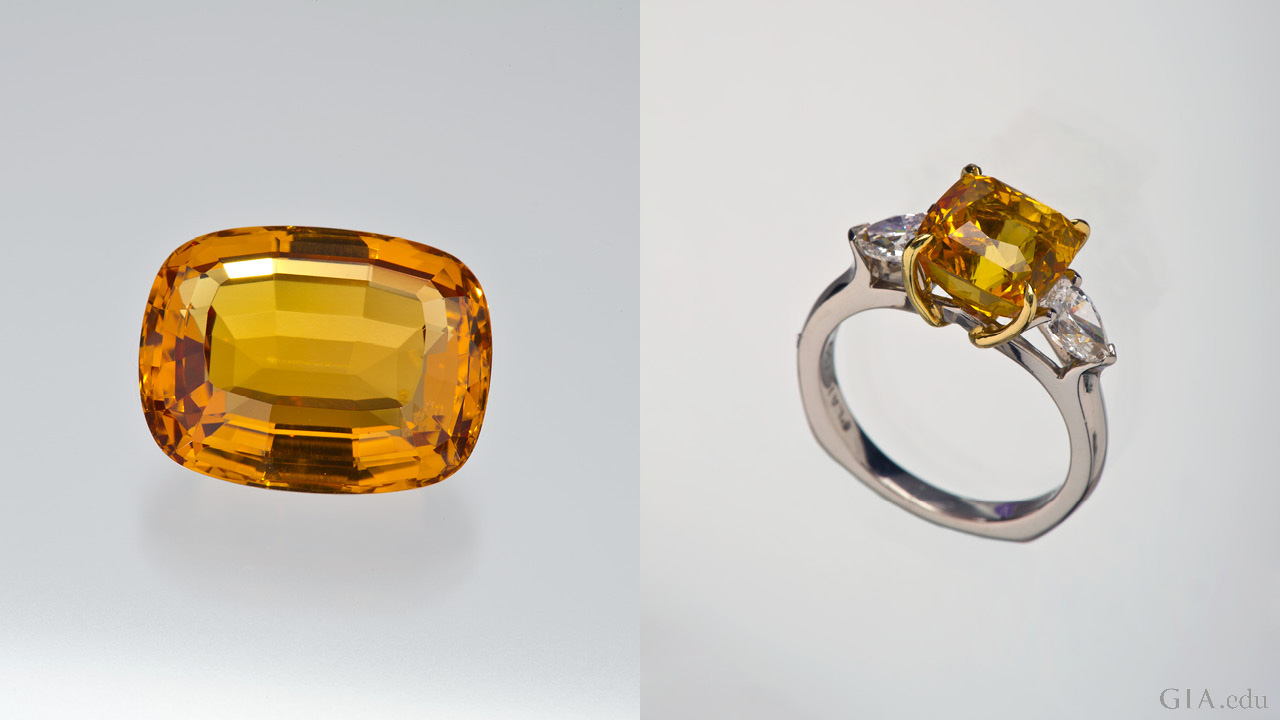 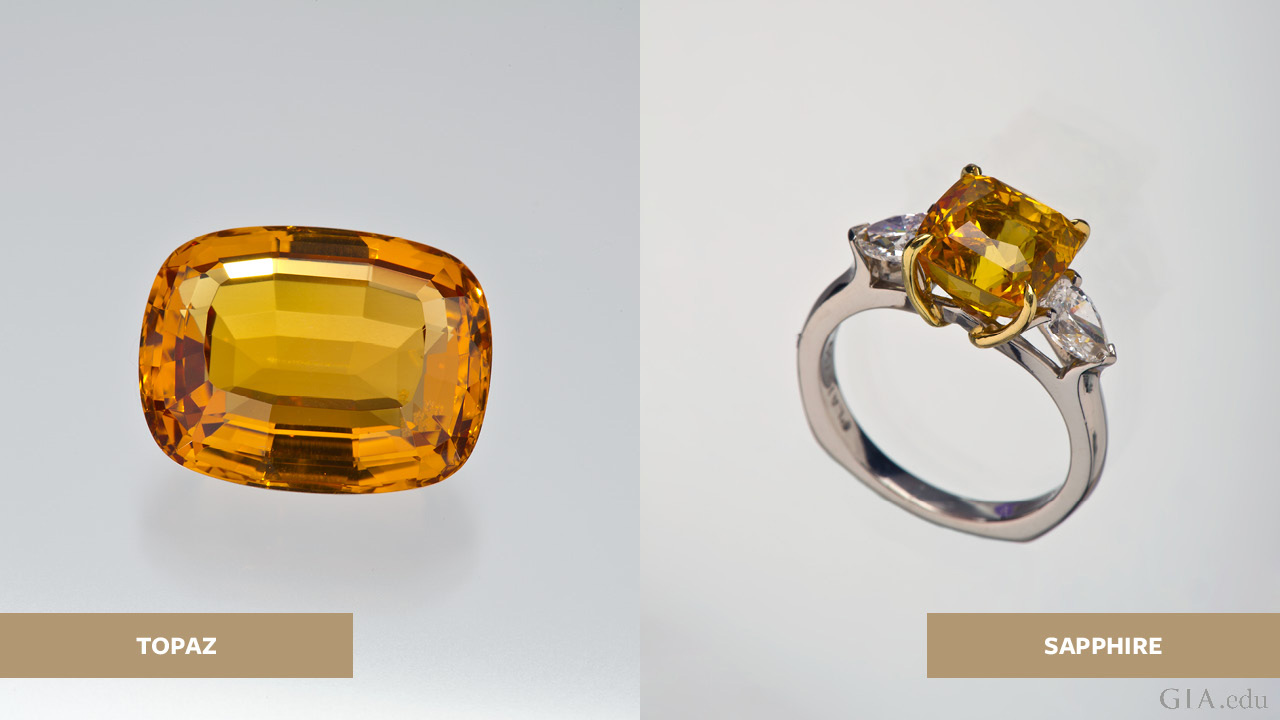 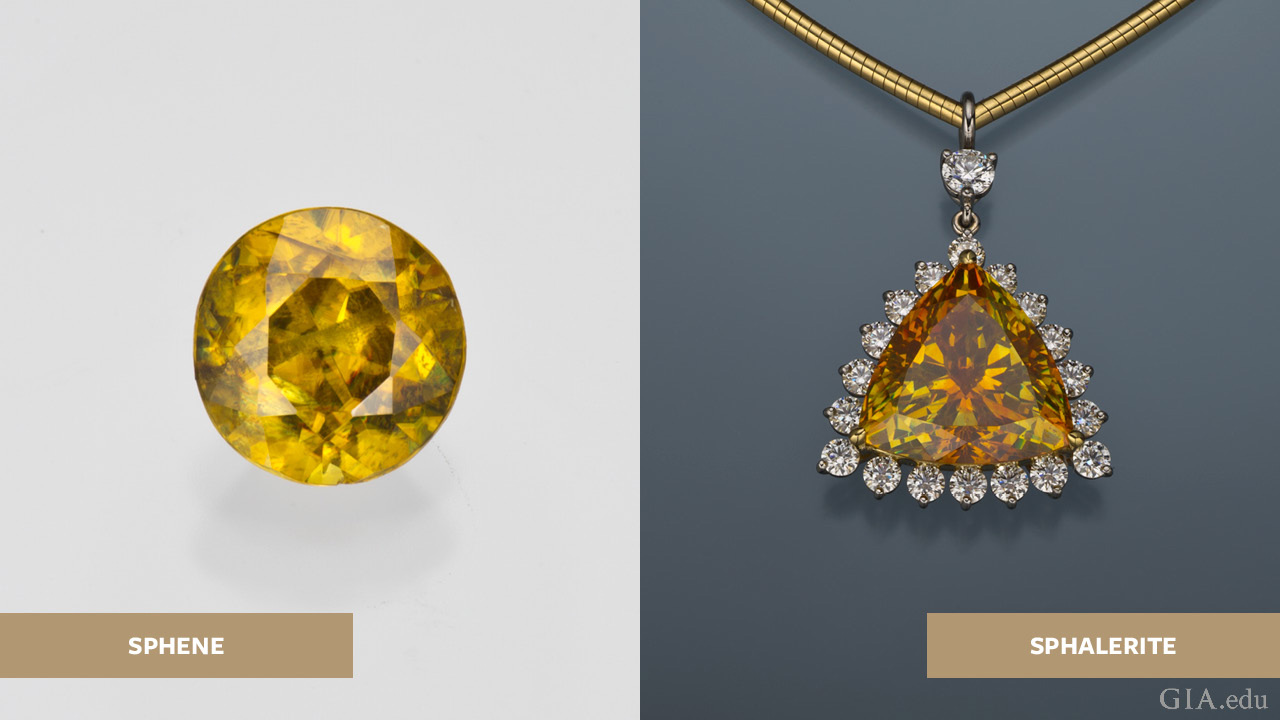 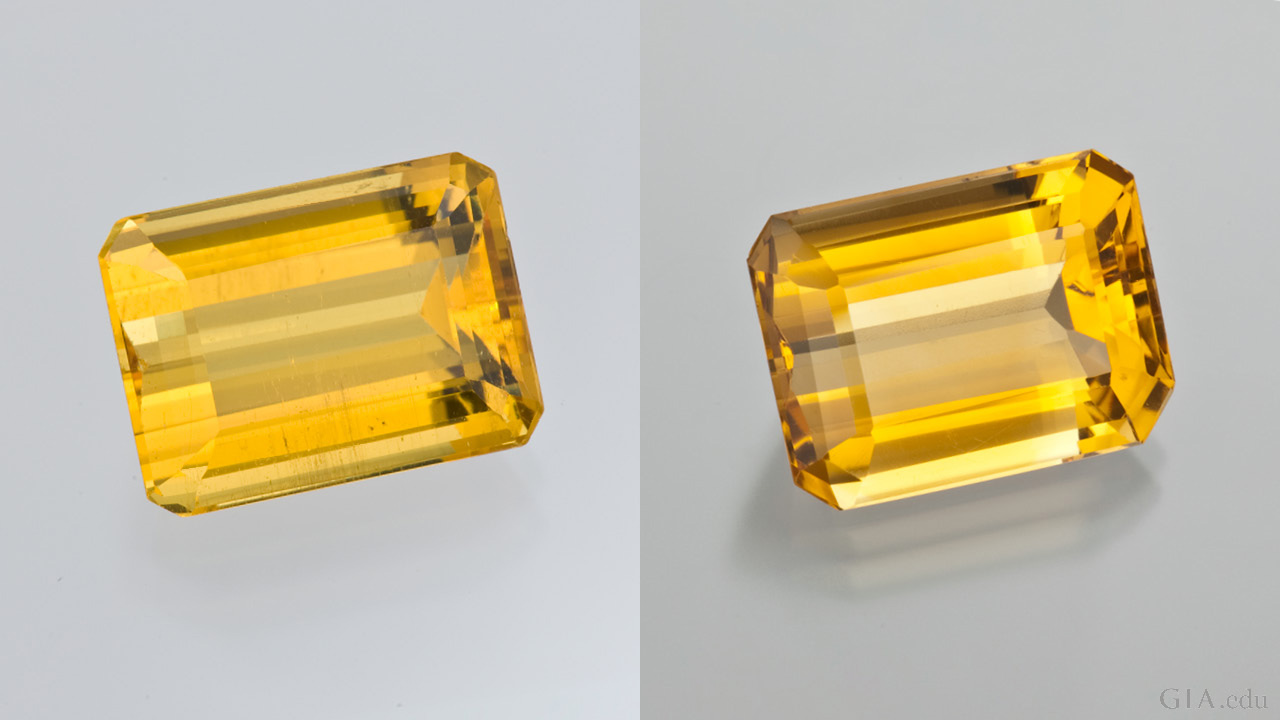 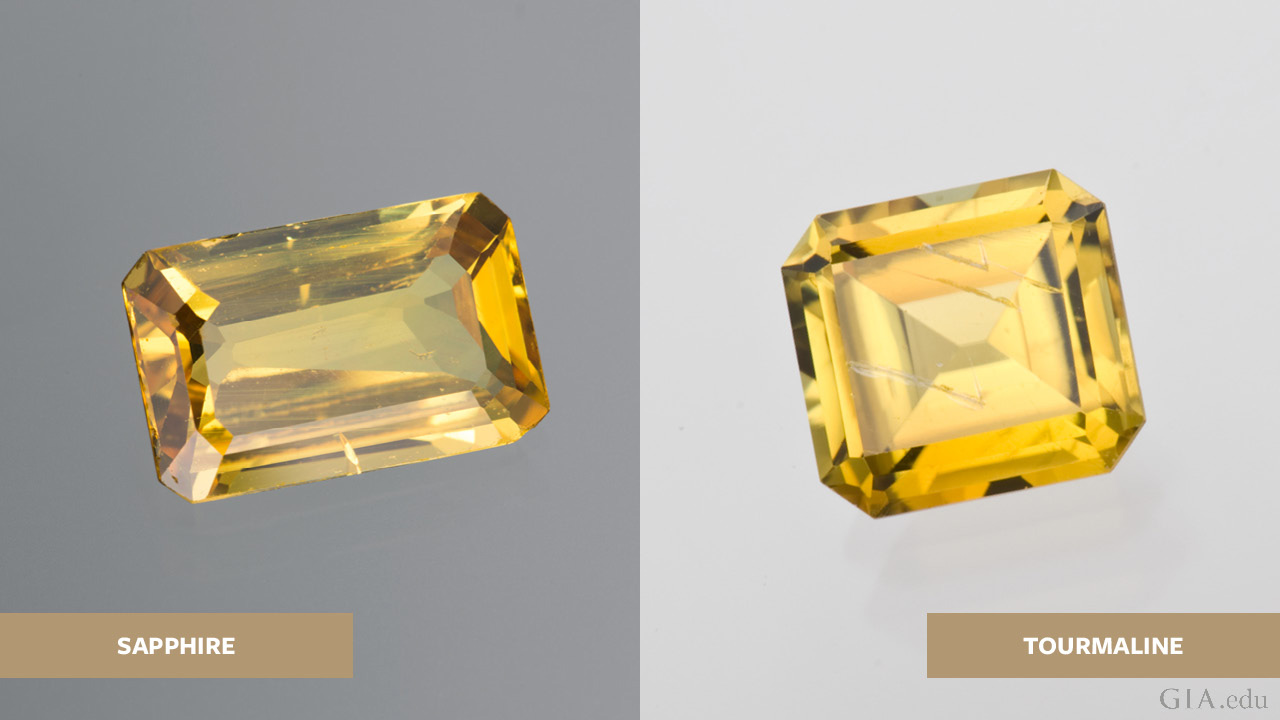 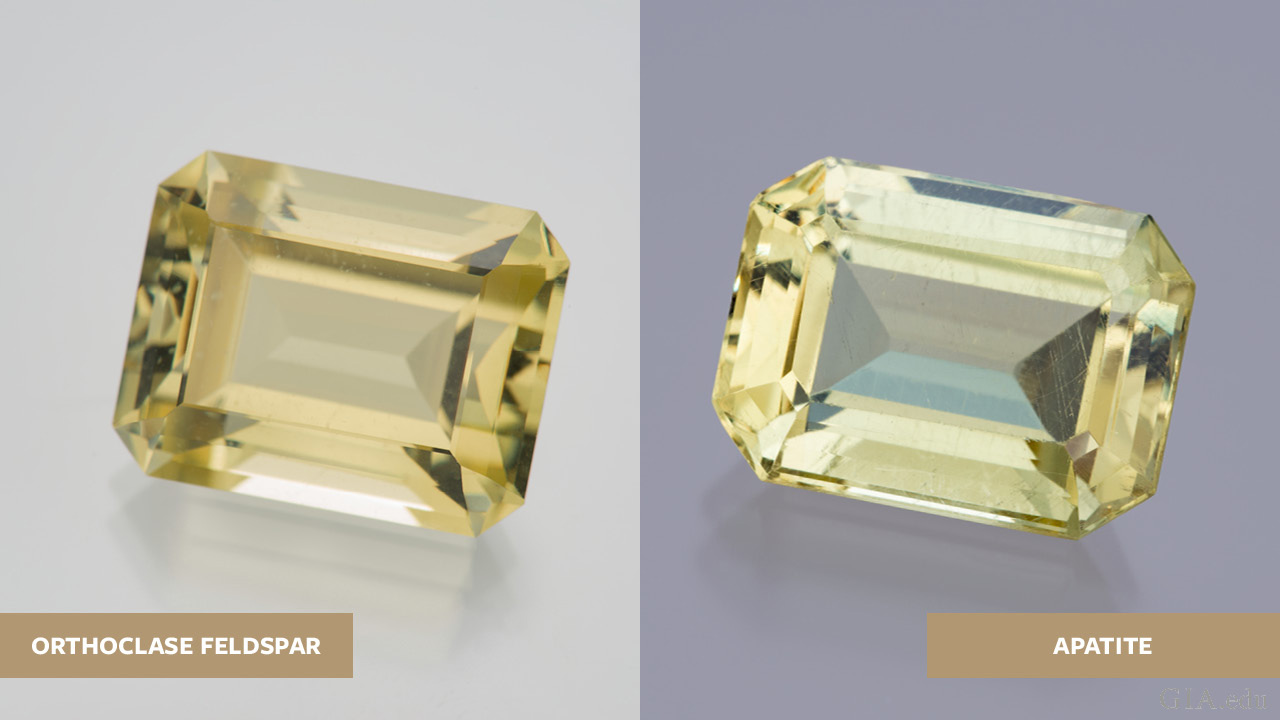 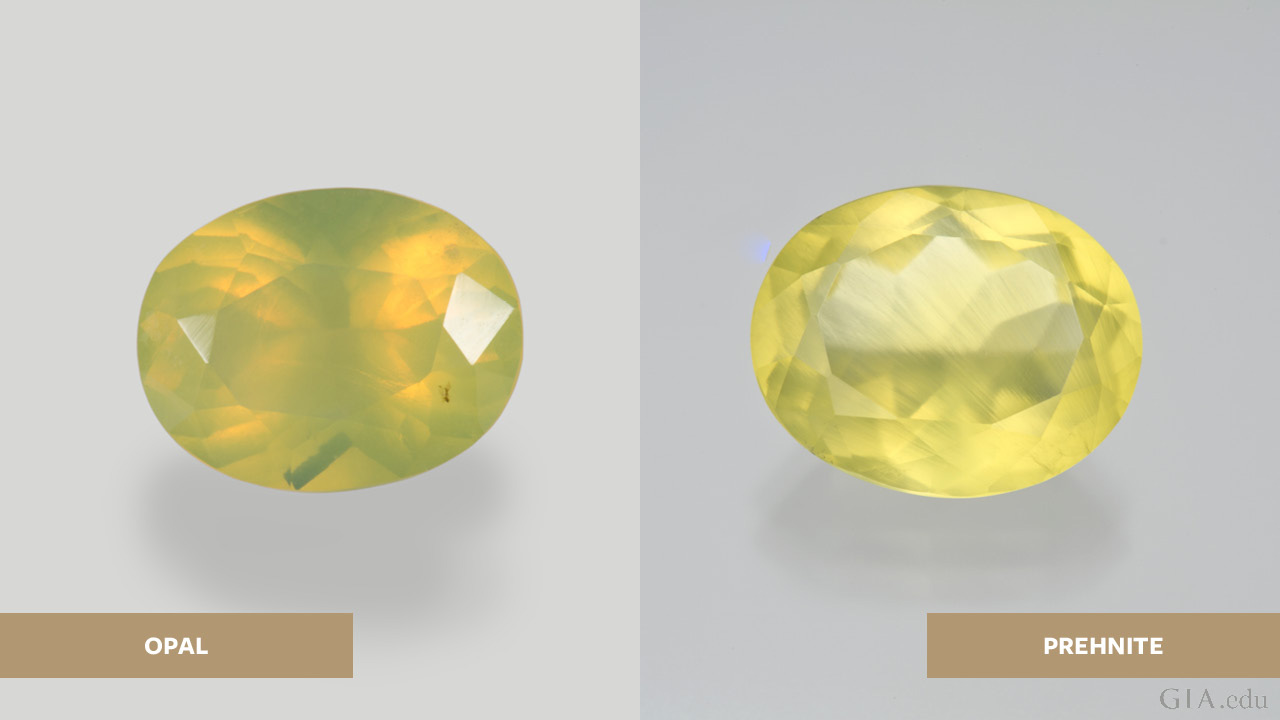 Yellow is the most abundant color of natural fancy diamonds, yet they still represent a very small percentage of all diamonds. The first major source of yellow diamonds was found in the late 1860s in Cape Province, South Africa, so in the jewelry trade, these yellow diamonds came to be known as “cape” yellow diamonds.

The cut fancy yellow “cape” diamond, front, is a gift of Safdico USA, Inc. The “cape” yellow diamond hexoctahedron rough, back, is a gift of the Sir Oppenheimer Student Collection. Composite photo by Orasa and Robert Weldon/GIA

“Cape” diamonds, according to the “GIA Diamond Dictionary,” are a Type Ia diamond with a distinct yellow body color that exhibits absorption that falls in a specific and defined pattern. (There is often a strong band at about 415.5 mm and a fairly strong one at 478.0 nm, with four weaker lines between the two.) Such diamonds may also fluoresce blue, yellow, or orange.

What is the cause of the yellow color in diamonds?

“In general, the presence of nitrogen atoms gives rise to two kinds of absorption in the blue region of the visible spectrum; the remainder of the spectrum is transmitted, leading to an observed yellow color,” according to GIA’s diamond color expert John King.

The color of this 9.05 ct Fancy Vivid yellow diamond is evenly distributed throughout the face up appearance of the stone. Courtesy of B. Najjar. photo by Robert Weldon/GIA

Canary is a historic term for a Type Ib fancy color intense yellow diamonds that is used to distinguish them from diamonds with a “cape” spectrum. Diamonds referred to in the trade as “canary yellow” are highly valued for their saturated yellow color. 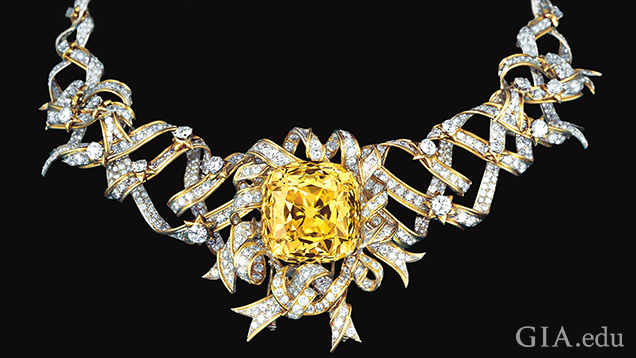 There’s an inexplicable allure about diamonds that fascinates the gem lover. As early as 1676, accounts by the French traveler and gem dealer, Jean-Baptiste Tavernier, mentioned seeing a 137.27 ct yellow diamond that he referred to variously as the Florentine, the Austrian Yellow and the Grand Duke of Tuscany. Since then, many notable color diamonds have been given the elite distinction of famous diamonds, particularly as the appeal of color became widespread.

The Tiffany Yellow Diamond was acquired by Tiffany & Co. in 1878 and has been on display for more than 70 years in its flagship store in New York. Under the direction of Dr. George Frederick Kunz, it was cut from a 297.42 ct rough stone to its present cushion cut of 128.54 ct, one of the largest known fancy yellow diamonds in the world. GIA graded it in 1984. 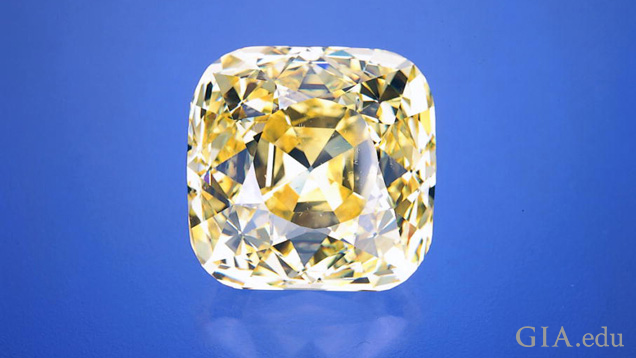 The Allnatt, 101.29 cts, is a famous Fancy Vivid yellow diamond that improved in color and value by being recut. Photo by Shane F. McClure/GIA

The Allnatt, a yellow diamond thought to have originated from the De Beers mine in South Africa, is named for its former owner, Major Alfred Ernest Allnatt, a British soldier and noted philanthropist who purchased the diamond in the early 1950s.

The diamond next appeared at Christie’s Geneva auction in May 1996 weighing 102.07 ct with a color grade of Fancy Intense yellow. It was purchased and then recut to 101.29 ct to improve color and clarity, going from Fancy Intense to Fancy Vivid with an improved clarity grade to VS2.

The Allnatt is a classic example of early 20th century cutting styles used to retain maximum weight and enhance the color of a well-formed octahedral rough crystal.

George Stepp, a logger from Carthage, Arkansas, found a yellow diamond crystal in the Crater of Diamonds State Park in Arkansas in 1972 and sold it to Kahn Jewelers in Pine Bluff, Arkansas, where it was left uncut to showcase its natural triangular pillow shape known as a macle crystal. “The Kahn Canary Diamond” weighs 4.25 carats and is internally flawless.

More than 33,000 diamonds have been found in the Crater of Diamonds State Park in Arkansas since it became a state park and opened to the public in 1977. The park has a “finders, keepers” policy that allows the public to dig for diamonds for a fee.