Christie’s and Sotheby’s, who control over 90 percent of top-end gem and jewelry sales worldwide, broke last year’s record by more than $140 million, aided by the Oppenheimer Blue, a Fancy Vivid blue diamond that sold for $57.1 million.

Francois Curiel, chairman of Christie’s Asia, said the market still was being driven by private buyers from Russia and Asia.

The first major stone to sell this past season was the 10.10 ct. Fancy Vivid blue De Beers Millennial 4 diamond. The stone was part of De Beers’ famed diamond collection of 10 blue diamonds that were exhibited at the London Millennial Dome in 2000. A gang of thieves crashed through the dome wall with an earth-mover and attempted to steal the collection on Nov. 8, 2000. The diamonds were housed in shatterproof glass cases, however, which proved to be the gang’s undoing – the police apprehended several members as they were trying to smash the cases.

After the exhibition closed some months later, De Beers sold the collection privately. The buyer of the Millennial 4 stone, a Hong Kong resident, consigned the GIA-graded diamond for sale at Sotheby’s April 2 Hong Kong sale, where it brought $32 million, or $3.2 million per carat. 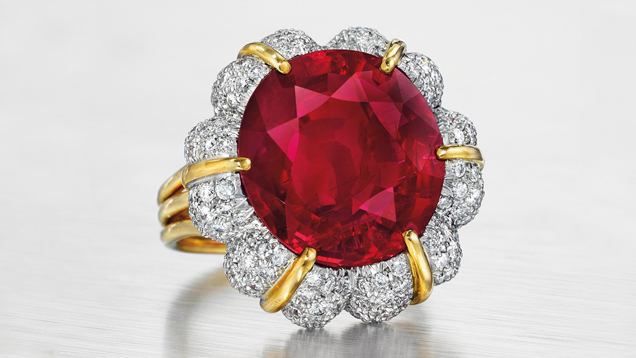 Several major gemstones changed hands at Christie’s in New York on April 20. The 15.99 ct. Jubilee Ruby, an unheated Burmese cushion cut, became the most expensive colored gemstone ever sold at auction in the U.S. when the high bidder paid $14.2 million for it.  Just before the ruby sold, another buyer paid $8.8 million for a 10.07 ct. Fancy Intense purple pink brilliant cut diamond and $7.2 million for a 40.43 ct. type IIa D flawless diamond. Both diamonds were graded by GIA.

A day earlier at Sotheby’s, one significant lot failed to sell. The 9.54 ct. Fancy Deep blue Shirley Temple diamond – presented to the child actress in 1940 – did not meet its $25 million reserve. Sotheby’s executives said they were confident they could sell the diamond in a private deal. 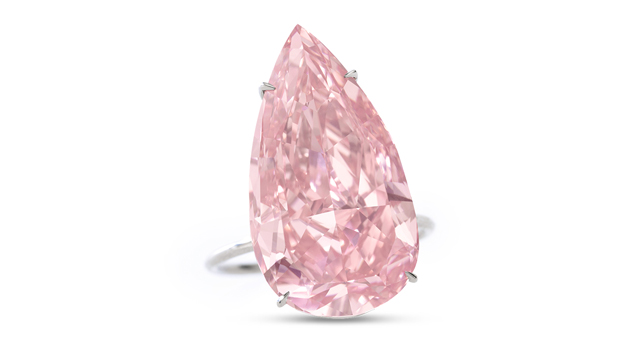 The "Unique Pink," a 15.38 ct. natural-color, Fancy Vivid pink diamond. Graded by GIA, the diamond is a pear modified brilliant with VVS2 clarity, and classified as a Type IIa diamond.  Photo courtesy of Sotheby’s

The highest total ever achieved at a single auction occurred on May 17 when Sotheby’s realized $175.1 million at its Geneva Magnificent and Noble Jewels auction. The highlight was the Unique Pink, a 15.38 ct. Fancy Vivid pink diamond that went to a private buyer for $31.6 million, a record for a stone of that grade. The auction also featured a 6.64 ct. Fancy Intense blue diamond brooch by Alexandre Reza that sold for $13.7 million. 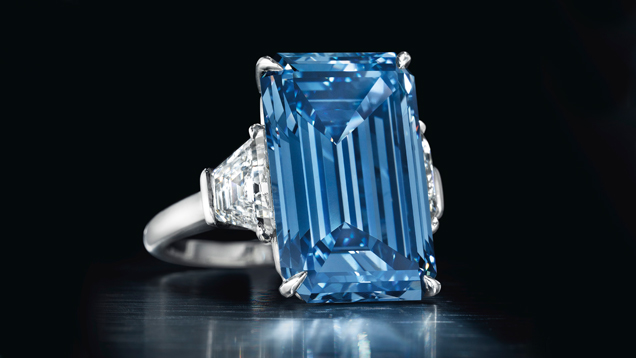 The Fancy Vivid blue rectangular-cut diamond, weighing approximately 14.62 cts. is flanked on either side by a trapeze-shaped diamond. It is mounted in the original platinum “Eight Shades” mounting from Verdura. GIA graded the diamond a Fancy Vivid blue, natural color, VVS1 clarity. Photo courtesy of Christie’s

While there are several diamonds carrying the Oppenheimer name, the 14.62 Fancy Vivid blue diamond that belonged to Sir Philip Oppenheimer was the one that took the title of the world’s most expensive gem ever sold at auction. The diamond, graded by GIA, was expected to sell at Christie’s May 18 Geneva sale for about $45 million, but the bidding reached $57.4 million in only 25 minutes. The buyer declined to be identified. That diamond accounted for about 40 percent of Christie’s sale total of $145 million that day, which would have been good for a world record two years ago. That auction also featured a pair of near-matching (11.96 ct. and 12.2 ct.) Fancy Vivid orange yellow ear pendants that sold for $11.6 million. 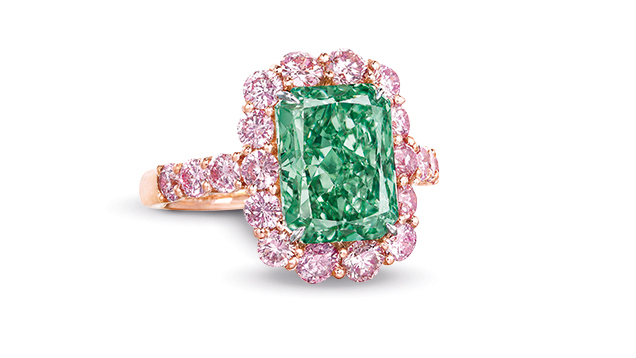 Customarily, the last major auctions are held in mid-to-late May but this was an unusual season. Christie’s added the 24.18 ct. Fancy Intense blue Cullinan Dream diamond to its June 9 New York sale, where it realized $25.3 million. The GIA-graded diamond was the largest of that grade ever auctioned and the first to be sold from a 122 ct. rough that was discovered several years ago in South Africa’s historic Cullinan Mine.

The Cullinan mine has been the source of many of the world’s largest diamonds, including the largest diamond ever found  – 3,106 cts., since the mine opened in 1903. 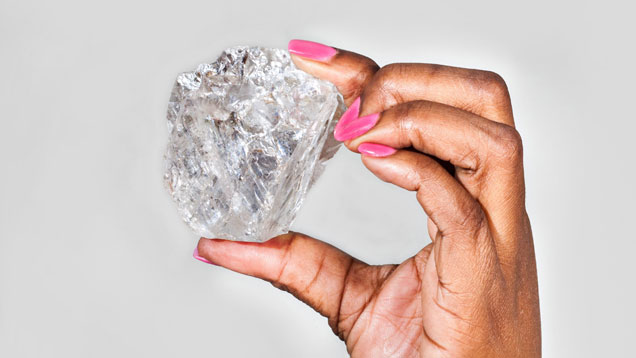 The second largest rough diamond ever found – the Lesedi La Rona – came last year at Lucara Diamond Corp., Kerowe Mine in Botswana. It was only the second gem-quality rough diamond ever to break the thousand-carat mark, weighing in at 1,109 cts. While mining companies usually sell rough diamonds through their own auctions or contract price sight sales, Lucara consigned the diamond and four other rough diamonds weighing just over 5 carats each to Sotheby’s for sale on June 29 in London, where it was expected to bring in excess of $70 million.

In what was supposed to be the climactic close to this record auction season, auctioneer David Bennett opened the bidding at $50 million and the price climbed slowly before stalling at $61 million. Bennett kept his hammer poised for several minutes announcing "last chance” before bringing it down and informing the audience that the stone failed to meet the reserve price and did not sell.