At the Spring Auctions:
A Spending Spree for the
Ultra-Wealthy

The world’s ultra-wealthy open their wallets even wider for the rare and fine in the first half of 2014. A Modigliani portrait sold for a record $18.4 million at Sotheby’s Paris auction in June, and a collection of wines went for $13 million at a Sotheby’s Hong Kong auction in April.

It’s no surprise that unheard-of auction records for diamonds and colored gems followed suit. Indeed, it’s fitting that the spring 2014 season also broke the record for a jewelry auction’s shortest stay at the top: less than 24 hours.

Economists note that the world’s wealthy have been putting more and more of their excess funds into such items and it’s buoyed the auctions’ bottom lines. Christie’s overall sales, with art leading the way, increased 27% for the first five months of the year, according to François Curiel, president of Christie’s Asia. Christie’s jewelry sales of $360 million were up 22% from the same period last year, doubling those of five years ago.

“The jewelry and fine art markets are expanding, attracting more buyers than ever before,” said Curiel. He added that 30% of Christie’s buyers this season were new, coming from all parts of the world.

Here is a roundup of this past season’s gem and jewelry sales.

Single-Auction Sales
Sotheby’s Magnificent Jewels sale on May 13 in Geneva realized $141.5 million, the highest ever at a single jewelry auction. That total surpassed the previous mark, Christie’s December 2011 Elizabeth Taylor auction, by more than $25 million. The following day, however, Christie’s regained the title with a Geneva jewelry auction that took in $154.2 million.

Individual Gems
Not surprisingly, a number of other records fell during these sales. The records came in a variety of colors.

Yellow Diamond: At the Sotheby’s auction, a 100.09 carat (ct) GIA-graded Fancy Vivid yellow from London jeweler Laurence Graff sold for $16.3 million, the highest price ever paid for a yellow diamond. This gem was one of the final stones polished by master diamond cutter Antonio Bianco, who died in 2009.

Blue Diamond: At Christie’s May 14 Geneva auction, the top lot was the Winston Blue, a 13.22 ct pear-shaped Fancy Vivid blue flawless diamond that brought the highest per-carat price ever paid for a stone of that color and clarity. The buyer, Harry Winston Corp., paid $23.8 million ($1.8 million per carat). GIA noted it was the largest flawless Fancy Vivid blue diamond it had ever graded.

Green Diamond: At the same Christie’s sale, a 5.5 ct. Fancy Vivid blue-green diamond, the Ocean Dream, achieved a record price of $8.63 million for a diamond of that color.

Natural Pearls: At William Doyle Galleries in New York on April 30, a bidder paid a record $3.3 million for a pair of natural pearl drop earrings thought to have once belonged to Empress Eugénie of France. They are believed to have been part of the French crown jewels sold off in 1887, seventeen years after the fall of Napoleon III. The previous high was for a pair of natural pearls owned by actress Gina Lollobrigida, which sold in May 2013 for $2.4 million. 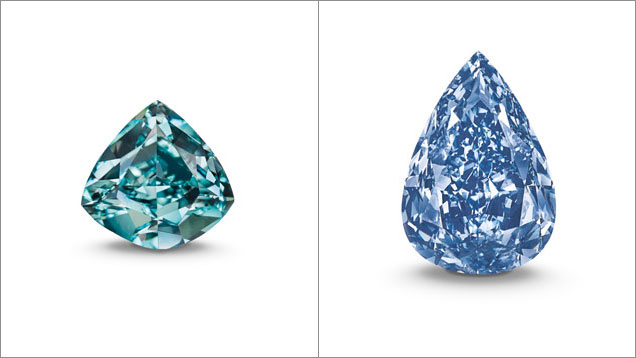 The 5.5 ct Ocean Dream, left, a Fancy Vivid blue-green diamond, sold for $1.4 million per carat, a record for a diamond of that color. The 13.22 ct Winston Blue, right, graded by GIA, sold for $1.8 million per carat, the highest price ever paid for a Fancy Vivid blue diamond of flawless clarity. (Photos not to scale.) Photos courtesy of Christie’s
Overall Auction Prices Remain Strong
Beyond these records, prices were generally strong across the board for colored gems and signed jewelry pieces from the world’s top jewelry houses.

Christie’s May 28 Hong Kong sale brought in $91 million. Some of the highlights were:
The sale also featured a number of large D-color flawless and internally flawless diamonds ranging from $188,000 to $191,000 per carat. Christie’s ended its season with a $27.5 million sale in New York, which included a 5.5 ct. GIA-graded Fancy Vivid pink diamond that accounted for more than one-third of that total—$9.6 million.

Not everything sold. The 31.34 ct Victory diamond, found in Africa in 1945 and formerly part of the Florence Gould estate, failed to reach its presale estimate of $5–$8 million at Sotheby’s Geneva May 13–14. Likewise, a necklace featuring the 40.05 ct type IIa D-flawless diamond called the “Eye of Golconda” did not reach its estimate of $8.5 million at Christie’s May 28 Hong Kong sale.

With the uneven economic recovery, these well-publicized auctions have not had the coattail effect seen in the past. The 1987 Jewels of the Duchess of Windsor sale, for example, “got the world emotionally involved in jewelry,” said one jewelry dealer, with an appropriately sharp upturn in demand for gems across the board. This time, sales of more mundane-sized diamonds and jewelry have not seen a surge in prices or sales growth at retail stores around the world.

Still, these impressive auction prices have increased popular awareness of fancy-color diamonds and added to the mystique and allure of gemstones. That could serve the entire industry well as the world economy achieves a more secure footing. 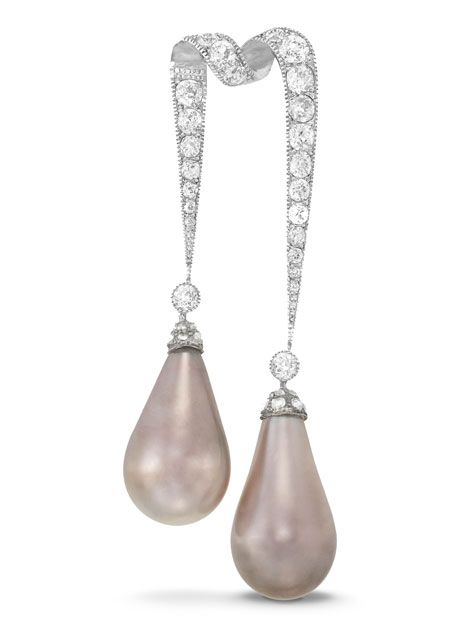