Most gemologists are accustomed to fielding questions on the fly about gemstones, but not many do it under the bright lights and across the broad reach of live television.

For Nancy Hornback, a popular program host at QVC who specializes in gems and jewelry segments, every day is a televised pop quiz in gem knowledge.

“I am constantly approached by friends and work associates who have questions about gemstones, and I get a lot of interesting questions from viewers live on the air,” says Hornback, a GIA Graduate Gemologist who’s been with the network since 2009. “I get asked a wide variety of questions regarding gemstone properties, the colors, the durability, the history and folklore, and how to care for them.”

Hornback invests hours of planning and research into every segment she hosts for QVC, a video and e-commerce retailer that reaches more than 100 million homes in the U.S. alone. During those programs, she’ll often chat with a special guest about the gemstone or jewelry design on air and invite viewers to call in with questions and personal stories.

“I love being able to provide education to others about gemstones and enjoy fielding the wide variety of questions I get,” she says.

She has to be ready for whatever comes her way, and since earning her diploma at GIA’s New York campus in 2014, the woman who says she was “born to perform” feels much more secure that she has the knowledge to back up her camera-ready presentation.

“Having my GIA education gives me confidence,” she says. “I’m able to describe gemstones that come from the same family that display different properties, or other ‘nuggets’ of information to explain what makes the stones precious, or the different phenomena that occur within them.”

I can’t stress enough how important it is to continue to educate yourself … Keep your knowledge fresh. If you are passionate about gems and jewelry – just go for it!

Though Hornback’s GG credentials are recent, her love affair with gemstones goes back to her childhood in Indianapolis. Her family, avid campers in the woods and creeks around southern Indiana, also made annual ski trips to Colorado. Gemstones often figured into their outdoorsy vacations.

“I remember being fascinated to discover geodes and being delighted by the mysterious colors and designs formed by the crystallized minerals,” she says. “At first you think it’s just a drab rock, but when you crack it open, it bursts with colorful designs – just like magic! And as I grew, my fascination continued. I recall how romantic it was for my dad to give my mom a distinctive piece of gemstone jewelry for special occasions and milestones.”

Hornback pursued a career in music, earning both a bachelor’s and master’s degree in music from Indiana University. She was singing at Opryland, studying to be an opera singer, appearing in off-Broadway productions – even starring as Belle in Walt Disney World’s production of “Beauty and the Beast” – when a diagnosis of vocal polyps confirmed that her professional musical ambitions would not be possible. 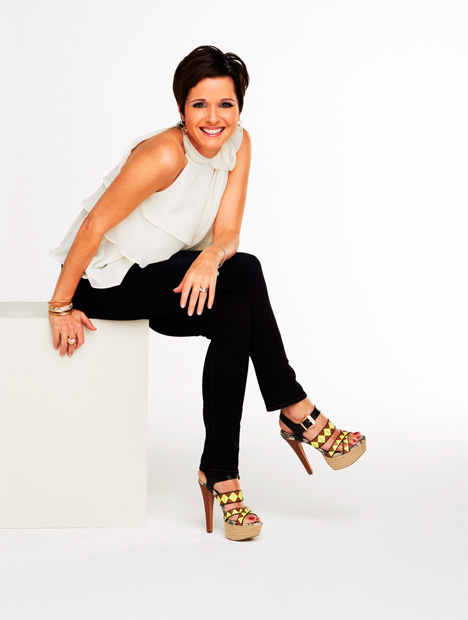 “I think that giving a gift of jewelry is so personal, especially when you give a piece that has meaning and explain the story behind why you picked it,” says Nancy Hornback, who still has the first turquoise piece her parents gave her. “It’s memorable when someone says something as simple as, ‘The color of this topaz reminds me of your eyes.’ Every time you wear the piece, you remember its significance and the person who gave it to you.” Photo ©QVC


Her next role, though not musical, would prove to be a breakout: offered a position at televised retailer Gems TV, Hornback soon found herself presenting 60 gems a day, from the ubiquitous to the very rare. She was completely immersed in the world of gemology. Wanting to learn more, Hornback enrolled in the Accredited Jewelry Professional program through GIA’s Distance Education.

“It gave me so much confidence in my work, but never in my wildest dreams did I think I would pursue the graduate gemology diploma,” she says.

That all changed one night in 2012, when Hornback – who had since moved to QVC – had a special on-air guest who would give her the courage to jump in.

“I hosted a special QVC show that featured jewelry inspired by the 10,000 gems and 350,000 minerals in the Smithsonian National Museum of Natural History’s National Gem Collection,” Hornback says. “My guest was gemologist Christine Webb, a veteran of the gems and minerals department in the museum. After the show, we chatted and I told her how I admired her knowledge and expressed my desire to dig deeper and learn more about gemstones. She urged me to study to earn a GG. She told me she had complete faith in me and knew I could do it.”

Inspired by Webb’s encouragement, Hornback went home, opened her computer at 3 a.m. and started researching her options. Initially concerned about how she could fit studies into a hectic career and family schedule, she realized that with the exception of three lab classes – which she could take on campus in New York – everything could be done at home.

“I got started immediately,” Hornback says. “I loved taking the deep dive to learn about gemstones, the jewelry design industry, and how the mining operations began. I was fascinated to learn how gems were formed, and the trace elements that make them exhibit certain colors and properties. It was such fun … and learning how to distinguish synthetic gemstones from authentic ones made me realize how critical it is to insist on high ethical standards in our industry.”

Hornback, who cites instructors like Richard Greene as being a great source of knowledge and experience, believes that GIA’s education options make it possible for anyone to balance their studies with work and family.

“I can’t stress enough how important it is to continue to educate yourself … Keep your knowledge fresh,” she says. “You can accomplish your studies within your own timeframe. Stay focused, and move through your classes consistently. If you are passionate about gems and jewelry – just go for it!”

Among the collection assembled by Dr. Edward Gübelin are a number of uncommon gemstones from many worldwide localities.

Although colorless when chemically pure, zircon is typically yellow-brown to brown. It also comes in red, blue, purple, and green. Because of its high brilliance and dispersion, colorless zircon has sometimes been used as a substitute for diamond in jewelry.