Over the Top at BaselWorld 2015

The BaselWorld Fair in Switzerland is a trade show unlike any other; Fifth Avenue-sized structures line the aisles, two-story high LED screens tout world-famous luxury brands and, at closing each evening, champagne and hors d’oeuvres help seal the deal between company and client.

BaselWorld, originally conceived as the yearly coming out party for the top Swiss watch brands, has evolved into a showcase for the world’s high-end jewelry brands and the diamond and gem dealers who serve them. One of the reasons for such an all-out presence is that BaselWorld is unique among trade shows because the public can buy a day pass for 60 Swiss francs (US $62) to browse all four event halls and revel in the ultra-luxury atmosphere.

Who attends? More than 125,000 visitors: everyone from families on a costly outing to gaze at the new watch offerings to billionaires on a buying spree.

The tour begins on the second floor of the main hall, appropriately called the Hall of Dreams.

On the street of jewels in this hall Graff, Garrard, Bulgari, Harry Winston, Mikimoto, Faberge, Damiani and Chopard compete for buyers’ and browsers’ attention. Lesser-known brands such as Jacob & Co., De Grisogono, Bayco and Aaron Shum spare no expense to match their glitz. 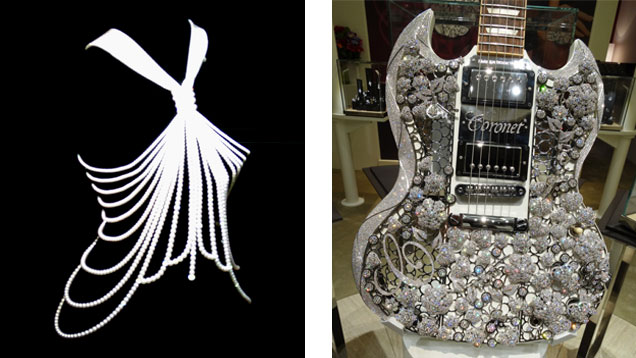 Extraordinary designs are on display in the Hall of Dreams. Mikimoto, which originated the cultured pearl market more than 100 years ago, offers a pearl-encrusted bodice, left, that is in striking contrast to the kaleidoscopic atmosphere of its surroundings. This $2 million diamond-studded Gibson guitar from Aaron Shum Jewellery, right, won’t make you a rock star, but it will certainly sparkle under stage lights. Photos by Russell Shor/GIA
Jacob & Co., from Geneva, sits at the corner in a Roman Forum-style “building” fashioned in white faux marble. Evening gown-clad models pose in the open foyer to show off the company’s creations: lacey, diamond-accented necklaces and bracelets, along with more traditional large diamond and sapphire pieces. Nearby, Mikimoto counters the models’ glamour with a cultured pearl “bodice” which, in the special lighting, seems to float inside the window, the gems’ iridescence glowing against the black background.

Around the corner, Aaron Shum attracts a crowd with a $2 million diamond and platinum guitar by Gibson, the U.S. instrument manufacturer. Called the Coronet, the guitar features just over 400 carats of small colorless diamonds set in 18K white gold clusters shaped like flower blossoms set close-in so they don’t snag your sleeve when you’re trying to make bar chords. 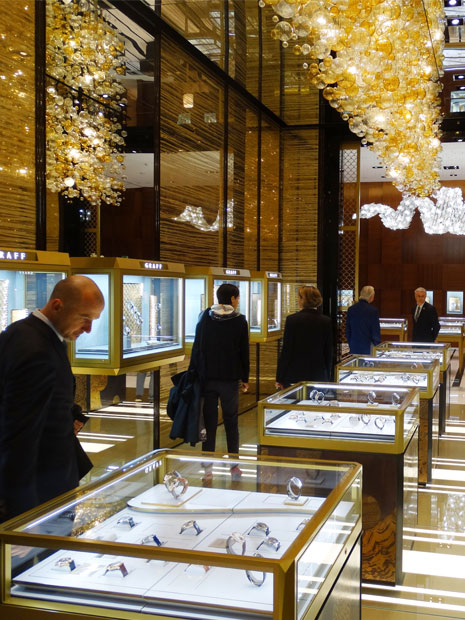 Golden lights lead buyers past the watches in Graff’s space to the jewel room, which is illuminated by a “diamond bracelet.” Photo by Russell Shor/GIA
If a $2 million guitar isn’t impressive, then Graff’s space, catty-corner across the atrium, certainly is. The two-story structure is covered in gold Art Deco scales, with a window-sized LED panel displaying the company’s watch creations. Inside, a long row of gold-colored ceiling lights, which look like clusters of crystals suspended in a line, lead browsers past the watch cases to the inner sanctum. A swirling light feature that resembles a diamond bracelet marks where the diamond pieces reside. This year’s signature piece, “The Fascination,” a watch that incorporates 152.96 carats of D color diamonds, includes a 38.13 carat pear-shaped diamond that can be worn separately as a ring or clipped to cover the watch dial. For $40 million, time will wait for you.

Heading for the escalator that leads down to the main watch hall, an intense red glow from the Bayco “building” attracts a crowd. The glow comes from a back-lit ring that features a 16 carat Mozambique ruby, surrounded by diamonds.

The watch hall on the ground floor is actually a misnomer because some 1,500 watch brands are scattered throughout the five sections of the fair. This, however, is where the most famous brands congregate: Rolex, Swatch, Omega, Breitling, Corum, Hublot, Tissot and several dozen others. The exhibits are even more extravagant, and much larger, than those on the jewelry floor, though getting close enough view these timepieces is like is like trying to glimpse the Mona Lisa at the Louvre.

The watch hall attracts the majority of the 125,000 visitors to the fair, so it’s often difficult to catch a glimpse of the new styles they roll out each year. Photo by Russell Shor/GIA
The Swiss Watch Federation reports that the soaring Swiss franc has added 20% to the cost of its watches, further threatening export growth that had already slowed as China’s economy softens and middle-eastern buyers pull back.

The crowds here are thick enough to slow the passage to the Hall of Minerals, the area behind the watch pavilion where the diamonds and gemstones are displayed more like a traditional trade show. The exhibits are relatively no-frills – no elaborate exhibits or 20-foot-high LED screens – as opposed to the glitzy world capital main street. But the goods are certainly not no-frills and a million dollars (or francs) will only get you so far.

Near the entrance, Bijan & Co. offers a 200.36-carat cushion cut sapphire set in a necklace with 35 carats of D, E and F color diamonds. “We cut this several months ago,” says Eliot Elihu, president. “We’re debuting it at this show.”

The question: “A million?”
The reply: “Somewhat more.” 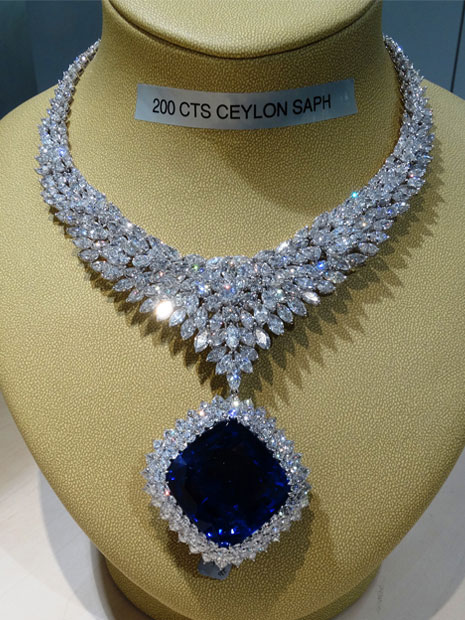 This 200.36 carat Sri Lankan sapphire by Bijan & Co., greeted visitors near the entrance to the gemstone hall. Photo by Russell Shor/GIA
Proceeding through the hall, past a vendor displaying another 200-carat Sri Lankan sapphire, there is Taché, the venerable Antwerp diamond company. On display is a simple black presentation box holding a collection of 9 Type IIa (extraordinarily transparent) diamonds of various shapes, ranging in weight from 16 to 41 carats. All of the diamonds are D Flawless., the exceptions being a pair of matched D-E color, Very Very Slightly Included cushion brilliant cuts.

Though the asking price probably matches or surpasses Graff’s “Fascination” watch, Isaac Taché, executive director, won’t provide a number, “except for serious buyers.” He does say the collection took years to put together.

“Matching diamonds like these don’t come along very often,” he says. 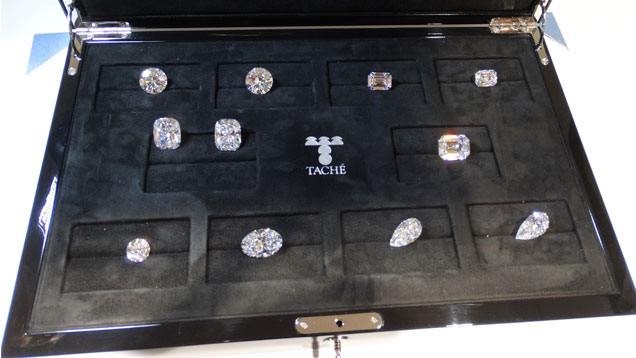 Taché collected a crowd at its display with this collection of 9 Type IIa (extraordinarily transparent) diamonds of various shapes, ranging in weight from 16 to 41 carats. All of the diamonds are D Flawless., except a pair of matched D-E color, Very Very Slightly Included cushion cuts. Photo by Russell Shor/GIA
The array of gems at Cody Opal don’t carry seven-figure price tags, but some of the opals on display in the front of the showcase are large enough to make you want to live inside their lush blue-green, play-of-color world.

“We usually do well here,” says Andrew Cody, holding a large black opal with its miniature environment dappled with spots of red. "The red is what they look for, what really sets the premium.”

Move past exhibitor after exhibitor displaying 10 carat-plus fancy yellow diamonds and arrays of large colorless diamonds, until you come to a necklace created from 30 fancy Vivid Pink diamonds and 23 fancy Vivid Blue diamonds, all ranging from 0.75 to 0.90 carats. You have to stop and ask about this one, but the vendor, set in a relatively small enclosure in a row behind the main aisle, wants no pictures taken or publicity using his name.

“Our clients know we have this here,” he says.
The price: “It took us years to collect these stones, so you can understand that it has a price to match,” he explains.

Negotiating all those major diamond and gemstones can work up a thirst. The snack bar in the middle of the hall has some enticing, but small, water bottles on display for 6 Swiss francs each. A sandwich? Think tourmaline price.

In the end, there was not great demand for the high-end treasures at Basel this year. But a tour at the end of the show revealed that many of these one-of-a-kind pieces did find buyers, judging by some of the empty spots in the displays.

Beauty has its price and some are always willing to pay it.
About the Author

The BaselWorld show attracts tens of thousands of visitors each year to see the new offerings from leading watch, jewelry and gem companies.

Basel GemFest: Synthetic Diamonds Getting Better, But so is Detection

Experts from GIA and De Beers joined together at the March 2015 Baselworld exhibition.